agåtña, uam—Before the Taliban toppled the US-backed government of Afghanistan, refugee advocates and government insiders had been calling on President Joe Biden to take steps to evacuate Afghans at risk of violence. They offered resources, ideas, and expertise, but for months they received no response. The State Department sluggishly issued “special immigrant visas” for those who had helped the US military, seemingly with no plan for what to do with the tens of thousands of SIV applicants—and those facing persecution who don’t fall under SIV parameters—who would be stranded in Afghanistan when the US troops were gone.

This article was published with support from Columbia University’s Ira A. Lipman Center for Journalism and Civil and Human Rights.

Among those willing to help was Governor Lourdes Leon Guerrero of Guam, a US territory in the Western Pacific. On June 12, she sent a letter to Biden. “Guam has stood ready to serve as a safe and secure route for this type of humanitarian effort throughout our history,” she wrote. “And today, it is no different. I assure you that my administration is prepared to assist” should Biden call on Guam to provide safe haven to refugees. She was echoing a plan advocates had been calling for since the spring: the “Guam option,” which would work around immigration bureaucracy by having the military airlift refugees to the island while they waited for their US visas or for another country to take them in. But the White House ghosted Leon Guerrero, too. After sending the June letter, the governor received “no formal written response,” according to a spokesperson.

On August 14, hours before the Taliban marched into Afghanistan’s capital and the first harrowing scenes at the Kabul airport unfolded, the federal government finally began contacting nongovernmental groups, coordinating more deliberately between agencies, and revving Operation Allies Refuge into overdrive. Chaos predictably ensued, and the evacuation of Afghanistan is ramping up when it should be nearly complete. Amid the ongoing, deadly pandemonium, advocates have wondered why Washington continuously ignored proposals like the Guam option. Arash Azizzada, an organizer with Afghans for a Better Tomorrow, a diaspora activist group, told me, “The Biden administration’s steadfastness in refusing to consider or take action that would mirror the Guam option is costing precious Afghan lives that are at risk with every passing hour.”

Guam is a major military hub. Housing both Air Force and Navy bases, as well as scattered associated facilities, the island holds immense military logistics capabilities—which the United States has employed in the past to facilitate the same kind of end-of-war mass evacuations advocates have been shouting for.

“Guam makes a lot of sense,” said Adam Weinstein, a research fellow at the Quincy Institute for Responsible Statecraft, which, with 15 veteran groups in May, sent a letter to Biden that outlined a history of wartime evacuations to Guam and urged him to use the Department of Defense to “begin the project of protecting” vulnerable Afghans. Weinstein added that “the administration was concerned about bringing people into US territory who might end up in legal limbo.” But that has never been a prohibitive issue in the past.

In 1975, as the North Vietnamese army bore down on Saigon, the US military evacuated nearly 112,000 Vietnamese refugees to Guam. Dubbed Operation New Life, the effort involved a task force of federal agencies, which employed an array of legal maneuvers to transport the Vietnamese to Guam, process them there, and eventually admit them into the continental United States as refugees. Unlike Biden, who is already trying to limit expectations on the number of people the US will evacuate from Afghanistan, the New Life task force swept up broad swaths of people from Vietnam (even some who didn’t want to leave) in an attempt to save face after military defeat, offering them safe haven in the nearest US territory.

Twenty years later, during Operation Pacific Haven, Guam again played host to transient refugees, this time about 6,600 Iraqis who fled Saddam Hussein’s army as it advanced on the previously US-protected Kurdish north. Again, the military didn’t need to wait for visa paperwork before the evacuation—the Iraqis were processed on Guam.

Though large endeavors, the evacuation phases of New Life and Pacific Haven weren’t particularly difficult or costly. The Center for American Progress puts the price of the operations at less than $17,000 and $2,500 per person in 2021 dollars, respectively. A mass evacuation from Afghanistan to Guam would have been similarly doable: An April report from the Truman Center estimated it would cost less than $10,000 per person for “70,000 US-affiliated Afghans who face acute threats from the Taliban.”

Guam would also have been in a peculiarly good position to host refugees from Afghanistan—which has dispersed less than five Covid-19 vaccine doses per 100 people—in a relatively pandemic-safe manner. As part of the United States, Guam is on the favorable side of the global vaccine divide, with about 80 percent of the island’s eligible population fully inoculated. And with a surplus of doses, the territorial government recently launched a vaccine tourism program, through which those with the means to travel from countries with less vaccine availability can get their shots on Guam while quarantining at one of the island’s still relatively vacant resort hotels. According to the Guam Visitor’s Bureau, more than 1,800 travelers have been vaccinated since early June, and there are no signs the program is approaching capacity.

Most importantly, many Guam residents said that they were ready and willing to help with the Afghanistan evacuation effort. After Leon Guerrero sent her June letter to Biden, others from across the island’s political landscape chimed in to support the idea. Several local legislators and Guam’s congressional delegate expressed their willingness to temporarily host the refugees. Guam businesspeople summited to advocate for the territory as a transition site. And members of the Fanohge Coalition, an alliance dedicated to self-determination for Guam’s Indigenous CHamorus, proclaimed solidarity with victims of the fallout of US war in a Pacific Daily News op-ed: “Without any choice in the matter, we nonetheless welcomed thousands [of Vietnamese and Kurds] with open arms and our uniquely CHamoru generosity and hospitality,” they wrote. “We would act no differently in welcoming our Afghan brothers and sisters.”

But Guam’s welcome chorus also got the silent treatment from Biden. After receiving no response to her letter, Leon Guerrero traveled to Washington to meet with federal officials about immigration issues; during that trip, an undersecretary with the Department of Homeland Security “expressed her sincere appreciation” for Guam’s “proactive support and willingness to assist in the Afghanistan evacuation efforts,” per a press release from the governor, but according to the spokesperson, “no updates were provided on Afghan relocation.” As of this publication, there were still no updates. Biden hasn’t publicly addressed the idea of using Guam to process refugees, and has falsely claimed that “the law doesn’t allow” him to bring Afghans to the US without visas. 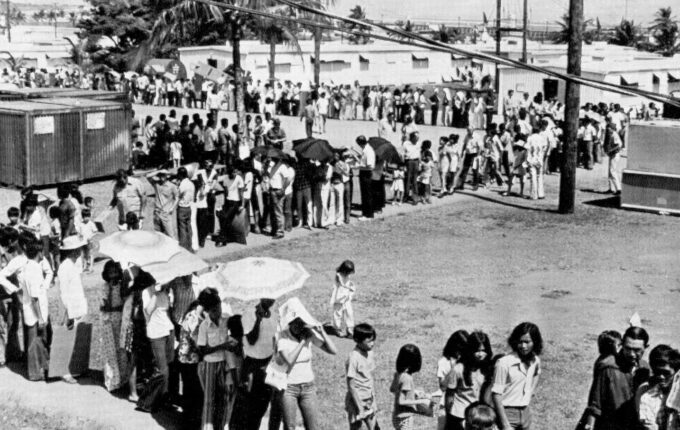 A line of Vietnamese refugees winds around the streets of "Tin City" as they queue up for their food Saturday, April 26, 1975. "Tin City" is a compound of metal buildings at Andersen Air Force Base in Guam. (Associated Press)

Biden’s negligence toward refugees of US war, despite the offers of Guam residents, is telling—especially given the heavy military footprint on the island.

In addition to Air Force and Navy facilities, which take up nearly a third of the 212-square-mile island, Guam is the site of a massive ongoing troop reshuffling—“unprecedented in peacetime,” according to the military—which will see it receive 5,000 Marines. As part of the relocation, Guam, along with the Northern Mariana Islands, a US commonwealth on the same archipelago, will also host destructive live-fire exercises.

The military buildup on Guam is being met with a stalwart resistance, especially from Indigenous CHamoru groups who are protesting the havoc that construction of a Marine Corps base, a live-fire training range complex, an aircraft carrier berthing station, and other new facilities are wreaking on their island. They’ve documented how the buildup threatens their water, plants, cultural sites, recreational areas, and ecosystems. And they’ve organized, protested, and sued to mitigate the worst effects of a larger US military presence, recognizing bleakly that, as a colony with only about 170,000 residents, they have little recourse to halt it outright.

Although the buildup began under the administrations of George W. Bush and Barack Obama, its impetus—increasing the military’s capacity to confront China—is central to Biden’s foreign policy plans. And his tough-on-China rhetoric has translated into the Pentagon’s aggressive posture toward Beijing. Guam, as the US territory closest to East Asia, has long been called the “tip of the spear.” Since Biden came into office, the island has played a role in several massive war games, including a 17,000-person amphibious assault exercise, an unprecedented Air Force maneuver, and a land war exercise. On Guam, the Biden administration seems more focused on using military resources to fan the flames of the next war than on using them to mitigate the crisis stemming from the US’s longest one.

The US withdrawal from Afghanistan was always going to be messy. But if Biden had listened to advocates, consulted historical precedent, and perhaps considered the humanitarianism that Guam had offered, many more Afghans might be safe right now.