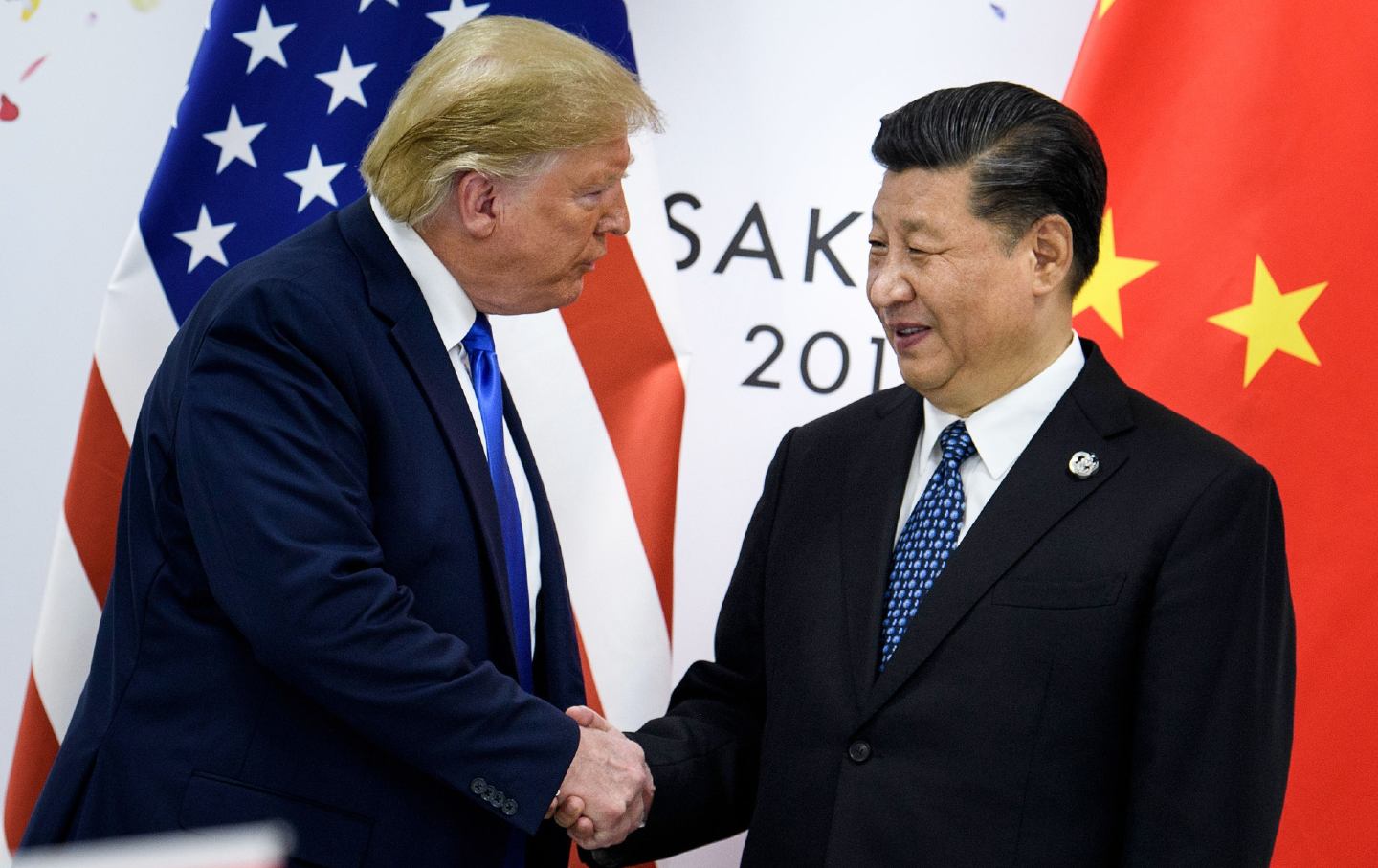 Xi Jinping shakes hands with Donald Trump before a bilateral meeting on the sidelines of the G20 Summit in Osaka. (Brendan Smialowski / AFP via Getty Images)

Even if the Covid-19 pandemic hurts Donald Trump’s political fortunes, it will almost certainly energize Trumpism as an ideological project. Any electoral drubbing Trump receives in November for his grossly incompetent handling of the crisis could be outweighed in the long run by Trump’s version of authoritarian anti-globalism’s becoming more plausible in future contests. Trump won in 2016 on a nationalist platform consisting of protectionism, opposition to immigration, and foreign policy unilateralism. The underlying thread of these policies was xenophobia, in keeping with Trump’s racism. Trump promised to protect white America from trade agreements with foreign nations, competition from foreign workers, and the machinations of foreign institutions (like NATO and the UN).

With the Covid-19 crisis, this America First agenda has a perfect event to stoke nationalist paranoia. As conservative columnist Ross Douthat noted in The New York Times on March 31, this is a “world crisis tailor-made for an anti-globalization, anti-deep-state worldview—a crisis in which China lit the fuse, the World Health Organization ran interference for Beijing, the American public health bureaucracy botched its one essential job, pious anti-racism inhibited an early public-health response, and outsourcing and offshoring left our economy exposed.” Given how perfectly the crisis lined up with the anti-globalist worldview, Douthat was surprised that his fellow right-wingers, including Trump, were pretending that Covid-19 was no big deal.

Trump initially stumbled in his political response to Covid-19. Until March, he downplayed the dangers of the pandemic, seemingly in the hope that he would luck out and it wouldn’t spread to the United States or would quickly taper off on its own. But as the pandemic has intensified—with each day now bringing thousands of deaths—he’s taken the exact anti-globalist stance Douthat outlined by blaming both China and the World Health Organization, seizing medical equipment that had been sold to countries like Germany and India, and accusing the Democrats of being too politically correct in their denunciation of anti-Chinese racism.

Nor is Trump the only politician who is intensifying nationalism during the crisis. All over the world, governments are erecting stronger borders and looking for ways to produce medical equipment at home rather than rely on an increasingly fragile global supply chain.

The coronavirus pandemic could be the straw that breaks the camel’s back of economic globalization. China’s growing economic and military power had already provoked a bipartisan determination in the United States to decouple China from U.S.-sourced high technology and intellectual property and try to force allies to follow suit. Increasing public and political pressure to meet carbon emissions reduction targets had already called into question many companies’ reliance on long-distance supply chains. Now, COVID-19 is forcing governments, companies, and societies to strengthen their capacity to cope with extended periods of economic self-isolation.

As Niblett’s comments indicate, opposing economic globalization isn’t exclusively a position of the nationalist right. Economic globalization has been pushed by corporate interests who have used trade agreements to entrench the power of capital, often at the expense of both labor unions and environmentalists. For that reason, many on the left, including Bernie Sanders, are proud anti-globalists.

What’s novel in the current situation is that business elites are starting to echo their criticism of globalization. The case for decoupling from China is gaining traction not just in military circles but also among business elites. Bloomberg reports, “Businesses are reassessing China’s role in global supply chains, and by the time this virus burns out, many of them will have started planning to relocate at least some of their production elsewhere. Deglobalization is accelerating.”

Globalization shouldn’t be confused with internationalism. In his campaign, Bernie Sanders articulated an anti-globalist position that would redress the flaws of trade agreements, while also seeking to work more closely with other nations and international organizations like the United Nations to deal with issues of planetary import like climate change.

Sanders’s combination of anti-globalism with robust internationalism has only become more attractive in the wake of the pandemic. After all, even if global supply chains are disrupted, the need for nations to cooperate is all the more important during the crisis. Medical knowledge needs to be shared quickly, as scientists all over the world gain new insights into how the virus spreads and what treatments work. Covid-19 travels so quickly that no nation can be safe unless it is fought everywhere. Once scientists figure out which treatments work, or even develop a vaccine, there will have to be a massive program of international aid to share these discoveries as widely as possible.

Joe Biden, the presumptive Democratic nominee, lacks Sanders’s nimbleness in emphasizing both anti-globalism and internationalism. As on so many issues, Biden remains yesterday’s man, a 1990s liberal for whom globalism and internationalism are allied. Biden has long supported the trade agreements that underwrite globalization. Financial Times columnist Janan Ganesh accurately describes Biden as “the last, best hope of globalists.”

Biden’s unwavering commitment to globalization can be seen in his response to Trump’s demagogic attacks on the China question. John McLaughlin, a Trump campaign pollster, told Axios, “China is among many weaknesses for Joe Biden, but when people learn about Biden’s attack on the president’s China travel ban, his other weak positions on China, and his conflict with Hunter Biden’s business deal with China, voters are horrified.”

Biden’s campaign plans to respond to these accusations by arguing that Trump himself has been weak on China. In a memo made public by Axios, the Biden campaign contends:

We’d say Trump is weak on China, but that’s an understatement. Trump rolled over in a way that has been catastrophic for our country. He did nothing for months because he put himself and his political fortunes first. He refused to push China on its coronavirus response and delayed taking action to mitigate the crisis in an effort to not upset Beijing and secure a limited trade deal that has largely gone unfulfilled. Trump’s response to the virus was delayed by a desire to avoid upsetting China as he sought a deal to begin undoing the damage caused by his trade policies.

As a political argument, these claims have the fatal weakness of being far too complicated. They attempt to thread the needle by defending Joe Biden’s pro-globalization position while also arguing that Trump is submissive to China. They rely on a narrative that acknowledges that Trump tried to remake trade relations with China but failed, and as a consequence became reluctant to challenge China about the coronavirus. This narrative might be true—but it’s hard to put on a bumper sticker. Trump’s campaign, by contrast, has a handy slogan: “Beijing Biden.”

The Biden campaign would be better advised to stick to arguments that are quick and true: Trump bungled the response to Covid-19, leading to many thousands of unnecessary deaths. Trump’s fawning over Xi and alienation of democratic allies shows his love of personal diplomacy—an approach that is dangerous when the world needs strong international institutions. If international organizations like the WHO are too subservient to China, that’s a byproduct of Trump’s unilateralism, which only isolates America.

There are plenty of ways of attacking Trump’s reckless nationalism without being tied down by the baggage of a discredited globalism. Alas, Biden seems to want to carry those hefty bags into the presidential election.