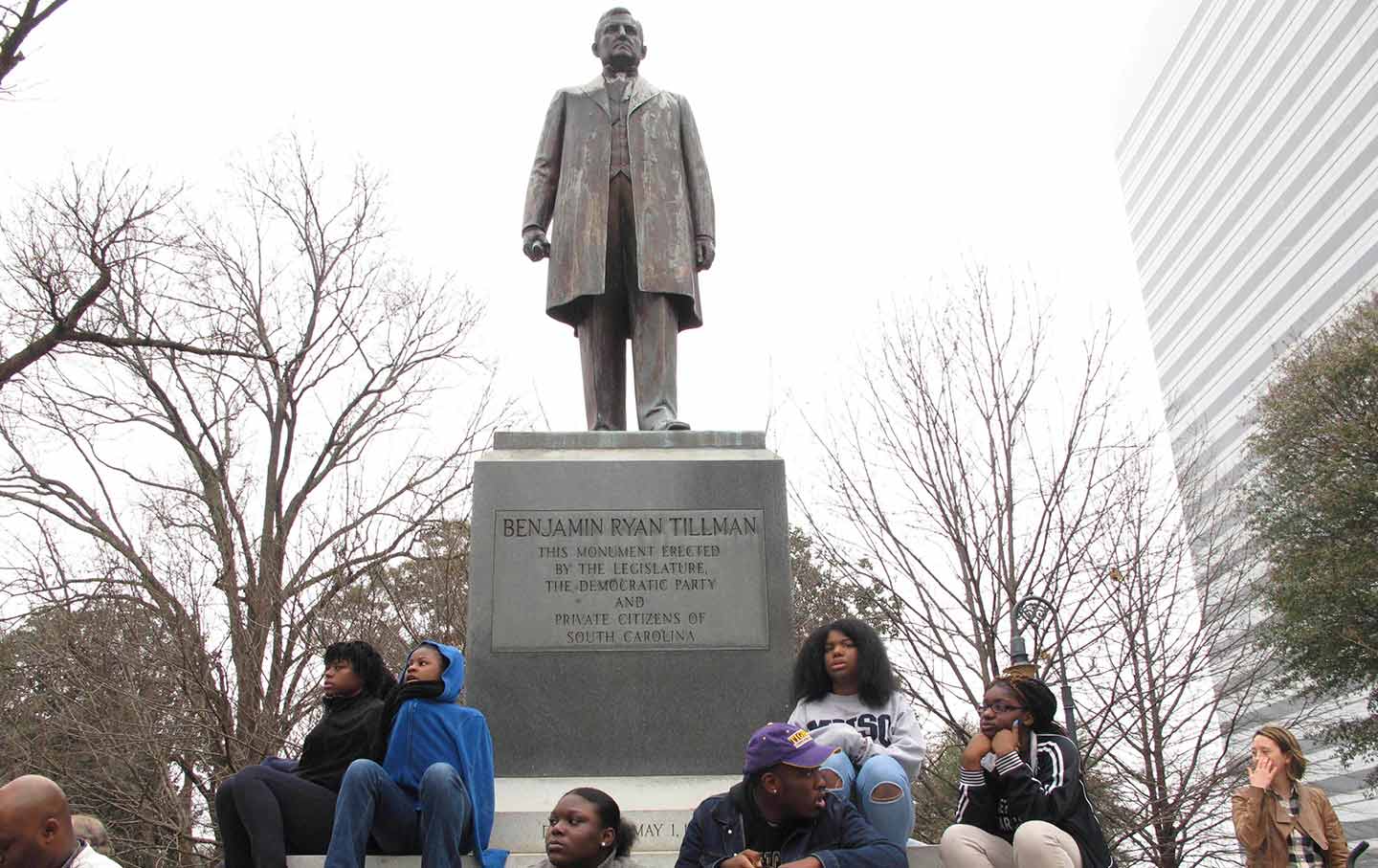 Benjamin Tillman, the scion of a rich, slaveholding South Carolina family, was elected governor of the state in 1890. Driven by his fury over Black emancipation and enfranchisement after the Civil War, he dedicated his political career to spreading what he dubbed “the gospel of white supremacy according to Tillman.” At every opportunity, he stoked anti-Black violence, once stating that “nothing but bloodshed and a good deal of it could answer the purpose of redeeming the state from negro and carpetbag rule” and boasting of having “shot negroes and stuffed ballot boxes” as a leader in the Red Shirts, a white terrorist group that executed six African American freedmen in the 1876 Hamburg Massacre. His appeals to white South Carolinians’ racial resentments got him elected to the US Senate in 1894. Before heading to Congress, where he would serve for 23 years, Tillman essentially rewrote South Carolina’s Constitution, ending Reconstruction-era Black political influence and stripping Black folks of the right to vote.

“We of the South have never recognized the right of the negro to govern white men, and we never will,” Tillman declared in a 1900 speech. “I would to God the last one of them was in Africa and that none of them had ever been brought to our shores.”

South Carolina’s all-white legislature honored Tillman in 1940 by casting his likeness in bronze, erecting the eight-foot statue on the Capitol lawn, where it remains, a message of white power and racial terrorism sent straight from the state government. The inscription on the figure’s pedestal lauds him for his “life of service and achievement,” fondly remembering him as a “friend and leader of the common people [who] taught them their political power.”

Absent are any of Tillman’s most famous quotes, including his 1892 claim that he would “lead a mob in lynching a Negro” and his gubernatorial inauguration declaration that “whites have absolute control of the state government, and we intend at any and all hazards to retain it.” South Carolina officials seem to have taken pains to minimize his record of racist violence, suggesting they knew that legacy—and their celebration of it—was shameful. Like the more than 750 Confederate monuments that venerate those who fought to keep Black people enslaved, the Tillman statue proves the vigorous effort undertaken to whitewash American history of the legacy of anti-Black racial oppression and terrorism.

The back draft of historical revisionism always explodes when movements for social justice threaten to upset the status quo. The Tillman statue went up just as the NAACP was fighting for laws against lynching around the United States and as Black demands for basic civil rights were swelling. We are facing a similar moment today. In reaction to protests against racism and the removal of white supremacist statuary across the country, Donald Trump has launched a deliberate effort to suppress and sanitize America’s history. He has derided The New York Times’ 1619 Project, a Pulitzer Prize–winning essay series that examines the way slavery has shaped every American institution (and which he has definitely not read), likening it to anti-American propaganda and calling it “ideological poison” that “will destroy our country.” He has attacked the teaching of critical race theory as a “form of child abuse” and demeaned it as “a sickness that cannot be allowed to continue.” The president has pledged to withhold federal funds from schools that incorporate the 1619 Project into their curricula and has demanded the cancellation of racial sensitivity trainings for federal employees, directing agencies to halt spending on programs that examine white privilege. According to a tweet from Russ Vought, the director of the Office of Management and Budget, Trump “has asked people to report any sightings” of critical race theory. Recently, Trump announced that he is launching the 1776 Commission, which will “promote patriotic education” and “teach our children about the miracle of American history.”

The Trauma of Trump’s Presidency Will Haunt Us

The concealment of verifiable historical fact, the explicit crushing of dissent, the assault on truth to uphold a historical narrative rooted in myths—these are not only autocratic; they’re propagandizing branded as patriotism. Trump attacks truth-telling about the lasting impact of slavery and anti-Black racism because it counters the tale of universal freedom and civil liberty that white Americans have fought so hard to maintain, even as they have fought assiduously to ensure black folks have neither. Trump is fighting to shut up those calling out America’s racial falsehoods and selective remembrances because the truth gives voice to a Black American history (of resilience, resistance, determination, and humanity) that white America has always sought to erase. Above all, it reveals the lie at the core of this country’s founding.

The backlash against critical examinations of American history is happening because telling the truth implicates white America in the second-class citizenship of Black folks today. Acknowledging America’s racist immorality, the unceasing physical and political violence it has inflicted on Black people since its founding, destroys white claims to innocence and self-absolution, doing away with the cherished white American fallacy that our racial caste system is an accidental consequence of Black people’s inherent pathologies and inferiorities and not the engineered outcome of systemic oppression and racism. Real American history identifies how this country has, at every juncture, undermined Black freedom, which in turn demands both accountability and redress. And the only thing white America hates more than having to name its racist crimes is being called to account for them.

There is nothing surprising about this president—an overt racist for whom anti-​Black racism is a major policy platform—engaging in race-baiting. Trump and his supporters are waging a bitter fight against racial progress. They believe American history is proprietary, and their birthright includes selectively retelling. He recently admitted as much. “We grew up with a certain history, and now they’re trying to change our history,” he stated. “That’s why they want to take down our monuments. That’s why they want to take down our statues.” That effort ties him to the slavery apologists, Confederate sympathizers, and historical revisionists who preceded him. Proving the circularity of American history: The more it changes, the more its foundations remain the same.