In March of 2016, Donald J. Trump’s campaign for the Republican presidential nomination was in trouble. His poll numbers were collapsing, and he was repeatedly the subject of jokes on major TV networks and elsewhere for his attacks on women, Muslims, and Mexicans. Fox News criticized his “extreme, sick obsession” with Megyn Kelly. “The bottom is dropping out for Donald Trump,” read one article on NBC News. Even immigration hard-liners weren’t sure about the reality-TV star. They knew his promised border wall was a costly, impractical symbol; for decades, border barriers had underwhelmed in their ability to decrease immigration.

Stephen Miller had a plan, though. Trump’s lanky 30-year-old senior policy adviser and speechwriter had connections in the Border Patrol and ICE unions from his time derailing a bipartisan immigration reform bill as communications director for then–Alabama Senator (soon-to-be Attorney General) Jeff Sessions. Miller reached out to the Border Patrol union’s president, Brandon Judd. It was the first in a long chain of decisions that would help transform the Department of Homeland Security—with its mandate to defend against everything from terrorism to pandemics—into a tool for pushing Trump’s political agenda, focused on strangling legal immigration and social justice causes.

When Trump became president, Miller went to work. It should be no surprise, then, that less than four years later the Department of Homeland Security is openly defying a US Supreme Court decision to maintain Deferred Action for Childhood Arrivals (DACA), an Obama-era deportation protection program for people brought to this country as children. The DHS has also been cracking down on anti-racist protesters at demonstrations in Democratic-run cities that began after George Floyd was murdered. The department has become a partisan weapon largely detached from its mission of protecting homeland security.

“During the campaign, I would speak to [Miller] once a month maybe,” Judd told me while I was reporting for my book, Hatemonger: Stephen Miller, Donald Trump and the White Nationalist Agenda. He and I were in El Paso on July 26, 2019, a few days before a white terrorist killed 23 people, the majority of whom were Mexican-Americans, at a Walmart nearby. This terrorist had imagined he was defending the United States from “a Hispanic invasion.” 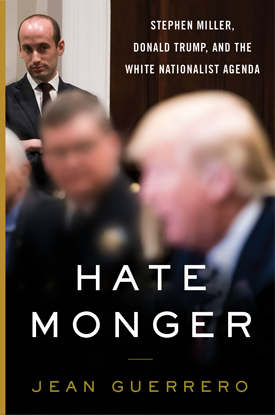 Earlier in the day, Judd had spoken at a border wall symposium sponsored by NumbersUSA, an anti-immigration group propped up in the 1990s by the eugenicist John Tanton, who believed in race-based pseudoscience and population control for nonwhite people. The Border Patrol union had long-standing ties with Tanton’s think tanks. Judd complained on stage about Border Patrol agents’ being called “Nazis.” “You can’t even tell a mundane joke without all of the political correctness stepping out and saying you’re a bad person,” he said.

The symposium featured far-right influencers such as Pizzagate conspiracist Mike Cernovich and Trump’s former chief strategist Steve Bannon, who had left the White House in August 2017. The event was livestreamed in front of a privately funded stretch of steel border wall as speakers hatemongered about an alleged invasion. “Quiet on the set!” Bannon cried between speeches. Tens of thousands of other people watched online. Kris Kobach, the former Kansas secretary of state, told viewers it was important for them to act against the alleged invaders. “The battle of Fort McHenry, which our ‘Star-Spangled Banner’ is about—was that won only by George Washington’s professional soldiers? No. It was the private citizens, the farmers of Maryland who held the line against the British,” he said.

A bald man with deep-set eyes, Judd was in good spirits. Miller had kept most of the promises he’d made to the union in 2016. Sure, he hadn’t succeeded in putting Kobach at the helm of the DHS like they wanted, but he tried. Ultimately, Kobach’s too-glaring ties to white supremacy were deemed an issue. Still, Miller and Trump gave Border Patrol agents unprecedented power, inviting Judd to the White House repeatedly. Judd gushed to me about Miller: “If anybody wants to say that he’s not an alpha personality, they’re wrong,” he said. “He absolutely has an alpha personality.”

In 2016, Miller had wanted the union to endorse his boss, giving Trump real border security credentials. The union had never endorsed a presidential candidate before. But Judd said morale among agents had been low ever since thousands of Central American youths fleeing violence began arriving at the border in 2014. “Our agents have been pulled from the field to babysit, clean cells, change diapers,” Judd grumbled then. “We’re actually making burritos. That’s not our job. Our job is to protect the border.”

The reality of the Central American crisis—rooted in US foreign policy—had impinged on the agents’ perceptions of themselves as vanguards and warriors of the border. Miller understood their unhappiness. As a young man, Miller had repeatedly referred to the United States as a female endangered by multiculturalism, perhaps imagining himself on a quest to save a damsel in distress. “America is a living thing, with a beating heart,” he wrote in 2007. The Border Patrol could help him. Agents wanted to keep asylum seekers locked up. Families who convinced asylum officers that they had a credible fear of persecution if returned to their home countries were often released on parole because of legal limits on how long children can be detained. This caused many agents to feel useless. They called it “catch and release.” They complained that high-ranking Obama officials didn’t always listen to them about their desires to detain and deport people.

On March 23, Miller appeared on Breitbart radio to make his promises to the entire Border Patrol union. “I am here today to say that we are going to work closely, directly and intimately with the National Border Patrol Council to develop a border policy for this nation.… they’re gonna have a direct line into our policy-making on a routine basis.”

He was promising, in other words, to invert the power structure at the DHS.

The union, which represents thousands of agents, endorsed Trump. On its Breitbart-funded podcast, The Green Line, a dramatic soundtrack set up stories about the “invasion.” Union leaders revealed far-right leanings, attacking progressives and calling Black Lives Matter protesters “terrorists.” Jenn Budd, a senior Border Patrol officer who left in 2001, says the culture has long been steeped in racism and antiquated notions of masculinity. “It’s the same characteristics as Donald Trump,” she said. “It’s this white male mentality of ‘I say whatever I want and get whatever I want,’” Last year, a ProPublica investigation revealed a secret Facebook group where thousands of Border Patrol agents make racist jokes about migrant deaths and throw “burritos” at Latin-American members of Congress. (It is unsurprising when one considers the origins of the Border Patrol, which began with the appointment of Jeff Milton, a son of a Confederate governor, as the first Border Patrol officer, after his stint with the Texas Rangers, which was the KKK of the border, falsely mythologized as a band of rugged heroes.)

The ICE union followed the Border Patrol in endorsing Trump six months later. Peter Vincent, ICE’s principal legal adviser and senior counselor for international policy under Obama, says putting the unions in charge of the agenda at the Department of Homeland Security is risky: “When attorneys with DHS and the DOJ are no longer serving as the guardrail or a restraint on the natural proclivities of undisciplined law enforcement officers, that is a very dangerous step.”

Draconian steps were taken to deter family immigration over the course of the Trump administration. Starting in January 2017, Trump signed an executive order expanding the Border Patrol’s ability to detain and deport people, and ending the dreaded “catch and release.” Thousands of children were separated from their parents to skirt legal limits on how long children can be locked up. Slowly, through steps taken to force people to await their asylum court proceedings in Mexico, the asylum system at the US-Mexico border was obliterated. Most top positions at DHS are vacant or held by people in an acting capacity, making officials the puppets of Trump, Miller, and the union.

In July 2020, the DHS war on migrants expanded to include American citizens who oppose white supremacy. Acting DHS secretary Chad Wolf is regurgitating Miller’s apocalyptic talking points. He penned an article in The Federalist in July 2020 characterizing anti-racist protesters as “lawless mobs” destroying America. Wolf didn’t used to speak like this. “To see [Wolf] pull a strongman routine is shocking,” said a former senior DHS official who worked closely with Wolf and Miller during their time at the White House. “He [was] so dry and vanilla, which is a huge part of the reason Stephen wanted him to be secretary. Stephen’s idea is, ‘Let’s put someone in who’s not going to stand in my way.’” Another former senior official agreed. “I never saw him as an ally of Miller,” said the former official.

The Border Patrol Was Responsible for an Arrest in Portland

Wolf, formerly a high-paid lobbyist, caved during the second half of 2017, while “getting the crap beat out of him by [Miller],” said the former official, speaking figuratively. Wolf worked on pulling together memos for addressing the surge of people coming across the border that December, when he was chief of staff for then-Secretary Kirstjen Nielsen. One of the options in the memos was separating children from their parents. He became acting secretary in fall 2019.

Now, the DHS is defying court orders to protect young migrants and fomenting chaos on the streets, fueling the illusion that the country is under siege and that Trump is a wartime president. Border Patrol and ICE agents can once more feel like warriors. Miller can appear on TV in bespoke suits, playing savior. “This is about the survival of this country,” Miller said on July 23. It is a dramatic fantasy Trump will lean on ahead of November to distract from the thousands of more deaths that will occur from a virus he failed to contain.

A previous version of this article incorrectly stated that Acting DHS secretary Chad Wolf wrote memos for separating children from their parents in December 2017. He had worked on pulling together the memos but did not write any himself.