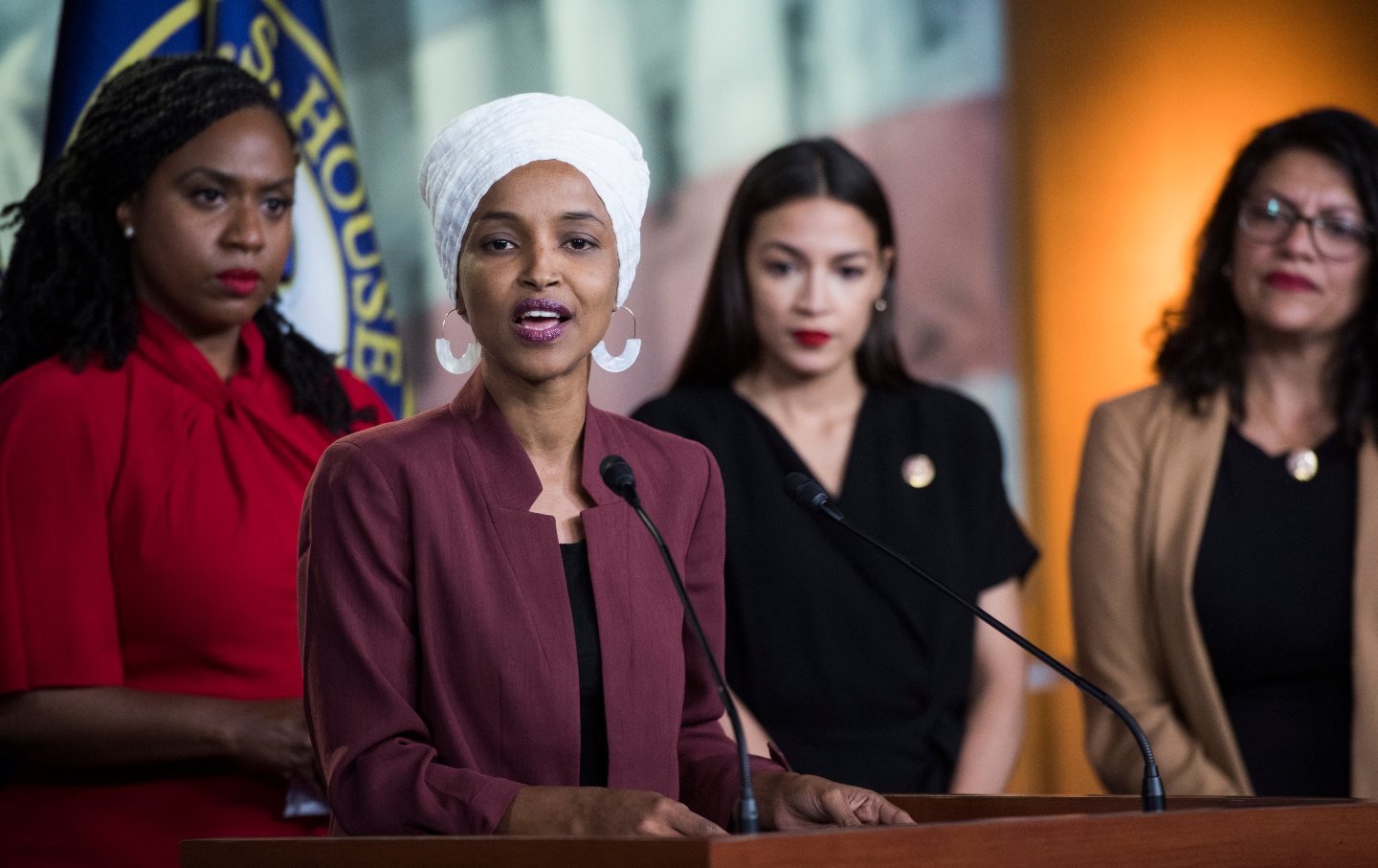 What’s being done to ensure members of the squad are protected from future attacks by violent white terrorists? No, really—I’m asking. This group of Black and brown congresswomen has long been the target of right-wing terror. In 2019, Alexandria Ocasio-Cortez, Ayanna Pressley, and Rashida Tlaib received so many death threats that they asked to be informed only if they were “credible and imminent.”

In the immediate aftermath of the Capitol coup attempt, one of the MAGA insurrectionists issued a call on social media for fellow terrorists to “assassinate” Ocasio-Cortez. Questions still remain about whether the panic buttons in Pressley’s office—which her staffers discovered had been torn out—were removed under sinister circumstances or as an egregious error that could have proved fatal. Threats against Ilhan Omar have been so prolific that during the failed putsch, she was taken to a secure location for senior leaders of Congress because of the uniquely high risk posed to her life.

While the white terrorists have left the Capitol, the Republican members who rub shoulders with them remain. There’s Matt Gaetz, who defends, poses with, and pals around with Proud Boys; Lauren Boebert, who says “I am the militia” and is connected to paramilitary groups like the Three Percenters; and Paul Gosar, who reportedly told members of the Oath Keepers that an American civil war has already begun but “we just haven’t started shooting at each other yet.” Along with Donald Trump heir apparent Marjorie Taylor Greene, who infamously cosigned the murder of her Democratic colleagues, these are just some of the GOP’s most vocal and visible rising stars in the House.

They are also, as Ocasio-Cortez has not so obliquely noted, among the key players in a faction of Republicans who maintain “fealty to white supremacist organizations” not just “as a political tool” but because they themselves are “legitimate white supremacist sympathizers.” And the threats these congressional anti-anti-fascists pose to the Squad are real. Boebert, who had previously tweeted, “I WILL carry my Glock to Congress,” refused to let Capitol police search her bag after setting off metal detectors installed after the insurrection she encouraged. Greene once stalked Tlaib and Omar, who are Muslim, around the Capitol to demand that they retake their oaths on the Bible, while Congresswoman Cori Bush described being verbally accosted by a maskless Greene in January. The Black freshman representative said it was the reason she will be “moving my office away from hers for my team’s safety.” Greene, who recently wore a mask reading “Molon labe” (a Greek phrase favored by gun nuts meaning “Come and take them”), had also posted an image of herself holding an assault rifle next to the faces of Ocasio-Cortez, Omar, and Tlaib, whom she had labeled “hate America leftists.”

Harry Breaks Free From the Racial Contract—and Pays the Price

“Posting a photo with an assault rifle next to the faces of three women of color is not advertising. It’s incitement,” Omar wrote at the time, sharing that Greene’s post had prompted death threats to come rolling in. Those threats only added to the racist and misogynistic abuse that members of the Squad were already receiving. Tlaib reportedly got her first death threat before she’d been sworn in to Congress in 2019, while Pressley’s staffers mounted mugshots on her office walls of people who’d made threats against her, until the sheer number required that they be filed in binders. Members of law enforcement have repeatedly targeted Ocasio-Cortez: Two New Orleans police officers were fired for suggesting she should be shot, and a Facebook group for Border Patrol officers featured sexually violent memes of her.

There’s a particularly vicious and violent hatred white right-wingers have for Black and brown women who they believe do not know their place, which they imagine is nowhere near the House of Representatives. Within months of the Squad’s election to Congress, Trump, an outspoken white supremacist elected by his base to forestall the diminishment of white male power, expressed and exploited these sentiments. Trump’s harassment campaign pulled out every racist greatest hit, demanding the four “go back” to where they came from, debasing them as “savages,” and accusing them of being “not very smart”—meaning innately, genetically unqualified.

Those attacks encouraged Trump supporters to aim their hatred at a group of Black, brown, and Muslim women who were easy scapegoats for their fears of white irrelevance. There’s no need to rehash the endless security failures leading to the coup attempt, but video evidence documents how dangerously close the mobs got to Capitol legislators and staffers. These Trumpian terrorists killed a cop and trampled one of their own to death. If they had gotten their hands and zip ties on members of the Squad, the murder toll would unquestionably have been higher. Trump acolytes like Greene, whose racist ideas about the illegitimacy of Black votes are part of her sustained assault on Bush and Omar, continue to gin up potential violence.

“We still don’t yet feel safe around other members of Congress,” Ocasio-Cortez admitted in late January, after Congressman Andy Harris was caught trying to bring a gun into the House chambers, where they’re banned.

And yet, despite the dangers posed both inside and outside the Capitol’s walls, the Squad continues to push a necessary progressive agenda. They have vowed to center racial justice, voting rights, education access, climate change, and health care for all in the current Congress. The fundamental importance of their presence, far beyond issues of representation or being “firsts,” is in the politics they support and the leftward push they continue to exert on a stubbornly centrist Democratic Party. It is not surprising that, as on the front lines of every progressive movement, women of color are leading—and taking racist blowback in the process. This is the undue burden carried when, as Pressley has stated, “your very existence is resistance.”