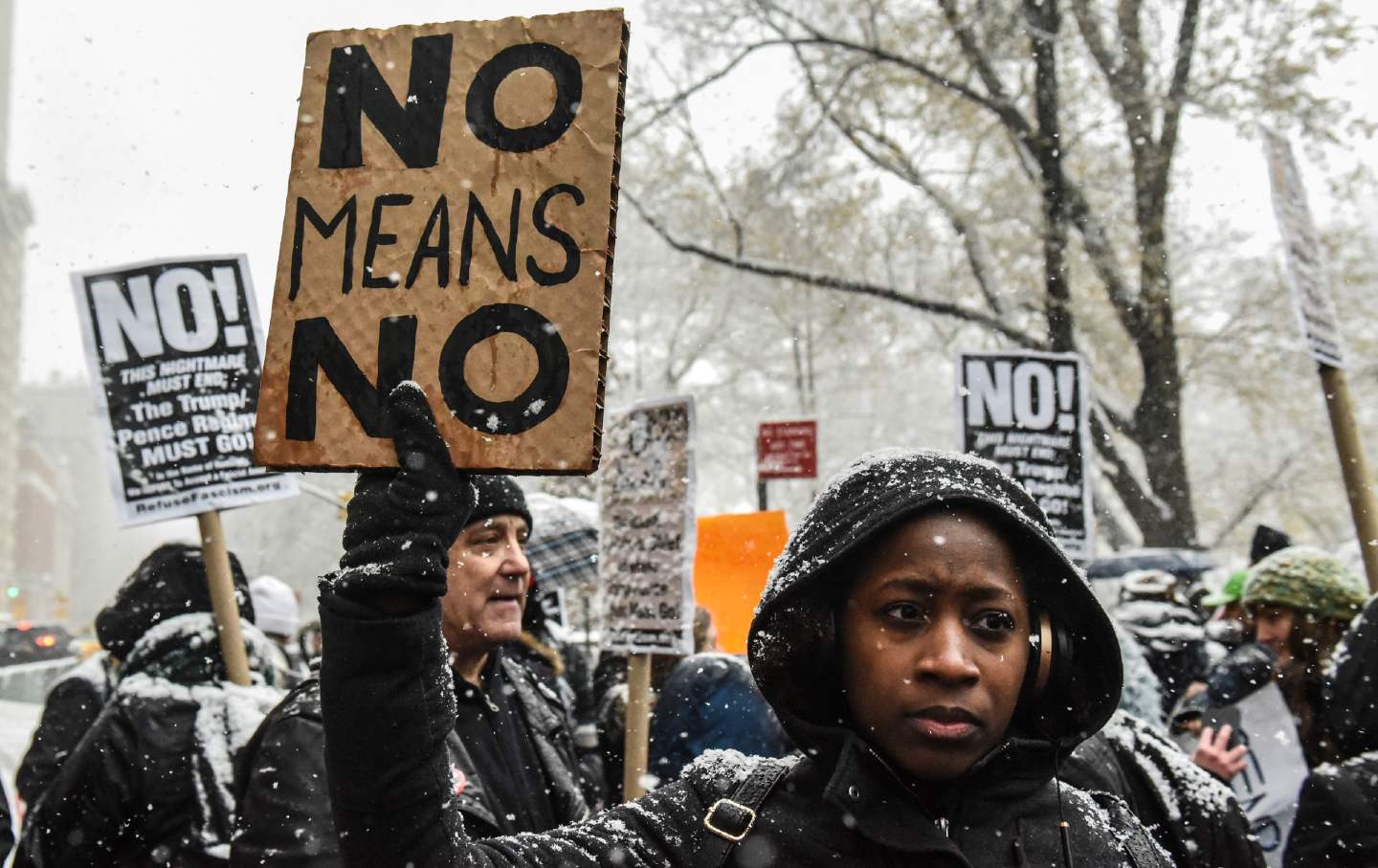 One July night in 2019, Tiffinni Archie felt a stranger’s fingers closing around her throat and woke up screaming. Too scared to fall sleep again, she took a shower and tried to get ready for another day at work. At night, in her dreams, it was always strangers who attacked, chased, and strangled her; by day, it was her supervisor who slapped her on the back and called her the “token African American” at their small police department in Washington state.

Every day she braced herself for a new attack: Her coworkers wrote a letter to the chief of police accusing her of sleeping with another minority police officer for favors on the job. They accused her of putting her hand on her vagina and then rubbing her coworker’s face. One coworker told her that he had to work twice as hard because “minorities have it easy.” They cruised past her home at night to intimidate her. She lived in fear of what they might do or say to her next.

Her police department was a white men’s club, and it was clear that they didn’t want her there. But no matter how bad it got, she couldn’t afford to leave her job: She was one month pregnant, and as a single mother, she needed health care and an income.

The night terrors had begun when she reported her supervisor and coworkers’ abuse to the chief of police. He told her to look for another job. She tried reporting to her sergeant and the deputy chief—they, too, ignored her complaint. When the police department fired another minority police officer for filing his own discrimination complaint, she finally contacted the Equal Employment Opportunity Commission (EEOC). But reporting, she said, was “almost worse than being harassed. Each time, I had to relive the trauma. It was a physical pain, like a knife in my stomach, stabbing me over and over.”

Her anxiety skyrocketed—she suffered heart palpitations, panic attacks, and was diagnosed with a sleeping disorder—but her doctor advised that she shouldn’t take Zoloft, her anxiety medication, as it could increase the chance of birth defects. “I couldn’t put my baby’s life at risk,” she said. Forced to choose between her baby’s health and her workplace rights, she withdrew her complaint.

Tiffinni gave birth in March 2020 after a difficult labor. Shortly after, she grew disturbed when she found orange dust in her baby’s diaper. “Brick dust,” a concentration of uric acid crystals in the urine caused by inadequate milk intake, can signal a baby’s failure to thrive. Her baby had dropped a pound in weight. She saw a lactation specialist and joined a breastfeeding group. But her doctor told her that anxiety had stopped her milk production, causing her baby’s weight loss and dehydration. Desperate to avoid anxiety at all costs, she decided not to renew her complaint—at which point her breast milk returned. Her Title VII statute of limitations expired in September 2020.

Title VII of the Civil Rights Act of 1964 prohibits discrimination in the workplace based on race, color, religion, national origin, and sex—which includes gender identity, sexual orientation, sexual harassment, and pregnancy. But unlike the Equal Pay Act, which has a reporting deadline of two years, Title VII requires reporting to the EEOC within just 180 days of the most recent act of discrimination, or 300 days if the discrimination is also covered by state law. Washington state gives victims of workplace discrimination 300 days to report. But for Tiffinni, who feared for her baby’s health, it wasn’t enough time.

Title VII’s short filing period harms one of the very populations it’s meant to protect: pregnant or nursing mothers. The 180 or 300-day limit forces workers to go through the stressful process of reporting during pregnancy or the critical first few months of their child’s life. The stress is particularly acute for Black pregnant workers, who face higher rates of miscarriage, maternal mortality, and premature and low-birthweight babies. Title VII’s short statute of limitations can threaten both the mother’s and child’s health.

“Pregnancy can be a time of great uncertainty for people who rely on their job for health care and income,” said Sarah David Heydemann, senior counsel for education and workplace justice at the National Women’s Law Center. “It’s often a time when people may be reluctant to rock the boat.” Black mothers frequently provide the primary economic support for their families: In 2017, more than 68 percent of Black mothers were the breadwinners for their families, compared to 36 percent of white mothers. For Black mothers, reporting workplace discrimination could mean not only jeopardizing their perinatal health but also risking employer retaliation and losing the income their families depend upon.

Originally, Title VII had an even shorter charge-filing period: 90 days. The Equal Opportunity Act of 1972 amended the filing period to 180 days, modeled after the National Labor Relations Act, which protects union activities. With union support, employees can report more quickly; but most employees making Title VII complaints lack similar support to help them file on time. They must advocate for themselves, often after suffering trauma and emotional injury. Sadly, Title VII’s statute of limitations doesn’t follow injury law’s longer filing periods, typically at least two to three years. It still has the narrow 180-day time limit defined in 1972.

Forty-nine years later, that statute of limitations is in dire need of reform. Only 6 to 13 percent of those harassed at work ever file a formal complaint, according to the EEOC’s 2016 Select Task Force Report on Harassment. An EEOC information intake representative I spoke with told me he often turns away complaints because of the time constraint. “Unfortunately,” he said, “a lot of the traumatic conditions caused by discrimination at work cause people to delay filing.” He documents every call he receives, but the EEOC doesn’t note how many are turned away for missed deadlines. “There isn’t a specific category in the call database’s drop-down menus for missed time limits. It gets lumped in with all the other cases,” he said. The EEOC hasn’t prioritized the impact of Title VII’s short filing period—an important missing statistic.

Recently, New York, California, and a small handful of blue states extended their statutes to two, three, or five years to address Title VII’s flaws. But the rest of the country lags far behind. Pennsylvania House Bill 2286, which proposed a two-year extension, died in committee in 2018. “Your protections shouldn’t depend on which state you live in,” Sarah David Heydemann said.

As part of his “Agenda for Women” in the 2020 campaign, President Biden supported the BE HEARD in the Workplace Act, a bill that modernizes Title VII to tackle the many barriers victims face when reporting. It would ban nondisclosure agreements, eradicate the “severe and pervasive” standard for harassment, and extend the federal statute of limitations from 180 days to four years across the country. It would give Black mothers like Tiffinni better workplace protections. But the BE HEARD Act has languished in Congress since 2019.

Tiffinni’s coworkers stopped harassing her only when her police department got slapped with a lawsuit. But she still has anxiety, nightmares, and trouble sleeping due to the harassment. Her therapist recommends the only way to fully heal is to find a new job and start a new life. She wants to leave law enforcement altogether, even though she’s dedicated her entire working life—14 years—to the field. “I decided to become a cop to change how people are treated,” she said. If Tiffinni only had been allowed adequate time to make her complaint, perhaps she wouldn’t have to pay such a high price—giving up her life’s work.