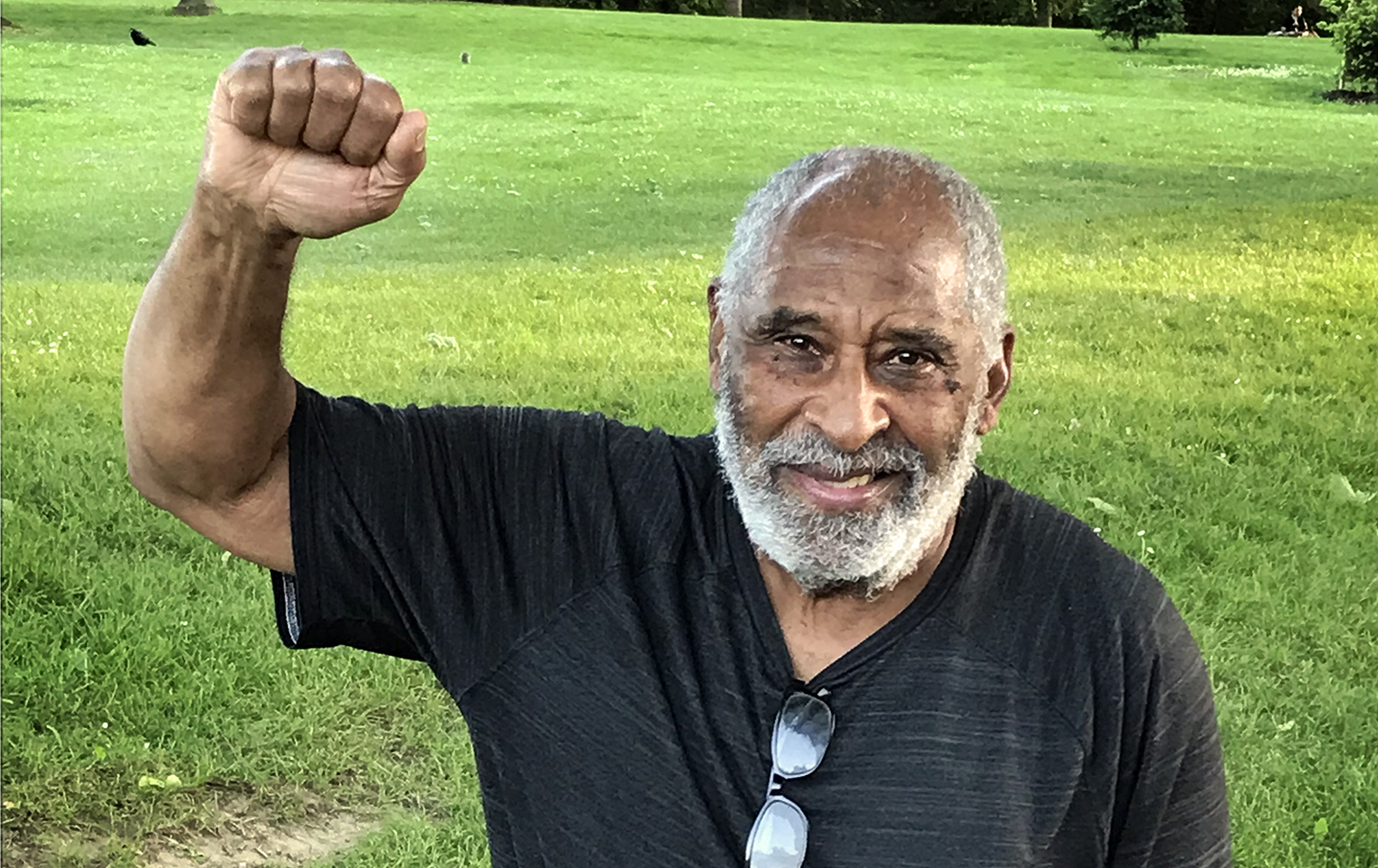 For the past three weeks, Kent Ford has hit the streets of Portland, Ore., to protest police brutality and fight for racial justice. Ford, 77, knows more than his fair share about both police repression and political activism. Fifty-one years ago, he founded the Portland chapter of the Black Panther Party. After being released from jail, where he had been held for two weeks on riot charges, Ford walked onto the steps of the old city police station in downtown Portland and publicly launched the chapter, stating, “If they keep coming in with these fascist tactics, we’re going to defend ourselves.”

It was June 1969 and the chapter was already abuzz with activity in private. After the assassination of Martin Luther King Jr., Ford started meeting with a group of like-minded African American activists for weekly political education classes where they would read and discuss texts like Kwame Nkrumah’s Neo-Colonialism: The Last Stage of Imperialism, Mao Zedong’s Little Red Book, and Huey Newton’s pamphlet, Executive Mandate Number One. Soon they would have two health clinics: the Malcolm X Dental Clinic and the Fred Hampton People’s Free Health Clinic.

Violence and erasure are both part of state repression, and it’s vital to keep the histories of suppression alive. When dissent is crushed or goes underground, there can be a certain thinning of the threads that latch one generation to the next. Ford is determined to thicken those threads, working with a younger generation of activists to spread the lessons of protests past while keeping the horizon open for new tactics and techniques.

Ford’s register is a sort of ferocious kindness. To discuss his experiences as an activist and his thoughts on the present political conjuncture, I spoke with Ford at numerous protest events and did two formal interviews in June.

ules oykoff: A recent spate of police killings of African Americans—including George Floyd and Breonna Taylor—has galvanized people across the country to take to the streets in protest. How does your own repression connect to what’s happening today?

ent ord: Back in the day, the community was a tinderbox, just like it is now. The police were always on us, stopping us for minor infractions. A license plate light here, a turn signal there. Jaywalking. Just real petty stuff. My own run-ins with police brutality go back to the late ’60s, when cops snatched me out of a police car and roughed me up. I was handcuffed just like George Floyd was. They claimed I was swallowing something even though I wasn’t. They slammed me onto the ground, just beating on me. One stuck his finger in my mouth, and I bit down on it. He started hollering, “He bit me. He has my finger.” When they stopped beating on me, I let his finger loose. They charged me with riot and inciting a riot, and they took me to jail. I promised God that night that if I lived through this, I would struggle against the system as long as I lived. I was acquitted, by the way, and a federal judge awarded me a $6,000 settlement.

Point 7 of the Black Panther Party’s 10-Point Platform read, “We want an immediate end to police brutality and murder of black people.” That was written in 1966! This is 2020, and it’s relevant as ever. When the police in Minnesota killed George Floyd, it was murder, a public lynching plain and simple. Same for Breonna Taylor. Practically every city across America has similar stories. Here in Portland, there’s Keaton Otis, Aaron Campbell, Kendra James. Keaton Otis got shot 23 times by Portland Police, only months after they dusted Aaron Campbell. I go to a vigil for Keaton Otis every month.

I try to connect what’s happening in Portland with what’s happening in other places. You can’t understand what happened to George Floyd without talking about Palestine. Palestinians have lost their homelands to Zionists. You can’t understand what’s going on in this country if you don’t talk about the US war machine abroad. A line runs straight through. I got to admit, I drank a bit of the Kool-Aid that under Obama things would get better. But let’s not forget, Black Lives Matter got started under a black president. It’s bigger than Obama. It’s a system, a racist system.

KF: Our survival programs were the core of our daily activities. By 1970 we had two health clinics running strong. At the Malcolm X Dental Clinic, volunteer dentists saw patients on Monday, Wednesday, and Friday evenings. The Fred Hampton Memorial People’s Health Clinic had more than two dozen volunteer doctors, around 50 nurses, and was open five nights a week, from 7 to 10 pm. The clinics offered free care to everyone—it didn’t matter what your race was. I can tell you that the community needed this. The clinics were bustling, man.

We Need Police Out of Our Schools—Now

The free breakfast program was one of the Black Panther Party’s signature programs. In Portland, our free breakfast program served up to 125 children a day. We were getting up at 5 o’clock in the morning, and we were loading up the trunk with weapons of mass destruction: bacon, eggs, pancake mix. And that was one of the biggest and baddest things that we did. We were often shorthanded, but by the grace of God we got it done. Kids will come up to me today and say, “Mr. Ford, you used to feed us at the church when we were kids.” It’s just beautiful. The city had completely written off this area of Portland. It was a no-man’s land. The people in the area loved us. They knew we had their backs, and they had ours.

JB: And you had political education programming, too.

KF: Yes, we were big into political education, or “PE” as we called it back in the day. We had a requirement for each party member to read for two hours a day. We also had a reading group where we discussed the writings of Kwame Nkrumah, James Baldwin, Angela Davis, Malcolm X, Harold Cruse, Mao. Frantz Fanon’s The Wretched of the Earth was like a Bible for us. We held political education classes every Wednesday and Sunday night to talk about what was going on at the local, national, and international levels. Our readings focused on three evils of the empire: militarism, capitalism, and racism. Sometimes we would have lawyers come to the PE classes to explain the law to us—the basics about demonstrations, about minor driving infractions that police would use against us to keep a cap on the political situation.

JB: And you remain an avid reader today.

KF: You can go a long way in understanding politics if you read Arundhati Roy, Malcolm X, and then fill in the details with Cornel West, Angela Davis, Assata Shakur, and Gary Younge. Gary Younge is one of the top minds in the world—I would put him up there with Malcolm. There’s also Michelle Alexander’s book The New Jim Crow. There’s The Holocaust and the Nakba: A New Grammar of Trauma and History, edited by Bashir Bashir and Amos Goldberg. There’s A More Beautiful and Terrible History: The Uses and Misuses of Civil Rights History, by Jeanne Theoharis. You read it, you process it, you take it into your heart, and then you take it to the streets.

JB: In the media we’ve been seeing a lot of good protester/bad protester coverage. What are your thoughts on that?

KF: I know better than to fall for that shit. Back in the day, we were the “bad protesters” in the local newspapers. We are all out there for the same thing: to fight against police brutality and the harassment of people of color, of black folks. We are all cut from the same cloth. The ideas that these guys are bad, and these guys are good is meant to be a wedge that divides us. Look how long they’ve been telling us to just be peaceful—remember, Malcolm and Martin met the same fate. Trump talks about big bad antifa as some kind of terrorists, but I want to thank antifa for saving Dr. Cornel West’s life in Charlottesville. I want to tell antifa that they are welcome at our rallies—let’s get our heads together. And don’t come at me about looting. The United States has been looting black communities forever.

JB: Portland is known as a white city, in part because the Oregon State Constitution made it illegal until the mid-1920s for black people to settle in Oregon. What has it been like working with white allies in a predominantly white city?

KF: That’s what we had to work with, and so we went with it. We made alliances with Students for a Democratic Society, the Peace and Freedom Party, the Communist Party, and the Women’s International League for Peace and Freedom. We always had the support of a bunch of anti-capitalist and anti-imperialist groups. Even Bill Walton from the Portland Trail Blazers would show up for activist events and protests now and then. Many of these allies provided bail money when we needed it. They even set up a bail fund for us, no questions asked. When I was held on riot charges and had $80,000 bail, white people paid it. A radiologist named Morris Malbin paid half and Penny Sabin, the heiress of Blue Bell Potato Chips, put up potato-chip stocks for the other half. Malbin held fundraisers for us. All the doctors in the clinics were white. I have seen people come together—black people, white people, Native people—and that keeps me in the struggle.

KF: Exactly. People running the protests in Portland are powerful, they have big hearts. They are bringing the right messages to the people. They tell people about their legal rights. I was talking to a couple of them on the phone the other day, and I told them to keep taking it to the streets. That’s where it’s going to be solved. They are going to get pressure to start making concessions. We can’t be duped by petty reforms. We have an opportunity to think big: to decrease police budgets, to end homelessness, to get full employment.

Right now we’re seeing the spirit in the streets all over the United States, even in the small cities and towns. Here in Oregon, there are protests in towns that don’t usually see protest, places like Klamath Falls. This is the real rainbow coalition that Fred Hampton was talking about back in the 1960s before the police dusted him and Mark Clark [a Black Panther member killed by police alongside Hampton]. We are on the move now. We have a real chance to make things better for our grandbabies. It’s a shame that we had to see that horrible eight minutes and 46 seconds to wake people to the reality of the situation. We have to watch each other’s back, look out for each other. I’m 77 years old now, and who knows, I might not be here today, tomorrow, or the next day. But I can rest assure one thing: So long as people are out on the streets struggling against the murder of black people, I’ll be there. I’m on the back nine, but I feel like I’m just starting the front nine. We’ve been here before, but this time let’s take it to its conclusion. Let’s start over and get it right.