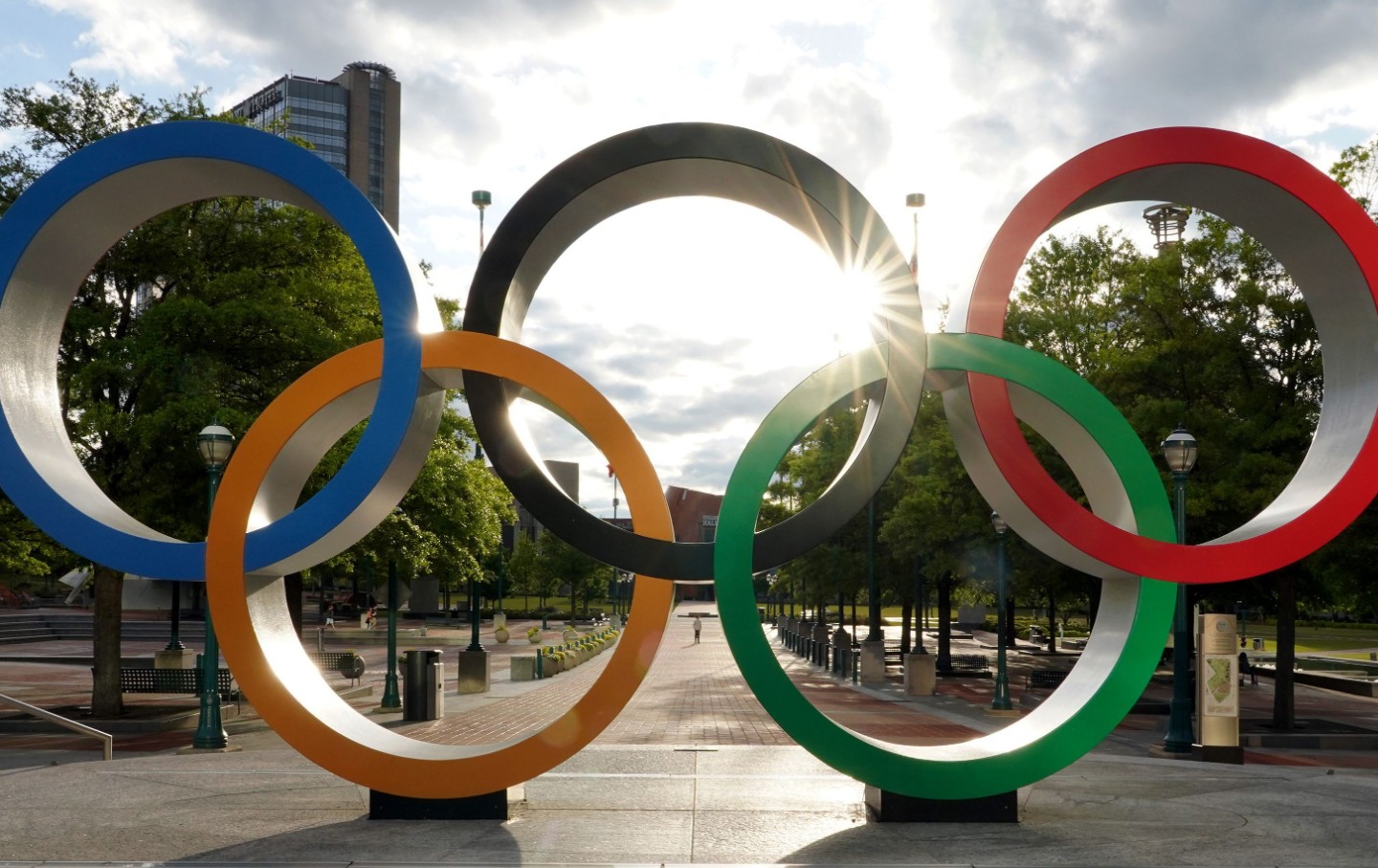 The Olympic rings at the entrance to Centennial Park in Atlanta, Georgia, in April, 2020. (Tami Chappell / AFP / Getty)

Life is short. Athletic careers are shorter. This helps explain why many athletes opt to remain quiet even in the face of injustice. But today we’re witnessing a remarkable upsurge in the athlete’s use of their own voice.

The examples of this are legion, and now Olympians are coming together to say that it’s time for the International Olympic Committee (IOC) to open its bulging coffers to share more of the loot with the athlete-workers who make the event what it is. We already saw a taste of their potential when athletes openly challenged the idea of holding the Tokyo Olympics this summer. If they hadn’t, the Games would almost certainly not have been postponed when they were.

The outrage follows a recent study of Olympic finances that found that compared to big-time sports leagues—the NBA, NFL, NHL, MLB, and English Premier League—the IOC is offering athletes mere crumbs. While these leagues funnel between 40 percent and 60 percent of their revenue into the pockets of athletes, the IOC only forks over a paltry 4.1 percentof its income.

The study, a collaboration between the Global Athlete advocacy group and Ryerson University, concluded that “collective bargaining remains the only viable solution to improve the livelihoods of athletes.” Numerous Olympic athletes agree. Christian Taylor, the two-time reigning Olympic gold-medal winner in the triple jump, said in an interview with the Toronto Star, “It’s outrageous to see how little is actually going back to the athlete. The Olympics is a business. It’s a thriving business. And we as athletes are just not seeing the fruits of that. This should be a wakeup call for all of us.”

The 5 largest pro sports leagues in the 🌏 pay 40-60% of their revenues to players.

According to the group’s own records, IOC members are eligible to receive $7,000 in annual administrative support. The per diem for IOC Executive Board members is a whopping $900. Other IOC members—including “honorary members” like former king Constantine II of Greece, King Willem-Alexander of the Netherlands, and Saudi Prince Nawaf bin Faisal—can expect $450 per day to cover their expenses.

Meanwhile, many Olympic athletes are barely making ends meet. The study mentioned how recent Canadian athletes “on average spent approximately $15,000 annually in excess of their income, of which over a quarter was from employment income, not their sports pursuits.”

In the United States, more than 100 US athletes started GoFundMe pages to cover costs ahead of the Rio 2016 Olympics. People are certainly getting rich off the Olympics, but they’re often not athletes.

The study also found that in recent years, Olympic athletes received around $5,000 per year, which amounted to 0.5 percent of the IOC’s total expenditures. The report noted, “If the IOC simply redistributed its excess revenues to the athletes through reimbursement, scholarships, and training the average annual compensation to athletes would rise to $11,000, more than double its current level.”

Predictably, the IOC pushed back against the study, insisting that the group “redistributes 90% of all its income generated from the Olympic Games to assist athletes and develop sport worldwide.”

This claim is highly misleading. For starters, that money is laundered through international sports federations, national Olympic committees, and other bodies—many of these groups not exactly known as paragons of ethics—with each one slicing off a chunk of cheese for themselves before the money ever makes its way to athletes’ pockets.

Moreover, one analysis of the 2013–16 period by David Owen of Inside the Games even throws into doubt the IOC’s much-touted 90 percent redistribution figure. Owen unearthed some curious categorizations. Instead of counting money spent on Olympic “culture and heritage” as an operating or administrative expense, it went into the “Promotion of the Olympic Movement” pot, as if it were some sort of benefit to athletes. Expenditures on the Olympic Channel and cancellation insurance somehow count toward the IOC’s redistribution “to assist athletes and develop sport worldwide.”

Because IOC financial figures lack basic transparency, Owen had to carry out a valiant deep-dive into the footnotes. He concluded,

Acknowledging that it is in some instances a matter of interpretation, I reckon that a hard-hearted analyst would struggle to justify that 90% redistribution figure—even if he were prepared to include costs linked to OBS [Olympic Broadcasting Services], the Olympic Channel and ‘Culture and Heritage’.

The great sportswriter William Rhoden got it exactly right when he said recently, “The IOC is probably one of the most corrupt organizations on the face of the earth.” Sometimes that corruption arrives in the form of straight-up bribery. But it can happen quietly too, a sort of legalized corruption, as when athletes are given a tiny slice of the Olympic pie, time and again, even while they provide the labor that make the Games what they are.

Thankfully, Olympic athletes have elbowed their way into the political conversation. Once again, athletes are out front. The important report from Global Athlete and Ryerson University makes it clear that the Olympics play out on a split screen: on one side, the world’s best athletes and, on the other, well-positioned sport barons imposing calculated exploitation.

The fact of the matter is that collective bargaining makes a lot of sense for Olympic athletes. A strong union of athlete-workers would be a giant step forward toward equality.