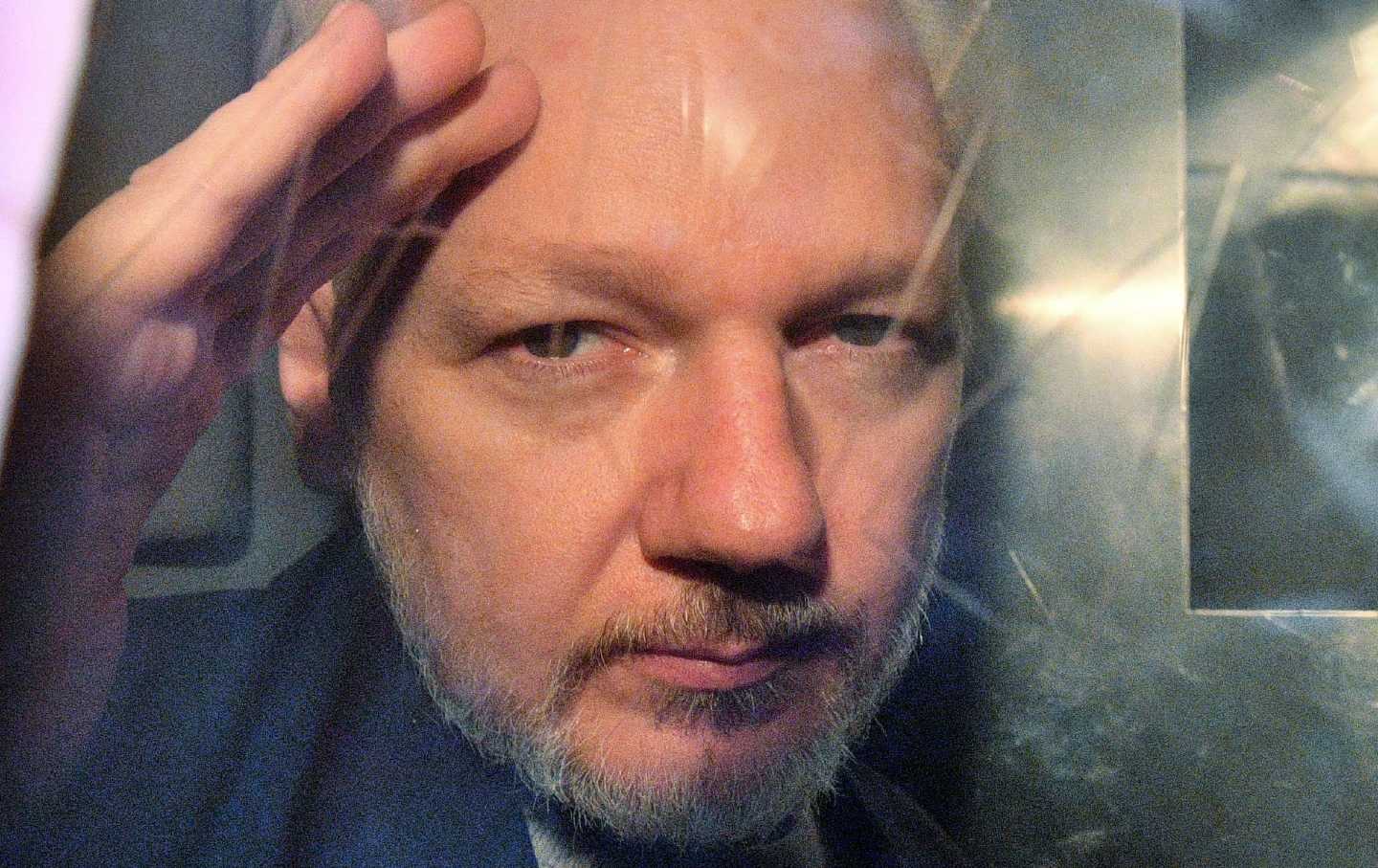 Julian Assange gestures from the window of a prison van as he is driven out of Southwark Crown Court in London. (Daniel Leal-Olivas / AFP via Getty Images)

When the magistrate presiding last September at Julian Assange’s extradition hearing, Vanessa Baraitser, confined the defendant to a bullet-proof glass cage at the back of the court, she had precedent on her side. All who entered her courtroom at London’s Central Criminal Court, the Old Bailey, had to pass a plaque memorializing a case against another defender of free speech and thought. The finely wrought marble plaque reads:

Near this Site
William Penn and William Mead
were tried in 1670
for preaching to an unlawful assembly
in Grace Church Street
This tablet Commemorates
The courage and endurance of the Jury, Thos. Vere, Edward Bushell
and ten others who refused to give a verdict
against them and were fined for their final
Verdict of Not Guilty…

William Penn, then a 26-year old Quaker firebrand, stood accused of preaching doctrines anathema to the established Church of England during an unlawful assembly. When the judges asked how he pleaded, Penn demanded to know which law he had broken. Sir John Howell, the recorder of London, told him he was charged under common law. Penn asked, “Where is that common law?” The exchange continued:

HOWELl: You must not think that I am able to run up so many years, and over so many adjudged cases, which we call common law, to answer your curiosity.

PENN: This answer, I am sure, is very short of my question, for if it is common, it should not be so very hard to produce.

HOWELL: The question is, whether you are guilty of the indictment.

PENN: The question is not, whether I am guilty of this indictment, but whether this Indictment is legal.

The recorder called him “an impertinent fellow” and banished him to the bale-dock for the rest of the trial. Like Assange’s glass box, the bale-dock was a locked cubicle separated from the rest of the court. Its underfloor location prevented Penn from witnessing the proceedings—and the jurors from seeing him.

Just as Assange admitted publishing American government documents that exposed war crimes, Penn did not deny preaching to his fellow Quakers. If ever a jury deserved the accolade “12 good men and true,” Penn’s did. Foreman Edward Bushell and the other 11 jurors retired to consider their verdict. When they returned, they declared Penn not guilty. The furious Recorder ordered that “you shall be locked up without meat, drink, fire, and tobacco…. We will have a verdict by the help of God or you will starve for it.” For two days, they starved. When they still refused to recant, the court fined them 40 marks, a large sum for the time, and sent them to prison. The jurors appealed, the chief justice ordered their release, and the principle of jury independence was enshrined in English law. Penn went free and 12 years later established the colony of Pennsylvania on the principles of religious tolerance and free thought.

With American Help, Lebanon Once Again Nears the Abyss

Cut to New York, 1735. Another free thinker, printer John Peter Zenger, was tried for seditious libel over allegations leveled in the New York Weekly Journal at Royal Governor William Cosby. Cosby, in common with the US Justice Department’s vendetta against Assange, sought to prosecute Zenger at any cost. He had copies of the Journal burned. Although two grand juries refused to indict Zenger, Cosby threw him into prison anyway and brought him to trial. Zenger was fortunate in his choice of lawyer, Pennsylvanian Andrew Hamilton. Hamilton’s strategy was to present evidence of Cosby’s corruption—proving that Zenger had published the truth. The prosecutor answered that “being true is an aggravation of the crime.” As in the Assange case, truth appeared not to be a defense so much as evidence of guilt. Hamilton appealed to the jurors rather than the bench. As former US senator Charles Goodell wrote in his 1973 Political Prisoners in America, “Hamilton asked the twelve to do what the judges refused to do, and what they ruled the jury had no right to do, to consider Cosby’s record as a justification for Zenger’s crime.” The Bushell-Penn precedent gave the jury the right to overrule the judges, and they did. Zenger’s newspaper resumed its vilification of Cosby, who died in disgrace two years later.

Juries do not hear extradition hearings in Britain. If they did, the outcome in the Assange case might be a victory for free speech and the right to publish evidence of state criminality. A friend of mine wrote to me recently, “When I was teaching, in the poorest area of East London, his [Assange’s] arrest warrant had just been issued. People on the bus—shift workers, cleaners, construction workers—used to discuss him over their free copies of the Metro. He was a hero to them.”

Magistrate Baraitser’s verdict, expected on January 4, will not end the matter. Either side may appeal, prolonging Assange’s brutal confinement well into 2021. The surest sign that the United States has ended its war on the free dissemination of vital information would be for the Justice Department to withdraw its extradition application and drop all charges against Assange. President Trump could order that before he leaves office. Joe Biden can do it after he takes the oath to “preserve, protect and defend the Constitition,” including the First Amendment, on January 20. After all, it would be consistent with President Obama’s decision not to prosecute Assange because it would have represented an assault on the entire free press that disseminated the same information Assange did. 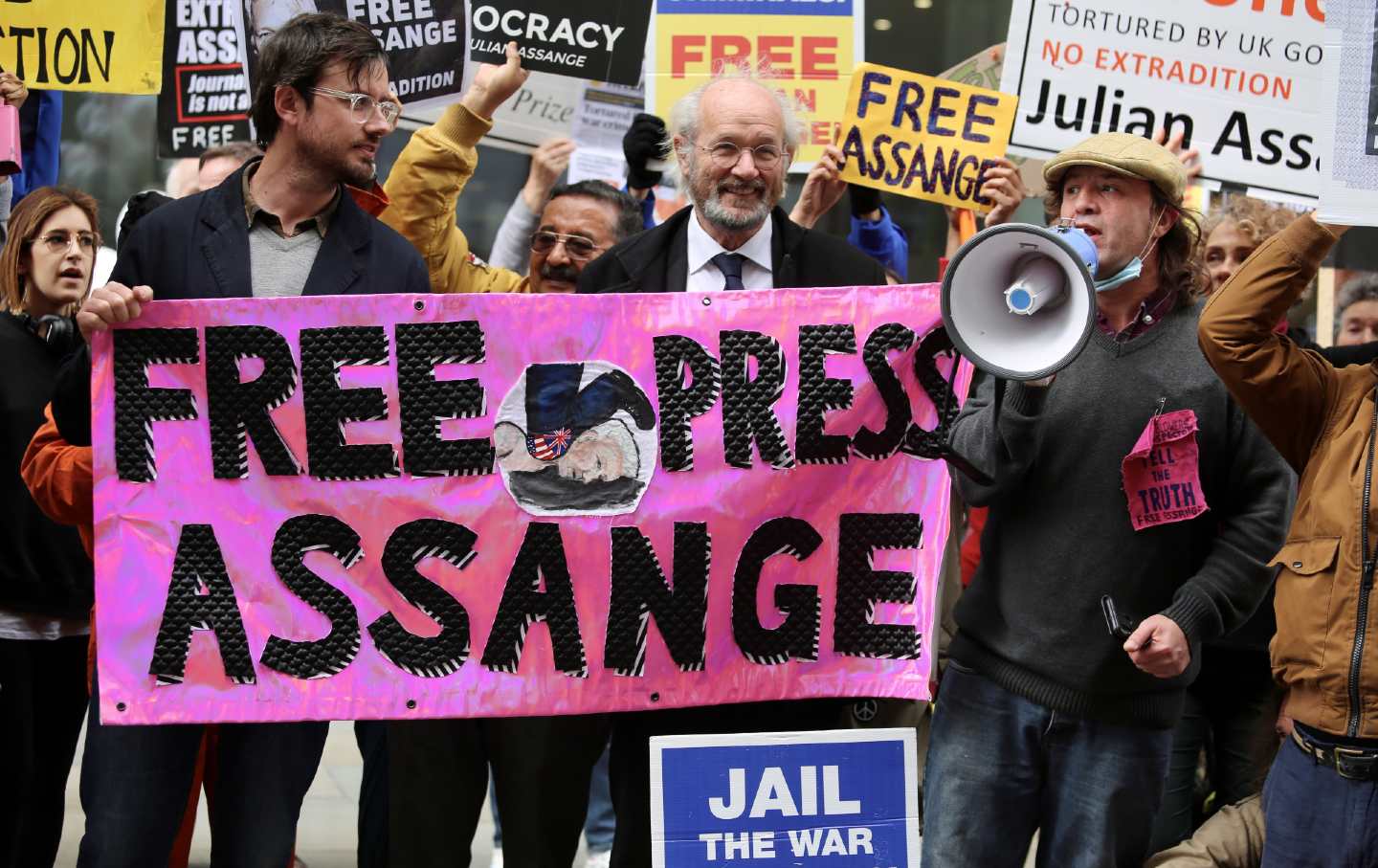 A famous song, often sung by Pete Seeger, asked, “Which side are you on?” Penn’s and Zenger’s—or Howell’s and Crosby’s?