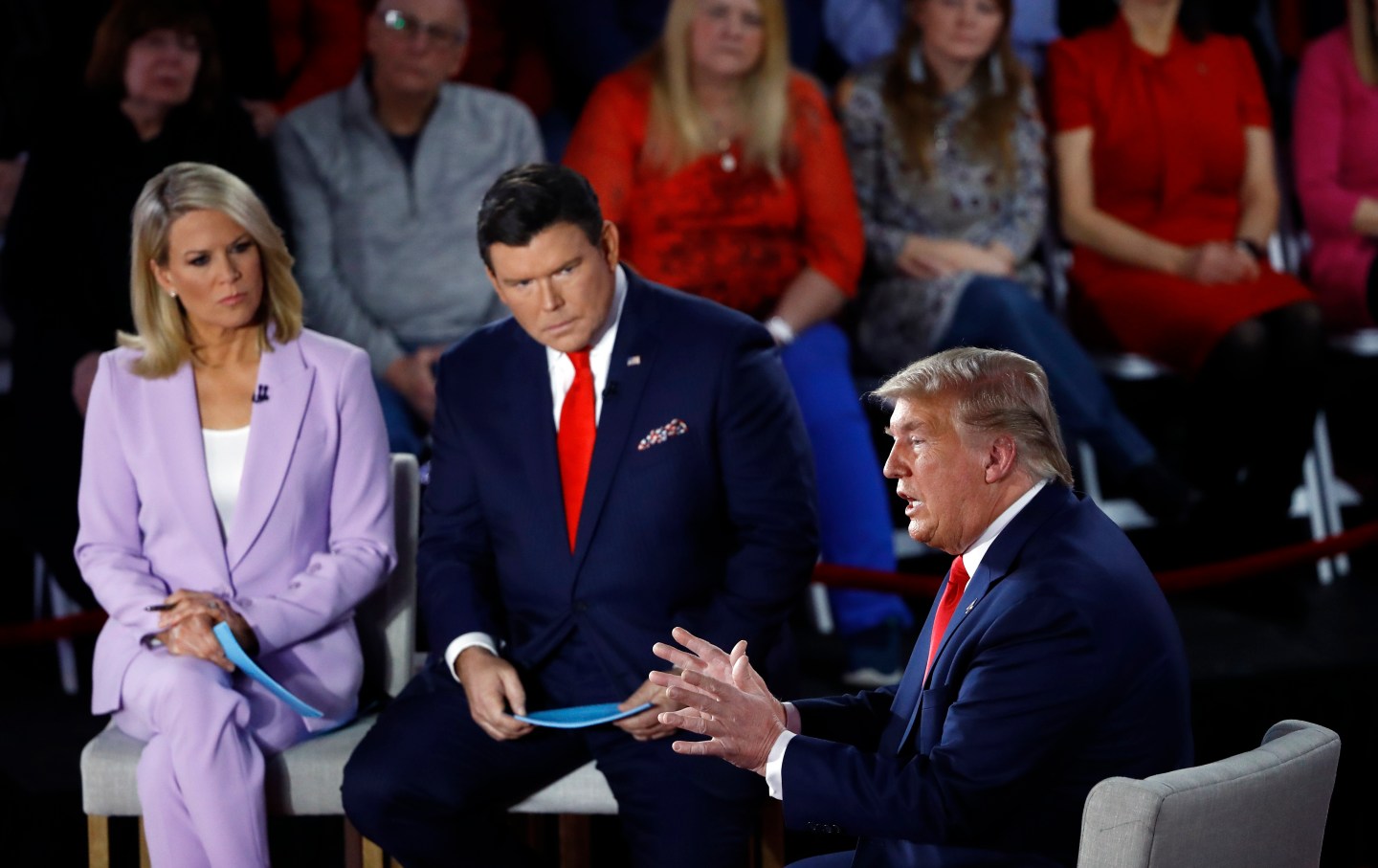 Donald Trump has a few things in common with Joseph Stalin. In some ways, the comparison is an injustice to both men: Stalin was not a moron, grifter, or alleged rapist; Trump is not (as of this writing) a world-historical mass murderer. But both men were addicted to lies. They also smeared anyone who told the truth—or might one day tell the truth—as enemies of the people. A third, related similarity is that they listen to sycophants who praise their bravery and genius, even when the sudden, unpredictable shifts in their beliefs make it nearly impossible for these toadies to remain in good standing. Pity, therefore, the million-dollar babies at Fox News whose careers depend on this complicated skill.

Brian Stelter tells their story in his best-selling new book Hoax: Donald Trump, Fox News, and the Dangerous Distortion of Truth. The folks at Fox News are stuck on a hamster wheel, just like those who serve Trump in the White House. Fox News employees have a much nicer cage, of course. Its stars have annual salaries that can reach eight figures, and people most Nation readers have probably never heard of can easily get paid in excess of a mere $1 million a year. The job is the same at Fox as it is in the White House: to fluff their Dear Leader. Sometimes this means anticipating what Trump will want to do next and suggesting it to him, at times privately but more often on the air while millions of people watch. Other times it means making a fool of oneself, often with a dose of faux outrage over anyone who would suggest that Trump’s most recent bonkers claim was in any way deserving of criticism.

Stelter, who hosts CNN’s Reliable Sources and is a former blogger and New York Times media reporter, has written a book that reads like a 350-page newspaper article: This happened, then that happened, then this anonymous person said this or that about this other person—plenty of gossip but little history or context and barely any explanation as to why something is happening or what it all means. He is unfamiliar with or at least uninterested in the significant body of scholarly literature that investigates the near religious devotion of the Fox News audience. Nor does he delve much into what these phenomena are doing to our country, our democracy, and by extension, the rest of the world. What he does effectively is illustrate, repeatedly and in different contexts, the following points:

§ Former Fox News CEO Roger Ailes was a paranoid right-wing tyrant and a serial sexual predator, but at least people knew what their jobs were when he ran the place, so almost everybody there misses him.

§ Host Sean Hannity acts as a kind of “shadow chief of staff” to Trump, even though he knows the president is “batshit crazy.” Thing is, Hannity is, too; witness his horrific torture of the family of Seth Rich, the Democratic National Committee staffer who was killed in 2016, on behalf of a discredited conspiracy theory. Hannity is also lazy and often tapes his show in advance. For this, he gets paid upwards of $30 million a year.

§ The on-air personalities at Fox News understand that they are a) overpaid for what they do and b) likely unhirable anywhere else. They are therefore willing to abase themselves in the service of Trump’s lies because if they don’t, Fox’s lemminglike audience will turn on them, and they will be left with nothing.

§ The Murdochs, who own Fox Corporation through a family trust, don’t care about any of the above, as long as the money keeps rolling in.

Broadly speaking, the power and influence of Fox News—especially in its current Trump-servile iteration—creates two massive problems for American democracy. Stelter’s book describes one and, unfortunately, embodies the other. The first problem is the perpetuation of what the authors of the book Network Propaganda call the “propaganda feedback loop.” They define this as a “network dynamic in which media outlets, political elites, activists, and publics form and break connections based on the contents of statements, and that progressively lowers the costs of telling lies that are consistent with a shared political narrative and increases the costs of resisting that shared narrative in the name of truth.” In other words, these people are living in a world of lies fed to them by Fox News and Trump, and that’s the way they like it. We are all aware of this problem. It is Trump’s base.

The second problem, however, is the influence on the rest of the media of this extremely profitable, high-profile propaganda network that is allowed to masquerade as news. There is an amazing moment in the book when Stelter is interviewing pathological liar Kellyanne Conway for CNN—something that ought to set off alarm bells itself—about Trump’s absurd claim that he was the victim of voter fraud and had been wiretapped by then-President Barack Obama. To Stelter’s questions, Conway replied, “Excuse me? He doesn’t think he’s lying about those issues, and you know it.” What Conway was saying is that when it comes to lying, Trump is not guilty by reason of insanity. And Stelter apparently accepts this as a satisfactory answer, at least to the degree that he gives her the last word on the topic. Much the same thing can be seen when Stelter quotes Lachlan Murdoch, the executive chairman and CEO of Fox Corporation, again with no pushback, when he describes CNN as the “soft left” and MSNBC as the “hard left.” Recall that CNN is the news network that hired former Trump campaign manager Corey Lewandowski, despite the fact that a nondisparagement clause legally prevented him from not just telling the truth about Trump but even from criticizing him. It is also the news organization that brought on current White House press secretary Kayleigh McEnany while she was still a law student to be one of Trump’s many network dissemblers. Meanwhile, “hard left” MSNBC gives 15 hours a week to Joe Scarborough, a former Republican congressman, and 10 to Nicolle Wallace, George W. Bush’s former communications director. If you were wondering why both-sides journalism is today “balanced” between incitement to race war on the one hand and old-fashioned establishment centrism on the other, well, there’s your answer.