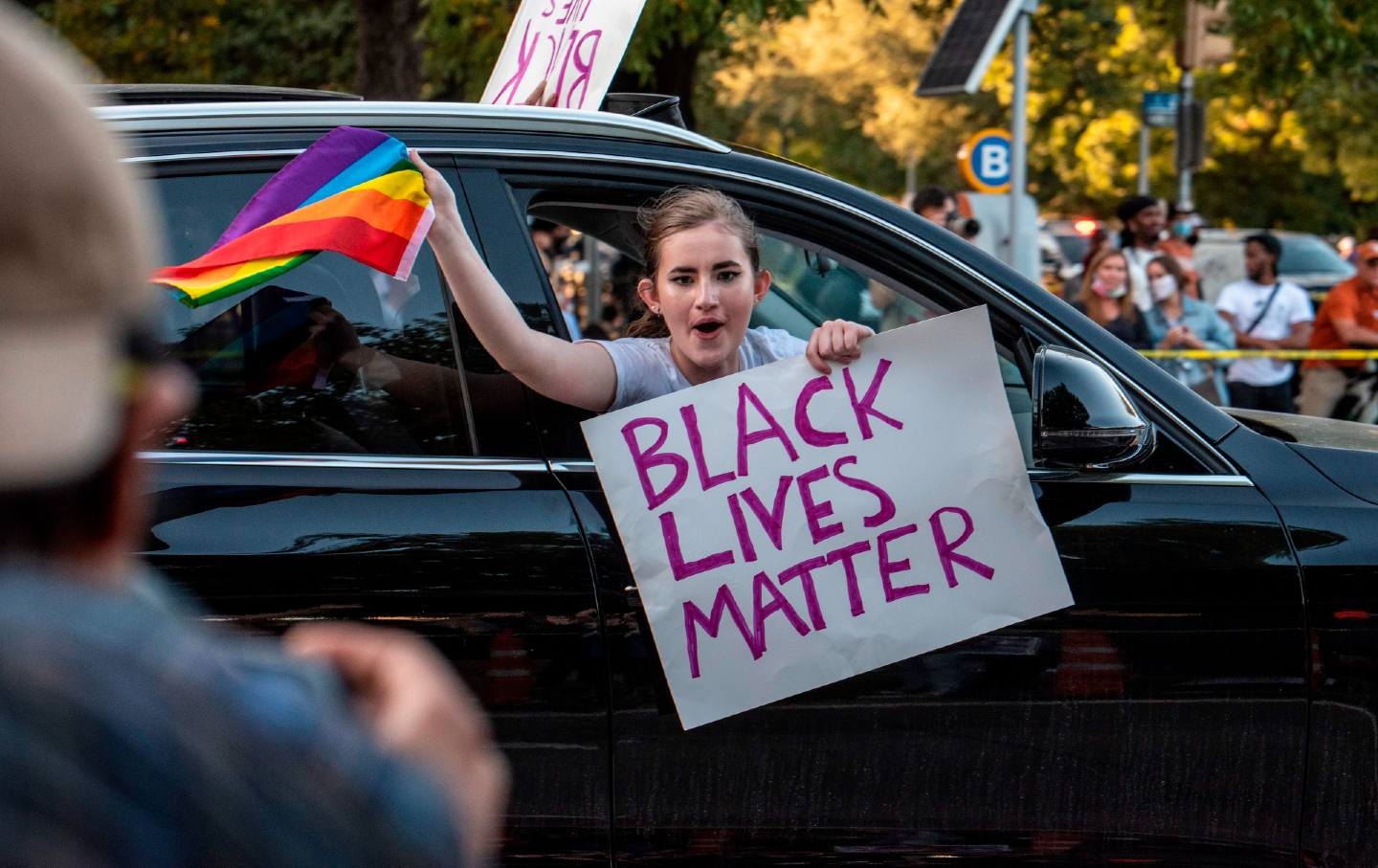 Supporters of Joe Biden cheer as they celebrate his victory in the 2020 presidential election in Austin, Tex. (Sergio Flores / Getty Images)

When I first met Stacey Abrams 10 years ago, I knew right away that the work she was doing in Georgia had great potential. While Stacey has graciously credited my wife and me as being among her first national supporters—even joking that we supported her before it was logical—the ingredients for success in Georgia were there all along, if you knew what to look for. Now that the world has come to marvel at the Georgia miracle, we should be thinking about what states are next and what lessons from the Georgia journey can be applied to the political transformation of other states.

The next state that is most clearly poised for a Georgia-like trajectory is Texas.

I’m working on a book for the New Press analyzing the success stories in states that are upending the national political balance of power, and I’ve identified four factors that are critical to winning. All of these elements were present in Georgia, and Texas has a similar constellation of ingredients for success (it is important to note that while Georgia now commands the national spotlight, Virginia and Arizona have also blazed similar paths, with Virginia actually being somewhat farther along on the journey than most other states).

The threshold factor for determining how likely a state is to flip from red to blue is the composition of the population and the demographic trends of that population. Largely overlooked in the celebration of Barack Obama’s historic 2008 victory was the fact that he got 47 percent of the vote in Georgia although he had removed staff from the state and stopped advertising there. Obama lost the Peach State by 205,000 votes, and there were nearly 1 million people of color who were eligible to vote but didn’t cast ballots. You didn’t have to be great at math to see that increasing the number of voters of color was the path to making major change in Georgia.

Texas at the start of this decade is actually even more promising than Georgia was at the start of the last decade. The Lone Star State has the second-largest pool of nonvoting people of color of any state in the country (second only to already-blue California), and the number of potential voters of color far exceeds the margin of difference in statewide elections. Joe Biden lost Texas by 631,221 votes, and despite the record turnout on both sides, 4.5 million eligible people of color still did not vote, according to exit polls and Census data. In 2018, Beto O’Rourke lost his Senate bid by 215,000 votes in an election in which 5.4 million people of color didn’t cast ballots. The still-untapped potential in Texas is enormous, which is exactly why the conservatives work so hard to suppress the vote there. 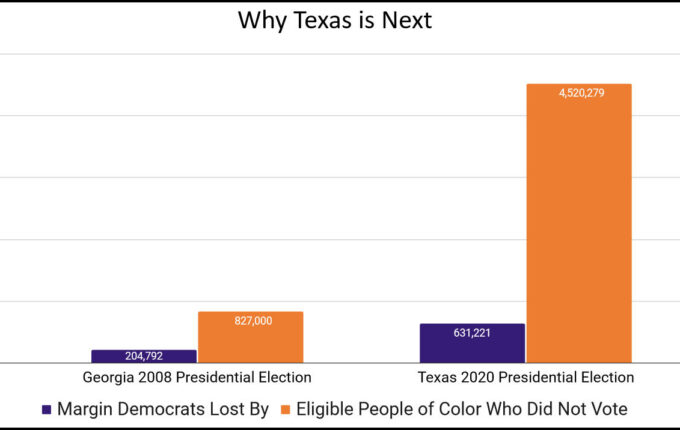 A key cornerstone of success is leadership—in general and, in particular, the presence of what the author Jim Collins calls a Level 5 Leader. Collins, who in his book Good to Great analyzed 1,435 corporations to distill the essential elements that distinguished the most successful organizations, described Level 5 leaders as follows:

Level 5 leaders channel their ego needs away from themselves and into the larger goal of building a great company. It’s not that Level 5 leaders have no ego or self-interest. Indeed, they are incredibly ambitious—but their ambition is first and foremost for the institution, not themselves…. [They] are fanatically driven, infected with an incurable need to produce results.

Stacey Abrams is such a leader. Although she is super-famous now, what’s most remarkable is how her ambition has not been for herself but for the cause. When he was still Senate minority leader—dreaming of becoming majority leader—Chuck Schumer begged Abrams to run for the US Senate in 2019, but she turned down the entreaties and instead encouraged the Rev. Raphael Warnock to enter the race. While at the beginning of the 2020 presidential race, it seemed like every white Democratic politician who had ever run for office decided that they could and should be president, Stacey passed on the race to, as she is fond of saying, “do the work.” And the work that she did laid the foundation for ousting a white nationalist from the White House and flipping control of the United States Senate.

Texas is blessed to have Level 5 Leaders as well. Two of the key ones are Michelle Tremillo and Brianna Brown, the executive director and deputy director of the Texas Organizing Project. The fact that you probably haven’t heard of them is actually a testament to their Level 5 humility. Like Stacey, they are maniacally focused on “doing the work,” and have built TOP into a relentless and effective civic engagement machine that has helped tip electoral outcomes in cities and counties across the state. As graduates of elite universities, they each could have had far more lucrative and prestigious professional careers, but they have made meaningful life decisions to focus their energies and talents on the cause of transforming Texas.

Texas has so many Mexican Americans and African Americans (a combined 53 percent of the state’s population) for a reason—the land there used to belong to Mexico and was annexed into the United States through war and bloodshed in the 1840s so that the residents of the state could continue to hold Black people in chattel slavery. Just as Abrams’s success is rooted in Georgia’s civil rights history, it is not inconsequential that Mexican-American and African-American daughters of Texas are leading an organization that is entrenched in and driving change.

A large pool of potential voters of color in a state undergoing demographic transformation is an essential component of success, but translating that population potential into political power requires well-run, community-based, disciplined organizations. The presence of a strong civic engagement infrastructure is the third pillar of transforming a state.

Virginia’s political metamorphosis over the past decade would not have been possible without the steady and savvy work of New Virginia Majority and other key groups that registered 300,000 voters and knocked on 2.5 million doors to pave the path for Democrats to take control of all branches of government in 2019. The work that resulted in Arizona electing two Democratic senators and defeating Trump started 10 years ago when a constellation of community-based organizations came together to form the One Arizona coalition, which has steadily organized in communities of color across the state, significantly boosting the number of Latino voters over the past several years. And in Georgia, Stacey saw the need for a key vehicle in 2014 when she created the New Georgia Project and recruited Nse Ufot, another Level 5 leader, to run it, growing it to an operation that has hired and trained 3,000 organizers in all 159 counties of the state and registered half a million voters.

The Texas Organizing Project is playing a similar linchpin role in Texas. TOP has a membership of 285,000 people, and in 2020 reported that it directly turned out 310,000 infrequent voters of color who did not vote in 2016. TOP’s voter registration and mobilization work has tipped the balance in close mayoral elections in Houston and San Antonio, and it has helped elect progressive district attorneys in five counties. The fact that Trump won Texas obscures the progress that has been made. Trump squeezed every last vote out of a constituency going through what Joy Reid calls “demographic panic,” and, as the Georgia runoff elections showed, without Trump and the fanatical allegiance to him that leads people to storm the Capitol and murder police officers, Republican turnout is less visceral and large, making winning the Texas gubernatorial election and capturing the state House in 2022 a real possibility.

I used to try to illustrate the chronic underfunding of the most effective and promising leaders and groups by saying that donors should add a zero to their contributions to those organizations. Stacey’s PAC Georgia Next, Inc. raised just $53,000 in 2012 (and still accomplished its goal of blocking a Republican supermajority that year). In 2020, her organization Fair Fight raised $90 million, and, properly funded, she was able to help save the entire democracy by withstanding and fending off the full force of the president of the United States, the Republican Party, all the statewide elected officials in Georgia, and untold millions of dollars from Republican dark-money operations.

Texas is bigger than Georgia, and the long-term potential is even greater than what we are witnessing in Georgia, but the organizations and leaders there are woefully underfunded for the work they are doing. TOP’s budget is about $5 million. It should be $50 million. The Democratic ecosystem of party committees, super PACs, and progressive groups spends close to $1 billion every cycle; $200 million of that should be flowing into Texas.

Georgia has shown the world that it’s possible. Texas is poised to build on that model and continue the revolutionary work of transforming America into the multiracial democracy that it aspires to be.