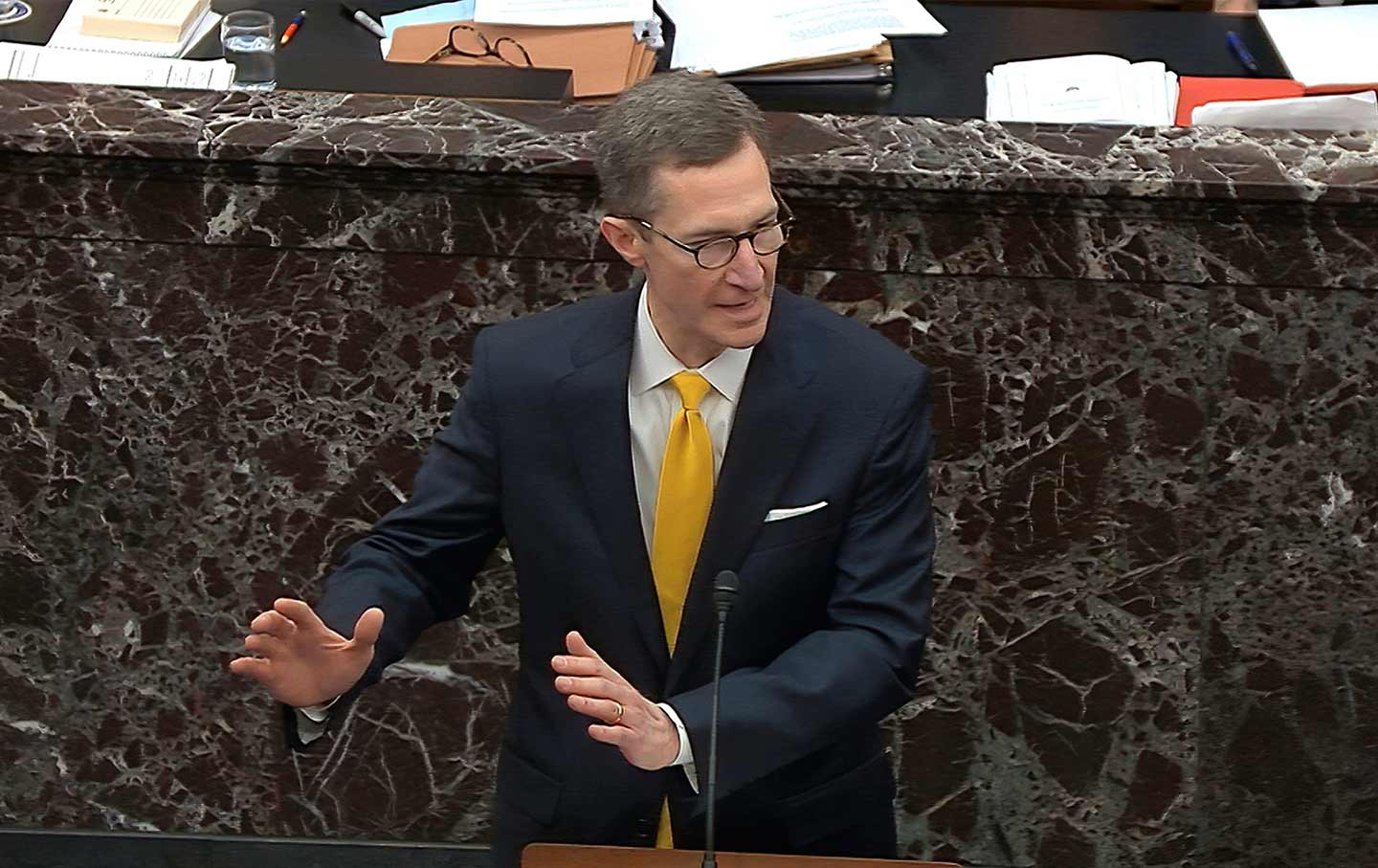 Forget about the bad theater of impeachment trial presentations by TV lawyers Jay Sekulow, Ken Starr, and Alan Dershowitz, the self-referencing fabulists who dissemble history and the law in the service of Donald Trump.

Even Dershowitz admits that he is wasting our time with fringe opinions that law professors and constitutional scholars dismiss as absurd. “Alan Dershowitz, to his credit, said that his own view was very much a minority view of what the impeachment provision means,” explained legal analyst Jeffrey Toobin. “To his discredit, the reason why it’s a minority view is because he’s wrong.”

The truly threatening argument being advanced by Trump’s defense team, and the one that could haunt this country for decades to come, was a fantasy delivered in deliberate, calm, and lawyerly language by deputy White House counsel Patrick Philbin. At the same time that President Trump was openly bragging about his obstruction of Congress—“Honestly, we have all the material. They don’t have the material…”—Philbin twisted logic in order to claim that congressional efforts to address that obstruction represented an assault on the system of checks and balances.

Even as he acknowledged that the president’s refusal to cooperate with the House impeachment inquiry was “unprecedented, perhaps, in the sense that there was a broad statement that a lot of subpoenas wouldn’t be complied with,” Philbin griped, “[House impeachment managers] say that if we cannot impeach the president for this obstruction then the president is above the law.”

That is one of the arguments that the managers have made, and they have made it for a reason: Because it is true. Presidents can and should be checked and balanced when they act as if they are kings. This is an understanding grounded in the Constitution and the debates that framed it. At the Constitutional Convention of 1787, Gouverneur Morris of Pennsylvania argued against giving the impeachment power to the House because “[impeachment] will render the Executive dependent on those who are to impeach.” His view was rejected, out of respect for the point made by George Mason of Virginia in the essential questions of that debate: “Shall any man be above justice? Shall that man be above it who can commit the most extensive injustice?” Warning specifically about the corruption of the election process, Mason asked, “Shall the man who has practiced corruption, and by that means procured his appointment in the first instance, be suffered to escape punishment by repeating his guilt?”

Philbin’s presentation was straight out of Alice’s Adventures in Wonderland, an unabashed “through the looking glass” assertion that what the founders of the American experiment intended was not what they intended. As such, it was every bit as absurd as what Dershowitz asserted, yet far more dangerous. He was arguing for a reimagining of the separation of powers in a way that would lock in an imperial presidency.

In an instance where the president is obstructing a legitimate and necessary congressional inquiry, Philbin warned, “If the House could jump straight to impeachment, that would alter the relationship between the branches. It would suggest that the House could make itself superior over the Executive.” 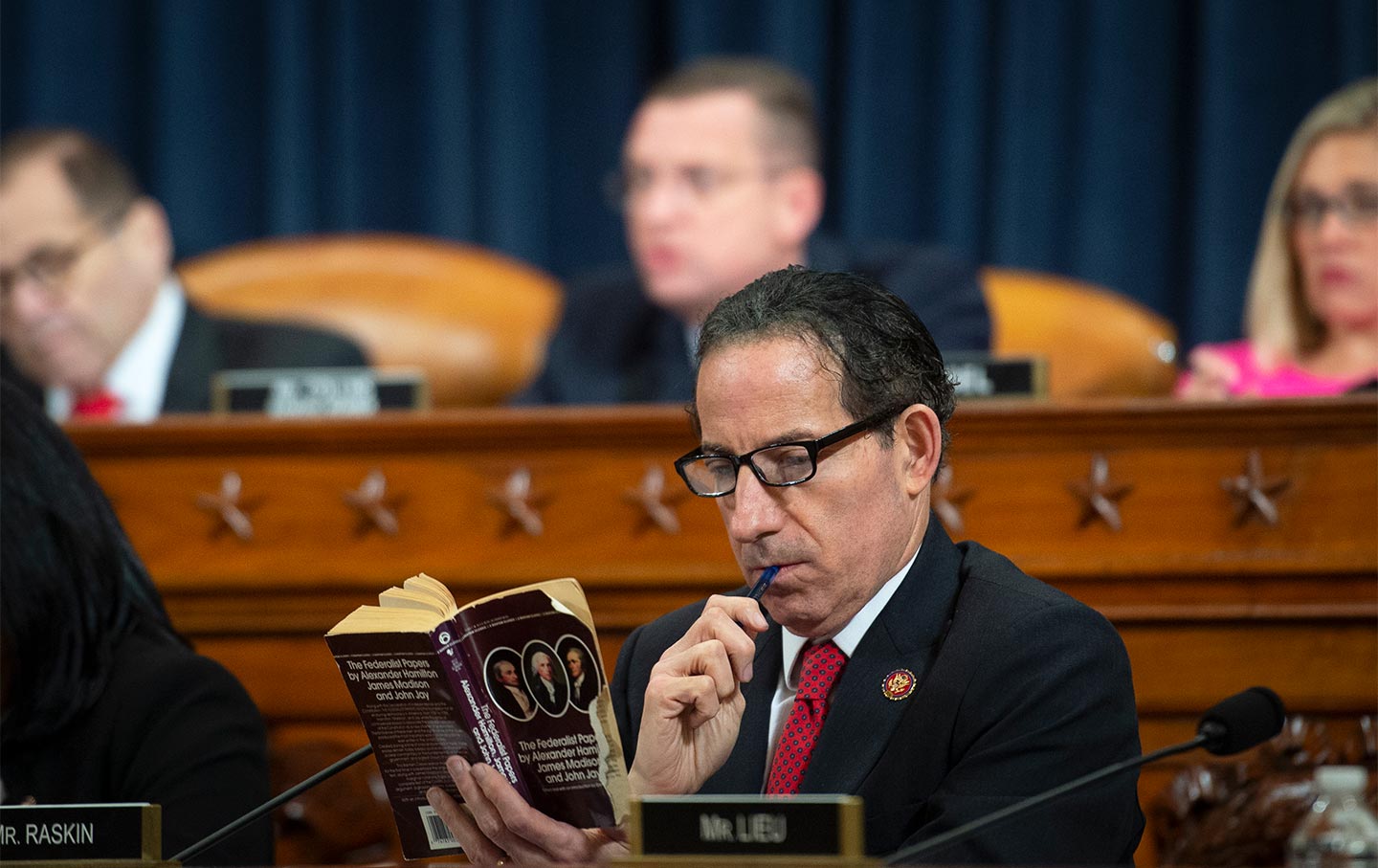 At the Center of the Impeachment Debate Stands a Constitutional Scholar

Well, yes. The drafters of the Constitution feared an imperial presidency with monarchical reach—and the abuses that might extend from that reach. So they did, in fact, give the Congress, especially the people’s House, unique authority to check and balance the executive.

Let’s turn to an actual constitutional scholar, Representative Jamie Raskin, for an explanation of why this matters.

In addition to serving as a member of the House Judiciary Committee, Raskin is a professor of law emeritus at American University Washington College of Law, where he teaches constitutional law, the First Amendment, and the legislative process. I asked him recently about the separation of powers, the system of checks and balances, and the danger of an imperial presidency. Here’s what he said:

Do you see what’s happened there? The sovereign political power of the people to establish the country, to establish the government and the Constitution, flows immediately into the Congress. And then you get 37 paragraphs setting forth all of the powers of Congress to regulate commerce domestically [and] internationally, to declare war, to regulate naturalization, to spend money through the appropriations power, and on and on and on. And even in Article 1, Section 8, Clause 18, “all other Powers…necessary [to the] Execution of the foregoing Powers,” right? So it’s a very expansive, robust granted power to Congress.

Then you get to Article 2 and the president. And what do you have? Four short sections. The fourth section is all about impeachment, right? And the president’s core job is to take care that the laws are faithfully executed. Beyond that, he is the commander in chief of the armed forces in times of actual conflict.

That was the constitutional design. The whole Revolution was conceived as an insurgency against monarchy. We wanted to overthrow the rule of the kings and queens and nobles. So the president is put in there with very strict limits.

Congress should make no apologies for asserting its authority to impeach and remove a president. Despite what the Trump defense team asserts, this is how the system of checks and balances is supposed to work. It is the necessary and appropriate answer to Mason’s eternal questions: “Shall any man be above justice? Shall that man be above it who can commit the most extensive injustice?”