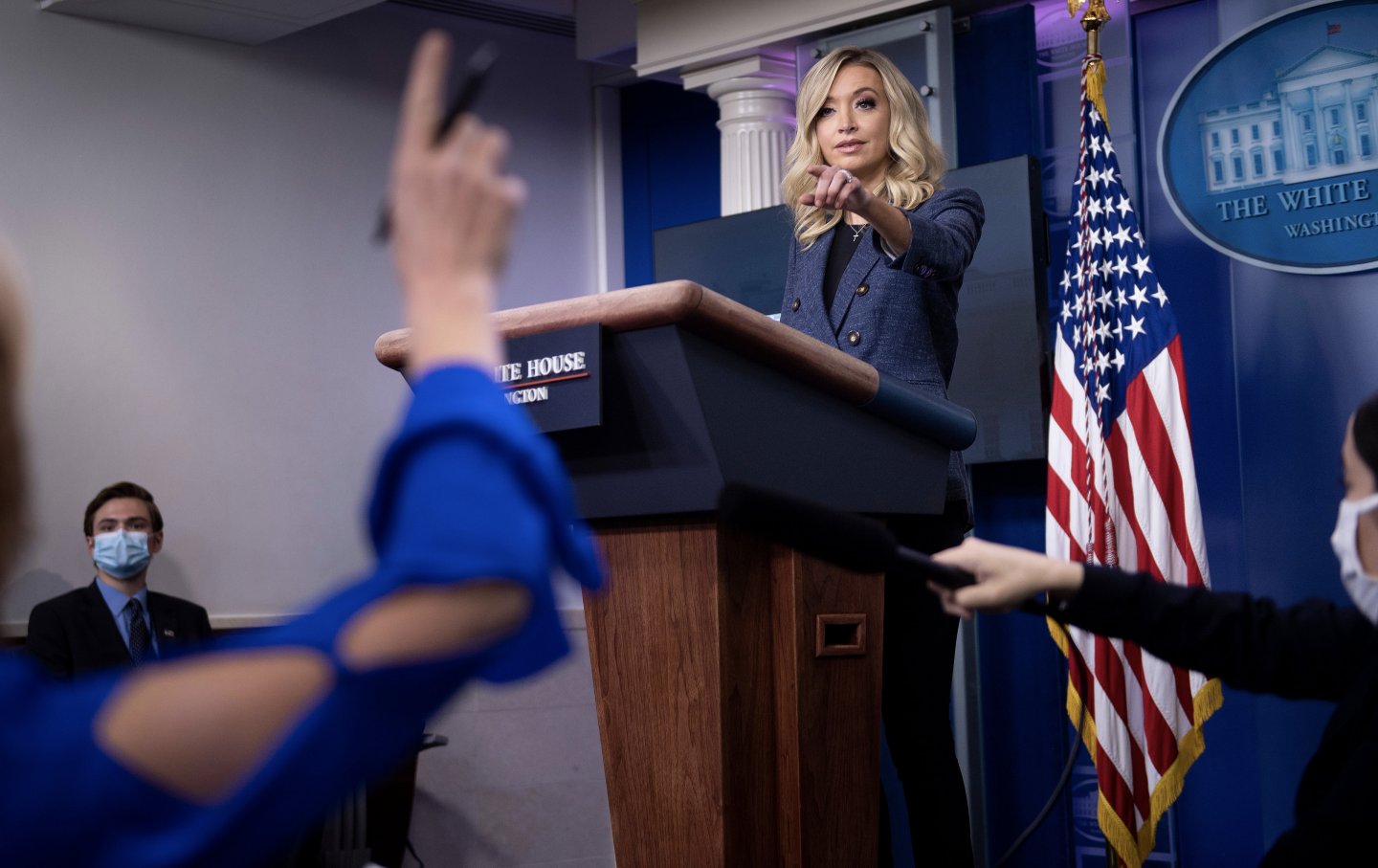 With an employment history distinguished by hypocrisy, dishonesty, racism, xenophobia, homophobia, and shamelessness, Donald Trump’s new press secretary, Kayleigh McEnany, might be the president’s most perfect appointment yet.

The press is treating her lack of training in journalism or government as unique, but McEnany is, in fact, following in the footsteps of Heather Nauert, who burst onto the media scene 20 years ago with no qualifications, save for a burning desire to be famous and an ability to persuade an older white male network executive—Fox News’ Roger Ailes—to put her on television to pontificate about politics. Now these are exactly the kind of “qualifications” that land a person in a top-level government job. (Nauert, Trump’s former State Department spokesperson, would probably be the nation’s UN ambassador today had she not withdrawn her name from consideration as a “personal decision.”)

McEnany rose to prominence as a result of her Twitter feed. Back in 2012, at age 24, she tweeted hilarious “jokes” like the one promoting an imaginary TV series—“How I Met Your Brother”—followed by the punch line “Never mind, forgot he’s still in that hut in Kenya” and the hashtag “#ObamaTVShows.” Weirdly, this did not get her hired at Fox, but it didn’t hurt her chances at CNN, where she originally presented herself as an anti-Trump Republican. At the time, she complained that Trump’s statements were “racist” and dismissed his campaign as not serious and “a sideshow.” But CNN president Jeff Zucker needed pro-Trump pundits, and so McEnany—just a law student at the time—was somehow recast in that role, along with the hapless Jeffrey Lord. Apparently Zucker didn’t care whether what McEnany said was true or even made sense. Like some other male cable TV directors, he may have thought right-wing blondes were just fun to watch. As to the question of why he would hire people for the 2016 election with a willingness to defend Trump’s lies and zero journalism experience, Zucker told The New York Times in 2017, “Everybody says, ‘Oh, I can’t believe you have Jeffrey Lord or Kayleigh McEnany,’ But you know what? They know who Jeffrey Lord and Kayleigh McEnany are.”

McEnany has now replaced Stephanie Grisham, who followed Sarah Sanders and Sean Spicer as White House press secretary but managed to avoid Saturday Night Live’s mockery by failing to hold a single press briefing during her nine months in the job. If there were any doubts about McEnany’s suitability for the position, she likely put them to rest on February 25, when as the Trump campaign’s national press secretary, she announced on Fox Business, “We will not see diseases like the coronavirus come here, we will not see terrorism come here, and isn’t that refreshing when contrasting it with the awful presidency of President Obama?”

In proud Trumpian tradition, McEnany began her tenure with the statement “I will never lie to you. You have my word on that” and then proceeded, immediately, to lie. The lies were about Trump, of course, but also about Brett Kavanaugh, Joe Biden, Robert Mueller, Michael Flynn, and the FBI, among others. Here, for instance, is McEnany’s reading of an FBI memo referring to Flynn: “Quote, ‘We need to get Flynn to lie,’ quote, and ‘get him fired.’”

The Press Is Amplifying a Dangerous Know-Nothing Ideology

Fox News Has Always Lied to Old People. This Time It May Kill Them.

Here is what the memo actually said: “What’s our goal? Truth/Admission or to get him to lie, so we can prosecute him or get him fired?”

Remember, McEnany is a public official whose salary is provided by taxpayers and whose job is to inform the press—that is, to tell the truth about what the executive branch is doing. And yet the woman whom the New York Daily News called an “often soft-spoken Bible-loving conservative rising star” and whose “energetic spinning of the administration’s struggle against the coronavirus,” according to The New York Times, has earned “grudging respect for her sheer doggedness” could not do her job for 15 minutes without undermining its essential reason for being. And here’s the worst part: It (mostly) worked. The regular morning update from Axios’s Mike Allen repeated her dishonest “I will never lie to you” pledge without any explanation or context. So did the next day’s Times, with a headline that read, “‘I Will Never Lie to You,’ McEnany Says in First White House Briefing.” (Though to be fair, the story itself was pretty accurate.) The clearest headline that appeared in a major news outlet was above Aaron Rupar’s article for Vox: “Minutes after pledging to not lie, the new White House press secretary lied a whole bunch.”

OK, so the president’s press secretary is hardly the most important person in any administration, but this one is exemplary of the Trump White House. Everywhere you look, Trump has appointed people who view the purpose of their job as to destroy the department they were chosen to lead. We have an attorney general dedicated to undermining the rule of law and a secretary of state who destabilizes our alliances and trashes our treaties. Plus Trump’s recent appointee as director of national intelligence is someone who juiced his résumé and gives every impression of being a conspiracy theorist. The only reason he might be confirmed is that Trump appointed an even nuttier and possibly even more destructive person as the acting director. Every time one of these appointments occurs, the press pretends that the person is on the level.

People talk about battling the coronavirus as if we were at war. And we are. But we’re at war with our own government, with Trump treating the executive branch as his personal army, bent on the destruction of our constitutional democracy. And though the president is clear about his intent when he calls honest journalists the “enemy of the people,” so far, too many members of the media cannot stop themselves from collaborating.