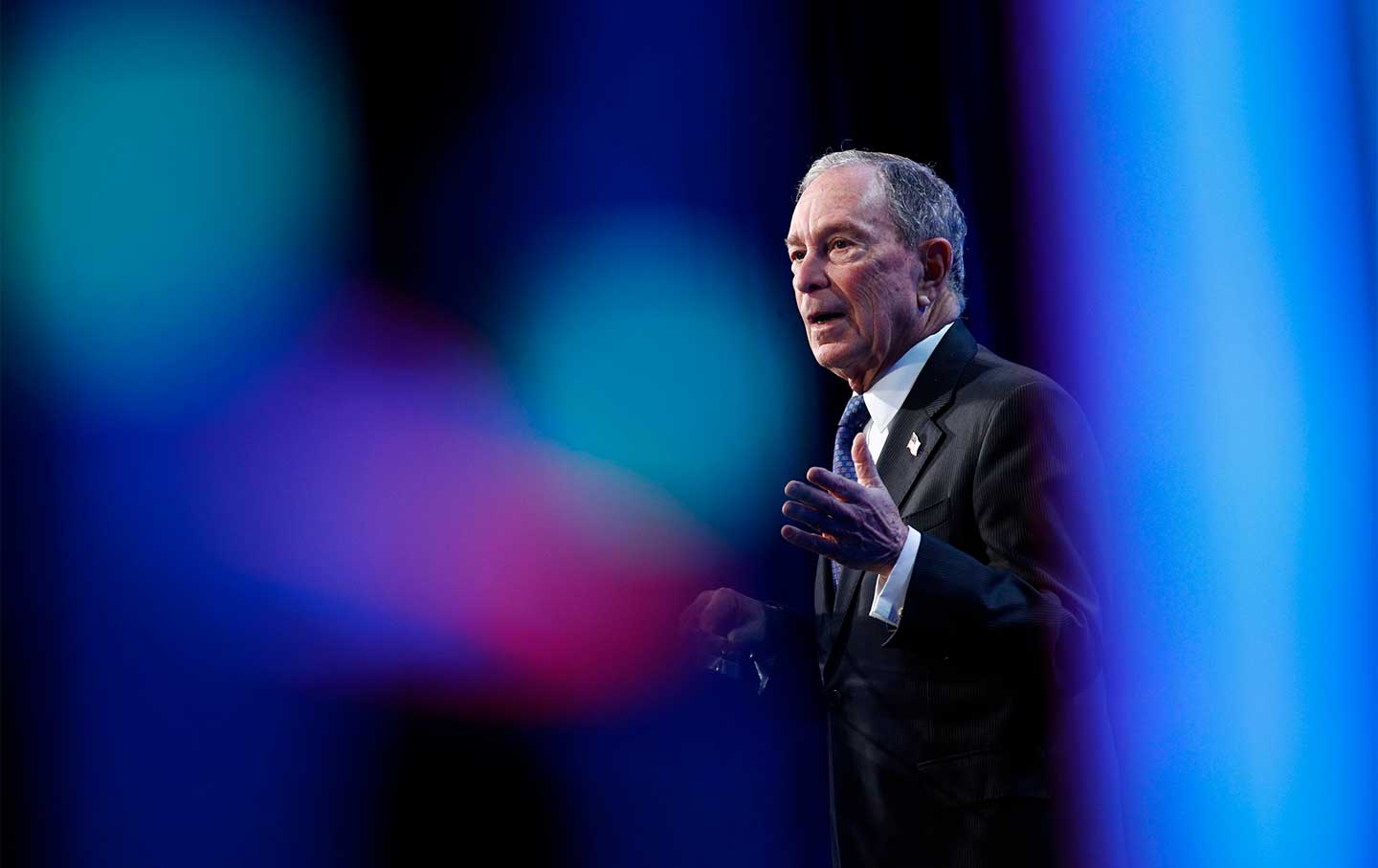 After the Democratic National Committee signaled Friday that it would abandon a grassroots-funding requirement that ensured candidates had to prove their appeal by attracting tens of thousands of small donations, Moore told a crowd of 2,500 that had packed into a cavernous concert hall near Des Moines, “You had to show you had a certain number of Americans that would give you a buck, that’s all the rule said, to show you have support. And that’s how they determine who would be on the debate stage. Today they removed that rule because [of] Mike Bloomberg, the billionaire, the Republican Mayor of New York City.”2

As Moore described the rule change, his rage was echoed by the crowd, which booed the DNC and cheered the filmmaker’s stark assessment of the party’s motivation.3

He doesn’t have to show he has any support among the American people, he can just buy his way onto the debate stage, and I’m going to tell you what’s so disgusting about this.4

I watched the debate in Iowa here two weeks ago—the all-white debate—and the fact [is] that the Democratic, the DNC will not allow Cory Booker on that stage, will not allow Julian Castro on that stage, but they are going to allow Mike Bloomberg on the stage? Because he has a billion fucking dollars!5

A roar of progressive populist outrage shook the venue.6

Moore’s been an enthusiastic surrogate for Vermont Senator Bernie Sanders in Iowa, where Monday’s caucuses officially launch the race for delegates to nominate the party’s 2020 candidate. Since the news broke Friday, there has been widespread objection to the rule changes, which will allow candidates to gain a place on the stage of the February 19 debate in Nevada by registering at least 10 percent support in four qualifying national, Nevada, or South Carolina polls—or 12 percent in a pair of qualifying polls from the two states. They can also qualify if they win convention delegates with a good finish in Monday’s Iowa caucuses or the February 11 New Hampshire primary.7

But the requirement that candidates show an ability to raise significant amounts of money from small donors—which DNC chair Tom Perez once defended by saying, “You can’t win the presidency in the modern era if you can’t build relationships with the grassroots”—are being scrapped.8

The DNC now says it has better measures, in the form of polls and caucus and primary results. But Bloomberg has declined to campaign in Iowa and other states where the process begins. Instead, he is spending heavily—almost $200 million by the end of 2019 and much more since then—on a national advertising campaign (including a $10 million Super Bowl ad) that aims at upping his poll numbers in time for later contests in delegate-rich states. Bloomberg’s numbers are rising, and there is mounting speculation that with the rule change he will make it into the Nevada debate.9

No one wants to exclude Bloomberg from the debates. In fact, there has been real concern about the lack of scrutiny faced by the wealthiest candidate. While other contenders have been required to prove themselves as policy-makers, fundraisers, and grassroots campaigners, Bloomberg has been able to surf a free-spending broadcast, cable, and digital media campaign into contention.10

There are plenty of Democrats who want to see whether Bloomberg can manage on a debate stage—and plenty who suggest he would have a hard time holding his own in fall debates with Republican Donald Trump, who has already begun to refer to Bloomberg as “Mini Mike.” But there is anger at the prospect that Bloomberg could get on the debate stage without playing by the rules that others—including another wealthy self-funding candidate, Tom Steyer—struggled to follow.11

“The DNC didn’t change the rules to ensure good, diverse candidates could remain on the debate stage,” declared Massachusetts Senator Elizabeth Warren, who like Sanders has been a stark critic of the influence of big money on politics. “They shouldn’t change the rules to let a billionaire on. Billionaires shouldn’t be allowed to play by different rules—on the debate stage, in our democracy, or in our government.”12

Former housing secretary Julián Castro, a candidate who dropped out and is now backing Warren, noted, “When [New Jersey Senator] Cory Booker led an effort to change the debate thresholds, the DNC refused—saying they couldn’t benefit any candidate. It seems the only candidate they’re willing to benefit is a billionaire who’s buying his way into the race. Total mess.”13

In a race that began with the most diverse field in American history, candidates who embodied that diversity, including Castro and Booker, have now left the competition—leading to complaints that debate rules were creating an “all-white” competition. But the DNC has refused to bend in the face of demands for a loosening of the rules—or to calls by grassroots groups for issue-focused debates on the climate crisis and poverty.14

On Friday, the Sunrise Movement mocked the DNC in a tweet that read:15

Frustration with the DNC’s move has been a feature of discussions on the campaign trail in Iowa. At a stop in Ankeny, where she spoke for Sanders, Congressional Progressive Caucus cochair Pramila Jayapal answered questions about the rule change in blunt terms. “There were ways to adjust the debate rules when you realized black and Latino candidates were being excluded, but they refused to do that,” she said. “They didn’t adjust the rules until Bloomberg.”19

Iowans have had a front-row seat for a long campaign, and there is heightened sensitivity to moves that change the rules after the contest has begun.20

Jade McMahon, a 19-year-old political science student at Grinnell College, was sitting at Grinnell’s Saints Rest coffeehouse, which has been packed for appearances by the candidates—including Sanders on Saturday and Booker when he was still running. “They made a rule change for the rich white guy but not the black guy,” she said. “It’s against what should be Democratic Party values to prioritize the sheer amount of money that a person has over the amount of people they have following them—especially when a candidate has attracted a lot of working-class support.”21

“It exposes the DNC for how they operate,” said the 20-year-old, who will caucus for Sanders. “I think it’s reprehensible. But I think it can only help Bernie.” Why? Calalang-LaCroix is betting that the candidate who has challenged the power of the billionaire class will do well in a debate with a billionaire who bought his way into the competition.23