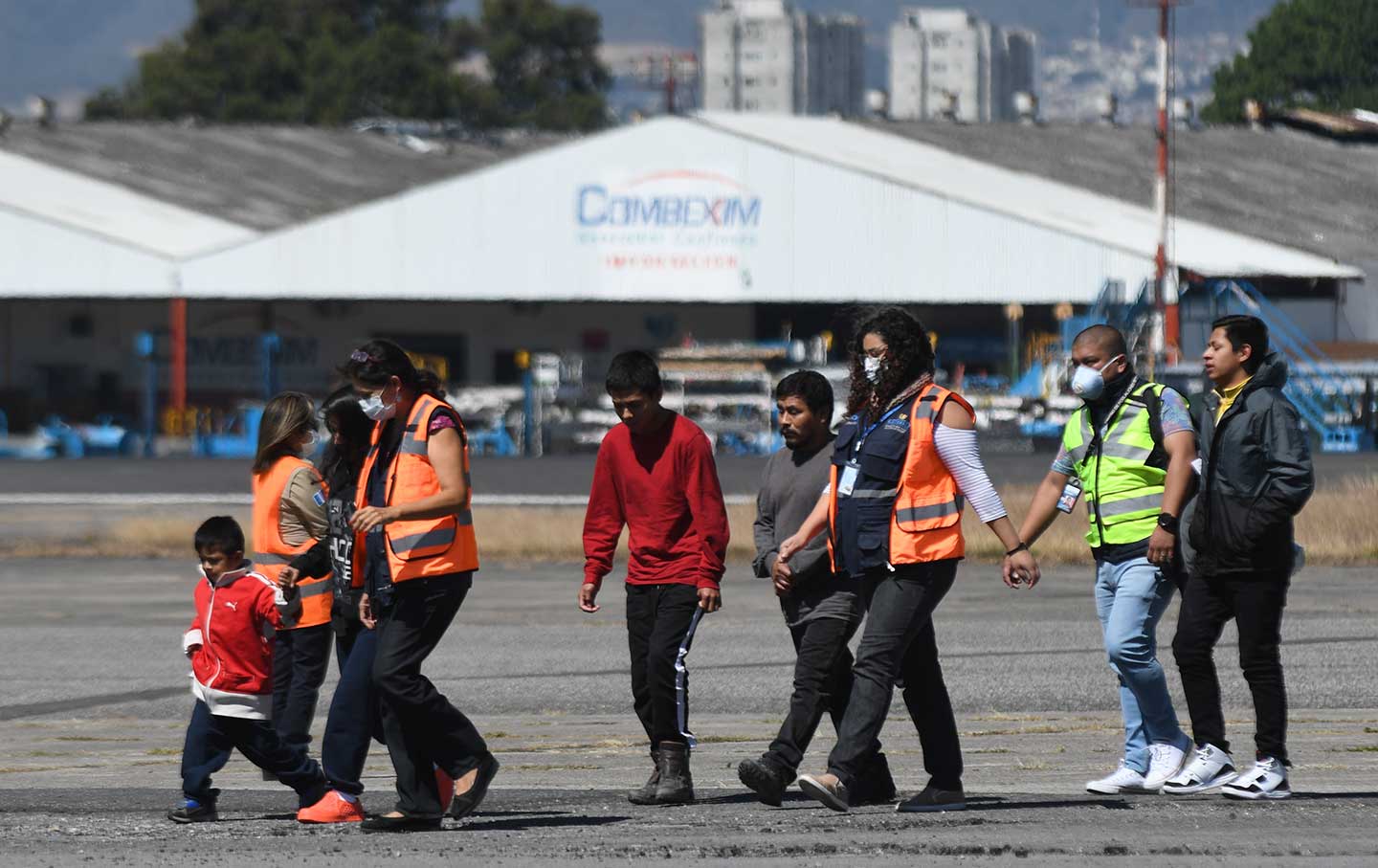 On March 16, two days after President Donald Trump declared the coronavirus outbreak a national emergency, Christina Brown, an immigration attorney in Colorado, got a desperate phone call from one of her clients. Héctor was locked in an immigrant detention center in Aurora, Colorado. He had just learned that Immigration and Customs Enforcement planned to deport him to Nicaragua.

“He called me panicked because he’d heard he might be removed any day,” Brown says.

In the week before Héctor called, two people had already died from Covid-19 in Colorado, and Brown herself had a fever and cough. Still, she kept managing her immigration law firm remotely as many of her clients fought deportation.

As cities across the world lock down and countries enact emergency travel bans, the United States has continued deporting immigrants at a steady rate. Though ICE released a statement explaining that it would cut back on some arrests and prioritize “public safety” risks, the deportation machine is still up and running. Court hearings for non-detained immigrants have been put on emergency hold, but—despite an unprecedented outcry from immigration lawyers, judges, and even ICE personnel—removal proceedings for detained immigrants, like Héctor, continue daily.

When Brown called ICE to confirm that Héctor was slated for deportation, ICE staff told her that Héctor had indeed been issued a final removal order; agents could put him on a plane to Nicaragua at any time. That flight would take Héctor from the United States—where more than 31,700 people have been confirmed to have contracted the coronavirus so far—to Nicaragua, a country that didn’t record its first case until March 19. Despite some attempts from Central American countries to halt deportations to prevent the spread of the virus, the Trump administration has successfully strong-armed at least one government into continuing to accept deportees.

“As far as [ICE] enforcement, things seem to be moving forward as if nothing has happened,” Brown says. “It’s really disturbing.”

After calling ICE, Brown called Héctor back and said she’d work to file an emergency motion to try to delay his deportation. However, she told him she wouldn’t be able to come visit him to prepare the case. Even if she were healthy, Brown says the risk of visiting detention centers during the pandemic would still be too high; she’s not visiting any of her clients.

The risk of illness spreading among any detained population is always serious, as disease jumps between people forced to live in close quarters. That danger increases substantially in ICE detention centers, which have become notorious for poor conditions in recent years.

On March 17, two days before Texas closed all schools and restaurants to try to slow the coronavirus, the immigration rights group RAICES reported that detainees in a family detention center in the south of the state had been told to wash their hands with shampoo after soap ran out.

Two days later, ICE announced a staff member at one of its privately run detention centers in New Jersey tested positive for Covid-19. However, the agency has maintained that there are currently no confirmed cases among members of its detained population, though some people have been placed in isolation after exhibiting symptoms.

Public health experts have warned there’s no way to safely detain people during a pandemic. “From an epidemiological perspective, you want to minimize the number of people in those detention facilities to whatever extent you can,” says Dr. Chris Beyrer, a professor of public health at the Johns Hopkins University and former president of the International AIDS Society.

“Keeping people in these crowded and dirty conditions, whatever the justification, is a terrible policy from the perspective of public health,” he says, noting that there are clearly documented cases of disease outbreaks in prisons and detention centers spreading into the surrounding communities.

In the midst of the pandemic, advocacy groups and individual attorneys have worked desperately to try to get immigrants out of detention, and back to homes where they can self-quarantine with their families. Some attorneys, like Brown, have filed motions for humanitarian release in light of the virus, but few have reported success with such a strategy.

Brown ultimately got an emergency stay on Héctor’s removal by arguing he hadn’t been properly notified about his court date. But she says it angers her that someone like Héctor—an asylum seeker with a wife and children in the United States—was even detained in the first place, especially during a pandemic.

“There’s just no reason for him to be detained,” Brown says “ICE just likes detaining people.”

The federal government has the discretion to parole almost everyone in ICE detention. “Despite what the administration says, the vast majority of people in ICE detention could be released instantly. Less than 40 percent of all people in ICE detention have any sort of criminal record, and even those who do have a conviction, most often those convictions are for nonviolent offenses like illegal entry—immigration-related offenses—or traffic violations,” says Aaron Reichlin-Melnick, policy counsel for the American Immigration Council.

Brown says she’s had to give her detained clients fighting deportation a difficult choice: risk their health by appearing in court, or stay in detention even longer. “They’ve chosen detention to protect other people’s health at the expense of their own mental well-being,” Brown says.

For detained immigrants, the threat of deportation—now during a pandemic—still looms. The administration has seemingly doubled down on removals, despite banning international travel from certain countries affected by the virus and trying to shut down the US-Mexico border. In an emergency budget request sent to Congress on March 17, the White House asked for $249 million in ICE funding, some of which would fund deportation flights. “With fewer commercial flight options,” the letter reads, “ICE charter aircraft are needed” so deportations can continue.

Trump, with his “Chinese virus” rhetoric and repeated calls to “close the border,” continues to place the blame on foreigners for the spread of the disease. At a March 20 press conference, Trump claimed that the United States needs to shut its borders to prevent migrants from infecting Americans. While some public health experts support travel restrictions, they say deportation only increases the risk of spread both inside and outside the country.

Detention and deportation not only increase the risk of transmission for immigrants in ICE custody—they also risk exporting the virus from the United States to countries unprepared to deal with mass outbreaks. Mexico, Guatemala, Honduras, and El Salvador take in thousands of deported nationals every month, and they may be forced to continue doing so even as the pandemic spreads.

The Guatemalan government said it would stop accepting deportees from the United States on March 17, at least until it implemented safety measures to prevent the virus from spreading from deportees to the rest of the population. Less than two days later, deportations were back on. El Salvador—whose president declared a national quarantine on March 11 before the country had a single confirmed case—stopped accepting deportees on March 18, according to Reuters. The Honduran government hasn’t formally stopped accepting deported nationals, but Honduran airports have been closed to international traffic, including deportation flights from the United States, for a week.

ICE said it will conduct temperature checks for all deportees and won’t put anyone on a flight if they’re exhibiting symptoms of any contagious disease or if their temperature exceeds 100.4 degrees. But experts warn that those precautions aren’t enough to effectively prevent transmission of the virus, particularly in light of reports that it can be spread by people without any symptoms.

“A person could have no symptoms today, get on the plane, and have symptoms an hour into the flight,” says Dr. Ron Waldman, professor of global health at George Washington University and board president at Doctors of the World. He adds that depending on how ICE detects temperature, it could be an unreliable measure. Infrared thermometers can fail to detect a fever if not used properly. Additionally, as ICE conducts the temperature checks in the actual line to board the “ICE Air” flight, anyone standing near someone with a fever will also be at risk for carrying the virus.

It’s likely that the United States will soon pressure Honduras and El Salvador to begin accepting deportees again. Andrew Selee, the president of the Migration Policy Institute, says Central American countries have little leverage when negotiating immigration policy with the United States. “This is President Trump’s signature issue,” he says, “and every country in the region knows that and knows there’s a limit to how much you can challenge the US government on its immigration priorities without paying some sort of consequence.”

If deportations continue, Central American countries will have to work harder to prevent transmission, an effort they have already begun. El Salvador’s national quarantine mandates that any national who arrives from abroad, including deportees, be isolated for 30 days. In Guatemala, all travelers returning from the United States will be quarantined at home; more than 300 Guatemalans are under quarantine as of March 17. However, if deportations stay at current levels, it will be essentially impossible for Central American countries to guarantee that all deported people remain quarantined for the required two weeks. Over 8,100 Hondurans were deported to their home country this January alone. 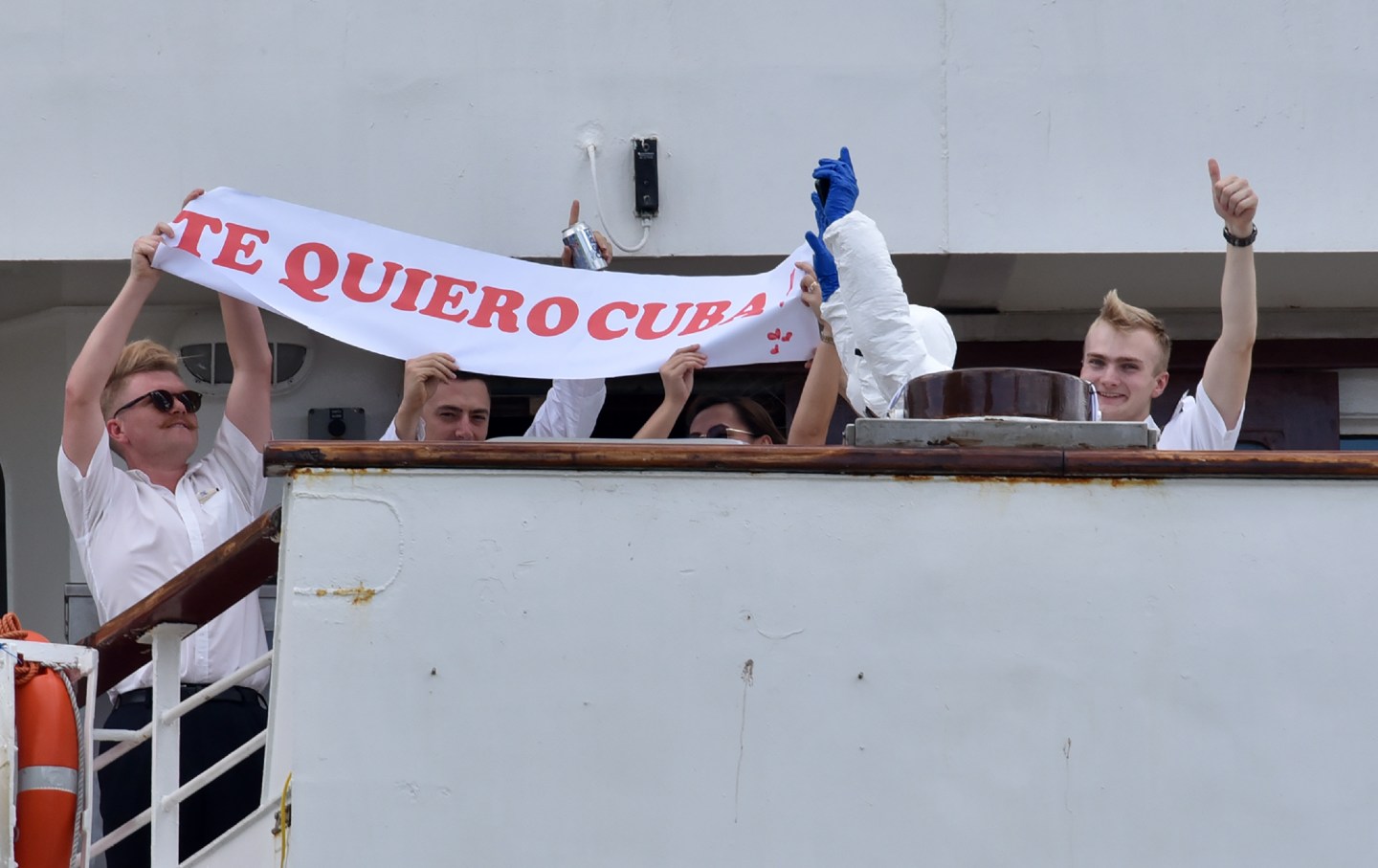 Central American countries have fewer coronavirus cases than the United States so far, but they may also be less prepared to deal with a mass outbreak—which, according to Maureen Meyer, the director of the Washington Office on Latin America’s Mexico program, may explain the drastic measures being taken there. “All of the countries throughout the region have very weak public health care systems and are very vulnerable to the coronavirus because of the lack of adequate hospital care, of ventilators, all the services you would need to attend to a high population that could be infected with the virus,” she says.

Ultimately, the administration’s desire to deport as many immigrants as possible may eclipse public health concerns. Charanya Krishnaswarmi, Amnesty International’s advocacy director for the Americas, says it’s difficult to stop deportations altogether, even if the public sees it as necessary.

“When we talk about this deportation machine—it truly is a machine. It’s really an industrial complex and it’s really hard to stop,” says Krishnaswarmi, citing both the growth in ICE’s budget as well as the profit for private detention facilities and other contractors. “Right now, we need to stop doing deportations, but that’s just physically really hard to do because of how much the gears are already in motion.”