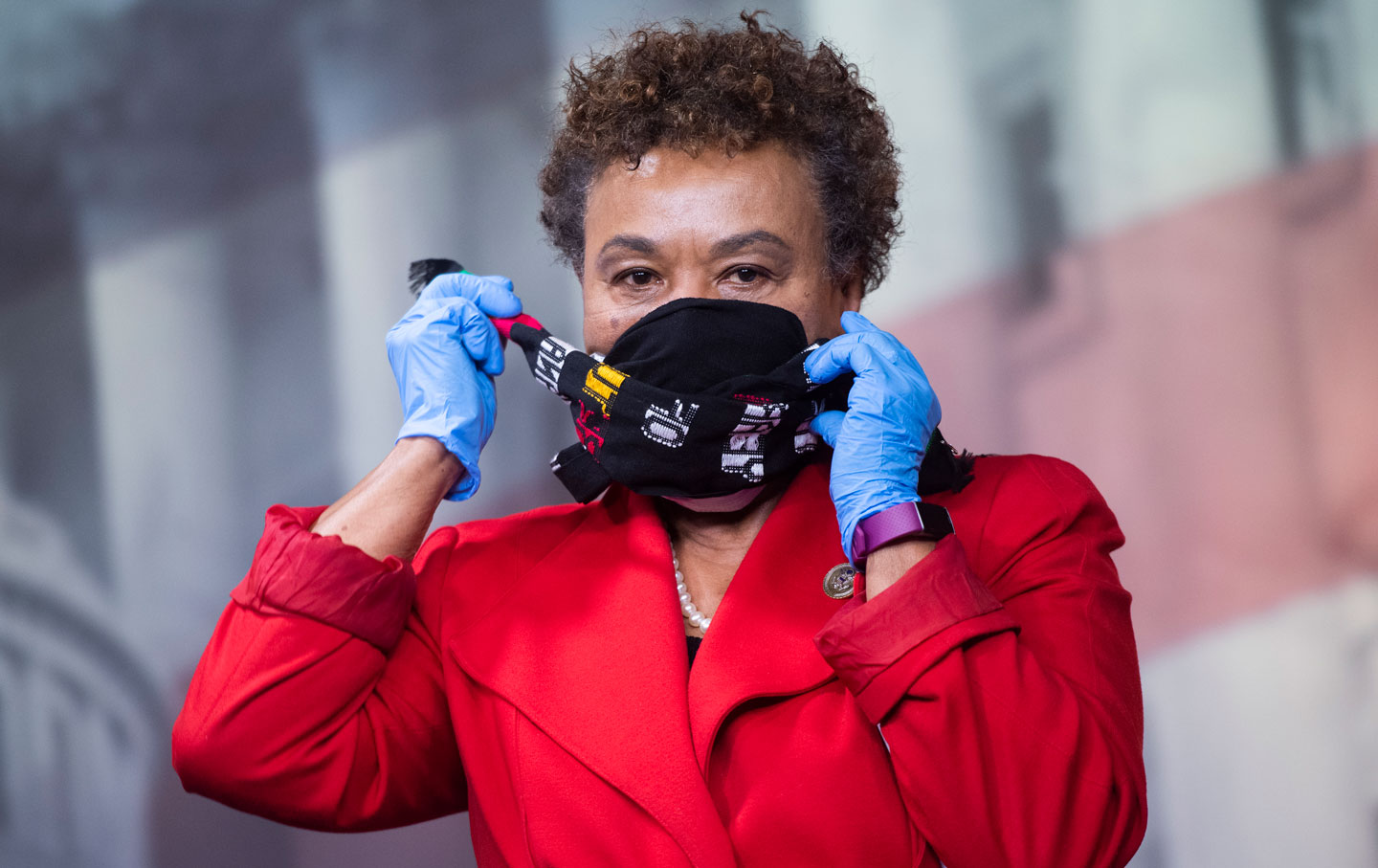 Barbara Lee tweeted a four-word message last week that made the connection between domestic and foreign policy that is too often neglected: “Defund the Pentagon budget.” The Democratic representative from California, who cast the sole vote against the 2001 Authorization for Use of Military Force that became an excuse for bloated military budgets and forever wars, has long argued for a reordering of priorities that places human needs above the demands of the military-industrial complex.

But the struggle is different now. A jarring moment shaped by the coronavirus pandemic, mass unemployment, and growing awareness that this country must address systemic racism and the climate crisis has highlighted the urgency of Lee’s argument. And the congresswoman who has stood alone more than once now has allies who are prepared to challenge outdated thinking and immoral calculations.

“Congress needs to prioritize our safety and our future, not more war,” says Lee. “The prioritization of defense spending and the underinvestment in public health has led to 10 times more deaths from COVID-19 than the wars in Iraq and Afghanistan. By over-prioritizing the Pentagon and military solutions, our country is drastically underprepared for any crisis that needs a non-military solution.”

Borrowing a page from the racial justice movement that calls for reallocating money from municipal police budgets to serve historically neglected communities, Lee speaks of the need to reallocate Pentagon spending to fund historically neglected domestic programs. She’s not talking about leaving the United States defenseless or abandoning the troops; Lee emphasizes the need to “provide the best for our men and women in the armed services…especially the more than 16,000 military families now living on food stamps.” But, she declares, “It’s time to cut weapons of war and prioritize the well-being of our troops, anti-poverty programs, public health initiatives, and diplomacy.”

Other members of House are joining Lee in her advocacy for new priorities. In May, Lee and Congressional Progressive Caucus cochair Representative Mark Pocan led a group of 29 Democrats in demanding that this year’s National Defense Authorization Act (NDAA) authorize a level of spending below last year’s budget. “In the last three years alone–during a time of relative peace–we have increased annual defense spending by more than $100 billion, almost 20 percent,” read the letter. “This has occurred during a period without any military action authorized by this Congress. Right now, the coronavirus is our greatest adversary. It has killed more than 90,000 Americans, far surpassing the number of casualties during the Vietnam War.”

“We are facing a crisis in this country and billions of dollars in defense spending increases won’t solve it,” explains Pocan.

“Year after year, we see taxpayer dollars line the pocket of defense contractors instead of supporting the American public. The enemy we’re fighting right now is COVID-19, so our sole focus should be on expanding testing, tracing, and treatment, funding towards vaccine development, and relief for the American people. Increasing defense spending now would be a slap in the face to the families of over 90,000 Americans that have died from this virus.”

As Congress wrestles with the new NDAA, Lee and Pocan have turned up the volume in the House. And they now have a high-profile ally in the Senate. “We need to cut our military budget by 10 percent and invest that money in human needs,” says Vermont Senator Bernie Sanders, the second-place finisher in the race for the 2020 Democratic presidential nomination. 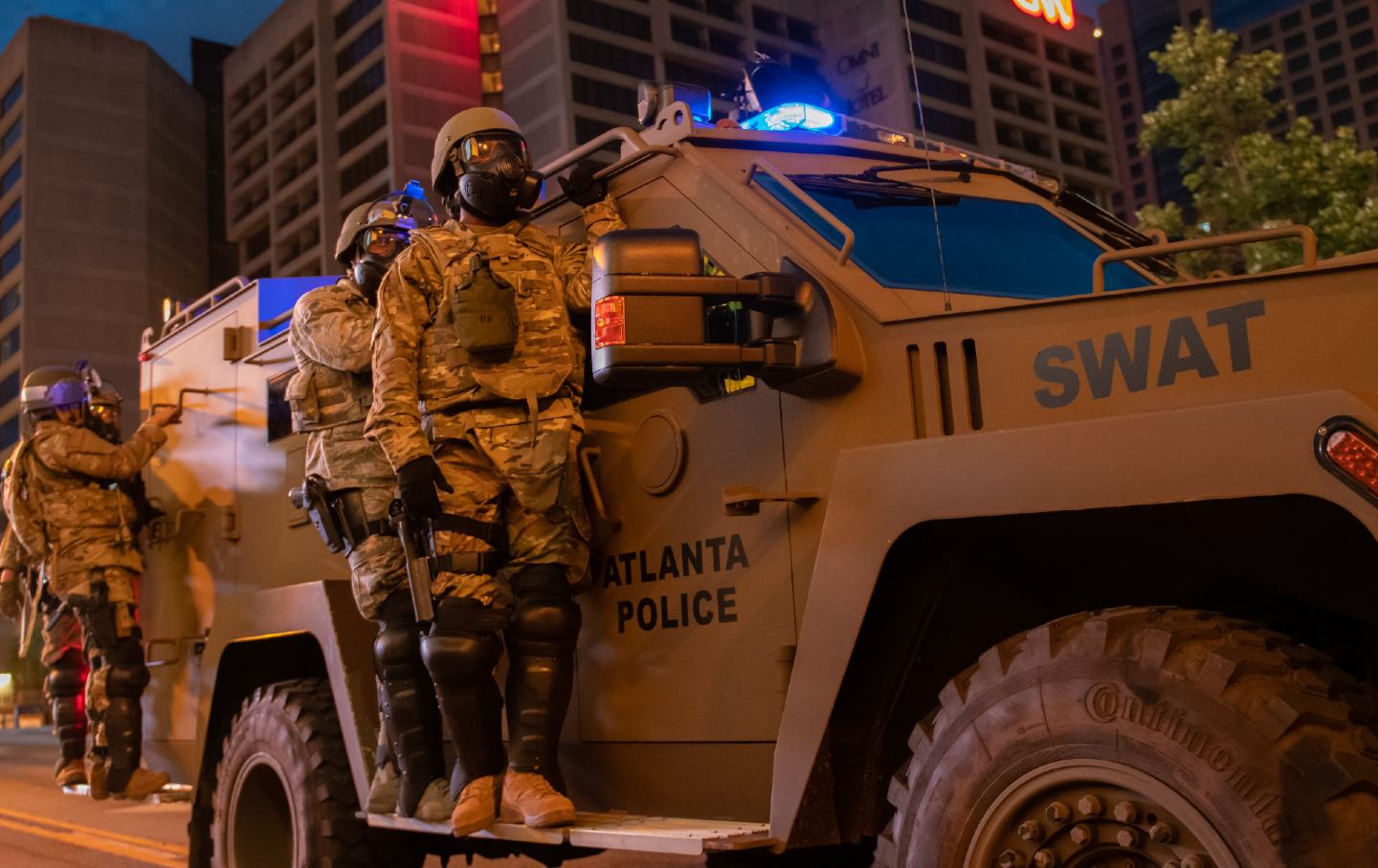 Defund the Police. And the Military, Too.

“If the horrific pandemic we are now experiencing has taught us anything it is that national security means a lot more than building bombs, missiles, jet fighters, tanks, submarines, nuclear warheads, and other weapons of mass destruction,” says Sanders. “National security also means doing everything we can to improve the lives of our people, many of whom have been abandoned by our government decade after decade.”

The amendment to the NDAA that Sanders has proposed, with support from Massachusetts Senator Ed Markey and from Lee and Pocan in the House, “would take $74 billion in annual savings from the Pentagon—exempting salaries and health care—to create a domestic federal grant program to fund health care, housing, childcare and educational opportunities for cities and towns experiencing a poverty rate of 25 percent or more.”

No longer standing alone, Lee sees a movement building, within the Democratic Party and beyond its boundaries. While this movement may not prevail this year, she points to a dawning recognition that “we cannot continue to prioritize funding for a department known for its waste, fraud, abuse, and failure to pass an audit—especially when the money to ‘protect national security’ is failing to protect our most vulnerable citizens.”