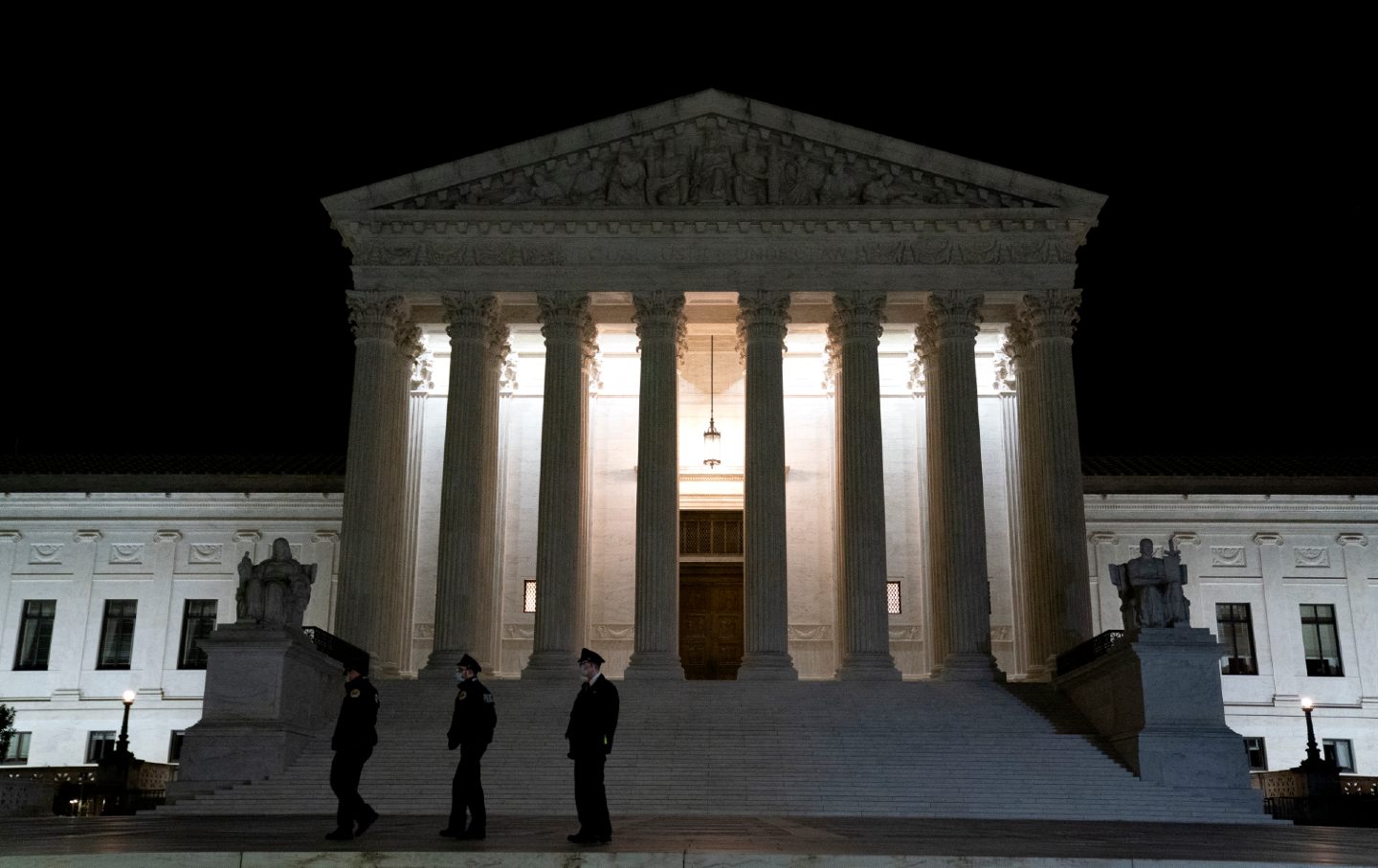 With Republicans rushing to replace Ruth Bader Ginsburg on the Supreme Court, America stands on the brink of a legal revolution. A Trump-nominated judge taking Ginsburg’s seat—which could in theory happen even if Trump loses in November and the Democrats regain control of the Senate—would open the door for an unprecedented radical shift to the right. With Republican-nominated judges possessing a 6-3 supermajority on the Supreme Court, some of the wildest ideas of Clarence Thomas and the late Antonin Scalia, hitherto reserved for dissents, could now become the law of the land.

The possible overturning of Roe v. Wade worries many liberals, but that would only be the beginning. Roe is a major target. Josh Hawley, a Republican senator representing Missouri, was admirably frank about the stakes of the court fight, writing, “Two months ago, I pledged to vote only for #SCOTUS nominees who understand and acknowledge that Roe was wrongly decided. I stand by that commitment, and I call on my fellow Republican senators to take the same stand.”

In the context of the current court, overturning Roe wouldn’t just mean reverting to the pre-Roe world where states set abortion law. Rather, Roe is likely to be overturned in a decision that asserts fetal personhood, which would make it difficult for even the most liberal states to protect reproductive freedom.

In the realm of economic policy, the right-wing legal movement led by the Federalist Society has been champing at the bit to restore the principles of Lochner v. New York (1905). The Lochner decision held that laws against overtime work violated the 14th Amendment. Long regarded as obsolete by mainstream legal scholars, a reassertion of the validity of Lochner could render vast swaths of the economic and environmental regulations of the last century unconstitutional. It would mean overturning not just Obamacare but much of the political legacies of Woodrow Wilson, Franklin Delano Roosevelt, and Lyndon Johnson.

This prospective legal revolution is all the more astonishing because it is built on partisan mendacity. In 2016, Senate majority leader Mitch McConnell blocked the nomination of Merrick Garland, Barack Obama’s choice to replace Antonin Scalia. Garland was denied even a hearing. Now, McConnell is flouting his own stated rule against a president nominating a Supreme Court justice in the final year of his term by promising to ram through anyone Trump nominates. As galling as it is for Democrats, McConnell’s brazen hypocrisy is paying huge dividends for Republicans.

Given the dangers of the present moment, Democrats are scrambling for a response. One popular idea is to expand the courts to dilute the power of Republican judges. On Friday, Massachusetts Senator Ed Markey tweeted, “Mitch McConnell set the precedent. No Supreme Court vacancies filled in an election year. If he violates it, when Democrats control the Senate in the next Congress, we must abolish the filibuster and expand the Supreme Court.”

But packing the courts presents some problems. For one thing, it requires a bold leader who is willing to overturn established norms, someone like Franklin Roosevelt, whose bid to expand the courts failed in 1937. But the Democratic nominee Joe Biden is no Franklin Roosevelt. In a Democratic primary debate in October 2019, Biden said, “I would not get into court packing. We add three justices; next time around, we lose control, they add three justices. We begin to lose any credibility the court has at all.”

For court packing to work, Democrats would have to first convince Biden. Given the stakes, that might be possible. If he is elected, Biden will soon learn that if he doesn’t push back against Republican judges, then his presidency will be strangled at birth.

Biden’s objections have some merit. If court packing sets off a tit-for-tat escalation, then it is only a stopgap measure. However, his second point, that court packing would undermine the credibility of the judiciary, misses the core political issue: undermining the credibility of the courts is necessary for Democrats if they are to achieve any of their policy goals.

Court packing shouldn’t be seen as simply a matter of achieving a partisan balance. Rather, it is part of larger project to tame the courts, to make them more responsive to the will of the majority. In recent decades, Republican judges have returned to the overweening arrogance of the early 20th century, with a willingness to strike down policy reforms that go against right-wing economic theory. A prime example is the Federal District Court decision in Texas overturning Obamacare, a case the Supreme Court is set to review.

This is not the first time the courts have been at war with majority rule. As Princeton historian Matt Karp noted, the achievement of Abraham Lincoln and other Republicans during the era of the Civil War and Reconstruction rested on a willingness to undermine the legitimacy of the courts that affirmed the justness of slavery. Writing in Jacobin, Karp observes:

Once in power, Lincoln and congressional Republicans “reorganized” the federal judiciary and “packed” the court, adding an additional justice in 1863. More fundamentally, though, they simply ignored the proslavery precedents established in the 1850s. In June 1862, for instance, Congress passed and Lincoln signed a bill banning slavery from the federal territories—a direct violation of the majority ruling in Dred Scott. The court meekly acquiesced, recognizing that its political power was long since broken.

Franklin Roosevelt’s bid to expand the courts in 1937 is often portrayed as a failed attempt at court packing. This is too narrow a view. It should be seen as a successful move to tame the courts. Prior to Roosevelt’s gambit, the Supreme Court was regularly overturning New Deal legislation. In their book How Democracies Die, political scientists Steven Levitsky and Dan Ziblatt are critical of FDR for what they see as an antidemocratic move. But even in their hostile rendition of the story, it is clear that FDR’s willingness to attack the legitimacy of the courts paid off.

As Levitsky and Ziblatt chronicle,

the Supreme Court itself played a major role in defeating Roosevelt’s plan. In a move that has been described as a “masterly retreat” to preserve the Supreme Court’s integrity, the previously anti–New Deal Court quickly reversed itself on a series of decisions. In spring 1937, the Court ruled in quick succession in favor of several pieces of New Deal legislation, including the National Labor Relations Act and Roosevelt’s Social Security legislation. With the New Deal program on more secure constitutional ground, liberal Democrats in Congress could more easily oppose the president’s Court plan.

Writing in The Atlantic, legal scholars Ryan D. Doerfler and Samuel Moyn make a compelling case for a politics focused on taming the courts, rather than just expanding the number of judges: “There are two basic types of reform,” they argue. “One type adjusts the personnel of the Supreme Court by adding justices, choosing them differently, or shortening their terms of office. The second kind disempowers the institution itself—removing certain cases from its jurisdiction, requiring a greater number of justices to agree in order to interfere with democratic choices, or letting Congress override any glaring mistakes.”

Doerfler and Moyn add, “Since at least the early 20th century, both progressive and conservative groups have called for Congress to strip federal courts of jurisdiction over controversial topics such as labor regulation, flag burning, or gun control. New Deal Democrats even proposed eliminating entirely the Court’s power to invalidate federal legislation. These reforms are fundamentally different from efforts to re-staff the Court; they recognize that the problem is not who serves on the Supreme Court but what power it has.”

A further advantage of taming the courts is that it moves power not just away from the judiciary but also away from the presidency. It restores power to Congress. You wouldn’t necessarily need a Joe Biden to press for policies to delegitimize the courts. Congress could advance those policies and give Biden the choice to take it or leave it. Given his longstanding inclination to work with his own party, he’s likely to jump on the bandwagon.

Packing the courts, by contrast, would require Biden to take the lead by pushing forward new nominees. Biden is demonstrably uneasy with any such move.

And if Biden were won over to packing the courts, that could also serve the purpose of taming the courts. As in the 1930s, court packing needn’t be seen as a merely partisan tactic but also as a deeply ideological one: It is an essential move to assert the power of democracy over the judiciary.