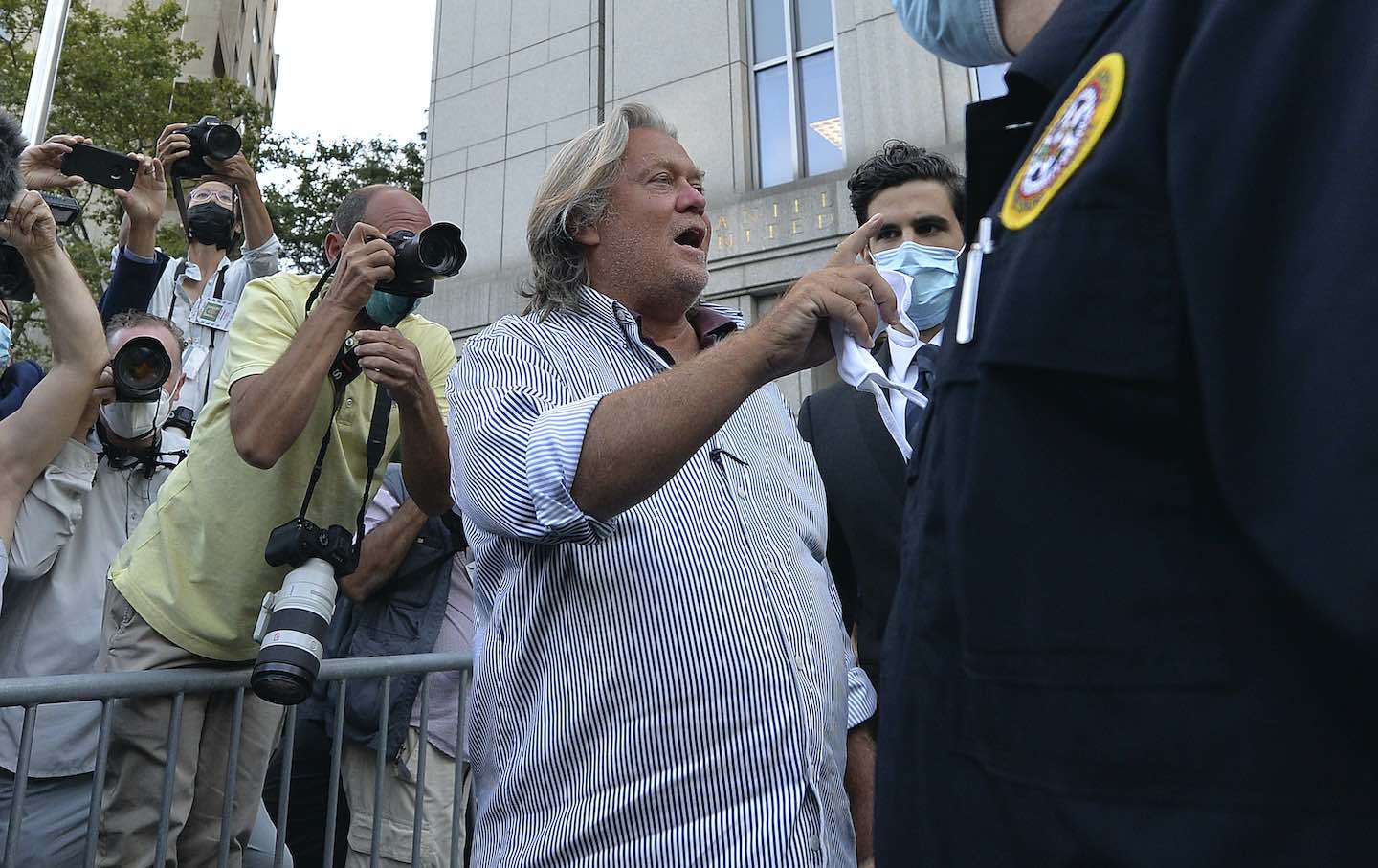 After the arrest of former Trump adviser Steve Bannon last week for allegedly defrauding hundreds of thousands of donors to a private organization with the stated purpose of building a wall along the southern border, We Build the Wall, administration officials have sought to distance themselves from the project. But Customs and Border Protection (CBP) leadership met with representatives of We Build the Wall to consider their offer of donating the privately constructed wall to the US government. CBP described it as “an overall positive meet and greet” and even provided the group with guidance on how to gift its wall to CBP, according to an internal CBP memo obtained exclusively by The Nation. 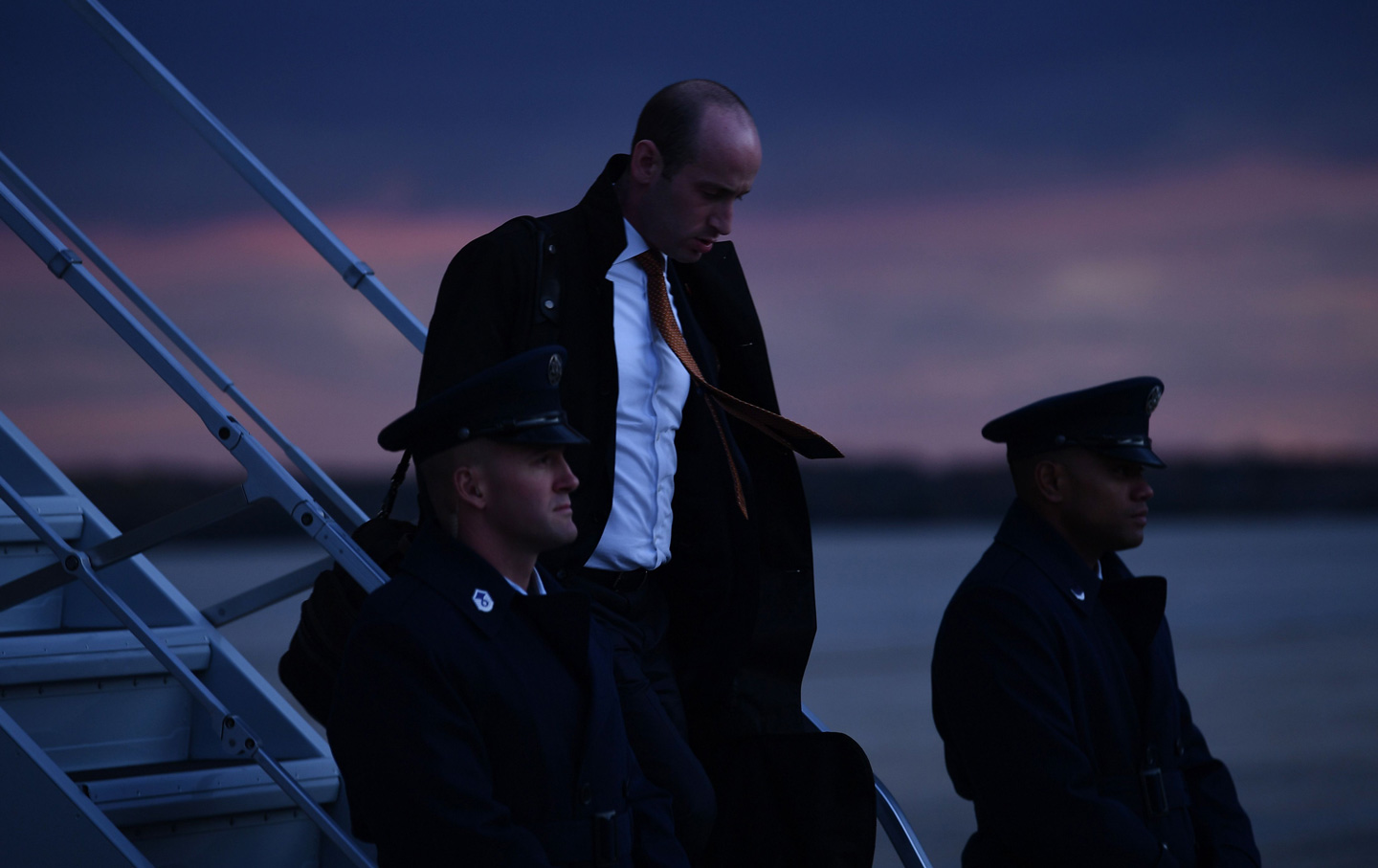 In a November 2019 meeting, CBP leadership—including Deputy Commissioner Robert Perez—privately advised representatives of the project on how to transfer the finished wall to CBP control using an obscure donation procedure, according to the memo. To assist the effort, CBP conducted an assessment of the group’s completed wall section section in Sunland Park, N.M., and provided it with the results of that assessment.

On November 26—five days after the date on the document—We Build the Wall issued a press release announcing that Department of Homeland Security (DHS) chief Chad Wolf had endorsed the project, purportedly calling it a “game-changer.” After the indictments, however, Wolf told CNN that he never endorsed the effort.

Marked for official use only, the memo is signed by DHS Deputy Assistant Secretary for Counterterrorism Ntina Cooper. It was provided to The Nation by a DHS source on condition of anonymity. The memo states:

In September 2019, CBP Leadership met with representatives of WBTW [We Build the Wall] in an overall positive meet and greet to discuss the completed wall section in Sunland Park, New Mexico. USBP [United States Border Patrol] representatives outlined the results of the operational assessment that was conducted on the project and identified some areas of concern and other approaches USBP takes when undertaking similar projects. WBTW representatives asked for clarification on what a donation offer would need to look like and whether CPB would be amenable to acceptance if an offer were made. Deputy Commissioner Perez expressed that CBP is interested in exploring all available options if an offer were made. WBTW was provided with CBP’s Barrier Donation Checklist.

The barrier donation checklist is not included in the memo but appears to be a list of criteria necessary for CBP to accept existing border wall segments as donations. According to the memo, the firm that We Build the Wall hired to construct the wall, Fisher Industries, inflated its capabilities. As an example, it contrasts Fisher Industry’s claim that it would need three to four working days to place 2,200 feet of wall panels with the fact that it took more than eight working days while working 24 hours per day.

“Performance during the execution period was not consistent with Fisher Industry claims,” the document states. “Their performance on this small project shows that some claims may have been inflated due to lack of experience with this type of work.”

Fisher Industries is a construction company headed by CEO Tommy Fisher, a frequent guest on Fox News and a Republican donor. Trump has reportedly lobbied in the past for major border wall contracts to go to Fisher Industries.

The memo goes on to describe a number of “challenges” to CBP’s accepting the border project’s construction, including a lack of environmental impact studies.

“If DHS/CBP were to engage in a NEPA analysis of the proposed construction, due to the cultural sensitivity of the Mount Cristo Rey site and likely controversy, the project would likely require a full Environmental Impact Statement, as opposed to an Environmental Assessment,” the document states. Mount Cristo Rey, in El Paso along the border with Juarez, Mexico, is considered a sacred site by many Catholics.

The memo also describes complications posed by the private border wall’s surveillance cameras, the details of which appear to be unknown to CBP:

The type of cameras installed is unknown. However, WBTW has indicated an intention to provide real-time access to four cameras to donors to their program. Security of cameras, data storage, data type, image format and transmission all remain unknown.

Last week, the Justice Department unsealed an indictment against members of We Build the Wall’s advisory board, including Steve Bannon, Brian Kolfage, and two others. Kolfage allegedly spent the skimmed money on a boat, cosmetic surgery, a golf cart, and jewelry; Bannon is accused of using what he took to pay down credit card debts. They face charges of conspiracy to commit wire fraud and conspiracy to commit money laundering, felony offenses that each carry a maximum penalty of 20 years in prison.

We Build the Wall, originally begun as a GoFundMe campaign in December of 2018, raised $25 million and boasts an advisory board studded with high-profile Trump administration associates like Blackwater founder Erik Prince and former Milwaukee sheriff David Clarke. In 2017, Clarke said he was offered an appointment to the DHS but was not hired after a CNN report that he had plagiarized his master’s thesis.

CBP did not immediately respond to a request for comment.