This column is part of Covering Climate Now, a global journalism collaboration cofounded by Columbia Journalism Review and The Nation to strengthen coverage of the climate story.1

Much has been made, and rightly so, of the Koch network’s impact on universities. Entire campus projects exist to ferret out Koch cash, which is powering everything from the Regulatory Studies Center at George Washington University to the Mercatus Center at George Mason University to the Center for Growth and Opportunity at Utah State University. The Koch strategy is straightforward: He who funds the research influences the research, and that research helps drive policy and public opinion.2

But the Kochs, while wildly successful at playing the university game, have been far from the only corporate kingpins on the board. And they weren’t the first or even the second to join in. Heck, they weren’t even the first oil tycoons to realize the potential power of manipulating the American higher education.3

That honor goes to Standard Oil of New Jersey (today known as ExxonMobil). In the late 1940s and early ’50s, two things happened to bring corporate investments to universities: World War II ended, and the tax codes changed. The tax changes effectively made university donations a write-off for private corporations. But it was the end of WWII that brought the ideological fervor. In a nutshell: The government had done a pretty good job of running America during the war. There was subsidized child care, for crying out loud! But the bigger issue was that the government instituted market controls like rationing and price controls as part of the war effort. This was all very patriotic, but it was bad for business.4

In 1944, PR legend Earl Newsom was working for multiple American companies, including Standard Oil of New Jersey and General Motors. As the war drew to a close, he drafted a confidential strategy memo laying out the problem:5

Next to crushing the Axis, and avoiding runaway inflation while we are doing it, the most important problem confronting us is to keep the American people convinced of the intrinsic social and economic worth of the free enterprise system and of its superiority over statism, so that the people will be determined to remove unnecessary governmental controls and reestablish competitive, democratic, free enterprise capitalism when the war is won.…6

Newsom went on to encourage his clients to redouble their efforts to “educate the American public” on the merits of capitalism. He suggested that they coordinate together, but not in any sort of obvious way.8 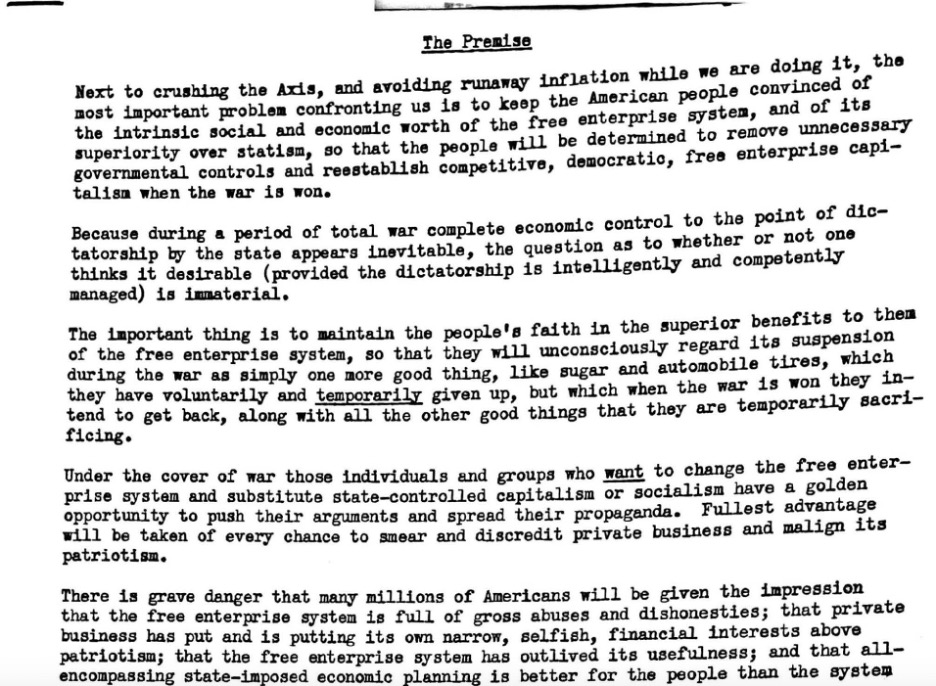 Around the same time, Newsom began working with Standard Oil Vice President Frank Abrams on a new initiative: investing in universities with a particular focus on pushing free enterprise ideas. Newsom’s two biggest clients at the time—General Motors and Standard Oil—were early movers in the university game. “If corporations do not intervene with generous donations, the federal government will by default be given this responsibility,” Alfred P. Sloan Jr., chairman of the board at GM, said in the early 1950s. “Government aid will mean increased taxes—with the final result that business will in effect be aiding…but without any freedom of choice.”9

In other words, if you donate, you get some say in how your donation is used; if you just pay taxes, well, then the government decides. In a 1953 speech, Standard VP Frank Abrams echoed his PR adviser Newsom’s concerns about protecting capitalism, and emphasized that universities were a crucial battleground in the war between “statism” and free enterprise. “Education, more and better education, is needed if we are to maintain that most cherished of man’s works—a free society,” he said. And then:10

As an example, there is a tendency on the part of some people to call on the government to take over more and more functions and responsibilities borne previously by citizens, acting as individuals or in voluntary associations. In each case, the claim is that private or voluntary group initiative has failed; that the public can better be served by a new government bureau. My observation of political history, both here and abroad, during forty years with Standard Oil Co. (New Jersey) provides evidence of how this thinking can develop even in a soil like ours where the tradition of democracy and free enterprise is well developed. Each time government takes over a new function the free society shrinks by that much. A step has been taken toward statism, a system holding great dangers for the general well-being of the country, and incidentally, for stock-holders’ investments in corporations. This is a problem with great dimension, in my view, but I think finally we can rely on a prudent and mature people—that is, an educated people—to deal properly with it.11

It’s worth noting that the US Chamber of Commerce was on the distribution list of Newsom’s postwar memo, and that Newsom explicitly advised against the Chamber’s coordinating any efforts to promote a free-market ideology. Too obvious. But by 1971, pro-business interests were apparently less concerned about optics. In the infamous “Powell memo,” Lewis A. Powell, a onetime tobacco lobbyist just months away from becoming a Supreme Court justice, tasked the Chamber with organizing a defense of American capitalism. He said the American free-enterprise system was “under attack” from “those who prefer socialism or some form of statism.”12

Powell was reacting, of course, to the social movements of the 1960s, particularly the civil rights movement and the consumer protection movement. He called out universities and the media as problems for giving these “attackers” a platform—especially consumer protection movement leader Ralph Nader, whom Powell described as “the single most effective antagonist of American business.”13

Then he wrote, “The time has come—indeed, it is long overdue—for the wisdom, ingenuity and resources of American business to be marshaled against those who would destroy it.”14

One of the first things Powell suggested was to target university campuses. He pinpointed the university as ground zero for all this anti–free enterprise thought, and went on for many pages about it. He suggested that the business community try to get more pro-business faculty, speakers, and textbooks. And that wealthy businessmen should think about starting centers on university campuses focused on free enterprise.15

One wealthy businessman was already preparing to do just that. Disturbed by a civil rights protest at his alma mater, Cornell University, John M. Olin, an American businessman who earned his billions manufacturing chemicals and munitions, decided to spend the rest of his life defending American free-market capitalism. Olin was already 80 at the time, but he jumped into battle, specifically targeting law schools, which he thought had a disproportionate effect on society and policy. Olin embraced the “law and economics movement,” which just sounds like words thrown together, but is an approach that weighs the value of any law or policy by its economic impact. John M. Olin Law and Economics Centers can now be found at most top-tier universities in the country. Olin was also a major funder of the Federalist Society and various conservative think tanks, and pushed climate denial for years. ExxonMobil and Chevron, the Eastern and Western branches of what had been Standard Oil, also continued their push into universities. The Kochs didn’t really jump in until the 1990s, but when they did, they went big.16

The Bradley Foundation, another fellow traveler in the Koch universe, also supports various policy centers and “anti-woke” endeavors on university campuses. It has been a big funder of campus “free speech” initiatives to protect conservatives, and its publishing arm, Encounter, is part of the current war on critical race theory. It has also been a big pusher of climate denial over the years, as has the Searle Freedom Trust, another foundation funded by a conservative billionaire hell-bent on “protecting free enterprise” and a frequent partner of both Bradley and Koch on various university investments.17

They are all connected, and that is the point: This is not one bad actor, or one campaign; this is a movement. It’s not new, and it’s not actually concerned with critical race theory or free speech or even climate change so much as it is with corporate accountability of any kind. These groups are not engaging in intellectual debate about particular issues; they are waging a decades-long ideological war about the economy, specifically how tied it is or isn’t to American identity and freedom. It’s reason number 1,000 that you cannot separate the push for climate action from the push for racial equity or voting rights or income inequality or worker rights (another thing these groups universally hate: unions). If the fight against all of those things is coordinated and connected, the fight for them has to be, too.18

What the Bradleys and the Searles and the Kochs of this world want is not just to ban a particular textbook or chase a particular professor off campus or block a particular policy, or at least it’s not just that, but to go back to a world before they were required to care about the public at all, before everyone had rights, before the government regulated business—about 1880 would be just right. They don’t even really try to hide that aim. The goal is corporatocracy, and we can either address this movement for what it is or continue to let it draw us into straw man arguments about what is or is not “cancel culture.”19