Richard Powers, author of The Overstory at the Cheltenham Literature Festival in 2018. (David Levenson / Getty Images)

“Wow! Look at that!” Richard Powers exclaims, pointing to a tree rising from the slope above us. Branches arch outward from its stout trunk, bark marbled in a greenish cast. The tree, which he identifies as a tulip poplar, looms over the slender young beeches that surround it. “That’s 20 feet at breast height in circumference,” he continues, amazed.

Powers, a novelist, has spent the last eight years studying and thinking about trees, an obsession that resulted in his 2018 novel The Overstory. The book—his 12th—is an expansive allegory about the relationships between trees and humans. The story weaves botany and dendrology together with mythology and the history of the timber wars of the 1990s, when logging interests and environmentalists on the West Coast of the United States fought sometimes violent battles over forests slated for harvesting.

The Overstory won the Pulitzer Prize for fiction. It also reconfigured Powers’s life, uprooting him from Silicon Valley, where he lived when the book began to take shape. Up in the Santa Cruz Mountains, he encountered a patch of uncut primary redwood forest, which got him thinking about how changed most other forests are by human appetite. That feeling was accentuated by a brief research trip to the Great Smoky Mountains National Park, which still contains pockets of virgin forest. He says he thought he knew what an eastern forest looked like, but in the Smokies he realized he’d had no idea. Almost a year later he decided to move to the park’s Tennessee foothills, where he lives today. When I asked him if he’d join The Nation for a drink, he suggested we meet for a walk in his adopted habitat.

Although Powers has lived in Tennessee for four years now, he still considers himself a “beginner” in the Smokies. He says he hopes to walk all of the park’s trails eventually. “Not in an imperialist, colonialist, toxic masculine mode,” he clarifies, laughing a bit, “but in an exploratory, humbled, and attentive mode.” The trail we’re walking today, which follows a creek at the park’s northeastern edge, is new to him. Powers—tall, slender, wearing two long-sleeve T-shirts and round glasses—speaks in deliberate, full paragraphs and walks at a mellow pace, stopping often to marvel or puzzle over something growing or rotting along the way.

The first lesson he offers is that sometimes the best way to figure out what’s growing around you is to look down. Studying the leaves and needles and seedpods beneath our feet, he does a quick accounting: “There’s tulip poplar seeds, eastern white pine, hemlock, maples, oaks. Basically you could make a one-meter square here and get 15 species of trees.” He points out three kinds of pine cone, the longest spanning my palm, the smallest the size of my fingernail.

Mariah Parker Invites You to Be Your Complete, Weird, Messy Self

“If you can’t read a forest, it’s a blur. You’re just looking at a lot of green things,” Powers says. But knowing too much can be its own kind of blindfold. “Your expectations can start to impede your ability to observe and to be present…. If you know what a hickory looks like and you walk by and you say, ‘That’s shagbark hickory,’ and you’re not present to it, you could miss something incredibly interesting about that particular shagbark hickory. It’s important to have sufficient expectation to make yourself present to something but not so much expectation that you blind yourself to what’s actually there.”

The Overstory is Powers’s attempt to get people to really see the forest, as well as how much is at stake as we destroy it. The book hums with tension between wonder at the complexity and splendor of the natural world and anguish for its destruction. It begins with a gutting account of the blight that wiped out the American chestnut across the Northeast in the early 20th century; later come fresh stumps oozing resin in a beloved city park and clear-cuts that look from above “like the shaved flank of a sick beast being readied for surgery.” Yet awe remains, in a solitary chestnut that survives the blight on a Midwestern farm or high up in the branches of Mimas, an ancient redwood where two of Powers’s characters spend a year, hoping to save it from the chain saw, or in an area of temperate rain forest in the western Cascades, thick with “the sheer mass of ever-dying life,” where a scientist makes discoveries that scramble the distinction between the human and nonhuman. “We found that trees could communicate, over the air and through their roots,” she explains. “That trees feed their young and synchronize their masts and bank resources and warn kin and send out signals to wasps to come and save them from attacks.”

Powers describes The Overstory as an experiment in attempting “to grant personhood, to grant character status, to grant subjectivity to the nonhuman.” While the book features plenty of human characters—including a gifted paralyzed computer coder, a psychology student studying environmental activists, a patent lawyer who spends most of his life defending private property, and a Vietnam veteran eking out a living by replanting clear-cut hillsides—all of them have relationships with distinct trees, which Powers treats as characters in their own right. (As for his favorite tree, he says he’s particularly fond of the pawpaw, an understory tree with a purple flower, leaves “like a 1970s necktie,” and fruit that tastes like butterscotch pudding.)

His interest in endowing nonhuman beings with agency was inspired by the 1972 article “Should Trees Have Standing?” by University of Southern California law professor Christopher Stone, which advanced an argument for giving legal rights to the environment. “The history of civilization can in some ways be seen as the gradual expansion of who gets to be a person,” Powers says as we walk up the trail. “Why stop with 23 chromosomes?” The light around us dims as we enter a tunnel of rhododendrons. “We grant personhood to companies…so why shouldn’t we be able to bring out a lawsuit on behalf of a river or a mountain or an ecosystem or a stand of trees?”

Beside the trail we see trees with roots like pillars, straddling the space left by logs that once provided nutrients and have since rotted clean away. Recalling dinner parties in Silicon Valley at which guests would discuss the possibility of the end of death, Powers points out that there are bristlecone pines that have been alive for 5,000 years and clonal colonies of aspens whose root systems are tens of thousands of years old. Developing “plant consciousness,” as he puts it, is a way to recognize that humans are not separate from this enduring system and its immense, cyclical timescale. “You kind of get less anxious about your own mortality,” he says.

We’re coming back down the trail now, out of the rhododendron tunnel and into the thin January sun. Powers picks up a seedpod from a sweet gum tree, a pocked globe sprouting spikes. “How does that shape come into being?” he asks, holding it in his palm. “Look at how byzantine it is, how complicated. Isn’t that great?” A few minutes later we encounter the massive tulip poplar, which we overlooked on the walk uphill. He radiates quiet pleasure at the sight of it. “That’s some tree,” he says. “Wow. I am very happy.”

I ask Powers how he sustains that joy in the face of constant reminders of degradation—the cotton-white clusters he points out on the underside of hemlock needles, egg sacs from a pest that is killing old trees in the park; the fact that many streams in the Smokies are still poisoned by acid rain; the uncanny warmth. “That’s the question,” he responds. “Not only how does a person who feels that alternate kind of joy and that alternate kind of pleasure and excitement sustain it in the face of a human exceptionalist, individualist, capitalist commodity culture but how do you communicate it to a person who doesn’t yet feel it? And then the grand prize, how do you reach a critical threshold where sufficient people in the culture feel it and are therefore willing to change the infrastructure of society?” 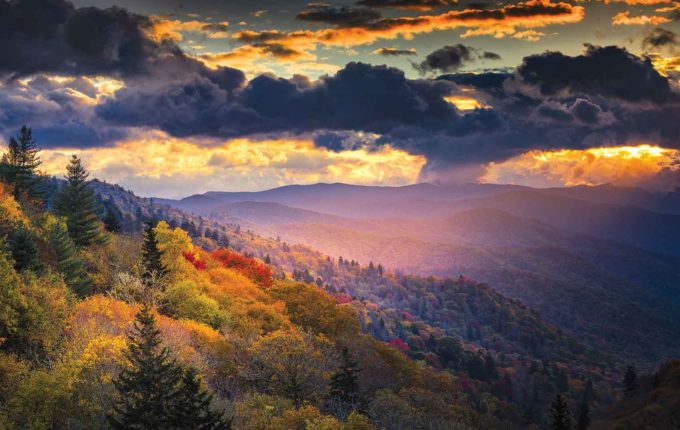 How to upend conventional modes of thinking and behaving is a question that The Overstory asks without fully answering. “I hate activists,” the book’s psychology student says at one point. “Anyone who gets righteous…doesn’t understand.” But by the end, he has joined their ranks, at great personal cost. When I ask Powers if the research for the book radicalized him, he says, “It certainly made me more capable of empathizing with people who were going over lines that I would have been uncomfortable crossing at the time.” In the timber wars he saw a precursor to our current politics, its rigidity and “violent undertones.” “Let’s say that we actually took into our heads and our hearts the idea that the interconnected living world is coming apart because of our actions and we do not have a lot of time. And let’s say that the system of property and rights and privileges does not budge. What can and can’t you identify with in terms of [the actions of] people who would like to have a future? That’s the question of the book, really, in miniature, and the question that we’re all facing right now.”

At the end of the trail, we sit on a moss-furred rock and drink tea from a thermos. Powers is already working on his next book, which will expand on the preoccupations of The Overstory.

Each of Powers’s previous novels emerged from a specific fascination—with music, artificial intelligence, sandhill cranes—that he felt he’d satisfied by the time he finished writing. Trees are different: They still have a hold on him. “Once you catch the bug,” he says, “you don’t lose it.”