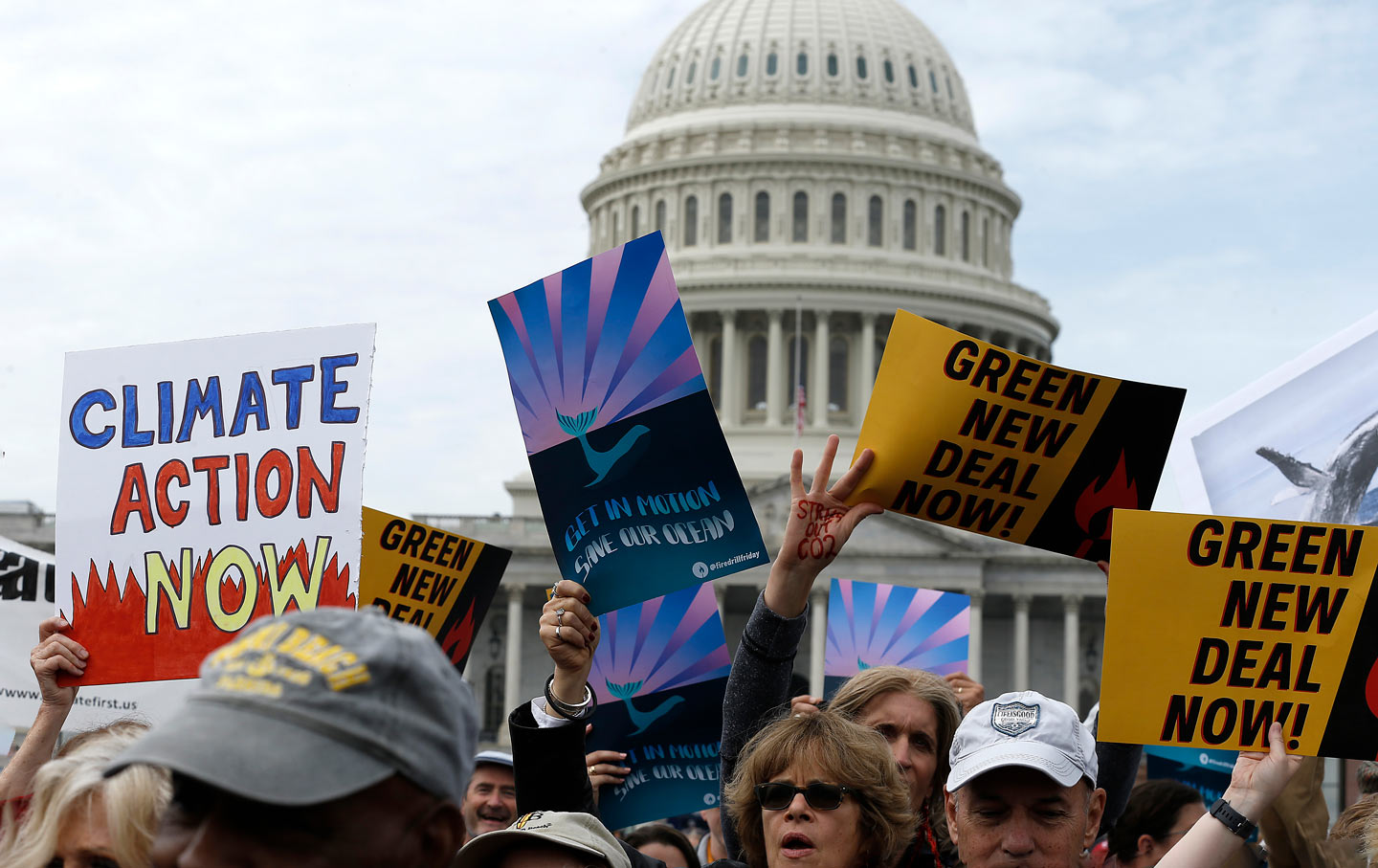 This article is adapted from “The Climate Beat,” the weekly newsletter of Covering Climate Now, a global journalism initiative strengthening coverage of the climate story.

In the first presidential debate, in September, Donald Trump was eager to attack his opponent’s $2 trillion plan to address the climate crisis. “He’s talking about a Green New Deal,” the president said, talking over Joe Biden. In the vice presidential debate, Mike Pence likewise assailed the Green New Deal, invoking the term 11 times as a threat that “literally would crush American jobs.”

While the Biden climate plan is indeed informed by Green New Deal principles—Biden calls it a “crucial framework”—its goals and methods are narrower in scope. Biden and his running mate, Kamala Harris, have stated repeatedly that they do not support a Green New Deal.

Nevertheless, Republicans’ efforts to demonize Biden’s climate plan as a Green New Deal inadvertently highlight how superficially many mainstream news outlets have covered that foundational proposal to date. Except for Fox News, which has devoted lots of airtime to trashing the idea with wildly inaccurate claims, most news outlets have covered the Green New Deal solely in horse-race terms and uncritically internalized Republicans’ negative framing of the idea. Some post-debate commentary, for instance, focused on whether Trump and Pence’s attacks on a Green New Deal could cost Biden votes in the battleground state of Pennsylvania. Meanwhile, the public has been left largely in the dark about the basic, underlying questions of what a Green New Deal actually is and what it would aim to achieve.

No matter which candidate wins the US presidential election, the Green New Deal is likely to remain central to debates about climate policy. If Trump wins, the climate movement and other opponents of his policies will continue to press for a Green New Deal in Congress and across the United States. If Biden wins, the Green New Deal will be the standard by which progressives in his party judge the new president’s approach. It’s past time for media coverage to spell out what a Green New Deal is and is not, how the various versions of it would work in practice—including the closely related Biden plan—and, above all, what it would mean to people’s daily lives.

In a word, journalists must demystify the Green New Deal. The public and policy-makers alike need a foundation of accurate information and fact-based analysis before they can intelligently decide whether to support this response to the climate problem, not to mention the ongoing economic contraction driven by coronavirus lockdowns.

That Republicans’ efforts have succeeded in making the words “Green New Deal” political poison is dubious. Polls show the general idea is actually quite popular with Americans, and more than 70 percent of Americans reject the notion that strong climate policy will hurt the economy. What seems most accurate is, as one poll by The Washington Post and the Kaiser Family Foundation found last year, that many Americans simply don’t know enough about the Green New Deal to form an opinion one way or another.

In this regard, the press has not helped. More than three in four Americans in the Post poll said they had heard “little or nothing” about the Green New Deal. Multiple studies from the research organization Media Matters for America have found that the Green New Deal is mentioned frequently on Fox News, typically in mocking terms, but almost never on CNN, MSNBC, and the major networks.

Even if the Biden plan is not exactly the Green New Deal, the latter is here to stay as a political idea, and not only in the United States. Versions of a Green New Deal have now been advocated by governments in Europe and Asia, as well as by various state and local governments in the US. And some congressional candidates have made a Green New Deal central to their appeal to voters. A new campaign ad for Mike Siegel, a Democrat in Texas’s 10th district, features a gravel-voiced worker saying that he and his fellow union members want Siegel “to bring our vision of a Green New Deal to Congress.”

To oversimplify, a Green New Deal aims to combat the climate crisis by creating an abundance of green jobs and business opportunities through targeted government investments. In that sense, it resembles the original New Deal of the 1930s, which combated massive unemployment creating jobs through government spending. Today’s Green New Deal, as outlined in the congressional resolution cosponsored by Representative Alexandria Ocasio-Cortez and Senator Ed Markey in early 2019, is more an ambitious statement of goals than an assemblage of fine-tuned policy proposals. It envisions a broad mobilization of government resources, creating millions of jobs and corresponding business opportunities, to curb greenhouse gas emissions while building up renewable energy and green infrastructure.

The differences between Biden’s plan and the Green New Deal are important and deserve attention from reporters. It’s worth remembering that Biden’s plan emerged from negotiations between members of his campaign and progressives in the Bernie Sanders camp, following Biden’s victory in the primaries. The core of the Biden plan is its pledge to decarbonize America’s electricity sector by 2035. Borrowing from the Sanders approach, the Biden plan also stipulates that 40 percent of federal climate spending will occur in communities of people of color and the poor, who historically have endured the most damage from fossil fuel pollution. The Biden plan leaves out some of the Sanders camp’s other social-equity goals—on health care and housing, for example—but the focus on the economy remains central. “We can get to net zero, in terms of energy production, by 2035…creating millions of good-paying jobs,” Biden said during the debate.

Meanwhile, the science is clear: Avoiding catastrophic amounts of temperature rise demands rapid, far-reaching decarbonization of the world’s economies. Emissions must be cut in half by 2030 to limit temperature rise to 1.5 degrees C, the scientists of the UN’s Intergovernmental Panel on Climate Change said in 2018 in their landmark Global Warming of 1.5 C report. Achieving this goal will require transforming economies at a pace “unprecedented” in human history, the scientists said.

This moment—arguably America’s last to get the climate issue right—demands that the press do a much better job of explaining these scientific and economic realities to their audiences. Trump, according to his own words and actions, has no plan on climate. Biden does have a plan, one that is informed by, but ultimately different from, the Green New Deal. Rather than contributing to an environment in which the words “Green New Deal” are treated as a political liability, good journalism should assess both candidates’ plans on their merits and inform the public accordingly. That means also finally telling audiences the truth about the Green New Deal.