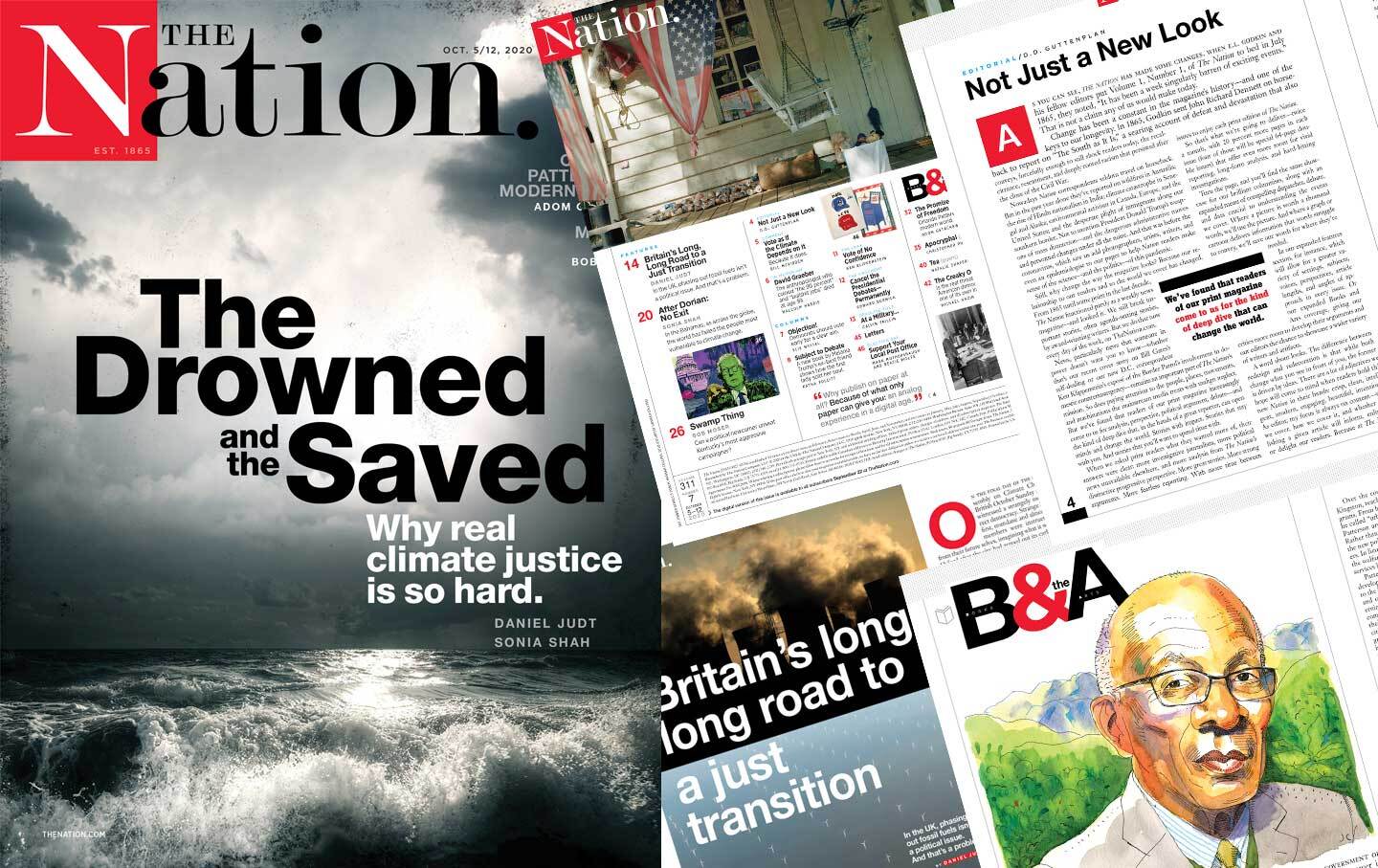 New York, N.Y.—September 22, 2020—The Nation, America’s leading source of progressive politics and culture, is unveiling a wholly redesigned print magazine—and a new look with a new logo—as of our October 5/12, 2020, edition. With 20 percent more pages in each issue, and four special, 64-page double issues per year, the new Nation offers even more room for vivid reporting, long-form analysis, and hard-hitting investigations.

Nation editor D.D. Guttenplan introduces the redesign and explains the logic and logistics of our new aesthetic in an editor’s note today. He writes:

Why change the way the magazine looks? Because our relationship to our readers and to the world we cover has changed. From 1865 until some point in the last decade, The Nation functioned partly as a weekly news magazine—and looked it. We still break important stories, often agenda-setting stories, by award-winning writers. But we do that now every day of the week, on TheNation.com.

When we asked print readers what they wanted more of, their answers were clear: more investigative journalism, more political news unavailable elsewhere, and more analysis from The Nation’s distinctive progressive perspective. More great stories. More strong arguments. More fearless reporting. With more time between issues to enjoy each print edition of The Nation. So that’s what we’re going to deliver.

The reimagined product offers a clean, crisp, and modern refresh of our print magazine that better serves the kind of journalism our readers want most. It is an investment in The Nation’s orientation toward impact—and its commitment to truth-telling. Rising above the frenetic pace of today’s news cycle, The Nation’s print issue gives pause, grounding, and brings context and history to bear on the present moment.

It is also a decision about how people get their news today, what kind of journalism makes sense for which platforms, and how to best reach our growing audiences with the content our readers want—when and how they want it. In the rapid-fire, 24/7 media marketplace with so much breaking news online, including at TheNation.com, many have told us they get their news online and want greater depth in print.

And the redesign is unabashedly print. A page feels like a page. The redesign lets long-form, expansive journalism breathe, rather than try to mash the website experience into print. The result is sharp, intentional, and uncluttered. In a world where we consume so much online, there is renewed appreciation for the value of, and affection for, print as a medium: This redesign creates a richer and better experience with that print product.

The print redesign was handled in-house by our creative director, Robert Best, and it will inform a digital overhaul in 2021. The redesigned logo, marking the broader redesign, retains the history of the magazine’s logo, yet brings it forward: The classic logo type is now layered with a clean modern red square, and there is a strong contrast echoing the past and marking the next chapter. The new look is bold, eye-catching, and leans to the left—all appropriate for The Nation.

With 20 percent more pages in each issue, and four double issues per year, the new Nation offers more space to:

In the inaugural print issue, “The Drowned and the Saved,” a two-part cover story for the first redesigned issue, marks The Nation’s signal commitment to one of the most pressing crises of our moment: Why real climate justice is so hard. Daniel Judt reports on Britain’s long road to a just transition phasing out fossil fuels; why that isn’t a political issue in the UK, and why that’s a problem. On the ground from the Bahamas after Hurricane Dorian, the Category 5 monster storm that pummeled the north in September 2019, Sonia Shah witnesses how in the Bahamas, as across the globe, the world has failed the people most vulnerable to climate change. And a searing profile of Mitch McConnell, “the jowly old swamp monster from Washington, D.C.,” by longtime contributor Bob Moser, presents The Nation’s signature blend of wit, political acuity, and colorful reporting on one of the most dramatic campaigns of the upcoming election cycle.

In addition to regular editorials and commentary from our terrific columnists like Katha Pollitt, Elie Mystal, Eric Alterman, and Kali Holloway, new regular front-of-book rubrics will offer fresh ways to engage with, provoke, and galvanize our readership: “The Argument” offers a concise, occasionally contrarian, always pointed case for or against a pressing issue of public importance. “The Leak” makes space to showcase and decode the leaks and FOIA’ed documents obtained by our DC bureau—and translate them into plain English. “Dateline” and “Postcards” will feature dispatches from the places across the country—and around the world—that we think you need to hear from. And “The Debate” will host a rigorous, rotating cast of contributors weighing in on opposite sides of propositions roiling the progressive community.

And, finally, in “Books and the Arts,” the freshly redesigned magazine will feature even more pages of essay-reviews and criticism from some of the country’s leading intellectuals, novelists, academics, and critics. Ever since the “back of the book” was inaugurated, it has been home to writers tackling some of the most pressing questions of the day—whether relating to American democracy or contemporary literature—and the magazine will now feature an expanded section, full of even more cultural commentary and intellectual debate. This week’s issue features Adom Getachew on Orlando Patterson and the postcolonial predicament and Michael Kazin on the ever-present thorn in our democratic side: Will we ever get rid of the electoral college? The forthcoming Fall Books special issue will feature Randall Kennedy, Manisha Sinha, Elias Rodriques, Anya Schiffrin, Lovia Gyarkye, Jeet Heer, and Charlie Savage.

Nation editor D.D. Guttenplan and Robert Best, the creative director who shepherded the redesign to fruition, are available for select interviews. For requests or further information, please see contact information above.