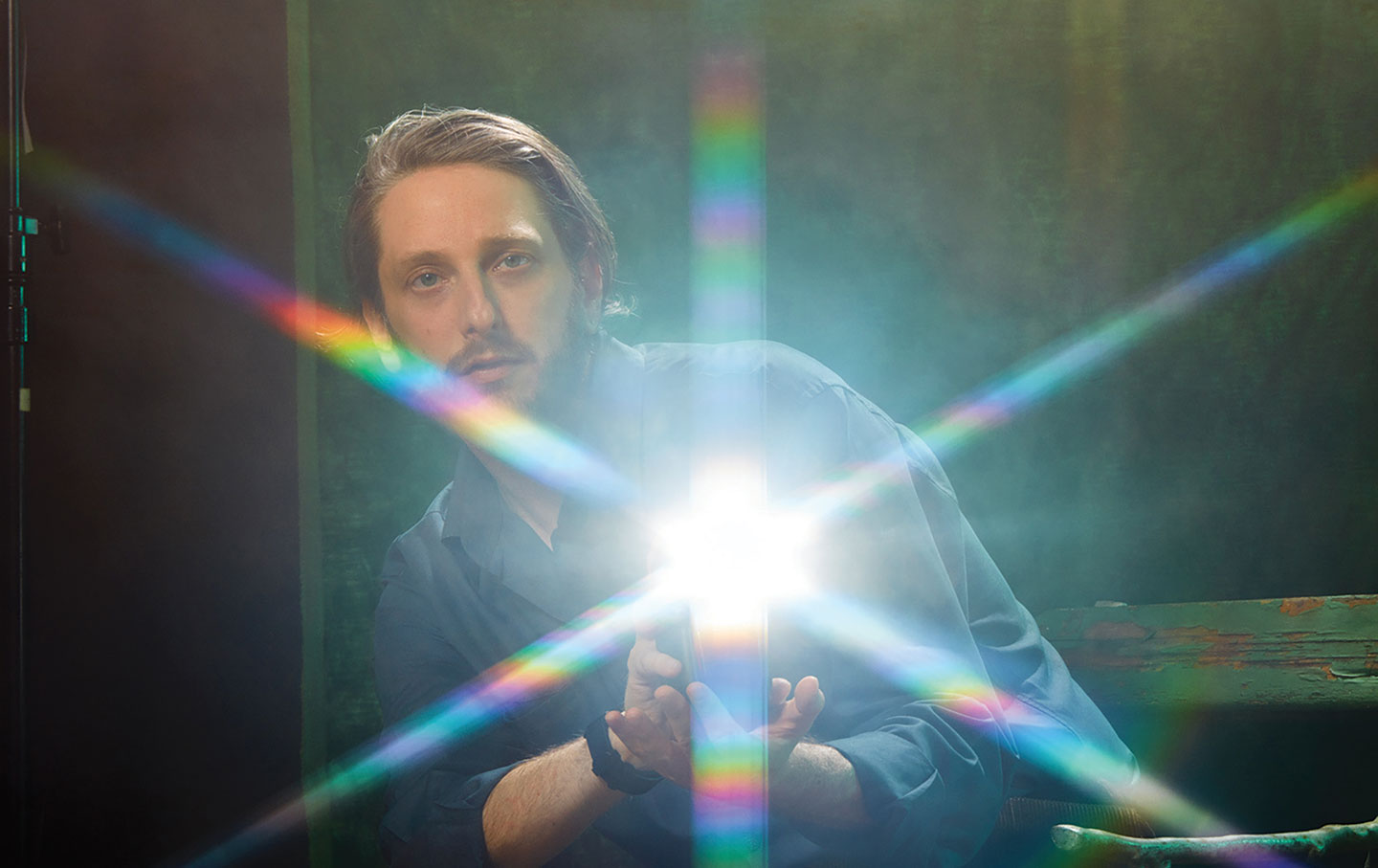 Magic Oneohtrix Point Never, the latest album from Daniel Lopatin—who records under the name Oneohtrix Point Never—feels as though it’s been beamed from the antenna of a deep space probe directly into your ears. The album registers like a radio broadcast from another reality, perhaps one parallel to our own, almost inchoate and yet somehow fully formed.

Part of that otherworldliness comes from the way Magic Oneohtrix Point Never is structured. It hangs around a series of cross-talk interludes, which are themselves mashed-up FM broadcasts recorded across America. They spin between daytime and nighttime talk formats—morning news chatter and sultry call-in shows collaged with and against each other—and the effect is orienting: The mood of each interlude attunes the listener to new frequencies.

The album progresses in this way, with each track making psychic room for the one that comes after it. The journey was intentional, Lopatin told Apple Music. “You’re in alarm clock territory,” he said. “You’re waking up kind of inside the fucking radio, not listening to it. I really want the setting of the album to be almost within a kind of psychic environment—Magic Oneohtrix Point Never as a radio station. So you’re waking up. Time to get on with the day.”

And a salient feature of radio, of course, is that it takes a certain amount of agency away from its listeners: You willingly submit to the songs that are chosen for you. Magic Oneohtrix Point Never is programmed in the same way; the tracks go from shimmering noise to gonzo pop music and back again. But the slides between forms and genres are always considered, and there is ever-present evidence of a guiding hand at the wheel. It’s like listening to an afternoon DJ set made just for you.

Lopatin came up through the Brooklyn noise scene of the mid-aughts before detouring through what the writer David Keenan evocatively termed “hypnagogic pop,” music sleepily refracted through artifacts of ’80s nostalgia, like lines from forgotten TV commercials. Lopatin hit the big time with his 2009 compilation album, Rifts, which won international acclaim, and has remained incredibly productive since then—Magic Oneohtrix Point Never is his 12th studio album, including his film soundtracks—becoming one of the most influential electronic musicians of the past decade. His work has slinked between noise, collage, found (recovered?) sound, and something like classic minimalism. Lopatin’s musical corpus is the carefully assembled document of a restless, roving mind. Lately he’s been exploring more sonically accessible turf, centered around warm strings and the human voice.

The new record is closer to Lopatin’s 2018 record, Age Of, than it is to his other recent and arguably better-known work: the acclaimed scores to the Safdie brothers’ films Good Time (2017) and Uncut Gems (2019). These albums all play with mood in the same way, however. The scores are corrosively electronic, a barreling soundtrack to films that never let up. The song “Romance Apocalypse” from Good Time is instructive; it’s the sound of New York City as a consummated cyberpunk dystopia. Age Of, on the other hand, is human-sized, so much so that it mimics being inside Lopatin’s head. Intrusive thoughts are modeled alternately as bursts of static and noise, and musical lines feel like they’re being deconstructed in real time.

Magic Oneohtrix Point Never sometimes trades its melodies for abstraction, but it’s more concerned with propulsion. Between “Auto & Allo” and “I Don’t Love Me Anymore,” there’s a sense that Lopatin is embracing pop (albeit from that other, wordless place). The midsection of the album, “Bow Ecco” and “The Whether Channel,” has a backbone of palate-cleansing bleeps and buzzing; then the album resolves into the gorgeous “No Nightmares,” which is basically Lopatin channeling soulful, quiet-storm radio playlists into something wholly his own.

No doubt that’s partly due to the influence of singer Abel Tesfaye—aka the Weeknd—who co-executive-produced the album and whom Lopatin worked with on Tesfaye’s album After Hours. If you’re careful, you can catch other collaborators’ voices here as well. The electronic songstress Caroline Polachek appears on “Long Road Home” and “No Nightmares,” and you can hear experimental producer Arca’s influence on “Shifting,” for which she contributed vocals. The collaborations expand Lopatin’s scope; Magic Oneohtrix Point Never feels less airless than some of its predecessors. Even so, it doesn’t necessarily read as a collaboration—it’s sonically coherent in the same way a novel might be, as a contribution from a single voice.

As Magic Oneohtrix Point Never nears its close, things become increasingly chaotic. There’s more static and more experimentation with voices and sonic textures. “Lost But Never Alone” is a standout—an emotional manifesto that serves as a kind of summation of what’s brilliant about the album as a whole. It combines Lopatin’s more experimental ideas (noisy guitar scuzz, buried and pixelated vocals) with a beautiful melodic line and a thumping bass beat that wouldn’t sound out of place on a power ballad. The effect is hallucinatory.

The other late tracks, on the other hand, are sweeter. “Wave Idea” is adorned with samples of birdsong, and the electric strings sound like the morning dawning after you’ve been up all night; it’s the soundtrack for your walk from the club to an all-night diner. The album’s closer, “Nothing’s Special,” ends the proceedings on a high note: It’s about becoming enchanted with the little things in life again. “With that said, I’m still impressed / At how special nothing gets if you stare long enough,” Lopatin sings.

Despite its beauty, Magic Oneohtrix Point Never doesn’t seem like a magic trick. Rather, Lopatin has made a piece of art that sounds as if it has always existed, channeled from somewhere in the subconscious of the American airwaves. Which is perhaps why it can stand as a summary of his musical career; more than anything, the Oneohtrix Point Never project feels like it’s mapping the magical underside of our workaday lives. It’s like turning over a rock and finding a stream of silverfish there, which then burst into flight.