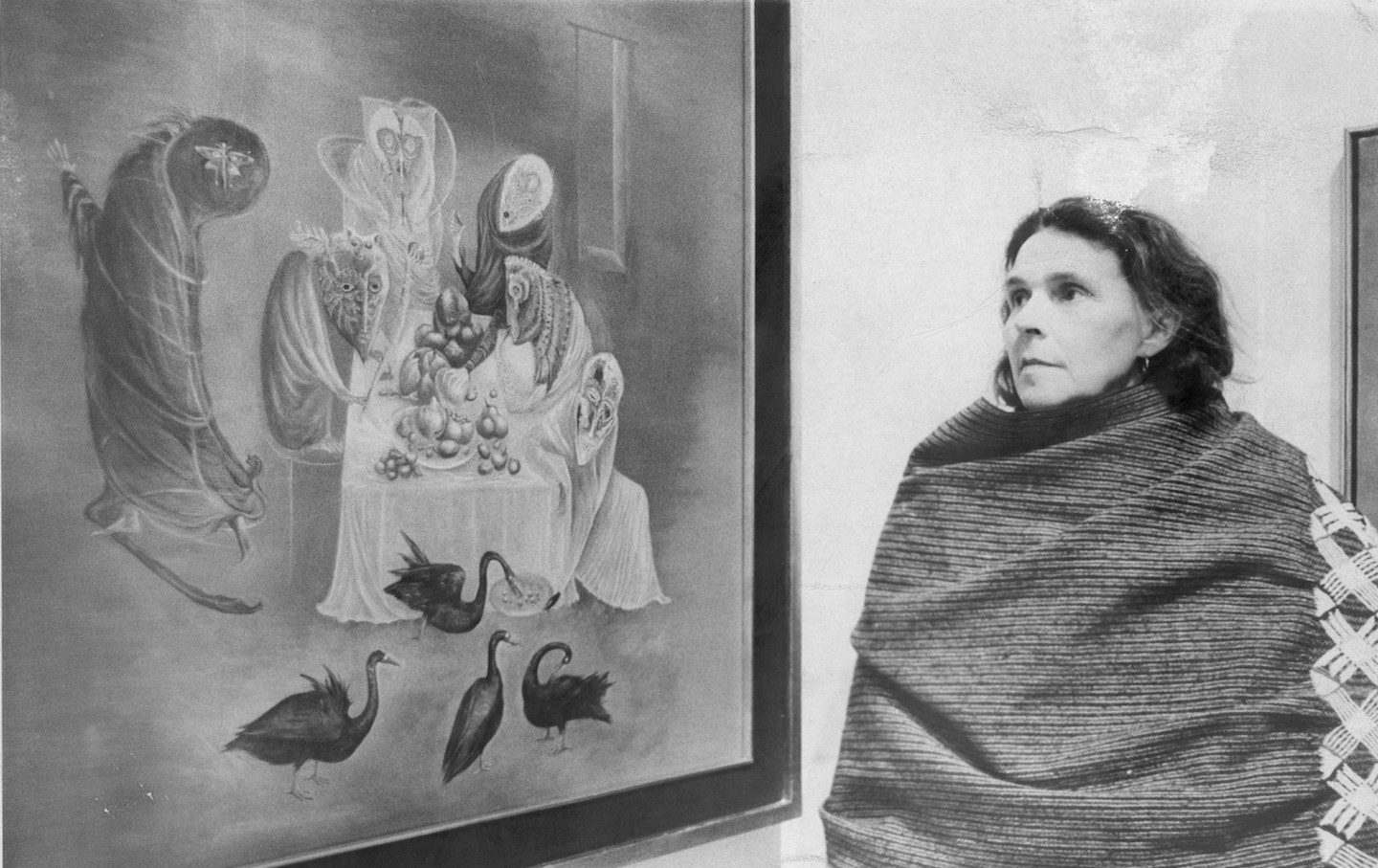 The life of the Surrealist painter and writer Leonora Carrington has, through time, shrunken into a myth. She was born in Lancashire, England, the daughter of a wealthy mill owner, and expelled from two Roman Catholic boarding schools as a child. In 1935, she was presented as a debutante at Buckingham Palace and, two years later, she met the Surrealist painter Max Ernst in London, and ran away with him to Paris. After the outbreak of the Second World War, Ernst was arrested by the French gendarmerie and imprisoned; Carrington fled to Spain, had a mental breakdown, and was sent to an asylum. She then escaped to America and embedded with Surrealist expats in New York, where, among other things, she took a shower fully clothed in the presence of Luis Buñuel and covered her feet with mustard in front of André Breton. She moved to Mexico City in 1942 and lived there for over half a century—dying in 2011 at the age of 94.

Plotted this way, the typical sketch of Carrington’s biography tends to service two rather emaciated themes: rebellion and mental illness. The trouble is that neither says much about her life or work.

Carrington’s paintings and short stories are set in forests and lunar dreamscapes, filled with robed animals and witches and horned creatures, and various kinds of magical soups and stews. There is a relentless love of animals and cooking, an attention to fables and mythology, a wily sense of humor. And yet people in her orbit, from teachers to friends and critics, read a kind of aggressively crafted deviance into her strangeness. When she was at boarding school as a child, Carrington told her biographer, Joanna Moorehead, she went down to breakfast one morning with mismatched shoes. “‘There you are again, Leonora Carrington,’ said one of the nuns. ‘Always desperate to be different.’ But the nun was wrong; Leonora had not worn the wrong shoes deliberately…”

Later in New York, after Carrington met Peggy Guggenheim, who supported her work (and eventually married Ernst), Guggenheim recalled: “She had enormous, mad, dark eyes with thick black brows and a tip-tilted nose. Her figure was lovely but she always dressed very badly, on purpose.” The Russian writer Victor Serge wrote in his notebook, after meeting Carrington in Mexico: “She has a fine, very long face with a square forehead, pale and symmetrical, a slightly snub nose, dark, intensely burning eyes, full of assurance and disquiet—manifestly schizophrenic.” In Guggenheim’s account, Carrington dresses poorly on purpose; in Serge’s, her eyes are evidence of psychosis. As so often would be true for Carrington, her silence was a screen onto which people projected her intentions as much as their own insecurities.

The Hearing Trumpet, Carrington’s only novel, is the story of 92-year-old Marian Leatherby, who is gifted a hearing trumpet in the book’s opening scene, “encrusted with silver and mother o’pearl motives and grandly curved like a buffalo’s horn.” Marian tells us that she’s toothless, vegetarian, and has a small gray beard, which she’s rather pleased with, and that she is self-sufficient and keeps clean. While hiding in a passageway in her house, she raises the hearing trumpet to her ear and learns that her family is planning to send her off to an institution for old senile women. “Grandmother,” says her grandson Robert, “can hardly be classified as a human being. She’s a drooling sack of decomposing flesh.” Marian’s first concern, characteristically, is not herself but her two cats, Marmeen and Tchatcha.

The “home” to which Marian is sent, Lightsome Hall, is run by a representative of the Well of Light Brotherhood, which has a residential philosophy of manual labor and self-observation that recalls the mystic G.I. Gurdjieff’s Institute for Harmonious Development. A medieval castle complex filled with dwellings that look like toadstools, chalets, bungalows, and footwear, Lightsome Hall is overseen by a man named Dr. Gambit and his wife, Mrs. Gambit, and staffed by three servants, who attend to nine geriatric women of remarkable age, one of whom claims to be 184 years old. Upon learning this, Marian expresses a healthy dose of skepticism: “This hardly seemed probable but I didn’t like to contradict her.”

What happens in the rest of the book is not possible to summarize faithfully. A linear sample might include Marian’s investigation of an old painting of a winking nun; a text within a text, inserted in the middle of the book, about the life of this nun (as translated from Latin by a friar); the death of a resident at Lightsome Hall involving a deadly batch of fudge and an ensuing hunger strike; a global earthquake and the emergence of a New Ice Age; Marian’s descent into the depths of hell, or “The Womb of the World,” and an encounter with another version of herself, who is there in hell making a stew. “Jump into the broth, meat is scarce this season,” the other-her tells her. Marian leaps in and is suddenly on the outside of the cauldron, as the other-her, looking down:

I could see my own meat, feet up, boiling away as merrily as any joint of beef. I added a pinch of salt and some peppercorns then ladled out a measure into my granite dish. The soup was not as good as a bouillabaisse but it was a good ordinary stew, very adequate for the cold weather.

The whole world, along with Lightsome Hall, is flattened by the earthquake and ice age, so Marian and her elderly comrades shelter in a cavern and dance around a fire to the beat of a tom-tom to keep warm, subsisting mostly on mushrooms. They learn from a traveling postman that their help is needed to find the Holy Grail and return it to the Goddess, or Great Mother, who is the planet’s last hope for survival. With the help of a swarm of bees and a pack of wolves, Marian and company retrieve the Holy Grail, opening the way for a future of “love and goodwill,” where the world is “peopled with cats, werewolves, bees, and goats.” The End.

Carrington’s novel is not even 200 pages, and this is only a sliver of its plot. But on one level, it could be described as a story about the female salvation of humanity and nature from the destruction of modern men. There are passing references to recent history—the atom bomb, the sustained international bloodshed of 20th century warfare—and Marian’s closest friend, Carmella (loosely based on Carrington’s friend the Spanish painter Remedios Varo), points to the “sickly collection of gentlemen that call themselves ‘Government.’” “Men are very difficult to understand,” Carmella says, as the ice age sets in. “Let’s hope they all freeze to death.”

The Hearing Trumpet draws indirectly on many sources, from Arthurian legend and classical and Celtic mythology to the rhymes and riddles of Lewis Carroll (which Carrington liked to memorize), but above all is Robert Graves’s The White Goddess (1948), which Carrington identified as one of the most significant books she ever read. Graves argued (loosely) that in prehistoric times, matriarchal societies that worshipped a supreme goddess were overthrown by men, who elevated the goddess’s male consorts to the role of supreme deity and then constructed myths and rites to cover up the deed. Carrington’s novel, then, is a kind of countermyth—and wish fulfillment—that wrests society, religion, and nature from men and restores power to women.

But to read The Hearing Trumpet exclusively as allegory would ignore the deeply funny, deadpan, and epicurean sensibility that makes Carrington’s novel, as well her short stories, so distinctive. There are characters here, nearly a century old, who are scrambling up and down ladders and stairs, plotting to dig tunnels, and industriously saving cat fur in jam jars to knit themselves a jumper. And there are foodstuffs, elixirs, and little things that pile up in the pages: violet-scented lozenges, lorgnettes, sea shells, colored beads, port wine, small black cigars, jujubes, sweetmeats, bibelots, and jeweled antelope skin. Even though the prose is staid, it’s lush with words that appeal to the senses. What’s playful and irreverent in her style is not so much clever turns of phrase but swerving metaphors and non sequitur. Marian says of her son, “He stood mouthing at me, looking as if I had picked a live goat out of my bonnet.”

The Hearing Trumpet is perhaps not a “good” novel in some conventional sense—coherent, well-crafted, eminently readable, full of three-dimensional characters, and so on—but it doesn’t aspire to be one. There is a deep vein of undisguised autobiography running through the story—the scenes of Marian’s descent into the underworld align closely with Carrington’s memoir, Down Below, including a moment when Marian recalls that, as a young woman, she wanted to leave London and “study in Paris where the Surrealists were in full cry”—but Carrington does not try to sculpt the bare facts of life into something layered or necessarily literary. There is the sense of a wry and rangy mind exploring and enjoying itself. “I wanted to appear like a nice old lady so that I could poke fun at sinister things,” Carrington once said in an interview.

But the novel also doesn’t seem like an “automatic” work of Surrealist fiction, where thoughts are chucked out of the unconscious and onto the page without intervention. There is an attention to detail, a range of historical, mythical, and literary references, and a sense of restraint that give the book a much more controlled feeling than the mental gush of, say, Nadja (1928), the arch-Surrealist novel by André Breton. Like the other labels applied to Carrington and her work, “Surrealism” is a term—from an aggressively masculinist movement—that limits the unique and undogmatic program of her art.

One afternoon, while talking to Moorehead about the legacy of Surrealism and its most important and evolving document, the Surrealist Manifesto, Carrington asked to borrow her biographer’s notebook and then wrote inside of it a message in mirror writing. When Moorehead got home, she held the notebook up to a mirror and saw what Carrington had written: “I never read the Surrealist manifesto.”