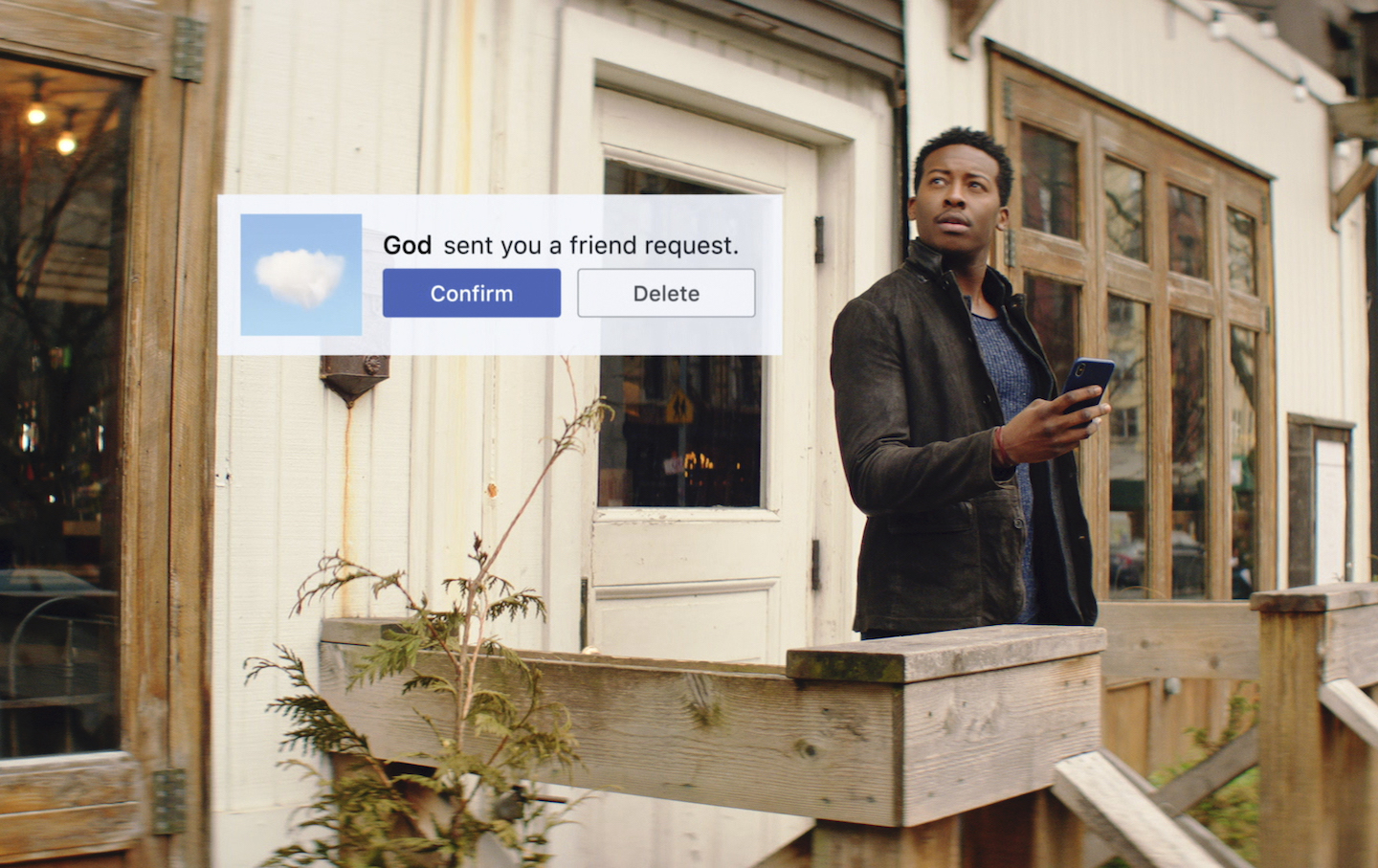 In his commentary on Paul’s Epistle to the Romans, Swiss theologian Karl Barth wrote that “man cannot know God, for he is ever the unknown God.” God Friended Me would disagree. Watch a handful of episodes of the CBS comedy-drama, and you can sketch God’s personality in broad strokes: God likes Fibonacci, the song “That’s Amore,” AI-generated art, mixed martial arts, cops, causing drama at family gatherings, and The Maltese Falcon. If you have a secret child (as many characters in the show do), God thinks that you absolutely should seek him or her out for a reconciliation, no matter the circumstances. God is all right with monarchy (as long as rulers advocate for incremental, progressive change) and thinks it’s an acceptable payoff to hack into personal medical records if the aim is to prevent a divorce. God is not quite ready to support legalizing recreational marijuana and thinks you shouldn’t run from a bench warrant. God hates it when teens run scams on Facebook.

God Friended Me follows the path of podcaster Miles Finer (Brandon Micheal Hall). He’s the millennial atheist son of a family of Episcopalians, and his podcast is devoted to his religious skepticism. But one day he receives a mysterious friend request from a Facebook account calling itself God. Miles begins receiving strangers’ profiles from the account as friend suggestions, which he disregards as a hoax until he encounters the people in public, usually finding them in some state of extreme distress. Over the course of the first season, Miles gradually accepts his role as the God account’s prophet. He enlists the help of his friends Cara (Violett Beane) and Rakesh (Suraj Sharma) to follow its social media bread crumbs and intervene in the lives of people who need help. Soon, Miles scraps the God-is-dead discussion on his podcast and instead tells inspirational stories about the account’s good deeds.

The God account’s interventions during the recent second and final season include getting a veteran back together with his girlfriend, raising money via GoFundMe for a child’s kidney transplant not covered by health insurance, persuading a precocious teen not to hack into classified Department of Defense files, and ensuring that the vaguely feminist princess of a made-up Central African nation named Longo will ascend to the throne instead of her scheming, conservative brother. (The God account also, controversially, nabs Cara’s stepfather for insider trading.) Each episode functions as a brief morality play for a peculiar moral worldview. It’s not quite Christian, although most of the show’s religious characters are Christians. The God of God Friended Me is not recognizable from any of the world’s major religions but appears instead to be profane in origin.

God Friended Me works out these ethical dilemmas by something we can call network TV moral theory: In each episode, a character faces a common, difficult decision—how to heal broken trust in a family, how to recover from serious material loss—in circumstances written to make those decisions much easier than in the real world. This worldview also fixates on individuals: The account is run by an entity with vastly more information and power than any of the characters on the show, which the entity uses not for mankind’s salvation or cosmic justice but to improve the lives of a handful of people without making drastic changes to the structures that caused them strife in the first place. Miles and his friends search high and low for the entity behind the God account, but they’ll never find them, because the God of God Friended Me is the CBS Entertainment Group and the network comedy-drama format in general.

God Friended Me is executive produced by Greg Berlanti, a prolific television producer who recently signed a $300 million deal with Warner Bros. Television Group, a division of WarnerMedia. He currently holds the record for producing the most live-action scripted TV shows airing in the same year: 18, including the CW series Riverdale, Supergirl, and Arrow. The show’s other executive producers include cocreators Bryan Wynbrandt and Steven Lilien, longtime friends who frequently debate religious questions. (Both were raised in Jewish households. Lilien is still religious, and Wynbrandt is agnostic.) The idea for the show sprang fully formed from Wynbrandt’s mind in 2011, when he saw a Facebook notification on his phone while driving to meet Lilien. “I just thought to myself, ‘What if God or something calling themselves God started sending you friend suggestions?’” he recalled in an interview with Religion News Service.

As the idea developed, Lilien and Wynbrandt began to see social media and religion as analogues. Wynbrandt said they were fascinated by “the idea that, like religion…[social media] is supposed to be a positive [place]. It’s something hopeful, something that’s supposed to bring people together, but it’s perverted by humanity in a lot of ways. You see it being used to divide us.”

Are the problems with social media similar to the problems with religion, as Wynbrandt suggests? Depending on your beliefs, religion was created either by a higher power or by generations of people searching for answers to existential questions. Social media was invented in the last three decades to turn a profit from a to-be-determined revenue source that turned out to be surveilling users and selling their data. God Friended Me positions itself as a show about how we live now, but it is more accurately a show that communicates what Berlanti, Lilien, and Wynbrandt apparently believe the corporations that make TV believe the largest swath of viewers believe about how they live now. A feel-good comedy-drama in which the weekly literal deus ex machina is God’s Facebook account speaks to viewers by allaying cultural anxieties about negativity on the Internet, the secularization of contemporary life, and whether the use of our data by large tech companies will prove harmful or benevolent. 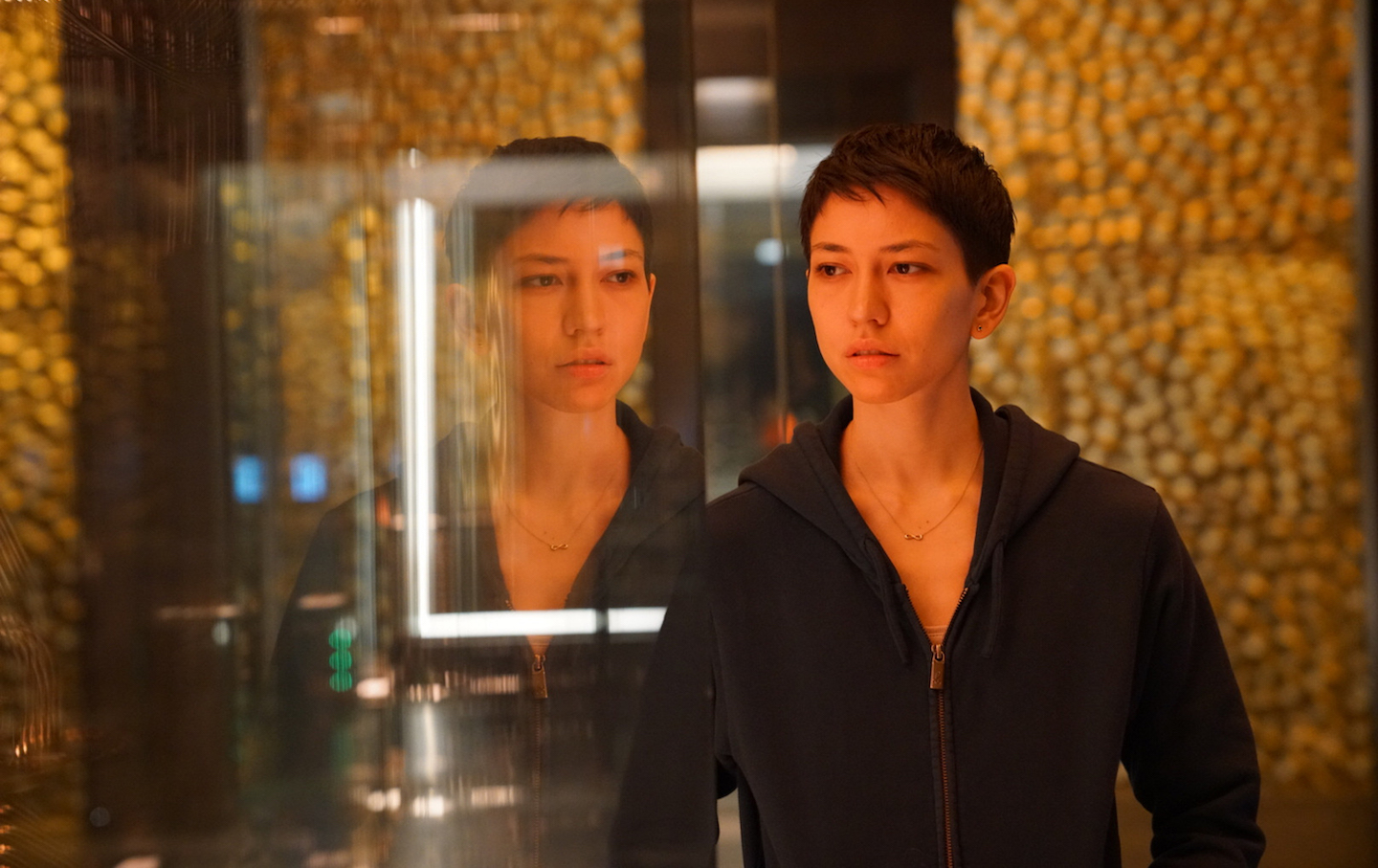 Between God and Science in the Surreal Silicon Valley of ‘Devs’

God Friended Me’s responses to these anxieties are optimistic and simple: God has a plan; others will use the exposure of our personal lives on social media to help us; and anger, unhappiness, and loss are often caused by miscommunication. In one episode, Miles’s friend suggestion is a young father named Russell who fails to show up in court for a grand larceny charge of stealing a car. When the crew finds him, he explains that he is running because he does not want his infant daughter to go into foster care, an inevitable result if he goes to prison. This is a brutal, common occurrence in the American criminal justice system, one without easy resolution and impossible to truly solve without structural change. But the show provides an easy fix: Russell did not steal the car; he was hired to move it by an acquaintance named Emmett, who is already in jail on unrelated charges. Miles persuades Emmett to admit to the crime, Russell is acquitted, and the show neatly sidesteps the question of whether people who steal cars deserve God’s personal help.

Although Facebook has made no official statement about it, God Friended Me could not have been made without the tech company’s permission to use its name and interface. This makes God Friended Me feel like a dialogue between a technology corporation and a media conglomerate; the holy text produced a dipartite god perversely fixated on telling feel-good stories and questioning the need for data privacy. As a network comedy-drama, it uses common traumas as setups for the catharsis of an improbable solution. As a show about technology, those solutions often involve accessing sensitive personal information online without permission.

In one episode, Miles’s Facebook friend suggestion from God is Julia, the daughter of the woman his father is about to marry. Miles discovers that Julia and her husband, Sam, are getting a divorce, and when Miles presses her, she tells him that the divorce is largely due to the couple’s inability to conceive. We cut to the following day in Rakesh’s office at a tech startup, where Miles, Rakesh, and Cara are brainstorming a solution to save the marriage, which they believe is the God account’s agenda. Rakesh has hacked into Julia’s insurance account and sees an unusual claim: an ob-gyn visit that included an ultrasound. Miles remembers that Julia avoided drinking champagne the night before, and when he and Cara confront her—“We didn’t mean to pry, really,” Cara says, erroneously, “but we know what you’re keeping from [Sam]”—Julia reluctantly confirms that they’re right, she is pregnant, but she doesn’t want her husband to know.

The episode’s plot becomes only more convoluted after that. The leap from the desire to help another person to accessing her medical records and then confronting her about a decision not to share reproductive information with a soon-to-be-ex-husband would be alarming in real life but is entirely normal in the universe of God Friended Me, a world in which invasions of privacy undertaken with good intentions are not only blameless but also charming and heartwarming.

In an interview with Wynbrandt and Lilien, journalist and religious blogger Kate O’Hare ponders the different implications if the God account’s origin is divine or human. (On the show, Miles tracks down a lead that the account is a stolen DARPA algorithm, which appears to be a red herring; the series finale heavily implies that it is, in fact, run by God.) “If the God account does not have a supernatural or alien origin, that means there’s someone on Earth who has the capability of doing what the God account does,” O’Hare says. “And while that’s cool, it’s also a little scary.” “Well, I mean, scary, yes, but they are [doing] very good things,” Wynbrandt replies. “So, the means to the end, I think, is justified.”