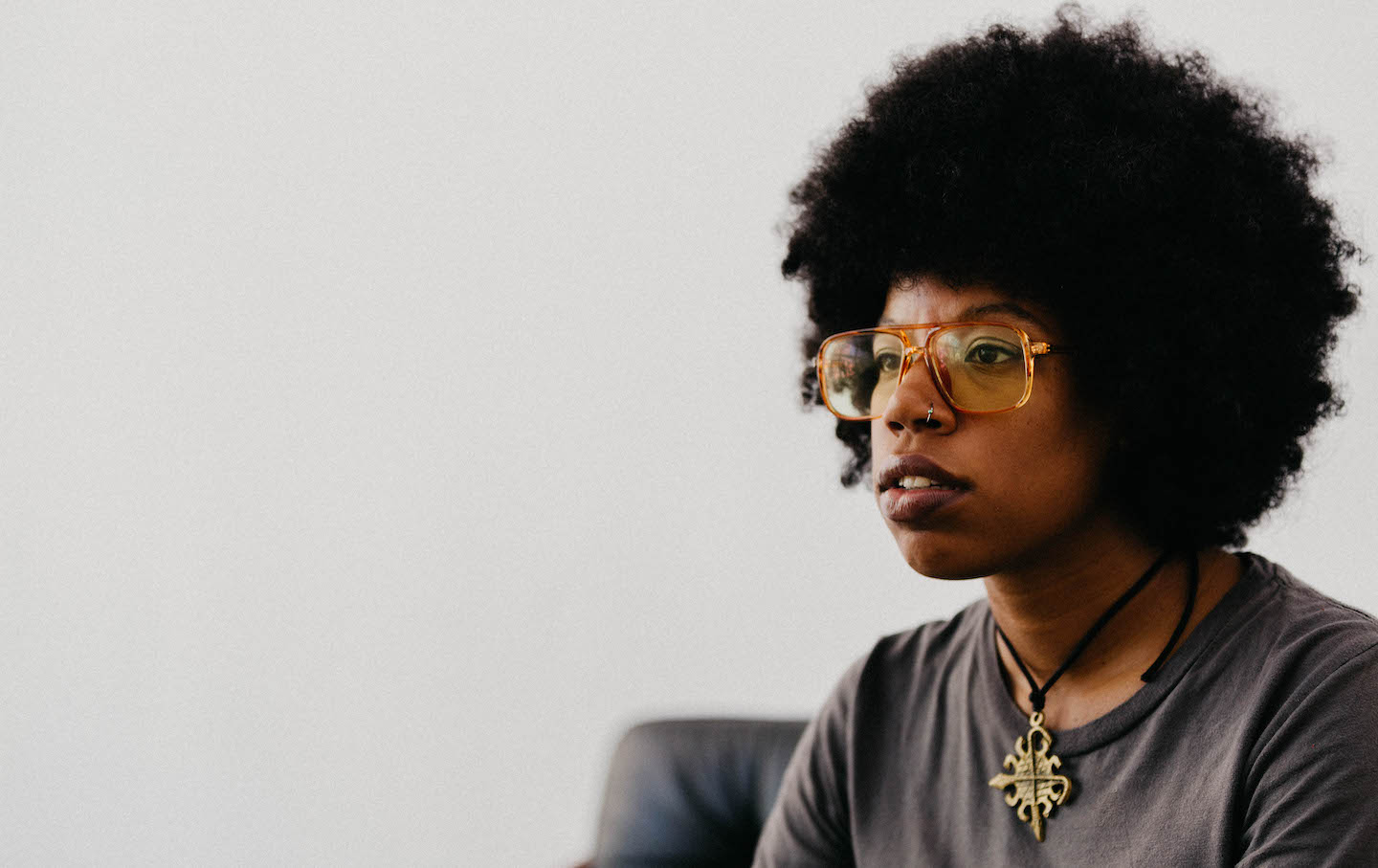 In mid-July, during a 48-minute Instagram Live interview with the Black culture and art website Afropunk, Georgia Anne Muldrow explained the meaning behind Mama, You Can Bet!, her third album under the pseudonym Jyoti. As she put it, single mothers forgo their own desires for the betterment of their children; the album was written to celebrate them. “I wanted to make a song for when a daughter sees their mother as a woman, for when the child respects a mother’s right to have passionate love in her life,” Muldrow said. “They say after a certain age, you’re not beautiful. They say that this woman, who’s given her whole body [and] done the holiest thing known to man, has now depreciated in value.” On the title track, which also opens the album, Muldrow speaks specifically to Black mothers. And with its distinctly West African sound—a woozy mix of goblet drums, upright bass, and quiet piano chords, produced by Muldrow in her home studio—it’s meant to empower a group of women who’ve been historically mistreated and disconnected from their ancestry. “There’s many a man who’d love your hand,” she sings. “Love is waiting for you.”

Muldrow has made a career of such empowerment. Long before being “woke” was trendy, she and Erykah Badu coined the term in the song “Master Teacher,” from Badu’s 2008 album New Amerykah Part One (4th World War), where they sang about finding utopia and themselves in times of madness. In the early 2000s, as a student at the New School in Manhattan, Muldrow and her friend and saxophonist Lakecia Benjamin talked about wokeness as a way to understand how they could contextualize their music within the political battles of their everyday lives. “Most of the conversation in our friendship was about putting our struggles in our music because that was all we could do,” Muldrow told Pitchfork in 2018. “[We spoke about] trying to find points of power: in your soloing, in your composing. Most of our conversations were about things situated around African liberation all over the world.” To that end, Muldrow, who had been releasing rap and soul music under her own name, has long encouraged Black people to fully embrace their heritage and fight systemic oppression. “We play nice while they stackin’ up kills,” she proclaimed on “Blam,” from her Grammy-nominated 2018 album, Overload. “How much we gotta grow, before we can learn to defend ourselves?” On “187,” from the collaborative Black Love & War, with the rapper Dudley Perkins, she declared, “Death to all oppressors.”

As Jyoti—a name given to her by family friend Alice Coltrane, which means “light” in Sanskrit—Muldrow creates a wistful blend of spiritual jazz indebted to the work of jazz greats. Through contemplative piano and organ solos, thick bass lines and electronic drums, she crafts a sound equally informed by the past and present, as if she’s trying to imagine how legends like the aforementioned Coltrane and Nina Simone would fit within the scope of modern-day jazz. It’s also decidedly West Coast; listening to it, one hears the lush Afrocentric influences of Los Angeles stalwarts Horace Tapscott and Charles Mingus.

There’s a certain ease to Muldrow’s Jyoti work; she borrows and riffs on the textures of Coltrane, Tapscott, and Mingus in her jazz-centered arrangements with panache. Yet, while she pays homage to her influences, she doesn’t center them to the point of diminishing her own sound. Muldrow remixes two Mingus songs on Mama, You Can Bet! For “Bemoanable Lady Geemix,” she brightens his moody arrangement with big electronic drums and darting synths, turning the down tempo original into a glossy hypnotic thump. On “Fabus Foo Geemix,” she quickens the original with an upbeat drum loop and electric bass, turning an old Mingus cut into a funk-infused breakbeat. Equally spacious, scenic, and forward-looking, they both use traditional jazz as the basis for something remarkably new and vibrant.

Born in Los Angeles to a musical family, Muldrow’s current creative direction is rooted in her biography. Her father, Ronald, was an acclaimed funk and jazz guitarist known for his work alongside the saxophonist Eddie Harris. Her mother, Rickie Byars-Beckwith, is an experimental vocalist who specializes in New Thought music and used to sing with the jazz musicians Pharoah Sanders and Roland Hanna. Muldrow started composing her own music at the age of 10. In 2006, the LA-based Stones Throw Records released her first full-length album, Olesi: Fragments of an Earth, a dense collage of hip-hop, Black Liberation soul, and free jazz that foreshadowed Muldrow’s work as Jyoti.

Muldrow’s first two Jyoti albums, the free-jazz-focused Ocotea and the more straight-ahead Denderah, were released in 2010 and 2013, respectively, before the resurgence of interest in jazz that’s occurred in recent years. In 2015, amid a nationwide reckoning over police killings of Black people, the music of certain artists took on a darker, more political tone: Rappers like Kendrick Lamar and musical collaborators like the saxophonist Kamasi Washington responded to the moment with jazz-centered protest music that thrust the genre back into vogue. Muldrow predates Lamar and Washington, even though her Jyoti work was never appreciated to the same extent. “I don’t care how that shit happens, we need breakthroughs,” she once told me. “I’m very thankful that people are making jazz their own, and making it live in a unique way for them.” Still, she should be applauded for releasing such resonant jazz at a time when few were looking. Whether it’s bringing the term “woke” to public view or helping shape the current state of jazz, Muldrow’s work represents thinking ahead, waiting for people to catch up with her.

Mama, You Can Bet! is livelier than the previous Jyoti records, leapfrogging swing, ambient, and hip-hop through shorter instrumentals that don’t linger too long. Across the 15-song album, Muldrow doesn’t just nod to the past. On “Ancestral Duckets,” she summons her ancestors through meditative chants. On “This Walk,” in particular, she sounds weary yet resolute, lamenting state violence and how it takes a toll on mental health. Overall, Mama feels more like a beat tape resembling the instrumental projects she’s released under her own name. Where those albums display Muldrow’s love of electronic funk and West Coast hip-hop, the Jyoti work reaches back even further—to the late 1960s and early ’70s, when jazz musicians such as Miles Davis and Herbie Hancock broadened their sounds to include traces of funk and psych-rock. Jyoti celebrates the music of her youth while honoring the relatives and artists who’ve passed away. “Black improvised music is my foundation for life,” Muldrow told Afropunk’s Timmhotep Aku. “The Jyoti stuff is the root. It’s the square root of my sound.”

That explains “Ra’s Noise (Thukumbado),” a brassy cut featuring Benjamin, with its rhythmic scatting dedicated to the cosmic jazz pioneer Sun Ra. Its sauntering pace and vast arrangement is more restrained than Sun Ra’s sprawling compositions, but I can still hear parts of him in the track, from Benjamin’s shrill saxophone wails to Muldrow’s shouts of “interplanetary!” in the background. Sun Ra believed that Black people would never find peace on Earth and should live on other planets. “Ra’s Noise,” in turn, seems to score a voyage to deep space. “Orgone” similarly finds Muldrow longing for another place far from America’s systemic racism. “How I dream of living in Africa,” she sings over sparse piano chords. “I wanna go back, way back to the time when I was free.” Of course, a declaration like this isn’t surprising for her. She’s long sought this sort of liberation for herself and her people. Now that social unrest and police brutality have reached a feverish clip, Muldrow’s calls for Black freedom ring louder than ever.