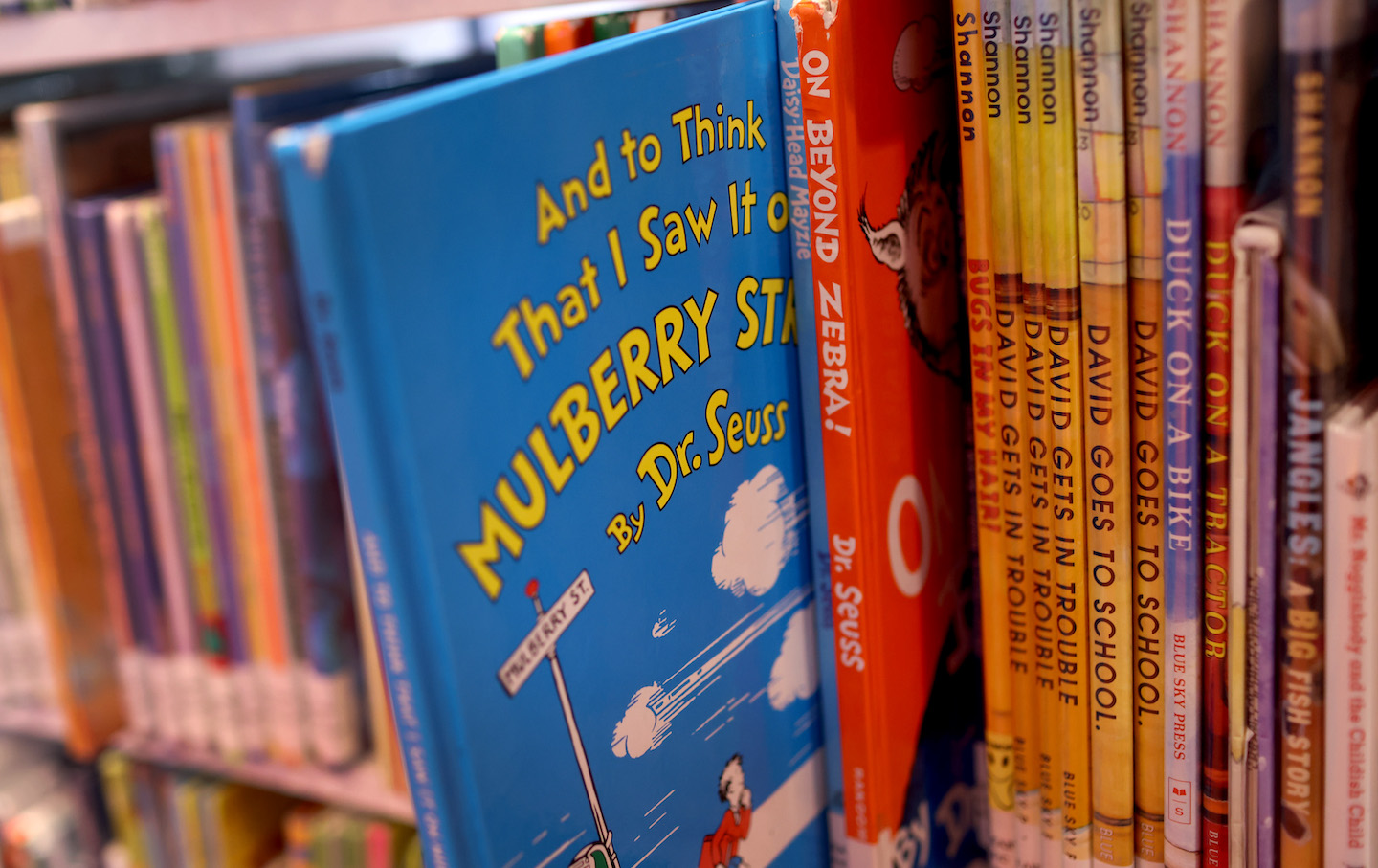 Books by Dr. Seuss, including And to Think That I Saw it on Mulberry Street, at the Chinatown Branch of the Chicago Public Library. (Scott Olson / Getty Images)

Never mind Dr. Seuss’s six discontinued books. For the record, And to Think That I Saw It on Mulberry Street is a work of considerable genius, despite the offending cartoon of a Chinese man eating rice, and McElligot’s Pool is pretty great too, despite its use of the outmoded word “Eskimo,” complete with clichéd depiction of an Inuit in fur-lined parka. How hard could it have been to replace the few offending pictures and words? Many other classic children’s books—Nancy Drew and the Hardy Boys, for example—have been quietly edited to remove racist content, and that’s good. However, as many have pointed out, the rights are owned by Dr. Seuss Enterprises, and if it doesn’t want to keep the books in print, that’s its privilege, just the way Amazon is within its rights to drop When Harry Became Sally and keep Mein Kampf. True, it’s a little odd to find progressives defending capitalist values, as if there were no considerations other than property rights where culture is concerned. It’s a bit too close to how Nelson Rockefeller felt about his right to destroy the socialist mural that Diego Rivera was in the midst of painting in Rockefeller Center. “After all,” E.B. White put it in a humorous poem at the time, “it’s my wall.”

If we really get serious about removing from the market, or dropping from the curriculum, or banning from polite society books of the past (choose your own words—just don’t say “canceling,” because cancel culture does not exist), there won’t be much left. Classic children’s literature is full of racial, ethnic, class, and gender stereotyping, and the outdated language that goes along with that. Some of that can’t be fixed with a few cuts. A friend who is reading her granddaughter The Secret Garden, one of her favorite books when she was in elementary school—and recently the subject of a movie adaptation—finds herself “cringing” at “racial elements and also class elements that are really awkward to explain to a 5-year-old.” And if the books are not problematic, the author may be. Roald Dahl not only fat-shamed an overweight child in Charlie and the Chocolate Factory and portrayed the Oompa Loompas as happy slaves, he was so anti-Semitic his family felt it needed to apologize 30 years after his death.

However, of all the racist, sexist, classist things children are exposed to, decades-old children’s books seem pretty low on the list. Consider our de facto segregated public schools and neighborhoods, our crumbling de facto segregated public housing, our shocking rates of child poverty, ill health, and low literacy, and the shocking violence of everyday life to which so many children are exposed. Given these serious—and growing—problems, it’s not whataboutism to wonder why these old books get so much attention. Is it because attacking old books is easier than making the social and economic changes that would improve the actual lives of real children and their parents? It doesn’t cost money to take a few volumes out of the classroom. But to provide schools with real libraries, with professional librarians and adequate budgets—let alone school nurses, counselors, art teachers, music teachers, and all the other things children need—will require billions we collectively decided some decades ago to spend on tax cuts for the rich, unnecessary war planes, and ourselves.

It took a pandemic to pass the American Rescue Plan, which allots billions for schools and libraries and direct payments to parents and is expected to reduce child poverty by 40 percent. When that money is gone, we’ll see if the ARP represents the beginning of a serious commitment to children, parents, and communities. Ten years from now, will we look back on the Dr. Seuss kerfuffle as part of a broad social transformation or as a symbolic protest against conditions that did not change all that much?

I too find Dr. Seuss imperfect. Beyond the racial caricatures, it irks me that the featured children are almost all boys, plus the occasional little sister like Sally in The Cat in the Hat. The one girl with a book named after her, Daisy-Head Mayzie, is an idiot. But this is where grown-ups come in. You’re not a cassette tape; you can comment and question and explain. I have no problem talking about the lack of girls when I read Dr. Seuss’s books (or anyone else’s) to children, any more than my parents, who were atheists, had problems giving me a book of Bible stories. Children are not passive recipients, either. Bible stories did not make me a believer. The only thing I remember from that book is that there was a kind widow who let Elijah stay with her when he came to town. I can still see that picture of his room—the striped blanket on the bed, the window open to the turquoise sky. What kids take from Dr. Seuss is his hilarious, inventive language and pictures, the permission he gives children to let their imaginations run wild.

My husband and I just finished reading D’Aulaires’ Book of Greek Myths to our 8-year-old granddaughter on FaceTime. The stories are somewhat sanitized—Aphrodite is not born from the castrated testicles of Uranus; instead we are told “nobody knew from where she had come.” But Cronus still eats his children, Pandora’s curiosity (like Eve’s) still brings destruction on humanity, and jealousy between goddesses still sparks the Trojan War, which is still fought over a woman’s fatal beauty. The myths contain deep truths, but they are not modern, democratic, progressive ones—on Olympus or off, not everyone is beautiful or wise or strong in their own way.

“The past is a foreign country,” in L.P. Hartley’s famous aphorism. “They do things differently there.” Let’s acknowledge that, and keep reading.