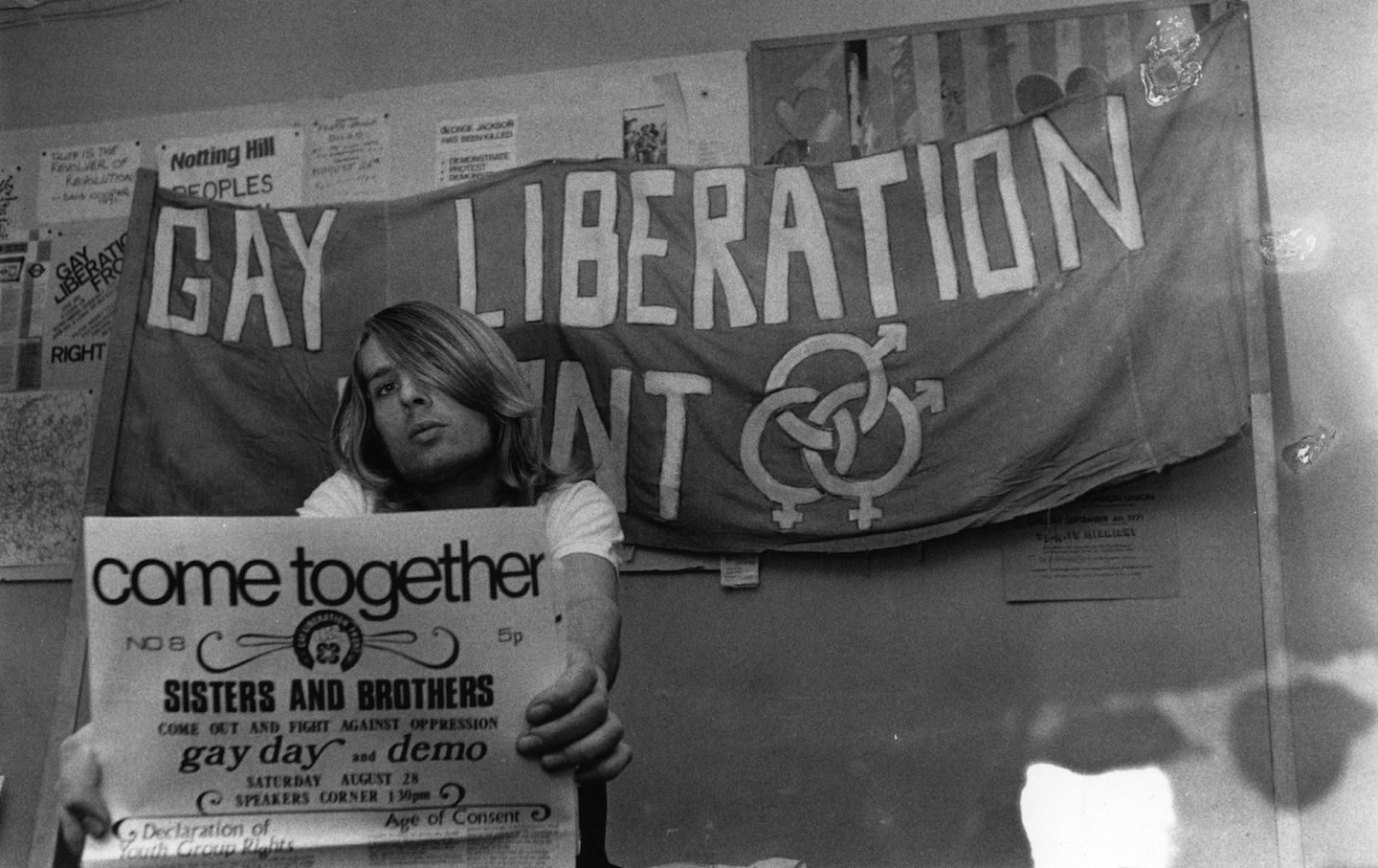 A member of the Gay Liberation Front holding a poster, 1971. (Photo by Evening Standard / Getty Images)

My last pre-pandemic outing to a Broadway show, in the fall of 2019, was to see Matthew Lopez’s play The Inheritance, a seven-hour spectacle that in its size and scope courted comparison to Angels in America. It was a polarizing play, one of those cultural events by which the queer men in my life felt either “seen” or misrepresented, so imposing was the show’s will to diagnose the particular pleasures and pathologies that constitute what might be called contemporary gay culture—at least as it exists among the dozen or so mostly white, New York City–based men who make up the play’s dramatis personae.

Let's Get Back to the Party

Ultimately The Inheritance, loosely adapted from E.M. Forster’s Howards End, was an exercise in anthropology as much as dramaturgy. At each intermission (six in all), we in the audience discussed its themes: sex, AIDs, friendship, literature, history, and traumas (individual and collective, fresh and inherited). The show was by turns thrilling and enervating, with aims so explicitly representational that the conversations in the audience took on a strange meta quality, much like the intergenerational back-and-forth among the show’s characters. Sitting to my right was a gay man of observable means who was gratified, he told me, that my generation would get the chance to vote for a gay president. He’d come straight to the theater, he added, from a fundraiser, which he himself had hosted, for then–Democratic primary candidate Pete Buttigieg.

I was reminded of the exchange while reading the debut novel Let’s Get Back to the Party, by author Zak Salih, which investigates the supposed ideological discord among contemporary gay men with a similarly broad sweep. Set shortly after the 2015 Supreme Court decision affirming the right of same-sex couples to marry and before the slaughter, the following year, of 49 people at a gay nightclub in Orlando, the book begins at a gay wedding, at which Sebastian, the first of our two narrators, arrives “dressed for a funeral.” There he’ll run into Oscar, the second narrator and Sebastian’s functional foil, for whom marriage equality is a kind of symbolic death, the arc of gay history bending inexorably toward assimilation. The pair are childhood friends, estranged by time, distance, and a clumsy tryst back in college; their chance encounter at the wedding sets the book’s dual narrative in motion. Throughout the work, the point of view alternates between the two of them, illuminating what Salih takes to be some kind of chasmic divide among today’s gay men.

Sebastian is not unlike the presumptive Buttigieg voter, a metonym for the domesticated millennial gay who is not on Grindr (referred to here as “Cruze”) and bristles at the word “faggot,” even when used by other gay men. At the wedding where he and Oscar meet, he is mourning a breakup, “heartbroken and struggling to see this day as a capstone to…all the months I spent canvassing for gay marriage outside suburban Metro stations and grocery stores.” He sets his sights on Oscar, who spends the wedding reception scrolling for a quickie with an anonymous thumbnail called “A.”

Oscar, too, is a pastiche, his politics loud but hollow. He longs, epidemic notwithstanding, for the halcyon days of bathhouses and casual fucking, “the grunt of release behind louvered doors,” bemoaning at every turn the siege of neighborhood gay bars at the hands of straight folks or the scourge of “Saint Obergefell.” So, inspired by the older gay novelist Sean Stokes, a sort of Edmund White figure whose frank depictions of illicit sex Oscar seeks to enact, he vows in a show of superficial resistance to “live by cock and cock alone.”

In one off-putting early scene, angered at the sight of an aerial marriage proposal on Poodle Beach, the gay vacation destination in Rehoboth, Delaware, he turns to a small child nearby and recites an especially lewd passage from one of these books. “I exploded into his mouth,” he reads to the kid. “He groaned in gratitude at my gift.” Later, hoping to disabuse a straight woman of the notion that “we’re just a bunch of harmless fags,” he harasses her at a gay bar. If Oscar’s grievances about the sanitization of gay culture are indeed valid—look no further than the NSA headquarters, limned in rainbow colors for Pride month—they’re often expressed in the form of bratty provocation.

At the book’s core is an immense and encumbering question of what it means to be a gay man today, now that the identifier is neither a death sentence nor a stamp of substantive rebellion. But here, as in The Inheritance, the question becomes its own kind of constraint. Both works, while vastly different in amplitude, possess emotional and historical heft only by association with tragedies not experienced by its central characters, namely the AIDs epidemic and, in Let’s Get Back to the Party, the Pulse shooting. On such terms, these events begin to feel like contrivances of plot; they must ennoble, provide perspective, as though queer history mattered only insofar as it embroiders the present, tells us how to be and who to vote for. It is harder, though, and perhaps premature, to address history that is fresher, less easily narrativized, such as the series of breakthroughs and regressions—marriage equality, a homophobic mass shooting, the election of Donald Trump, the emergence of the first openly gay presidential candidate—that characterize our present moment.

Salih’s book tries to do so by reading at times less like a novel than like a dialectic between Sebastian and Oscar, between the assimilationists and the liberationists. If there is a middle ground on this continuum, it is suggested almost exclusively by the novel’s supporting characters, two of whom exist as symbols, who help expose the tyranny of both narrators’ convictions. For Sebastian, a high school art history teacher, there is his student Arthur, in whom he sees not only the possibility of an out-and-proud adolescence, of which he was deprived, but also the fresh virginal face of the boy in Caravaggio’s The Musicians. Though Salih writes well about art, Sebastian’s frequent allusions to different paintings lay bare his psychology, a basic inability to treat the people in his life as anything more than extensions of thwarted desire. In “The Musicians,” he sees “Arthur Ayer, rendered in oils, staring at me from over the shoulders of a young man tuning a lute.” When he unceremoniously discovers that Arthur is on Cruze, certainly no crime for a horny high school senior, his projections are complicated. “No, I don’t think so,” he says upon learning the “A” with whom Oscar was flirting on the app is indeed his student. “He’s not the type.”

This moralistic perspective on casual sex, the idea that only a certain “type” of gay man might seek it out, reared its head before, earlier in the novel. In New York for an academic conference, “inspired by the anonymity of the city,” Sebastian downloads Cruze “just to see how the other half lived.” But if the historical differences between radicals and incrementalists were often genuine conflicts of race, class, and political ideology, here they are mere matters of sexual habit, a clash between the suits and the sluts. Where the book nods to the existence of other queer folk on this continuum—to people of color or trans people, to those living in countries less hospitable to non-normative sexuality—it does so in extremity, a kind of perfunctory checking of its narrators’ privilege that feels motivated less by the dictates of story and character than by those of representation. Sebastian, whose mother we’re told is of Arab descent, watches “a special [TV news] report on radical Islamic terror,” dwelling on images of state-sanctioned executions. “The plummeting body framed by sandstone columns, the perspectival rush,” he says. Here, what might’ve been an opportunity for the book to widen its aperture is instead eschewed. “What,” Sebastian merely asks, “would Arthur think of such a thing?”

Where Sebastian fixates on Arthur, Oscar turns to the aging novelist Sean Stokes, whose books function as a portal to an age of sexual libertinism Oscar spends much of the novel eulogizing, though he’s plenty promiscuous himself, having staked his gay bona fides on his libido. The past, for him, is something exalted, “a time where you could feel like you were living rebelliously,” he says, when being queer felt like “getting away with murder.” If Salih means to chide his characters’ simple-mindedness, too infrequently does the novel question the tidy dichotomy from which it derives its dramatic tension.

It takes two tragedies to complicate the dogma of either narrator, though at this point the pair can feel like personifications of a debate. The debate itself is one worth having, pivoting on the question of what is lost when a once-fringe community is enfranchised by the defiantly heteronormative institution of marriage. In The New York Review of Books, in 2014, Edmund White asked if “gays are in danger of covering,” sanitizing those qualities that have historically set us apart, “in order to obtain the permission to marry.” Whether this was worth it, White said, “I can’t decide,” which feels like the truest possible answer. In Let’s Get Back to the Party, the older novelist Sean Stokes decides late in the book to marry, telling Oscar, who feels betrayed by the gesture, that tying the knot “feels, perplexingly, like the queerest thing left in me to do.” While ancillary, Stokes is the most interesting character in the novel, precisely because he plays against type, confronting the futility of some perfect alignment of one’s identity, behavior, and politics.

The presence of such inconsistencies in everyone but our two narrators betrays the book’s fundamental question and, more important, reveals it to be a kind of red herring altogether, resting on the assumption of types and tribes that may indeed permeate apps like Cruze but are ultimately reductive, at least in fiction. All art, to some extent, manipulates history to its own ends. The characters in The Inheritance do so quite literally, enlisting the aid of E.M. Forster, who appears often as a sort of luminary spirit to help them narrate the story of their lives. But in both Lopez’s play and Salih’s book, queer history is deployed as affectation, willing the viewer to feel represented—as some might, by a gay president—or simply to feel.