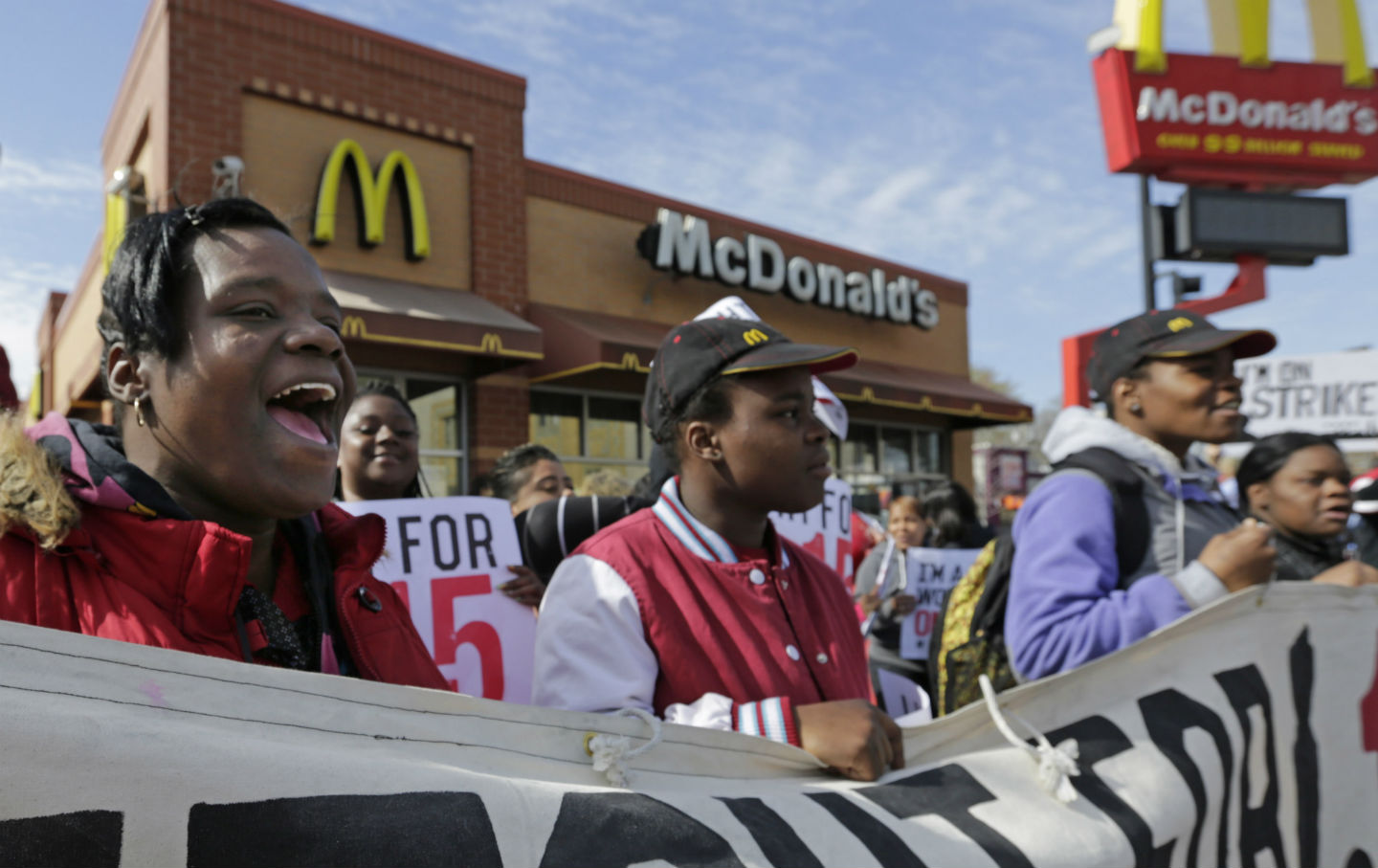 Workers and supporters rally outside a McDonald's in Chicago on April 15, 2015. (AP Photo / M. Spencer Green)

Trish Weaver remembers the first time she went on strike at her Walmart in Greensburg, Pennsylvania. She was struggling to build a career for herself in the automotive services department, but the poverty wages—starting at less than $8 an hour—had become unbearable.

The 22-year-old recalls feeling “nervous beyond belief” about that first Black Friday action in 2013, but she then realized management wouldn’t punish her for striking. Now with three strikes under her belt, Weaver headed to New York City this week to join thousands of low-wage workers who rallied under the banner of “Fight for 15.”

The slogan drew an estimated 60,000 protesters on Wednesday, with demonstrations in more than 230 cities and several countries. The movement has hit workplaces that span from the drive-thru to the university campus, penetrating sectors where labor unions have historically had little presence, and rejuvenating long established locals. The demand for a $15 an hour (a full-time annual income of about $31,000) and union representation began with a small mobilization of fast food workers in late 2012, and has since gone viral. Backed by financial and political support of the SEIU union, the drive for low-wage workers’ rights draws together populist anxiety over inequality and a wide spectrum of dynamic media-savvy grassroots movements, from #BlackLivesMatter to economic justice campaigns in Europe, Latin America and Asia.

The subtext of the Fight for 15 is a struggle for solidarity across industries, galvanizing unionized service-industry workers alongside adjunct professors who occupy the lowest rungs of the academic hierarchy. A rally on the Upper West Side of Manhattan on Wednesday displayed a solidarity that dissolved stereotypes about who earns low wages today. (According to a new analysis from the National Employment Law Project, “42 percent of US workers make less than $15 per hour.”)

Alan Trevithick, an adjunct professor who holds part-time positions at several New York college campuses, spoke before a mass gathering of laborers, security guards and hotel workers, about his struggle to cobble together multiple teaching gigs with virtually no benefits or job security. “That’s a shame,” he said. “It hurts adjunct faculty, it hurts all faculty, it hurts higher education, and…it hurts students most of all because we can’t give them the time and the attention they deserve, and they’re paying for it too.” He and other adjuncts translate the Fight for 15 into a fight for $15,000 per course for adjunct instructors.

SEIU’s home health aides—who, like home care workers across the country, are largely women and people of color—are also rallying for $15 an hour for their 150,000-strong workforce (which is only about half-unionized). Despite having a union contract with some benefits, like healthcare, workers typically earn poverty wages even after decades of arduous, round-the-clock service to elders and people with disabilities.

Urcelyn, a home health aide who works in Manhattan, down the street from the rally, says $15 an hour would be a big improvement on the $10 an hour she currently earns. (Many community activists are now proposing $15 as a new citywide hourly minimum wage to keep pace with the city’s soaring cost of living—another knock-on impact of the movement.)

“I’m going to school. I have to pay my school fee. I have to pay my rent, I have to take care of my family,” she says, “and $10 cannot do that.” Union members like her were aligning with fast food workers and other precarious laborers, she adds, because “We all have to work, and we do not get any of the sort of recognition that we need, and so we are here today for everybody.”

School crossing guards, who have clashed with the city over inequitable pay scales, rallied alongside other workers to demand fair schedules and decent wages. As essential support staff, the crossing guards say their earnings are eroded by inconsistent schedules that don’t secure full-time hours and benefits throughout the school day and summers.

“If we had seven or eight hours, a full-time job, that would really help us,” says Michelle Dunston, but under the current schedule, “They take up your whole day, but they only give you part-time money.”

But Eugene Allen says $15-an-hour is shamefully low. “We are fighting for these fast food workers because they demand respect…. $15 an hour is a disgrace,” says the Staten Island Ferry security officer and shop steward with the city’s building services union 32BJ. “This is America. This is the land of the free…. The bus fares went up. How can you afford to even get to work, at $15 an hour?”

But even $15 remains a long shot for the country’s most marginalized low-wage workers, in fast food and retail. True, Walmart plans to tick up its minimum wage to $9 and $10 by next year. McDonald’s announced that it would raise the base pay to about a dollar above minimum wage at the ten percent of restaurant branches that the company directly controls. (For their part, the employers insist that they’re primarily driven by business considerations, not public pressure, while the industry lobby downplays the protests as union-funded “PR stunts.”)

Yet those relatively tiny concessions have only seemed to sharpen the outrage surrounding the glaring inequality in the industry—particularly in light of the tremendous wealth disparities between rank-and-file workers and fast food CEOs and the Walton family moguls.

Activists are now diversifying and intensifying their fight. In addition to agitating in the streets with civil disobedience and ad-hoc strikes, fast food and retail workers are gaining momentum through legal challenges, with dozens of pending National Labor Relations Board claims charging McDonald’s with illegal anti-union suppression, along with litigation over wage theft, safety violations and racial and sex discrimination. Critics have similarly assailed Walmart’s civil rights track record, with charges ranging from workplace discrimination against pregnant workers to exploitation of immigrant workers in its seafood supply chain.

Weaver rejects the notion that workers dissatisfied with the conditions at Walmart ought to just seek a “better” job. She sticks to Walmart out of both necessity and principle: “Why should I not be comfortable in my [workplace]?” she says. “Why should I have to go to another job?”

As an organizer, she has a simple pitch to persuade coworkers to protest with her: “If you join, you’re going to make this company better…. Doing these actions, having a voice, speaking up for what is right—we’re not allowing these corporations to control [the] associates…. If it wasn’t for us, we would still be making minimum wage, we would not be making the $9. And we’re not going to stop there. I mean, come on, we got this far. We’re going to continue fighting till we get to $15 and full time.”

Walmart’s $9 wage offer was far too low, but just high enough to spur workers to ramp up their demands—there’s way more to gain than to lose.