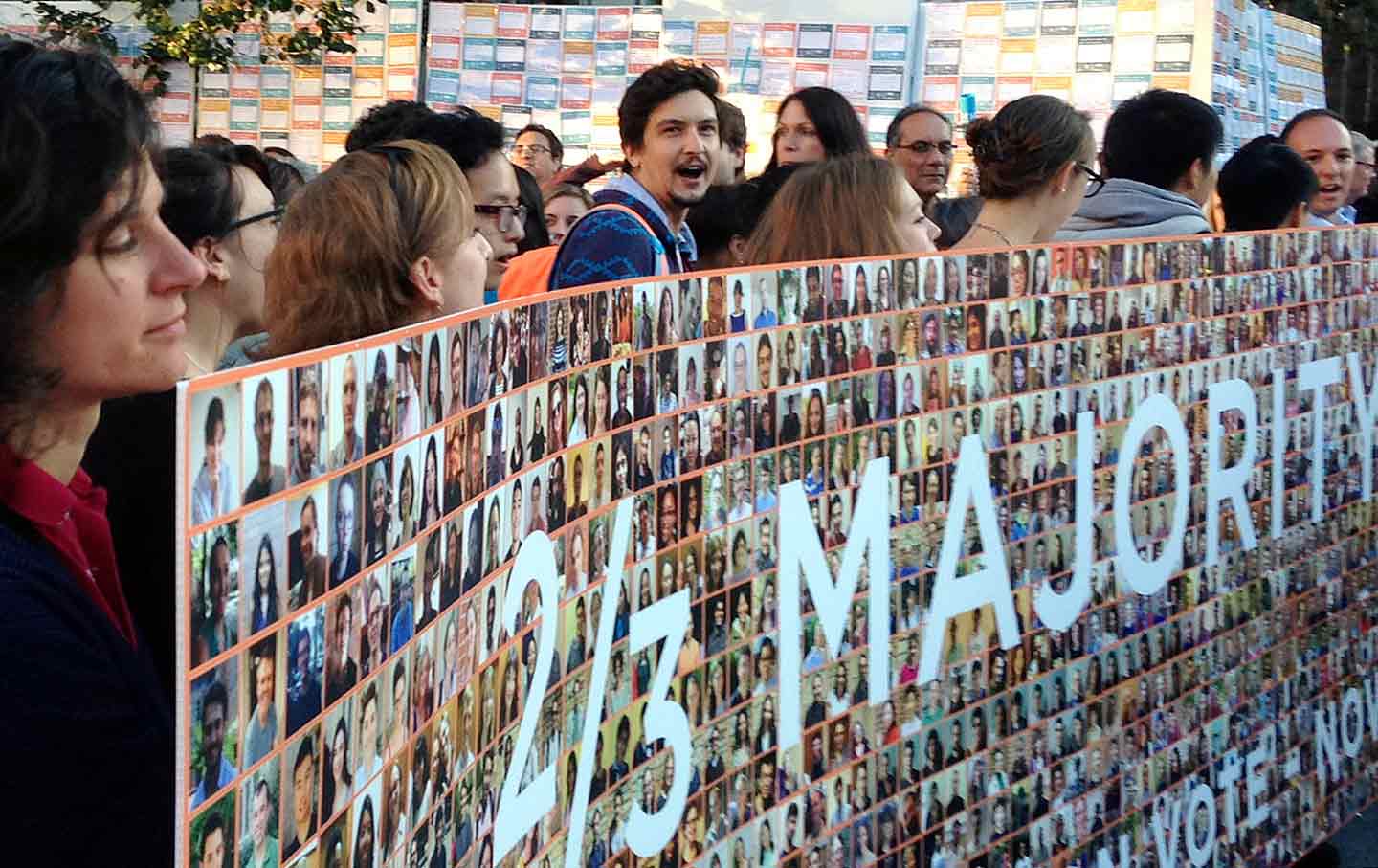 Members of the Graduate Employees and Students Organization deliver a petition bearing the names and faces of hundreds of Yale University graduate student employees during a protest on campus in New Haven, Connecticut. (Ryan Flynn / New Haven Register via AP)

Yale’s epic labor battle between graduate student employees and the administration has cycled through a generation of graduating classes and many doctoral candidacies, and graduate student organizers have finally officially named their union Local 33. A jubilant chartering convention last week in New Haven certified that an overwhelming majority of the proposed unit have signed cards signifying support for unionization. The move puts an official seal (blessed by a number of state officials and the union leadership) on the more than 1,000 signatures the group gathered for a petition demanding a fair union election last year.

Graduate Employees and Students Organization (GESO) chair Aaron Greenberg said that the formal naming of Local 33 shows it is ready to unionize with or without an official nod from the administration, and hope to spur the debate forward by taking the initiative, symbolic though it may be:

“We are not going to wait for Yale to give us an election to act like and be the union that we are,” he tells The Nation. “And I think a lot of the issues that we are fighting about, whether it’s access to childcare, adequate mental healthcare, race and gender equity, security of pay. These are issues that are not going to wait for us to have a union. These are really pressing for our members. And we’re ready to fight on them.”

The chartering of the local doesn’t seem to have changed the administration’s position. However, a spokesperson for Yale says via email that it would respect the traditional secret ballot process, overseen by the National Labor Relations Board, and “officially branding GESO as Local 33 is not perceived at Yale as anything new or different, and it has no effect on the status of graduate students.”

As a legal matter, GESO’s institutional power and legal status remains tenuous without any official recognition of the union from the university. Under the precedent of “Brown II,” the NLRB has suppressed graduate labor organizing with a blanket denial of collective bargaining rights at private higher education institutions. The 2004 ruling thus left union recognition at the employer’s discretion, handing the mega-corporations that run Yale and other campuses wide latitude to ignore the growing clamor for union representation among graduate assistants and researchers.

But soon Yale (where the author was once an undergraduate) may have no choice but to come to the bargaining table with Local 33, because, as we reported last year, the graduate worker unions at Columbia University and the New School have taken their demand for a union to the NLRB in Washington to secure their union rights and overturn Brown. They’re backed by many labor unions and other graduate workers—including those at public universities, where unionization is governed under separate state labor laws, and the new UAW graduate workers union at New York University.

Over the past decade, one could say the NLRB stranglehold has worked exactly as the victors intended: On the neoliberal campus, working conditions have grown more precarious, and higher education in general has oriented toward the reproduction of corporate power rather than genuine free inquiry. Educational borrowing has soared, with typical 2014 debt loads for graduate-level students ballooning to about $57,600, the bulk of it from graduate programs. As for paying off that debt through an academic career, decent-paying, tenure-track positions are perilously scarce, while the destabilization of the workforce shunts former teaching assistants into an expanding underclass of underpaid adjuncts. All these stressors are compounded by competitive and alienating campus climates that often offer inadequate mental health and social supports.

University administrators argue that collective bargaining, and the adversarial labor-management relationship, would undermine conventional scholarly pedagogical relationships. Yale (though GESO is not participating directly in the NLRB case) similarly contends that graduates don’t need a union, since they are already compensated generously and can address labor-related issues through administrative channels.

Graduate student labor advocates, however, say this romanticized logic ignores real power relationships in the graduate workforce. In its recent reply brief, the Columbia Graduate Workers union argues, “the supporters of Brown represent the viewpoint of executives and administrators who…have seized upon imagined threats to academic freedom and to mentoring relationships to deny bargaining rights to their employees.” Meanwhile, the growing tendency for under-resourced departments to exploit graduates, coupled with inadequate labor protections, in turn constrain and distort their relationship to the surrounding academic community. After all, it’s difficult to immerse yourself in the inspired practice of intellectual apprenticeship when working a night-shift restaurant job, teaching undergraduate courses on an erratic schedule, and researching your thesis, while living off food stamps under a lifetime of debt.

Yale’s GESO has presented a multipronged agenda focused on both academic and labor issues. While demanding more equitable compensation and secure fellowship funding, graduates have also criticized gaps in mental health services, which they say are fraught with “long wait times and inadequate options for treatment” for the estimated half of graduate students who seek help. They’re also calling for affordable childcare, noting that “current on-campus daycares charge fees that amount to two-thirds of a graduate researcher’s pay.” GESO is also campaigning around issues of gender and racial diversity in hiring.

About a quarter-century after Yale graduate students kick-started the incipient labor group, TA Solidarity, campus organizing has blossomed in many forms across campuses nationwide, including unionization drives for non-tenure-track faculty (who currently make up the majority of the academic workforce) at public and private institutions, from large state schools to underfunded historically black colleges. Undergraduates are rallying with the Fight for 15 for campus workers, both students and locals. And with national campaigns like the SEIU-backed Faculty Forward, an emergent coalition of faculty, students and staff are sparking critical conversations on how academic labor fits in the “new economy,” and how to resist the corporatization of higher education, in theory—by protecting their right to free inquiry—and in practice—by ensuring their rights at work are respected.

So the graduate workers now going before the NLRB are inking one footnote in a new chapter of educational activism—not just disrupting the ivory tower, but reclaiming their campus.