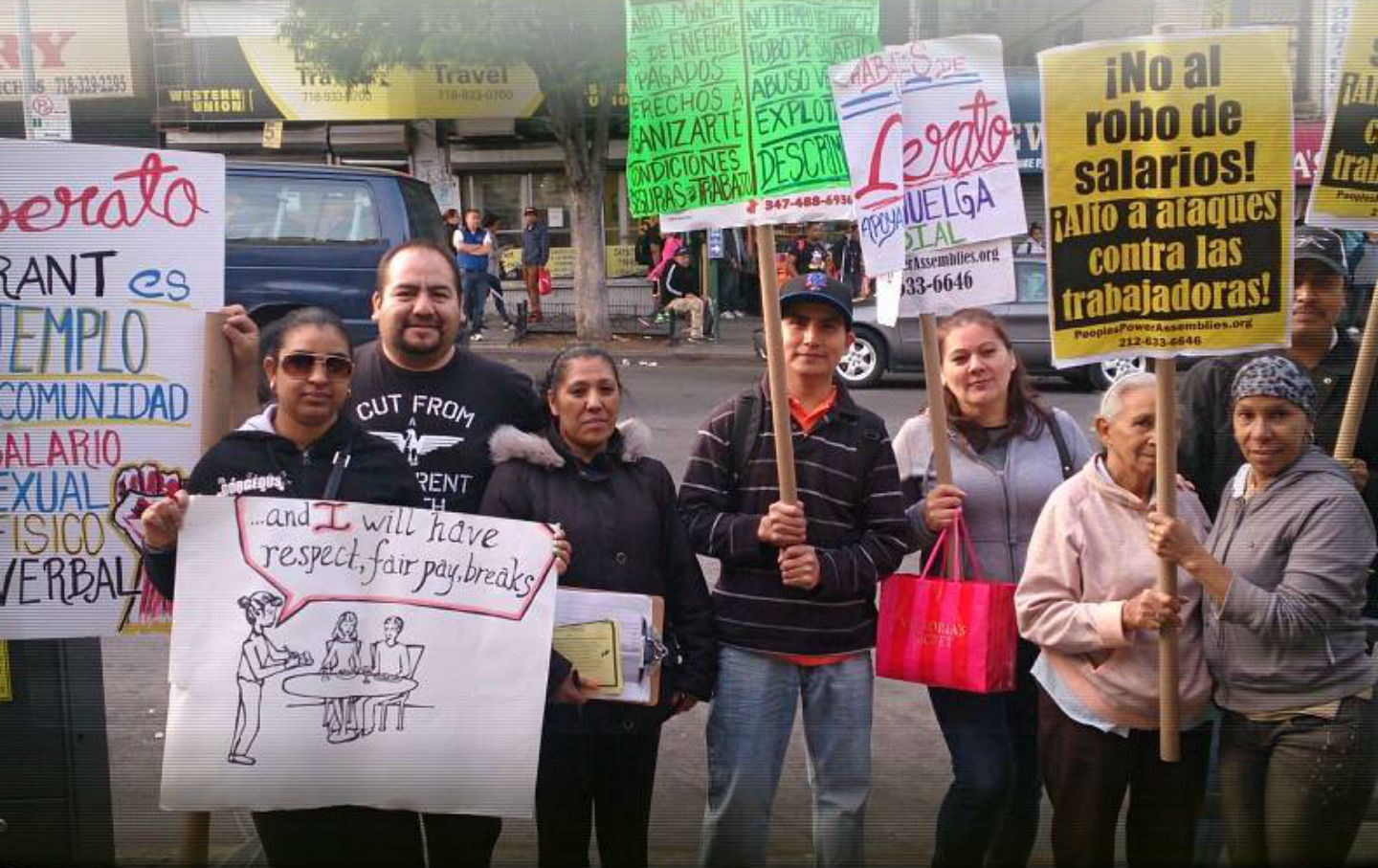 Protestors denounce conditions at the Liberato, a restaurant in the Bronx. (Photo courtesy of the Laundry Workers Center United)

Until recently, the Laundry Workers Center United’s claim to fame was a rabble-rousing protest encampment on Times Square, a self-fashioned “Worker Justice Café” erected by workers as part of a unionization campaign at a Hot and Crusty bakery. Back in 2012, their foolishly brave, Occupy-inspired tactics proved successful in challenging their employer’s power. Now the LWC is facing its own challenge in court, accused of illegally “conspiring” to protest against a boss.

According to a complaint brought by the LWC’s latest campaign target, the Liberato restaurant in the Bronx, the LWC isn’t a humble worker center, agitating on behalf of low-wage immigrant workers, but a racketeering enterprise, waging class warfare against a local business.

The allegations of gangsterism stem from a basic labor dispute: a group of current and former workers have partnered with the LWC to campaign against the restaurant over alleged labor violations and mistreatment. After the conflict escalated and the LWC took legal action last year—with a class action lawsuit and National Labor Relations Board (NLRB) complaint now pending—the restaurant responded with a classic New York tactic: the countersuit. Liberato has variously charged the LWC with slander and harassment, as well as violating the Racketeer Influenced and Corrupt Organizations Act (RICO). This federal law, a curious hybrid of reactionary politics and organized-crime fighting, has historically been used to nab both mob bosses and union organizers. The suit seems to follow a rich tradition of corporations seeking to criminalize collective action as labor’s “extortion” of capital.

Maggie Andres Crecenio, a server at Liberato, sees her boss as the real racket. She claims that she and her coworkers have been repeatedly shorted on wages and cheated out of overtime hours, as the restaurant flagrantly violated minimum wage and overtime standards. A worker might be paid little as $210 for a fifty-four-hour work week, they say, and some were subjected to intimidation and sexual harassment, and subsequently punished for protesting.

When Crecenio complained, the boss reportedly retaliated by “disciplining” her, giving her a position with a heavier workload. Aside from an end to the abuse, she says, workers demand basic provisions such as adequate heating in the winters, a punch clock to properly count their hours, and a good first-aid kit, so kitchen workers don’t have to use potato skins to salve their cuts.

“I’ve been working for the company almost six years,” Crecenio says, “and I know how long and how [hard] we’ve been suffering…. we want the company to treat us like a person, not like an animal.”

The complaint describes in colorful detail the alleged injustices the owners suffered: starting last spring, organizers allegedly engaged in “conspiracy” and “threatening conduct,” seeking to “extort Liberato” and coerce the management by “stalking and harassing the patrons, management and employees of Liberato, defaming the Plaintiffs and other employees…and unlawfully interfering” with business. (Liberato’s legal counsel did not return requests for comment, but told The Village Voice they are only opposed to protest tactics that exceed legal boundaries.)

Meanwhile, the restaurant dismisses the LWC’s allegations of systematic labor abuses as “numerous frivolous and objectively baseless complaints.” It accuses the LWC of conspiring through private meetings with workers, in which the group promised to win back their unpaid wages, and of targeting workers identified as “most loyal to Liberato in order to harass and defame them.” (The LWC says its members were themselves harassed for picketing peacefully by an employee who apparently sided with the boss.)

As evidence, the restaurant furnished copies of campaign media denouncing the restaurant for labor abuses and urging others to join in solidarity with incitements like “Call Liberato’s owner and defend worker organizing.” The complaint cites the LWC’s grassroots victories—the unionization campaign at Hot and Crusty, and campaigning against alleged wage theft at Kenny Bakery in Inwood by aggressively picketing and chanting “Vergonzoso” (“shameful”)—to illustrate the LWC’s “extortionist scheme.”

The LWC agrees that its campaigns have been ruthless and effective, but not through racketeering, just creative direct action. While the restaurant argues that the LWC was “motivated by a quest for power, greed and ill-will,” the organizers say they’re only demanding the pay and respect they deserve, and yes, power—in terms of power to resist abuse and exploitation. Their NLRB complaint, in fact, charges that the company tried to illegally strip them of this power by firing two workers and unfairly disciplining another.

The LWC is fighting Liberato on two fronts: defending the original claims of abuse on the merits, and opposing the RICO suit on principle, warning of a pattern of manipulating anti-conspiracy laws to squelch protest. Such lawsuits could set a precedent of employers branding potentially any challenge from organized workers as “ill-will,” any public wage dispute as “greed,” and any workplace justice campaign as a “quest for power.”

LWC staff organizer (and RICO case defendant) Mahoma López Garfias says, “The company is violating all the labor laws, but how can…the company claim [the workers] try to extort the company when the only thing they’re doing is fighting for minimum wage? That’s unbelievable. That’s unacceptable…. We are asking for something the law requires for every single employee.”

In response to the legal complaint, the LWC argued that legal precedent dictates that civil RICO suits generally are not entitled to the kind of court injunction the restaurant has requested. More importantly, the group insisted that the protesters are simply exercising constitutional rights to free expression, and the allegedly disruptive (admittedly noisy) actions involve “speech, assembly, protest, and picketing: all activities within the ambit of First Amendment protection regardless of plaintiffs’ characterizations.”

Seattle University legal scholar Charlotte Garden has analyzed a history of employers using RICO to suppress labor activists: “These lawsuits are the descendants of the Supreme Court’s unexplained treatment of much labor speech as less worthy of protection than other types of speech.” But she argues that, with the exception of “speech that is actually malicious” or illegally coercive, “labor speech—which plays a unique role in civil society—should be on an equal footing with civil-rights speech. Thus, even if union advocacy qualifies as legal extortion, the First Amendment should trump civil RICO enforcement.”

The law so far seems to be on the LWC’s side. The NLRB recently provided some vindication to the workers’ grievances by allowing the complaint to proceed. Now, Crecencio says, “we are 100 percent sure they all think…we are correct. At this point in the NLRB case, I feel so positive.”

So regardless of the boss’s characterizations, the workers’ voices have been heard.