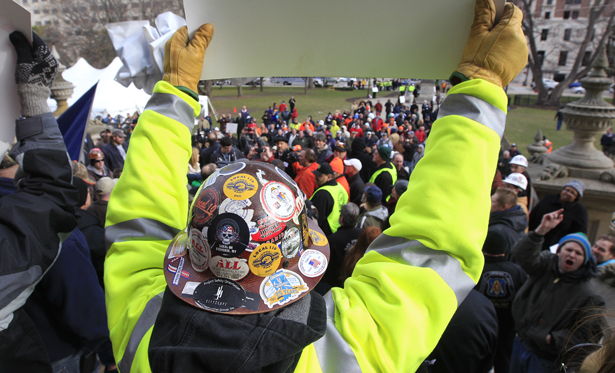 Last year, Tennessee school teachers lost their collective bargaining rights. So did municipal workers in Oklahoma. And farm workers and childcare providers in Maine. Research assistants in Michigan, too.

These attacks on labor were not isolated instances of ideological union-busting, according to a report released today by the Economic Policy Institute. The study traces the rise of a broad and coordinated campaign, fueled by corporate cash and conservative state legislators, to strip workers in both public and private sectors of their rights.

Since Republicans gained full control of eleven state legislatures in the 2010 midterm elections, states have passed a series of bills modeled on legislation written by the American Legislative Exchange Council and promoted by employers’ groups like the Chamber of Commerce and the National Restaurant Association. Between 2011 and 2012, four states rolled back or limited the minimum wage, which has already fallen behind inflation and greater hikes in the cost of education and medical care. Four states eased restrictions on child labor, and sixteen made it more difficult for the unemployed to get benefits. Fourteen states restricted the collective bargaining rights of public employees, or their ability to collect “fair share” fees from workers choosing not to become union members. “The most striking feature of the pattern of state legislation,” wrote Gorden Lafer, a political economist at the University of Oregon and the author of the report, “is the extent to which similar legislation has been introduced, in largely cookie-cutter fashion, in multiple legislatures across the country.”

Such legislation is neither locally inspired nor driven by economic necessity. “None of this comes from individual legislators,” Lafer said at a press conference today. “This is coordinated and national.” Corporate groups like the Koch brothers–funded Americans for Prosperity and the Club for Growth have poured money into state elections, helping to elect right-wing lawmakers who then peddle ALEC’s model bills, which incrementally shift the balance of power between employers and employees.

The results are wage and benefit cuts, poorer working conditions and fewer legal protections for all workers—unionized, nonunionized, public and private. Workers have lost overtime and sick leave. Others have been misclassified as independent contractors, losing unemployment insurance and workers’ compensation. While more than two-thirds of workers have some pay stolen from their paychecks each week by their employers, states have reduced support for the enforcement of wage laws. The same corporate lobbies weakening labor protections are also trying to stop people from voting in support of workers’ rights. Broadly, both conservatives and liberals support sick leave and minimum wage increases; accordingly, popular referendums have often rejected anti-worker bills favored by state legislators, and many municipalities have instituted their own employee protections. Employers’ groups have tried to roll back and pre-empt voters in several states, including Wisconsin, where lawmakers voted to prohibit localities from setting sick leave standards and nullified the sick leave law that 68 percent of voters in Milwaukee approved in 2008. Louisiana banned all local governments from instituting a right to sick leave.

“What we see simultaneously is a massive effort to directly cut down wages and benefits, take away rights, like the right to collect on wages or collective bargaining, but also…shrink democracy, to shrink the number of things about our economy citizens have the right to vote on,” Lafer said today.

The report also digs into the contradictions of anti-worker legislation. For example, ALEC argues against raising the minimum wage by citing studies that show “increasing starting wages lures high school students into the full-time work force, resulting in an increase in high school drop-out rates”—while working successfully in other states to roll back restrictions on child labor. In Idaho, adolescents are now permitted to do manual labor for ten hours a week, while Wisconsin lifted all restrictions for 16- and 17-year-old workers.

Perhaps the most glaring inconsistency is the fact that conservative lawmakers and employer lobbies often justify anti-union legislation as protection for non-unionized workers in the private sector. The report concludes that in fact these workers suffer the most when labor standards are undermined.

Fiscal crises are another oft-cited rationale for laying off public employees and cutting services. But the deepest cutbacks did not occur in states with the most significant budget deficits. The eleven states that became fully controlled by Republicans after the 2010 elections laid off five times as many of their employees in one year than the thirty-nine other states did on average. Nearly three-quarters of all the public workers laid off in 2011 worked for one of those states, or for the Texas government. Those twelve states accounted for just one-eighth of the deficits in all state budgets. Workers were already vulnerable to rising inequality and the weak economy, and deliberate attempts to weaken labor standards only worsens poor employment trends. The campaign is likely to continue. Lafer noted that many Americans underestimate the impact of Citizens United at the state level, where “it’s cheap to buy a state legislator.”

“These are the most powerful lobbies in the country,” Lafer said. “We should expect to see more of this.”

Zoë Carpenter travels to coal country to investigate the future of mining in the Power River Basin.