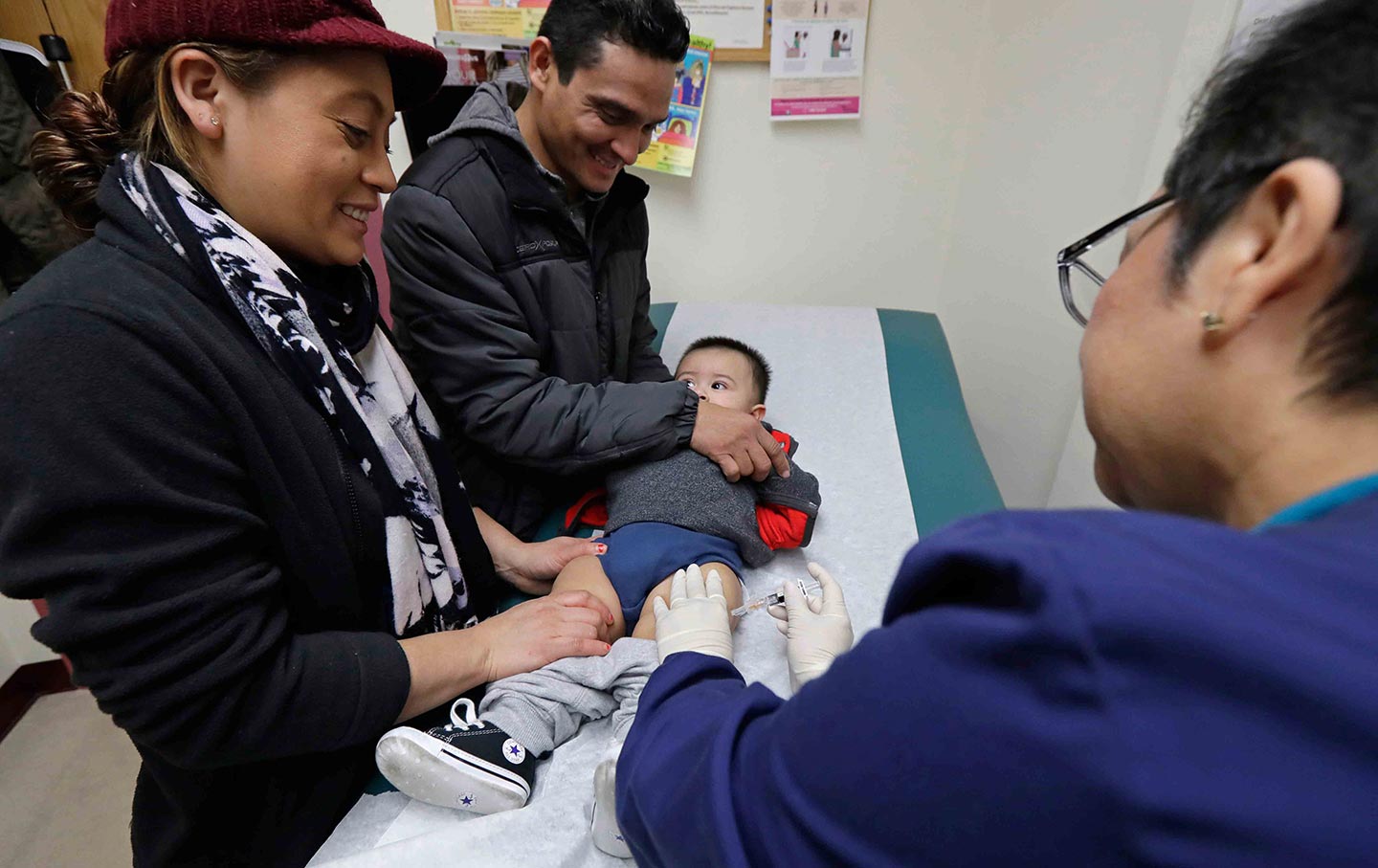 After a very brief government shutdown, the people who have defended Senate Democrats’s decision to relent so quickly have argued that at least Democrats secured six years of funding for the Children’s Health Insurance Program, while funding the government for only three more weeks—thus creating another leverage point to secure a solution for 700,000 Americans brought here as children. That last part is debatable, as my colleague Joan Walsh explained. But on the health-care side of this equation, Democrats still, unforgivably, left too many people behind.

In September, 70 percent of federal funding for community health centers expired, despite broad bipartisan support. A funding bill last December provided stopgap spending only until March. That means that in six weeks 2,800 facilities, with 50,000 provider and staff jobs, are at risk. So are the 9 million Americans who rely on these centers for health care. Communities throughout the country, from rural Nevada to Worcester, Massachusetts, to Montana have been screaming for help to prevent the looming crisis.

Congress didn’t listen. And by reauthorizing CHIP without concurrently doing so for community health centers, the flagship policy that could have pulled along community health centers is gone. Like it or not, that’s often how Congress works, with one higher-profile policy allowing less-heralded but equally critical measures to advance.

I’ll give you an example: a formerly perennial bill known in Washington as “tax extenders.” About 50 tax credits, for everything from Puerto Rican rum to thoroughbred horses, were habitually approved one year at a time, forcing an end-of-year scramble to re-up the tax extenders. The main reason that approach succeeded was because the research-and-development tax credit, easily the biggest of the tax extenders, was mixed in with the group. That created the needed energy to move the whole package along.

When Congress made the R&D tax credit permanent in 2015, suddenly the impetus to keep waving through small tax extenders with tiny constituencies, like those for NASCAR drivers and the like, vanished. The days of the annual tax-extender bill are over.

In that instance, ending what was a lobbyist-fueled onslaught of mostly corporate giveaways doesn’t move me to tears. But the same dynamic was at work with CHIP. In addition to community-health-center funding, a host of other lower-profile health programs that expired last year could have moved along with CHIP. This includes the Special Diabetes Program, which provides research for treatment of juvenile and other diabetes illnesses; the Maternal, Infant, and Early Childhood Home Visiting program, which serves 160,000 low-income families with guidance and assistance on postpartum depression, substance abuse, and domestic violence; and the National Health Service Corps and Teaching Health Centers, which assist mainly rural hospitals.

All of these programs had a shot at getting their funding renewed when CHIP was in the mix. Without that anchor, they have been orphaned and robbed of the high-profile support needed to get approval. Perhaps the saddest part is that extending CHIP for longer than its six-year term would have provided much of the funding needed for these programs. Because of changes to the individual mandate in the tax bill and other factors, CHIP would get significantly cheaper for budgetary purposes the more years it was renewed. The Congressional Budget Office estimated that renewing CHIP for six years, as the deal to end the shutdown did, cost no money. But renewing it for 10 years would have saved $6 billion. That could have covered at least a year or two of all these programs, including community health centers. Instead, they’ve been left to rot.

This doesn’t appear to have been part of the Senate Democratic leadership’s calculations on the funding bill. They were so busy extracting empty promises from Mitch McConnell about an unspecified DACA vote that they never bothered to concern themselves with these other critical health programs. Republicans’ initial offer was six years of CHIP and four weeks of government funding. Democrats, despite their votes being needed in the Senate, ratified essentially the same deal three days after rejecting it, without the inclusion of funding for community health centers, diabetes, family-home visiting, or teaching hospitals.

That’s truly unconscionable. Roughly the same number of people affected by CHIP are at risk with the loss of community-health-center money. The other programs are too small to get through on a standalone bill, and the populations served are typically too vulnerable to matter. They needed a champion like CHIP. There is significant overlap between the children and immigrants Democrats claimed to be their main concern in this fight, and the population served by community health centers, and the Democrats’ strategic failures mean those people lost twice.

Meanwhile, Republicans were concerned enough about bundling other health policy with CHIP in the funding bill to delay Obamacare-era taxes on medical-device and health-insurance companies. While poor people on the edge of society were abandoned, lobbyists for those giant industries made out just fine, safely tucked under the wing of the CHIP passage.

Where were the policy people in Senate minority leader Chuck Schumer’s office over the past few days? How could they so callously abandon such an enormous priority as health access, knowing what was on the line? Democratic politicians sometimes get so wrapped up with tactical nuances that they forget whom they’re supposed to be fighting for. Millions of voiceless people got screwed on Monday, and it’s not clear whether anyone will be able to make it up to them in the future.