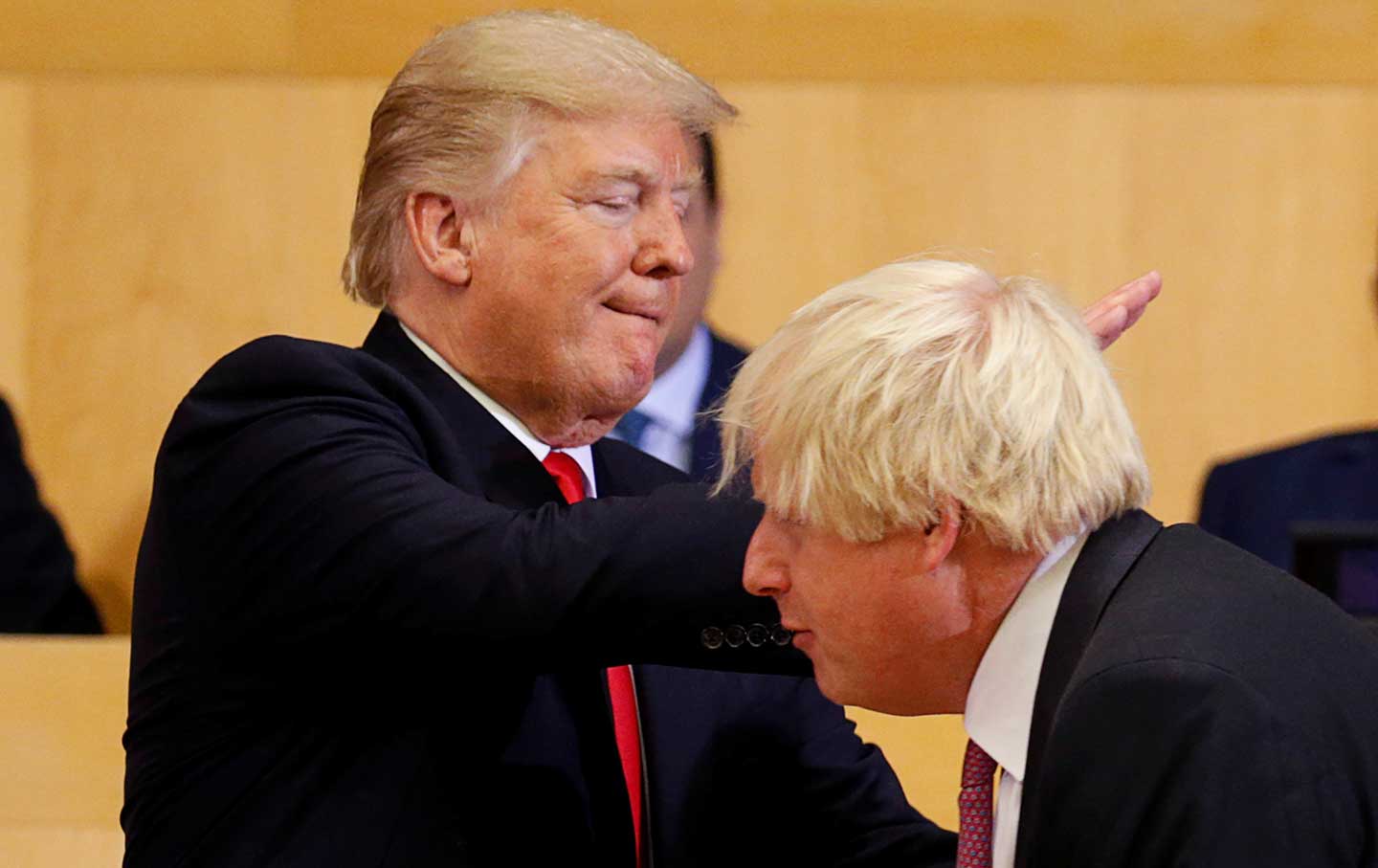 Lost amid the flurry of tweets from President Trump this week was a single message he sent cheering on British Prime Minister Boris Johnson’s shocking decision to suspend the British Parliament. Johnson’s move to “prorogue” the parliamentary session before elected representatives return next week from summer recess dramatically narrows Parliament’s options over if and how Britain will leave the European Union. The result has been a massive outcry in the United Kingdom, where more than 1.5 million people have signed “Parliament must not be prorogued or dissolved” petitions.

But Johnson was being cheered on from one precinct: the Oval Office. After the main British opposition party’s leader spoke of trying to block Johnson’s power grab, Trump tweeted:

Would be very hard for Jeremy Corbyn, the leader of Britain’s Labour Party, to seek a no-confidence vote against New Prime Minister Boris Johnson, especially in light of the fact that Boris is exactly what the U.K. has been looking for, & will prove to be “a great one!” Love U.K.

Trump is wrong. Members of Johnson’s own party are quitting in disgust, while British newspapers are describing his power grab as a “coup” and his tenure as “an unelective dictatorship.” Writing in The Guardian, Lady Shami Chakrabarti, the shadow attorney general for England and Wales, warned that “it isn’t just ‘no deal’ that No 10 might get away with if ‘shut-downs’ are now allowed. If ‘getting on with Brexit’ is an excuse, why not shut down to deal with the social, economic and civil fall-out? Why not in times of war? The Commons met during the Blitz, even when the chamber had been bombed. Right or left, in or out, no one voted for this, and Johnson’s hero, Winston Churchill, must be spinning in his grave.”

So why is Trump so enthusiastic about Johnson’s abuse of power? It is no secret that Trump has a thing for authoritarians abroad. Nor is it a secret that Trump has committed constitutional abuses of his own. In February, you will recall, he declared a “national emergency” in order to divert money to pay for a border wall after Congress refused to fund it—a blunt rejection of the separation of powers. Not too many years earlier, as a private citizen without the power of the office, Trump argued that mild executive actions should be seen as efforts to “subvert the Constitution of the US.” Now, he’s tossed aside the rule book. And he keeps signaling that he might go to even greater extremes.

In a July 23 speech, the president declared, “Then I have an Article II, where I have the right to do whatever I want as President.”

That wasn’t the first time that he claimed ultimate authority. In a June ABC News interview, he told George Stephanopoulos, “Article II allows me to do whatever I want.”

The president’s expansive—and incorrect—reading of Article II borrows from advocates for an imperial presidency. It dismisses out of hand the system of checks and balances and threatens our representative democracy. Past US presidents have used genuine emergencies to seize extraordinary powers—including Abraham Lincoln during the Civil War, Franklin Delano Roosevelt during World War II, and George W. Bush after the 9/11 attacks. They have acted without Congress’s consent and, at times, in direct contradiction of Congress’s desires and dictates—as Harry Truman did when he moved to seize the nation’s steel mills to ensure continued production during the Korean War, and as Ronald Reagan’s administration did with Iran/Contra. Often, the courts have thwarted these abuses, but not always—and then often after the fact, handing down vague interpretations.

Reimagining Article II has become a pet project of Trump’s. He clearly believes he has more authority than he currently chooses—operative keyword being “chooses”—to exercise. Unlike Boris Johnson, Trump is not in any realistic position to suspend Congress. But he’s used his office to encourage foreign leaders’ authoritarian tendencies, including Benjamin Netanyahu’s recent decision to block two congresswomen from traveling to Israel.

Over the last couple of years, Trump and Senate majority leader Mitch McConnell have been more than willing to game the rules in favor of the executive branch. And Trump has taken full advantage of McConnell’s greatest abuse of power, his refusal to allow hearings on the Supreme Court nomination of Merrick Garland, in order to pack the Supreme Court with his ideological and personal allies—one of whom, Justice Brett Kavanaugh, once argued that presidents are above the law.

So when Donald Trump cheers on Johnson’s assault on parliamentary democracy, Americans have every reason to be concerned—both for the United Kingdom and for the UK’s former colony. The founders of the American experiment worried about men like Trump, and as such, Article II places wise constraints on the presidency while granting considerable authority to the Congress and the states and requiring the president to respect and to work with the Congress. Article II includes, toward the end, the truest check and balance: “The President, Vice President and all civil Officers of the United States, shall be removed from Office on Impeachment for, and Conviction of, Treason, Bribery, or other high Crimes and Misdemeanors.”

Trump keeps endorsing authoritarianism abroad, while at home he keeps claiming that he can “do whatever I want as president.” His own words point to the prospect of a constitutional crisis, and that makes the continuation of his presidency too great a risk for Congress to permit. The case for Trump’s impeachment is well-established. It’s time for the legislative branch to use the authority with which the founders empowered it to check the wrongdoing in which the president has already engaged and to balance his next abuses of power.