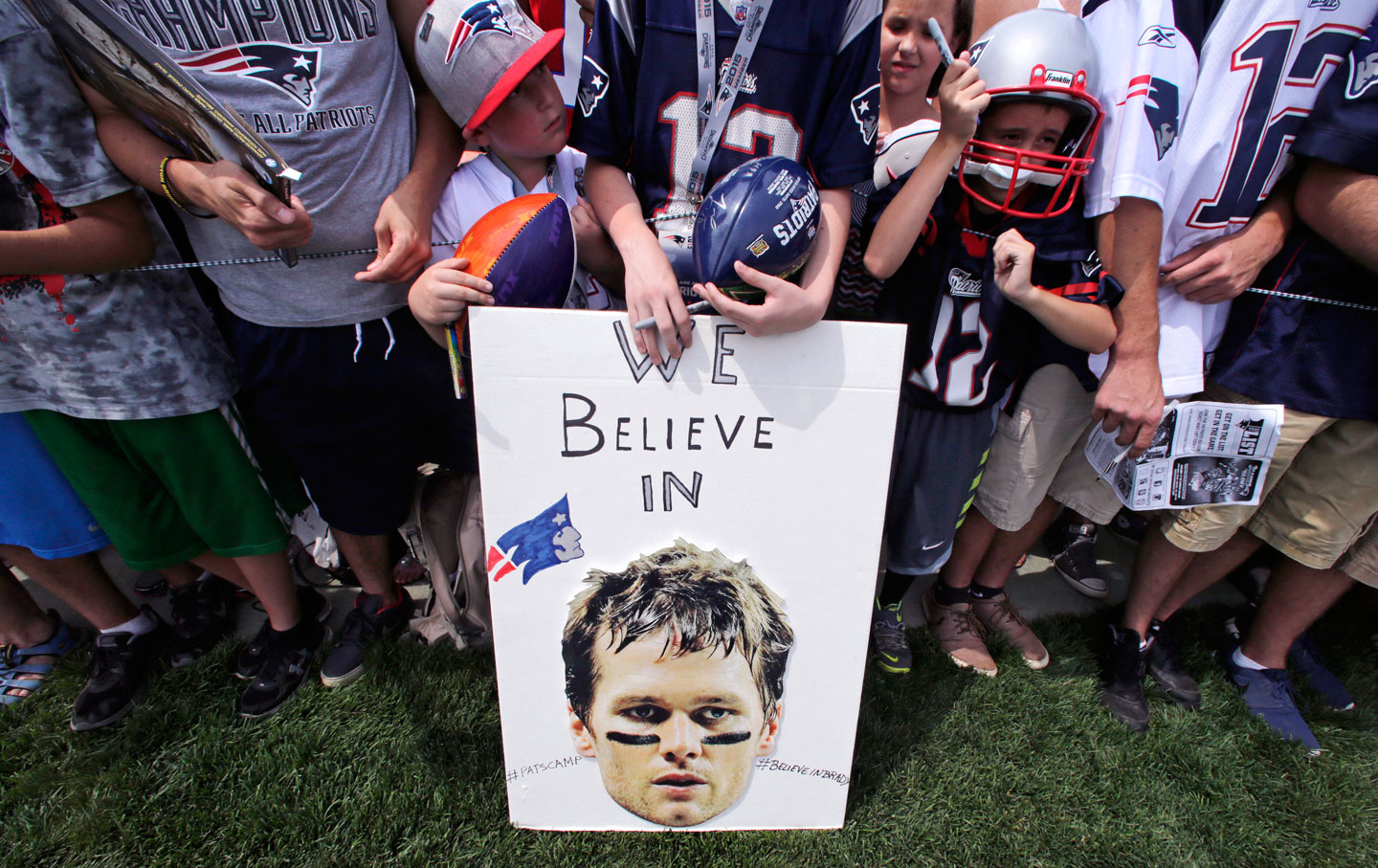 EDITOR’S NOTE: George Atallah is the Assistant Executive Director of External Affairs at the NFL Players Association. I spoke with him on the radio show I co-host with Etan Thomas, The Collision. Here is an edited version of our interview, where Atallah says a great deal about the NFL vs. Tom Brady and why this case—over whether Brady ordered footballs to be deflated—matters so much to the union.

Why is Tom Brady worth defending on this issue and why should people care about this case?

George Atallah: Fundamental fairness is the first thing that comes to mind. We have a CBA that outlines policies and procedures in place for both the employees and the employer. And when that CBA is violated, or ignored, or in this case, even worse, added to or changed without the other party even knowing about it, that violates the principle of fundamental fairness of our workplace.

GA: Well, fortunately and unfortunately, I didn’t go to law school and am [therefore] not a lawyer. So for me to read the tealeaves with respect to what the form or venue means, is not really my thing. What I really, strongly believe in is that the merits of our case are unchanged. Our filing in New York City today, is not going to be much different than our filing in Minnesota, yesterday. The principles by which we are taking this thing to court, to appeal Tom Brady’s four game suspension, are just as strong now as they were 45 minutes ago. And really, that is our point in this whole thing.

We’re appealing this because there was a violation of our CBA. We’re appealing this four game suspension because there was no precedent for it ever, anywhere, for anyone. And we’re appealing it because it violates the principles of fundamental fairness that we believe we should stand for. And whether that’s Tom Brady, or Greg Hardy or Adrian Peterson, or the players in Bounty or Ray Rice and the list can go on and on and on. That’s what we do as a union and that’s what we’ll always do.

Tom Brady said on his Facebook post that there’s no smoking gun and this controversy is manufactured to distract from the fact that they have zero evidence of wrongdoing. Patriots owner Robert Kraft took to the podium and said that he was wrong to put his faith in the league. Now those are some pretty strong words. Now that they’re going on the attack, what do you think the NFL and Roger Goodell will do?

GA: I don’t know how they’re going to react. I know that they were devious enough to leak the cell phone thing the day that they issued the four-game suspension to create a smoke screen as to what the real issues are. I know that they have been clumsy enough to issue a discipline that has no basis in any policy that applies to players.

This is the thing that always gets me that you will appreciate. They [the NFL] used a “general awareness” standard to punish Tom Brady. To punish a player. They used the standard of “more probable than not.” Well I can tell you that the owner of the Cleveland Browns was generally aware that his company was defrauding people of millions of dollars. And what punishment did the NFL levy on him? I can tell you that the owner of the Minnesota Vikings was generally aware that he was engaged in the longest-running fraud in New Jersey. And what did the NFL do with that owner? The answer to those questions is, obviously, nothing. Those are the things I think that we look at and say, ‘this is just not right,’ and that’s why we fight.

I know exactly how NFLPA Executive Director DeMaurice Smith would answer this, so I’m asking you kindly not to give that answer to this question. It would be “It’s not my job to get inside the heads of the owners.” So you’re not allowed to say that! Why in the blue hell has the NFL chosen to pursue this, in this way?

GA: I don’t know. I can certainly provide some analysis given that I’ve worked in this business for six years, going on seven now. I think that it’s very telling that after the initial discipline is issued, back in May, the first owner you heard come out on the record, in a long time, was John Mara, the owner of the New York Giants, who also is the head of the management counsel.

Yesterday, after the four-game suspension was upheld, you had another powerful owner in Jerry Jones come out and say we also support the commissioner and stand behind him.

So the analysis that I can draw from those two things, is that there has to be a level of owner-league office politics that nobody in our shoes can get at. That’s really what I think is contributing to all of this drama and unnecessary silliness about a deflated football issue…What I would like to see, honestly, is if this can happen to Robert Kraft and if the Patriots can have draft picks taken away from them on, like I said, a “general awareness” standard, in a ‘independent investigation…”

Another thing that gets lost in this, I know everybody is focused on the phone and certainly we can talk about that if you want, but imagine a world in which they hire an independent ‘investigator’ and as reported by Albert Breer of the NFL’s own network, legal counsel from the league office, saw the report and had input in editing the report before it was released.

What are we doing? What type of business are we running here that we’re trying to create smoke screen on an issue that’s not really material to the facts and we’ve got all sorts of — if this was politics, you’d call it corruption, wouldn’t you?

GA: I think it was rather interesting, and I’m using interesting as the softest word I can come up with, that they leaked the fact that ‘Tom destroyed his phone’ on the same day that they are trying to justify a four-game suspension for something that, frankly, they have no evidence that he did.

I think that the cell phone thing, frankly, is a distraction from the real issue. I’d much rather be in a world where people are analyzing why NFL legal counsel had input and edited the Wells Report before it went public.

I’d much rather people look into Adam Schefter’s report as to why the two Patriots employees were suspended or disciplined with a wink-wink, nod-nod that discipline on the Patriots would be reduced.

Those are the things I’m interested in because those show the core issues of corruption and cover-up and all of the things that, frankly, we don’t want to see in our business.

How can the NFLPA appeal anything if they collectively bargained Goodell having those powers in the CBA?

GA: Because the collectively bargained authority that he has also maintains a certain level of fairness and guidelines. I don’t know if this analogy is going to work. but it’s like the disciplinary powers of the commissioner, we’ve probably given him too big of a sandbox to play in, but there’s still a sandbox. And once he goes out of that sandbox, he’s now violated the CBA.

So that’s really the best response that I have to that is: There is a sandbox. And if he plays out of that sandbox, he’s in violation and then we have to reel him back in.

And there wouldn’t be this many lawsuits if there was a disciplinary process that was collectively bargained for, right?

GA: Absolutely. Keep in mind, also, where collective bargaining does work. Look at our drug policy. There’s no drama about our drug policy. A player gets tested positive, he knows what the process is for that. The league adheres to that and we move on. The player accepts his punishment and we move on. Or if there’s a failure in process, the player is exonerated and we move on. That doesn’t seem to be the case when we’re dealing with these disciplinary cases handled by the commissioner. You’ve gotta wonder…. How we’re in this world of kind of comparing disciplinary decisions and whether one person should get four games or three games or two games, that’s really just a creation of the league’s arbitrary process. If they had a consistent process and if they had a disciplinary schedule that makes sense, just like we have in our drug policies, a lot of this kind of goofy, hot-take discussion would go away.