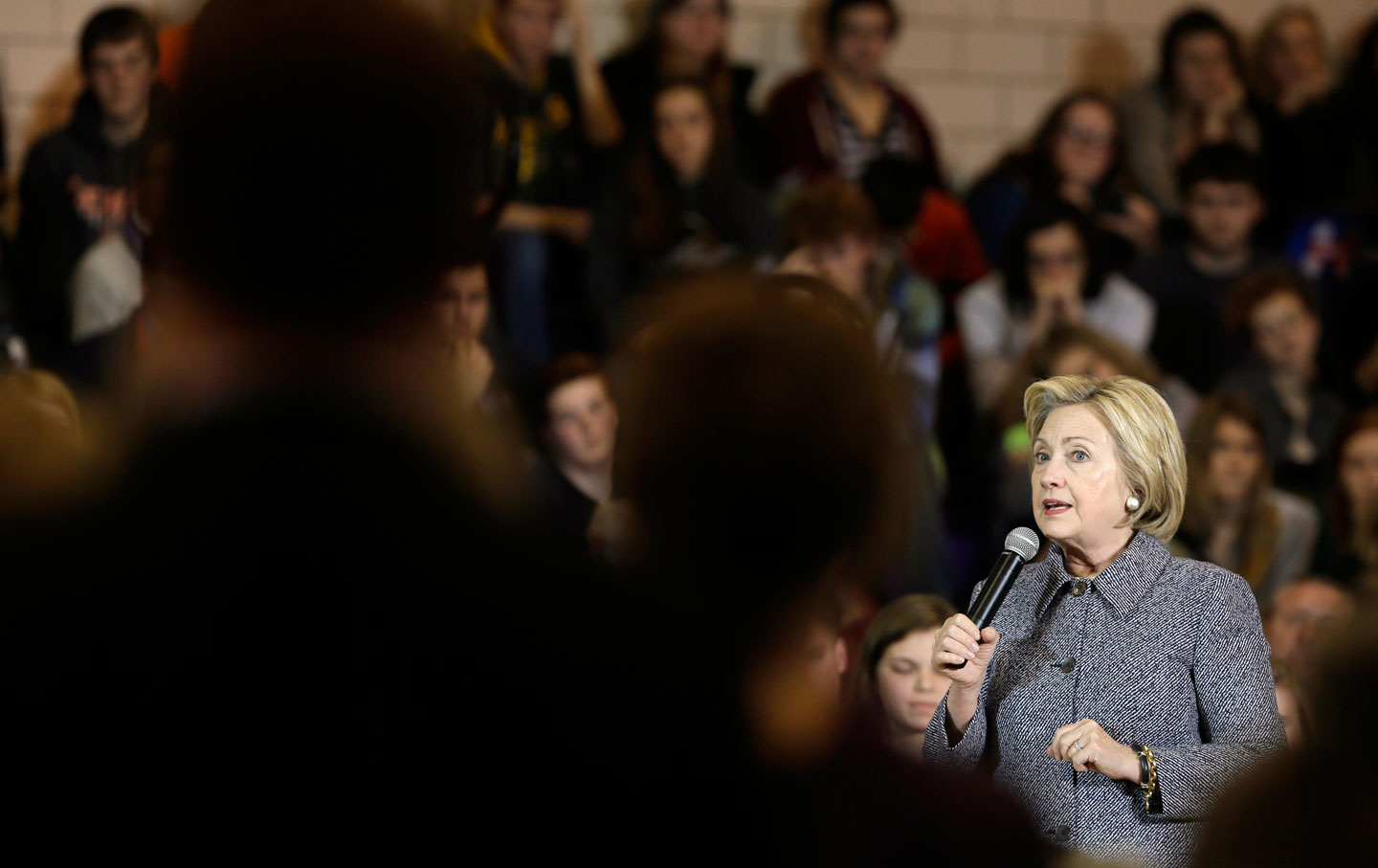 Socialism, it turns out, can be a form of identity politics. Some feminists, including Suzanna Danuta Walters, brandish a “red-diaper baby” heritage or some other cultural or sentimental affinity to hint that supporting Hillary Clinton’s candidacy doesn’t just represent some corporate gloss on feminism; it’s a genuinely radical position.

This article draws on material included in the collection, False Choices: The Faux Feminism of Hillary Clinton, edited by Liza Featherstone, which is forthcoming from Verso Books this spring and can be pre-ordered here.

But no one who makes this argument can articulate what, beyond her identity as a woman, qualifies Clinton as a passable candidate for socialist feminists. That’s understandable because, in a primary against an independent socialist who has been attracting an astonishing level of grassroots support, there are no socialist-feminist reasons to support Hillary Clinton.

Socialist feminism assumes that redistribution is the best way to begin improving life for the vast majority of women, both materially and socially. To take a none-too-radical example, in countries like Denmark and  Sweden—which offer a broad range of social benefits provided through the state rather than acquired in desperation, as they so often are here, through marriage or a job—women can live more comfortably; raise healthier, more secure children; and sleep with whomever they please. Throughout her long career, Clinton has demonstrated contempt for turning this project into policy.

Why This Socialist Feminist Is For Hillary

As first lady of Arkansas, she led the efforts by her husband’s administration to weaken teachers’ unions and scapegoat teachers—most of them women, large numbers of them black—for problems in the education system, implementing performance measures and firings that set a punitive tone for education reform nationwide. Rather than trying to walk this back, Clinton recently said that as president, she would close any public school “that wasn’t doing a better than average job.” Fuzzy math aside, this suggests a regime of pressure on America’s mostly female teaching force—81 percent of elementary- and middle-school teachers are women—that would make her predecessors look like presidents of a giant homeschooling hippie collective. Hillary’s socialist-feminist boosters might want to ask themselves: What kind of socialist feminism supports undermining black women on the job while imposing austerity on the public sector? And lest you think Clinton’s financial hawkishness is reserved for K–12, she also opposes free college tuition, though the United States is the only country where students—57 percent of them women—are saddled with decades of debt as the price of attaining higher education. Defending this position, Clinton recently said that it was important for people seeking a college degree to have “skin in this game.”

It would be hard to imagine a bigger blow to the  material well-being of poor women in America than President Bill Clinton’s move in 1996 to “end welfare as we know it” by signing the Personal Responsibility and Work Opportunity Reconciliation Act. As first lady, Hillary wasn’t a mere spectator to this; within the White House, she advocated harsher policies like ending traditional welfare, even as others in the administration, like Labor Secretary Robert Reich, proposed alternatives. Clinton defended her preferred policies by demonizing mothers struggling to get by as “deadbeats” who were “sitting around the house doing nothing.” Rush Limbaugh couldn’t have said it better. Asked recently to comment on this legacy, Hillary declined. And while the last Clinton administration claimed that it would offset welfare reductions with pressure to raise wages (the majority of low-wage workers in this country are women), and while a growing movement is demanding a $15 minimum wage, Clinton has made it clear that $12 is just fine with her.

Abroad, socialist feminists oppose imperial adventures because war makes life hell for the majority of women, tending to exacerbate whatever material inequalities already existed. Yet Clinton, as secretary of state, went so far as to claim that wars could help liberate women—for example, by making the Taliban respect human rights in Afghanistan. During her tenure as secretary of state, rape and femicide increased in Honduras, Iraq, and Libya, due to the interventionist policies that she nurtured and executed. In Honduras, she provided cover and backdoor encouragement to a coup against a democratically elected leader, which allowed reactionary forces to come to power and begin a phenomenally violent chapter in that country’s history, during which, according to Mark Weisbrot of the Center for Economic and Policy Research, the murder of women has “skyrocketed.” Clinton has always supported the war in Iraq, both as New York senator and as secretary of state. She was, in the Obama administration, the most vocal advocate for intervention in Libya. Not only have many women died in the US attacks on civilians in those countries; the US presence has nourished the rise of religious extremists like ISIS, for whom femicide is a way of life.

This year, there is an actually existing socialist-feminist candidate in the Democratic primary: Bernie Sanders.

But surely, if nothing else, Clinton can be counted on as a staunch ally against the war on women at home? Not so. She has said that abortion should be safe, legal, and “rare”—a qualifier that contributes to the stigma against the procedure. Last summer, during the right-wing attacks on Planned Parenthood that would later inspire a deadly shooting at a Colorado Springs clinic, Clinton tried to split the difference, saying one week that she found the videos about Planned Parenthood’s supposed practices “disturbing,” and the following week clarifying that she supported the organization—a bold stance from someone who once said that “women’s rights are human rights.”

In a normal election season, all of this would be reason to agitate, but not necessarily to work or vote against the candidate—after all, what’s the alternative? This year, however, there is an inspiring reason to vote against Hillary: an actually existing socialist-feminist candidate in the Democratic primary. I’m talking, of course, about Bernie Sanders. He’s no Marxist revolutionary—if you’re waiting for someone who will expropriate the expropriators, you’ll have to wait a little longer—but he has spent his life fighting, consistently and without apology, for social-democratic policies that would improve the lives of a majority of American women. In contrast to Clinton’s devotion to imposing shame and austerity on poor women and their kids, Sanders helped lead the Senate opposition to Republican efforts to cut the WIC program, which provides nutrition assistance for mothers, babies, and pregnant women—and he has said that, as president, he would expand it. Other prominent planks in his platform that should be of interest to feminists include free college tuition, single-payer healthcare, high-quality childcare for all Americans, and a $15 minimum wage. In contrast to Clinton’s waffling on Planned Parenthood, Sanders has said that he would increase federal funding to the organization; and as part of his single-payer plan, he would expand support for women’s reproductive-health services.

Of course I’d like to see little girls—still besieged by the pressure to be pretty at the expense of being powerful—to be inspired by the image of a woman president, as they have been by the rise of the US Women’s World Cup team. But unless those girls are part of a small elite, most will never grow up to enjoy equality with men absent the kind of reforms that Sanders is advocating. A Clinton presidency would be symbolically uplifting, even as it slammed the door on the possibility of genuinely improving the lives of most of the world’s women.

Clinton was honest about how deeply at odds with any democratic-socialist movement she is. “We’re not Denmark,” she said, praising the “opportunity” and “freedom” of American capitalism. With this bit of frankness, Clinton helpfully explained why no socialist—indeed, no non-millionaire—should support her. She is smart enough to know that women in the United States endure far more poverty, unemployment, and food insecurity than women in Denmark—yet she shamelessly made clear that she was happy to keep it that way.