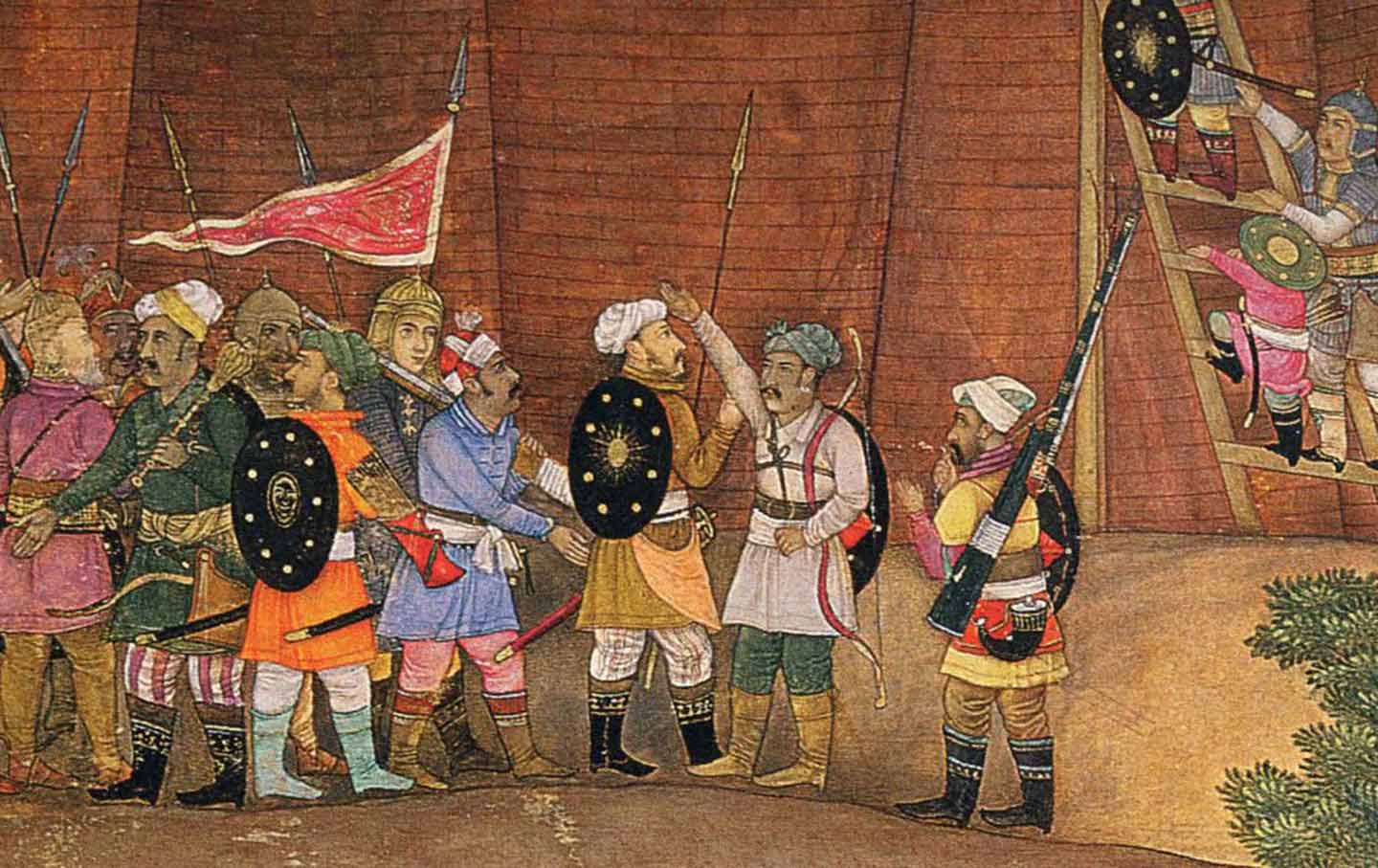 Painting from the Padshahnama, which chronicles the reign of Mughal Emperor Shah Jahan, circa 1636. This month an education group aligned with India's ruling party recommended revising textbooks to delete mentions of the policies of religious tolerance maintained by many Mughal rulers. (Public Domain)

Seventy years ago, the departing British partitioned colonial India into the independent nations of India and Pakistan. India, with its capital in Delhi, was conceived as an ostensibly secular and pluralist state. Pakistan, with one half to the west of India and the other to the east (what is now Bangladesh), was devised as a homeland for the Indian subcontinent’s Muslims. Hindus and Sikhs fled to India while many Muslims moved in the opposite direction. Fifteen million people were uprooted. Even now, in the wake of the Syrian refugee crisis, the partition of India remains the largest displacement of human beings in world history. It is remembered in South Asia for the atrocious slaughter that accompanied the mismanaged mass migrations, with upward of 2 million people killed.

It wasn’t just land and people that were divided. The assets of the British Indian state had to be allocated to the new countries. This was an often thorny and convoluted process, with bureaucrats wrestling over everything from official government records to the collections of libraries to desks, chairs, and stationery. It produced odd diplomatic sagas, like the farcical episode when an elephant that was the property of the Forest Department was assigned to Pakistan even though its driver had declared for India, leaving the creature marooned for 10 months on the wrong side of the new border.

Fiercer battles were waged over which country had a right to the history of the subcontinent. One particularly contentious negotiation revolved around the artifacts of the Indus Valley Civilization.

It’s not surprising that the two fledgling nations would covet this heritage. When archaeologists uncovered the remains of the Indus Valley Civilization in the 1920s, those revelations lengthened the conventional understanding of Indian history by millennia. Indians could point to sophisticated cities and centers of cultural production that matched Egypt, China, and Mesopotamia in their antiquity. Jawaharlal Nehru, one of the most prominent leaders in the independence movement and eventually the first prime minister of India, visited the Indus Valley city of Mohenjodaro in the 1930s and was amazed by what he saw. “Astonishing thought,” he wrote, “that any culture or civilization should have this continuity for five or six thousand years or more; and not in a static, unchanging sense, for India was changing and progressing all the time.” 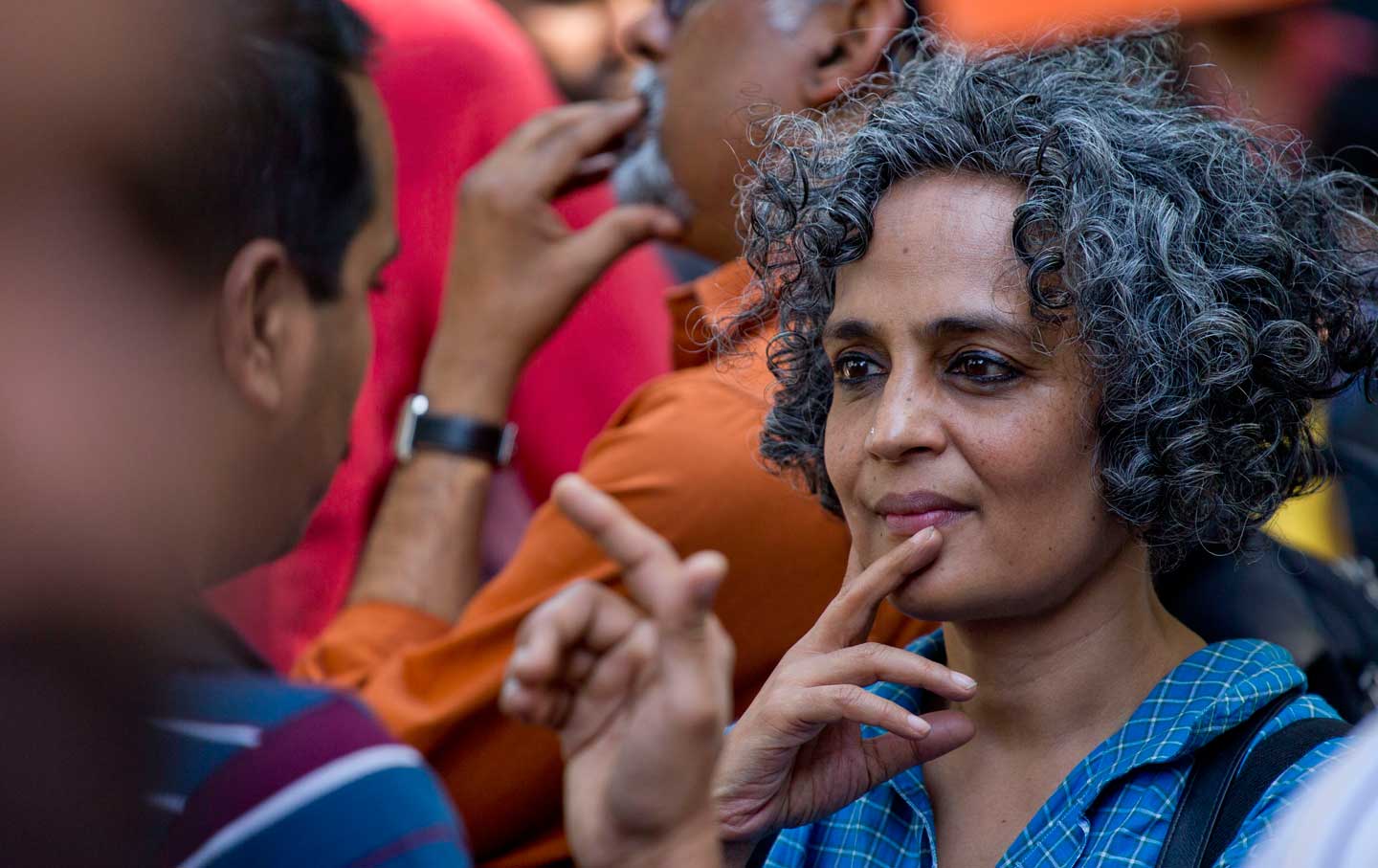 The Air We Breathe: A Conversation With Arundhati Roy

All nation-states—but especially new ones—use history to burnish their claims of grandeur and legitimacy in the present. After partition in 1947, both India and Pakistan laid claim to the physical and symbolic inheritance of the Indus Valley Civilization. In 1950, while working as a consultant with the Pakistani government, the British archaeologist Robert Eric Mortimer Wheeler published an archaeological survey titled Five Thousand Years of Pakistan that sought to endow millennia of history upon a three-year-old nation. A modern nation-state drawn up by British civil servants in the middle of the 20th century can hardly be a prism for understanding South Asia’s deep past. And yet that implausible notion is still invoked by Pakistani nationalists today.

But India also insisted on its connection to the Indus Valley Civilization, even though the major Indus sites now all lay across the border in Pakistan. In Museum of Lost Objects, the BBC radio series that I present, we explore the fate of a 4,500 year-old necklace that fell victim to the bludgeoning logic of nation-states. Around the time of partition, a trove of objects from Mohenjodaro was apportioned to either country. These included an exquisite ancient gold-and-jade necklace. Neither India nor Pakistan could allow the other to have the necklace whole, so it was literally divided down the line. If you visit the National Museum in New Delhi, you can find the Indian half of the necklace displayed as an intact piece, stripped of any indication that it was dismembered during partition.

Of course, India and Pakistan have had much more heated contests; they’ve fought several wars and remain at loggerheads over the disputed territory of Kashmir. But the battle over the Indus Valley objects presaged the enduring importance of historical symbols in modern Indian politics.

In India, history is increasingly finding its way into contemporary debates. That is in large part because Hindu nationalism or “Hindutva”—the defining ideology of the ruling Bharatiya Janata Party (BJP)—draws its animus from the past, or at least a vision of the past. (Full disclosure: My father is a member of Parliament for the opposition Congress party, but my views on these issues far predate his political activities.)

At stake is the very conception of what defines India. Is it the pluralist civilization that leaders of the independence era like Nehru imagined? Or is Indian civilization synonymous with Hindu civilization and identity?

The BJP and its ideological allies believe that India is fundamentally a Hindu nation with a proud Hindu history. Using this as justification, it routinely invokes and attempts to correct imagined historical grievances. After years of mobilization, activists in 1992 demolished a nearly 500-year-old mosque in Ayodhya in the north of India, because it was thought to sit on top of a temple that marked the birthplace of the Hindu deity Ram.

The main target of Hindu nationalists is India’s Muslim community, who compose roughly 15 percent of the population (close to 200 million people). Islam has been in India for over a millennium, but Hindu nationalists often depict Muslims as outsiders who are graciously “tolerated,” making their presence in India a testament to foreign invasion and their history one of foreign tyranny.

An earlier generation of Indian nationalist embraced the memory of the Mughal empire, the Muslim dynasty that ruled much of northern India from the 16th to the 19th centuries and left behind grand monuments like the Taj Mahal. Not the Hindu nationalists. In recent years, the BJP and its allies have changed the names of a road and train station associated with the Mughals. Just this month, the western state of Maharashtra published textbooks that cut out the Mughals almost entirely. And tellingly, a BJP-aligned education group recommended revising Hindi-language textbooks to delete mentions of the tolerant policies that certain Mughal rulers maintained toward non-Muslim religious communities.

These kinds of controversies may seem arcane, but they occur in all societies. Think, for instance, of the recent furor in the United Kingdom over the suggestion in a BBC cartoon that a family in Roman-era Britain could be dark-skinned and African (which was entirely plausible). The idea that modern multiculturalism could find an echo in ancient Britain upset many right-wingers. It offended their belief in Britain as a primordially white nation.

Similarly, evidence of the plural history of India poses a problem to Hindu nationalists who want to define India as an eternally Hindu nation. That’s why they are engaged on several fronts in fighting a cultural war of historical revisionism. This battle for the past has extended to the Indus Valley Civilization. Where Nehru turned to Mohenjodaro as an example of general Indian accomplishment, some Hindu nationalists now attempt to claim the Indus Valley as a “Vedic” or Hindu culture, a dubious assertion according to historians.

These historical debates have real consequences. Since Narendra Modi became prime minister in 2014, Muslims and other minority groups have become increasingly demonized at all levels of society, resulting in a horrific spate of attacks, riots, and lynchings in the past year. Much like the pluralist nationalists before them, Hindu nationalists seek to impose their understanding of history on the country to mold the present. But they turn to the past in order to divide and exclude, to suggest that even though all Indians are equal, some are more equal than others.