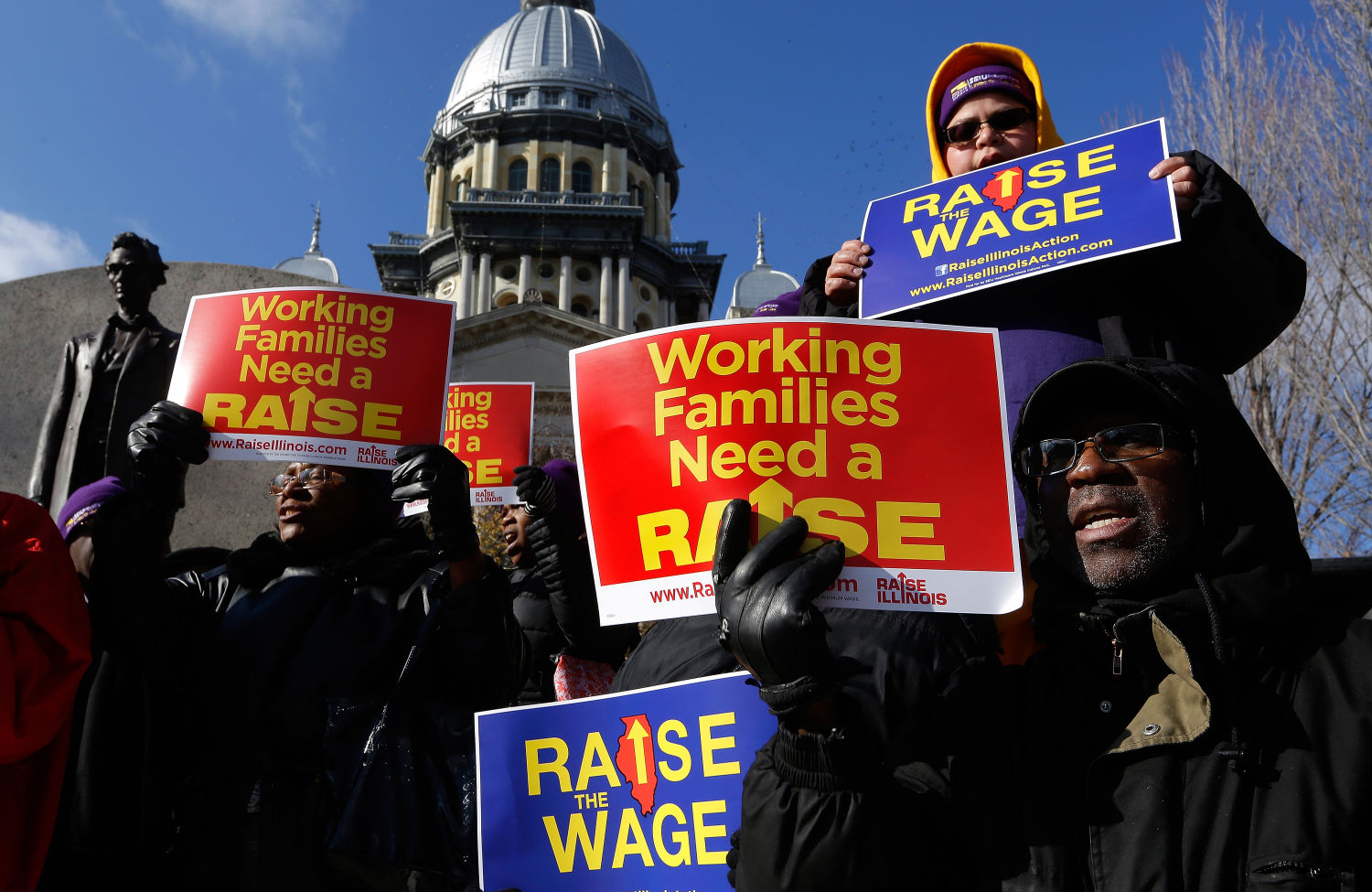 Supporters of legislation to raise the minimum wage in Illinois rally outside the state Capitol Thursday, November 20, 2014, in Springfield (AP Photo/Seth Perlman)

I am a lifelong organizer—in labor and community settings—and am proud to say that I helped spearhead the living-wage campaign in Baltimore twenty years ago this fall. Our campaign was led by the religious leaders of BUILD—Baltimoreans United in Leadership Development, an affiliate of the Industrial Areas Foundation—along with a team of determined low-wage service workers. While we received support from the American Federation of State, County, and Municipal Employees (AFSCME), this effort was conceived, planned, implemented and owned by local civic and clergy leaders alongside local workers. We won in Baltimore. Then, two years later, with almost no support from organized labor, we won in New York City. And we found that we had sparked a wave of living wage battles in cities and counties across the country that continues to this day.

It pains me to say this, but I now believe that the effort going into raising the minimum wage and passing living-wage bills fails to address the fundamental cause of low wages and terrible conditions: a lack of worker power. Those who believe, as I do, that workers deserve a living wage and decent benefits, can’t ignore the fact that twenty years of mobilizing around higher minimum wages and legislated living-wage standards have not closed the wage gap. That gap has continued to grow. And the rate of growth has accelerated. It’s not a gap that will be filled by legislated solutions. It can and will only be filled by organized workers willing to fight for better wages and benefits in their own workplaces.

So, consider me a friendly and constructive critic of the living-wage campaign approach that I helped start.

We had other critics twenty years ago. They predicted the living wage would cause massive layoffs of workers. Their worst fears were never realized. There were no layoffs; wages went up; absenteeism went down; the world continued to turn on its axis. Our critics also feared that paying a living wage would lead to higher taxes. It didn’t. They predicted that paying a few hundred workers a few dollars more an hour would undermine the mighty trillion-dollar market. It didn’t.

We developed the living-wage strategy because, in the early 1990s, more traditional unionization campaigns became almost impossible in an environment of outsourced work, weak labor laws, and outmoded and sometimes undemocratic union representation elections. We came up with an alternative strategy.

We began by creating an organization of Baltimore service workers—cafeteria workers and custodians at public schools and in public buildings—who performed the same work as city employees but for private contractors. This new organization then joined forces with BUILD, a strong community organization made up of mostly religious institutions, and with AFSCME, which gave the organization a charter so that it was officially a local union—albeit a union without any contracts. Everyone involved—the workers (of whom there were 1,000 dues paying members), churches and other allies—was united around the goal of getting a bill passed by the city council that would prescribe wage levels in city contracts.

In the fall of 1994, we succeeded: the city council passed Ordinance 442, which required all city service contractors to pay a wage that would lift a full-time employee with a family of four above the federal poverty standard. That wage was set annually by the Baltimore Board of Estimates and was enforced by the Baltimore Wage and Hour Commission.

The strategy worked. Wages went up dramatically. Within two years, workers employed by city contractors had nearly doubled their take-home pay. Using legislation rather than collective bargaining, we had managed to bid up the wages of the privatized workers to a rate where it became economically advantageous for the city to take much of the contracted work back in house. This was the opposite of outsourcing. The workers were now public employees, and they left our specially formed local union, enrolled in the AFSCME municipal local and joined the working middle class. Some bought homes, and the first of those workers will begin retiring on city pensions next year.

In the years that followed, we took this model to London, New York and Tucson and won. The formula was clear: organize workers; work closely with authentic community leaders through a broad-based organization like BUILD; push for higher wages, often through legislation; maintain the worker power to enforce the agreements and build on them.

It’s unfortunate that living-wage campaigns inspired by our successes have retained only part of the formula. Most of those campaigns are not started or deeply rooted in local civic or religious institutions. They are manufactured by activists who raise funds from progressive foundations and create coalitions that have little or no participation by the workers themselves. A pre-packaged bill or ordinance is then drafted and passed, stipulating wage levels for contract service work. Once that bill passes, everyone, essentially, goes home. Workers are somewhat better off, but no permanent worker power is left in place. They are what one labor leader called “workerless campaigns.”

Others advocate for workers. But no one organizes with and primarily through those workers. In fact, the workers who end up receiving higher wages often have no clue as to how these raises occurred. And, once the lights go down and the music stops, they are completely vulnerable to attempts to reduce those raises. Not having fought for the raise (or learned how and with whom), they are not likely to fight to keep the raise. And they are in no position to fight to spread the living-wage standard to other workers. That is one reason why, in spite of two decades of hard work in hundreds of jurisdictions, we are still talking about ever widening income gaps in our economy.

The solution now presented is a raise in the minimum wage. I am for that. But if we have learned nothing else in the last twenty years of living-wage work, it is that advocating for low-wage workers to get a raise is not enough. Raising the minimum wage will help families in the short run. But just like the living-wage movement, it will fall short.

Workers don’t need or want anymore “workerless campaigns.” They want to participate. And fortunately, we can point to some examples where some of the lessons of the original living-wage campaigns are informing good worker organizing.

One of the best is in Atlanta, Georgia, where the Amalgamated Transit Union (ATU) is demonstrating that inactive locals can be rebuilt and provide strong bases to expand union membership. Local 732 of ATU in Atlanta represents close to 3,000 men and women who provide public transportation in metro Atlanta. In 2013, these members were under attack. They had not received a raise in eight years; the state legislature was threatening to take away their pension plan; and the management of MARTA, the transportation authority, had developed plans to privatize large portions of the agency.

The union, working with religious and community groups, fought back. It began a campaign to connect with bus riders by having volunteers ride on the buses, talk to riders, find common cause and sign them up as supporters. Local 732 then became the lead union in a coalition to expand public transportation to Clayton County, Georgia.

Clayton County is a large suburban county just south of the Atlanta Airport that has had no bus service for the last four years. For thousands of Clayton residents, this has meant either paying up to $10 a day to gypsy cab drivers to deliver them to the closest MARTA station or not being able to afford to go to work. By organizing to expand MARTA service, the union was pushing to bring a desperately needed service to the area’s residents; it was also building its ranks since the expansion would also mean up to 500 new living-wage jobs for members of local 732.

The union recruited 150 rank-and-file volunteers who walked precincts and turned out voters to support a referendum raising sales taxes to fund the expansion of the MARTA to their county. When the results came in on November 4, Clayton County voters had voted overwhelmingly to raise their taxes to support the expansion. Bucking a national trend, these voters endorsed higher taxes and more public services.

There was another victory. Two days before the vote in Clayton County, Local 732 reached a contract agreement with MARTA. For the first time in eight years, Local 732 MARTA workers negotiated a raise in pay.

Local 732 had engaged in a genuine living-wage campaign—one that is the beautiful byproduct of a campaign to build worker power. The 150 new union activists own this victory. They had help from other “progressive” citizens, but this time those “progressives” were not the advocates for the workers—they were allies.

For those who organize and fund living-wage and minimum-wage advocacy campaigns, we hope they will join us in a reassessment of the last twenty years. There is good organizing to do. There are union leaders willing to engage religious and civic leaders in forming new alliances. While organizing workers and building deep community alliances is difficult, it is where my colleagues and I, allied with like-minded union leaders, hope to spend the next twenty years.