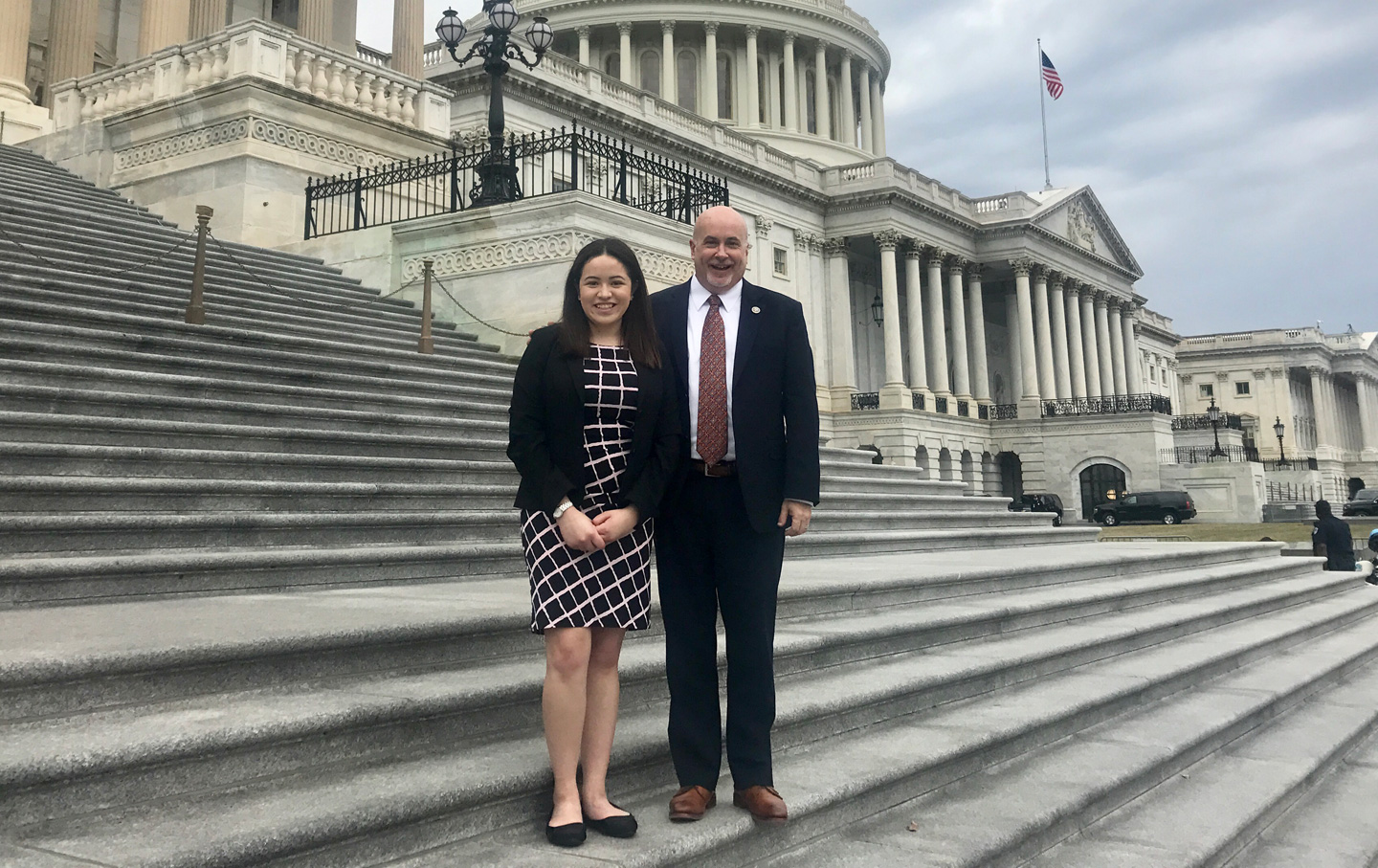 DREAMer Lupe Salermón and Congressman Mark Pocan outside the Capitol. (Photo courtesy of the office of Mark Pocan)

Just over a month into office and having faced one scandal after another, the Trump administration is hoping to hit the reset button tonight with the president’s address to a joint session of Congress. Without a hint of irony, the White House reportedly plans to unveil a message of unity and “invite Americans of all backgrounds to come together” as Trump lays out a policy agenda.

But basic human decency prevents me from going along with this charade. It’s not just that the policies that President Trump and House Republicans are promoting—like stripping health care from millions—are shockingly cruel (although they are). It’s also because I simply cannot allow Trump to distract us with so-called “unifying” rhetoric when he has produced so much suffering, fear, and division across the country.

In a few short weeks, for example, Trump has “taken the shackles off” federal agents in charge of deportations. In February, Immigration and Customs Enforcement (ICE) officials in Virginia were lying in wait across the street from a church’s hypothermia shelter to perform early-morning arrests of Latino men who had sought refuge from the cold. In Seattle, ICE agents wrongfully detained a 23-year-old protected by the Deferred Action for Childhood Arrivals (DACA) program, claiming his tattoo, “La Paz”—or peace—was a gang insignia. Border agents in search of people to deport at New York’s Kennedy Airport stopped airline passengers arriving from San Francisco from disembarking, forcing them to present identification.

That’s why I’m honored to bring Lupe Salermón as my guest to attend President Trump’s speech tonight. Lupe, a freshman at Edgewood College in Madison, Wisconsin, is a remarkable young woman resisting Trump’s attacks on people like her and her family, who moved from Mexico City to Madison when she was just 6 years old.

Even in the face of the election of one of the most anti-immigrant voices in our country’s history, Lupe told me recently that we’re witnessing “an awesome movement that’s only building.” “We are coming out of the shadows,” she continued, “and our identity—undocumented and unafraid—is allowing us to confront the challenges under Trump with power and resilience.”

Lupe first got involved in politics as a student in high school, helping to organize a protest on the steps of Wisconsin’s state capitol against two repressive, anti-immigrant bills pushed by Wisconsin Governor Scott Walker. Her small group of fellow activists at the school’s Latino student union had no idea that hundreds of people would eventually join them, attracting massive press attention, or that their actions would help force Governor Walker into retreating from the discriminatory legislation.

Today young DACA recipients like Lupe, also known as DREAMers, are bravely speaking out at precisely the moment when legal specialists are warning them “to lie low as Trump ramps up deportation plans,” as a recent newspaper headline put it.

Although Trump promised to “show great heart” in dealing with DREAMers, we all know that talk—especially when it comes from this president—is cheap. Trump’s homeland security secretary, John F. Kelly, directed his agency to no longer exempt any categories of undocumented immigrants from enforcement, and White House Press Secretary Sean Spicer made the administration’s posture toward DREAMers clear: “everybody who is here illegally is subject to removal at any time.”

This makes grassroots efforts like Lupe’s—from organizing protests against mass raids, to building sanctuary policies with faith groups and local governments across the country, or fighting for the basic human rights of our community members who are already detained—more urgent than ever before.

As my Democratic colleagues and I attend tonight’s speech, we will be accompanied by DREAMers like Lupe; Muslim Americans like Aneelah Afzali, a longtime local community activist whose mosque was vandalized after the election; and Hameed Darweesh, an Iraqi interpreter who was detained at an airport because of Trump’s travel ban. We believe that the president should have to look our brothers and sisters in the eyes—fellow Americans caught in the crosshairs of bigotry —before he offers up clichés about inclusion and understanding.

Today, the key to defeating Trump’s agenda—and it will be defeated—is the fearless organizing that Lupe and millions of others are leading throughout the country. When women, LGBT members, workers, communities of color, undocumented Americans, and Muslims come together, we are no longer “minorities” on the margins of society, easily picked off. We are, in fact, the vast majority of America, standing firmly against the agenda of a billionaire president and his cronies.

At tonight’s address to Congress, Trump doesn’t need to provide us with language that promotes unity. He’s already uniting us.