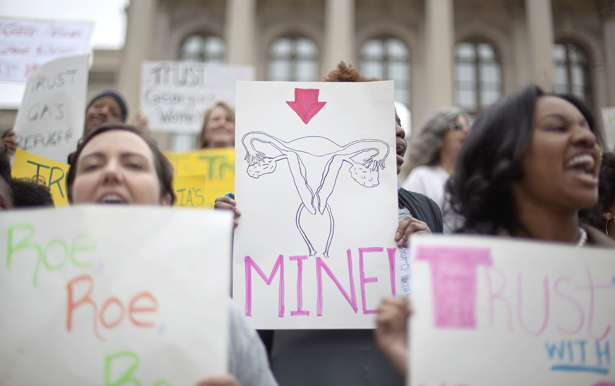 Women’s wombs are ground zero in the Washington’s culture wars, and the casualties are the communities that are systematically denied even the most basic forms of reproductive healthcare. The clash between science and religious zealotry exploded this year with the Hobby Lobby case, in which a company’s religious objection to IUD birth control led the Supreme Court to side with the employer and potentially impede contraceptive insurance coverage under the Affordable Care Act (ACA). At the same time, the highly effective IUD, along with similar hormonal implants are becoming widely available. The expansion of these contraceptive methods, collectively known as long-acting reversible contraceptives (LARC), could dramatically improve contraceptive care—if only politicians could stop panicking at the mere notion of women controlling their reproductive futures.

Compared to birth control pills, the IUD is far much more cost-effective and medically effective: according to the research group Guttmacher Institute, the rate of unintended pregnancy over one year on the pill is forty-five times greater than that on the IUD, a device that can last several years after insertion.

The ACA was supposed to expand access to LARC by ensuring coverage for a full range of birth control options. But the barriers of cost and lack of awareness still keep poor women from getting the best possible care.

Much of the problem comes from the entanglement of science with cultural warfare: IUD opponents erroneously believe it’s designed to terminate, rather than prevent, pregnancy, arguing that fertilization per se is the moment “when life begins.” Actually, the medical consensus is that pregnancy begins at implantation of a fertilized egg, but that has not stopped the Hobby Lobbyists from derailing the IUD policy discussion into another abortion battle.

Yet the real dilemma facing women and the IUD is a classic reproductive justice question—how to ensure choice, access and equity. As with many other social barriers to healthcare, these structural limitations acutely affect poor and marginalized women.

As Rachel Benson Gold writes in the Guttmacher Policy Review, “Starting an implant or IUD can cost a month’s salary for a woman working full time at minimum wage.” Additionally, healthcare providers often lack the “training and experience” needed to provide comprehensive LARC services. The devices can also be prohibitively costly for patients and providers.

However, although the science on LARC is straightforward, the politics of equal access, as Gold points out, is complicated by a history of reproductive injustice: while disadvantaged women have been economically deprived of access to contraception and abortion services, they were in the past systematically denied their right to independent reproductive and sexual decision-making, on their own terms.

Beyond the scaremongering myth that dominates reproductive health debates today, there is a very real history of coercion. In North Carolina, for example, eugenics-based state medical programs sterilized thousands of people, often young, poor women of color, without informed consent from the 1930s through the late 1970s. As recently as the 1990s, several states had policies linking welfare benefits to obtaining the hormonal contraceptive Norplant—effectively paying poor women to relinquish their ability to have children for years. Globally, the governments of China and India, among others, have used mass sterilization as a form of coercive population control.

That ugly history has led to the enactment of a number of safeguards on contraceptive care, which generally aim to ensure that women are comprehensively informed about the full range of contraceptive methods available, and that services are voluntary. But they have also led in some cases to tighter restrictions on publicly funded services, which raises the question of whether they go too far to protect women from coercion and end up overly restricting choice. For example, Medicaid rules impose a blanket ban on sterilization under age 21, but some advocates argue this measure “may block access to services for young people who freely and truly desire to terminate their childbearing ability,” Gold writes. Similarly, any policy that encourages or incentivizes any particular contraceptive method could have the effect of steering women’s decisions at the expense of independence of choice. When women are facing heavy economic and social pressures around childbearing, the reproductive health community has a responsibility to develop “the best way for practitioners to convey that some methods are more effective than others, while still ensuring that women are given the full information they need” to make the best personal decision.

Gold explains via e-mail that real informed consent hinges on mutual trust and autonomy: “patients must possess the capacity to make decisions about their care; their participation in these decisions must be voluntary and they must be provided adequate, appropriate information to make the decisions before them.”

On the ground, the implementation of Obamacare and other public health programs is still undermined by institutional barriers and lack of awareness. A report from the New York–based healthcare network IUD Task Force found widespread misperceptions: “A 2009-2010 study of office-based providers and Title X family planning providers found that 30 percent of those surveyed had misperceptions about the safety of the IUD” for women who had never borne children. Among young patients, about one in three “reported incorrectly that birth control pills were more effective than IUDs for preventing pregnancy.”

Meanwhile, advocates fear the Hobby Lobby decision might further narrow contraceptive coverage for working women (though the Obama administration is developing reforms to accomodate the ruling). And with the hobbling roll-out of Obamacare, some insurers are simply failing to offer coverage for the full range of contraceptive methods.

And the most pernicious barriers to reproductive choice aren’t merely about coverage but about profound racial and economic inequality. According to Guttmacher, “The number of women in need of contraceptive services and supplies increased 11 percent between 2000 and 2012,” with the rate of increase was even greater for publicly funded programs aimed at poorer women. Women of color generally suffer higher rates of uninsurance. Many immigrants face restrictions on Medicaid or are excluded from the ACA’s insurance provisions.

Reproductive rights are just one pillar of a woman’s ability to lead a full life and exercise essential human rights, whether she’s trying to finish college or to get an IUD. The polarization of the wealth gap between genders, institutionalized racism in the healthcare system, and a culture that systematically marginalizes women for seeking to claim full control over their bodies and sexuality—all are reproductive injustices. The tragedy that Hobby Lobby exposed is the distance between the conversation in Washington, fixated on litigating the politics of embryos, and the real debate on economic justice that we can’t have, because politicians are too busy dictating women’s lives to hear their voices.