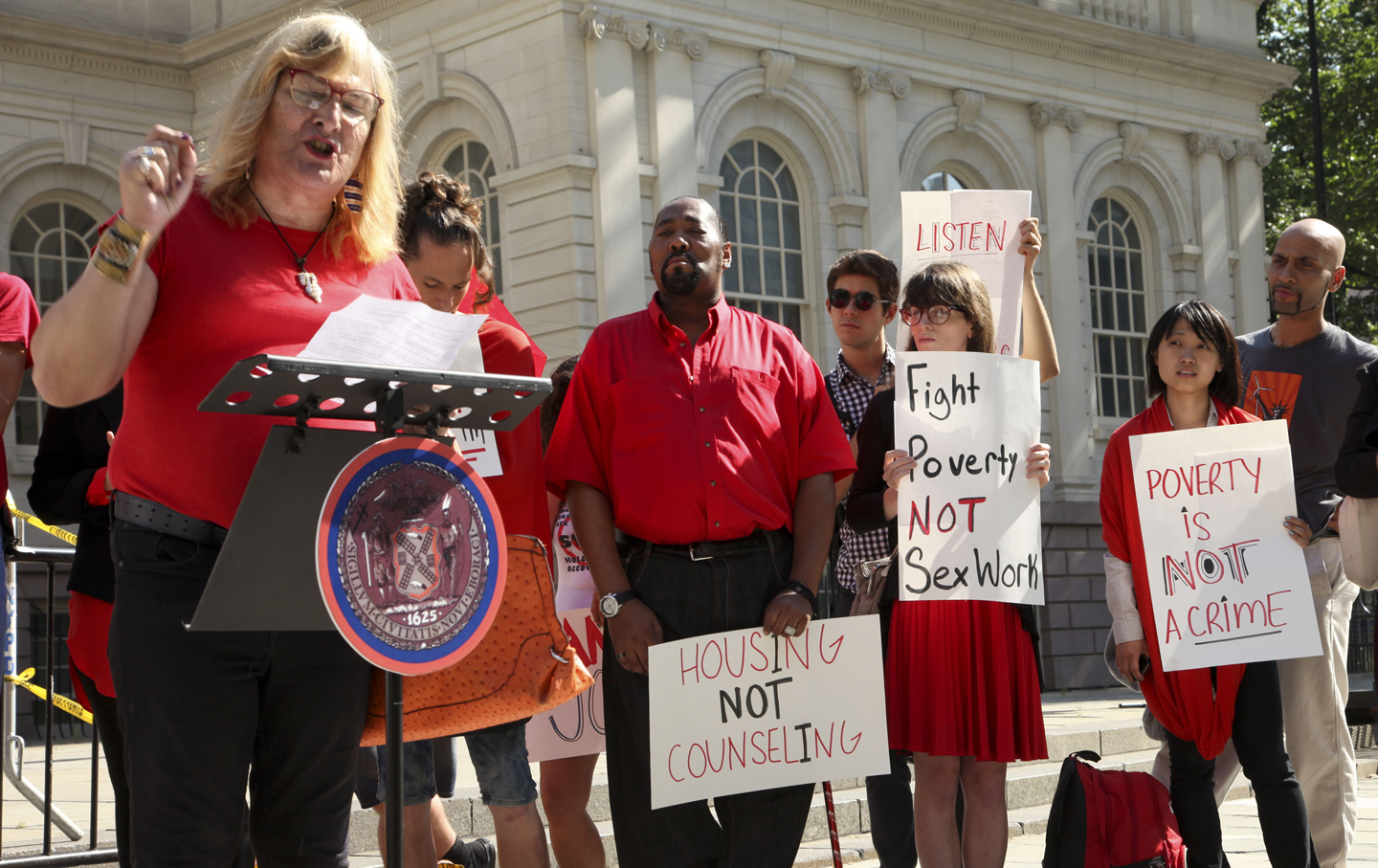 Jenna Torres was about to start college on the day she was arrested for prostitution. Then she became a criminal. The 17-year-old learned this after spending a day in jail and meeting with a lawyer who urged her to plead guilty and participate in the city’s Human Trafficking Intervention Court (HTIC) system.

As she recalled at a recent City Council hearing, “I never agreed to the things they charged me of, but they arrested me anyway.” And she agreed to cop a plea and attend court-mandated “treatment” sessions in exchange for having the charges dismissed. But the criminal procedure cost her more than she imagined.

After cycling through holdings, which left her hospitalized with a urinary-tract infection that Torres attributes to the unsanitary facilities, she wended her way through a few weeks of mandatory counseling sessions. Torres would have far preferred freshman courses to the perfunctory talk therapy, but, ironically, that was made nearly impossible by her court intervention. She scrambled between court dates and counseling sessions, she recalled, knowing that “If I went to school and not do the programs, they would arrest me.”

On top of court appointments in Harlem and classes in Staten Island, Torres was raising an infant in Brooklyn, struggling as a single mother to cope with his health problems following a premature birth. “If I go to the court, and not deal with my son,” she recalled in a follow-up interview, “my son’s going to be even more sick than he was when I left.” By the time she “graduated” from the program, she had dropped school. “It’s ridiculous, because the things that they have put in place to help you kind of collide with each other,” she says.

According to the peer-led sex workers’ advocacy group Red Umbrella Project, the city’s scheme to divert sex workers from the criminal-justice system has often further criminalized them, by treating all people arrested for prostitution as one-dimensional victims—presuming that they are undeserving or incapable of asserting power or self-determination over their labor or their bodies.

The city runs five anti-trafficking courts, part of a statewide network of 11 such courts that handle about 90 percent of prostitution-related criminal cases. Guided by recently passed state legislation aimed at criminalizing sex trafficking and rehabilitating child victims, the courts are designed, according to a City Council committee report, to route the participants into “services that will assist in pursuing productive lives, rather than sending victims back into the grip of their abusers” and “to promote a just and compassionate resolution to the victims of sex trafficking.” Upon completion, participants’ criminal records can be scrubbed, if they stay arrest-free for six months.

To Council Member Rory Lancman, chair of the Courts & Legal Services Committee, the “working assumption,” is that “every person who is working as a prostitute should get out of that life.” Under that rationale, “If someone commits a crime, they’ve got to pay the consequences.… And here we’re offering a very, very attractive alternative [to] going to jail. And I think [despite] the fact that that alternative is mandatory—it’s still a pretty good deal.”

Margaret Martin, an attorney who works with the policy and planning wing of the state’s Office of Court Administration, tells The Nation that since participants are unlikely to be readily identified as trafficking victims in court and face complex social barriers in pushing them toward services, “the mandate is overall a positive thing in the lives of the participants in these courts.” Under current law, which categorically criminalizes sex work, she says, “This is an imperfect solution…. We’re acknowledging the fact that the large majority of these women are human trafficking victims, crime victims themselves, and therefore need to be treated as such.”

While HTICs purport to “creatively” divert people from jail, the testimony of Stacy—a married mother and Red Umbrella Project activist who was arrested in Brooklyn while walking to get food at a neighborhood deli—shows how criminalization-based policy regimes can drive people into the system, not deter them:

I was told take the deal or I’d face jail time based on my 15-year old history of prostitution arrests as a minor, when I was a victim of human trafficking as defined under Federal Law.… [The counseling sessions] were an invasion of my life and time, especially considering I was not offered job training, financial aid application/tuition/grant assistance for college, housing assistance, or any other meaningful services.

While RedUP’s founding principle is full decriminalization of sex work, the group says HITCs can be reformed immediately to protect participants’ human rights. It recommends establishing an independent oversight committee, with representation from people who have been through the system; and following the council’s recently approved funding boost for court-mandated services, RedUP wants the program restructured to prioritize “economic empowerment through job training assistance and educational opportunities,” while making other social services, especially trauma-based psychotherapy, voluntary.

Citing research and interviews on hundreds of HTIC cases in 2013 and 2014, RedUP director Audacia Ray says via e-mail, “The reason most people we work with are in the sex industry is because of economic insecurity, and therapy does nothing to help with that. Sex work isn’t a moral issue, it’s an economic one.”

Torres, now 20, ultimately connected with RedUP through the Legal Aid Society. There, instead of court orders, she got voluntary job-training assistance and engaged with a growing sex worker activist community. Reflecting on her court experience, she testified, “I didn’t need to be treated for sex work; that isn’t an illness.”

What if she had encountered a RedUP outreach worker instead of a cop, on that fateful day three years ago? Maybe she would have found a more dignified pathway to “justice and compassion”—not through a judge’s order, but through a peer asking her what she really needed.