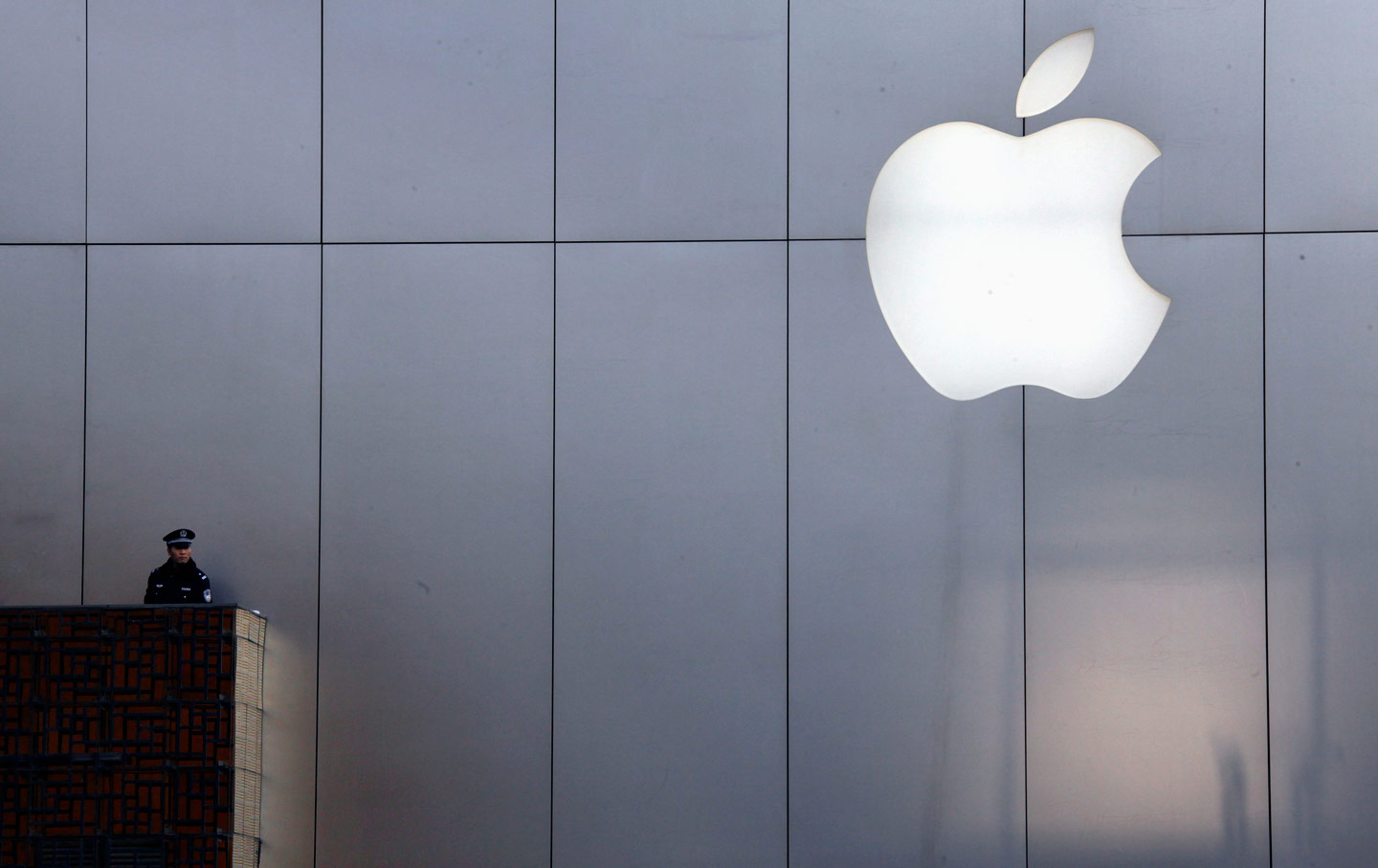 A policeman looks out from a balcony in front of an Apple store in Beijing. (Reuters / David Gray)

I am a lifelong civil libertarian. I think Edward Snowden is a national hero who should get the Medal of Freedom. As a reporter, I covered government spying and abuses of surveillance by the FBI and other agencies. I believe privacy and the rule of law are at the heart of any sensible civil society.

But for those very reasons, I am, heretically, deeply alarmed by Apple’s refusal to cooperate with federal investigators seeking to decrypt the San Bernardino shooter’s iPhone. Far from serving civil liberties and the public interest, Apple’s stance undermines corporate accountability and civil rights, and could damage a wide range of progressive reform movements, from environmentalism to #BlackLivesMatter. In a real way, Apple’s libertarian grandstanding is as corrosive to civic values and American democracy as Donald Trump.

Look at it this way. I am writing—on a MacBook—in my university office at a desk with three locked drawers. In those three drawers reside all sorts of confidential files. Personnel files of my academic center’s staff. Communications from and about students. Finance reports. Not to mention research files on stories, interview notes, manuscripts. All securely locked—in some cases, as a legal requirement.

Reasonable searches and seizures are one of the fundamental elements of any democratic justice system.

But suppose I get caught engaging in a criminal conspiracy. Maybe I’m scheming with some gun-obsessed racist militia to shoot up the campus. Maybe I’m being paid by a mobbed-up trash hauler to steer a university contract. Regardless, the first thing investigators will do when they catch a hint of my crime will be to secure a warrant from a judge, walk into my office and drill open my locked filing cabinet. And not one person reading these words would argue that the government is invading my privacy. Reasonable searches and seizures—approved by judges, transparently spelled out in warrants, subject to challenge by lawyers—are one of the fundamental elements of any democratic justice system.

But what about my smartphone, the most efficient filing cabinet ever devised? Under Apple’s reasoning, all I need to do is keep every incriminating communication and document on my smartphone’s encrypted chip, and my records will be forever immune from inquiry. In many cases, the simple existence of crucial communications or documents will remain unknown and unknowable. In others, investigators may suspect there’s a relevant document, and a judge may demand that I unlock my own phone. But if I’m any kind of a conspirator, I’d certainly risk contempt of court for refusing to comply rather than serve decades in prison for the crime I actually committed, but which could only be proved with the documents and footprints stored on my iPhone.

Now imagine that instead of being a lowly journalist and university functionary, I am a Chicago Police Department officer—the commander, let’s say, of that secret squad that routinely tortured suspects in a West Side warehouse until it was outed by investigative reporters last year. With truly unbreakable encryption, all I need to do is keep all our squad notes and communications on cellphones—a silicon wall of silence. Without that evidence, it would be so much harder to make civil-rights charges stick.

Or let’s say I’m an oil executive, trying to protect my company from criminal liability in a massive oil spill. Under Apple’s no-exceptions encryption regime, records and communications about these legal end runs will be forever beyond reach of a meaningful investigation, whether by prosecutors, journalists, or Congress. In fact, we may never know this crucial evidence exists.

None of this is to diminish the central importance of mobile-device privacy. But fetishizing encryption for its own sake ignores the central role of transparency and documentation in civil rights and progressive reform, both in the United States and worldwide. With corporations, governments, and criminals alike keen to shield their actions from scrutiny, it is often only the judicial system’s ability to compel disclosure of records in criminal and civil cases, against great resistance, that offers a chance of accountability for abuses of power and denial of fundamental equality.

If encrypted phone records are beyond judicial or investigative reach, checks and balances could be thrown out of kilter.

If encrypted phone records are really completely beyond any judicial or investigative reach, the basic system of democratic checks and balances could be thrown badly out of kilter. Document dumps from legal cases are the lifeblood of investigative journalism, as this year’s Academy Award–winning film Spotlight amply illustrates—imagine all of those archdiocesan records about sexual predator priests stored on unbreakably encrypted cellphones. Consumer advocates, environmentalists, and trial lawyers all rely on legally extracted documentation to hold corporations to account. And whether it is sex discrimination, the trafficking of women, subprime mortgages, or denial of voting rights, hardworking prosecutors rely on their ability to compel disclosure of incriminating documents showing patterns and practices of criminality and abuse.

Don’t be distracted by endless arguments about encryption technology and back doors. The overriding question posed by the Apple case is simple: Since when does a single company get to write the rules for transparency and availability of individual, government, and corporate records? Since when does a single corporation get to decide which records and data are beyond reach of warrant or subpoena?

Let’s return for a minute to the case that started the Apple row: the horrific San Bernardino massacre. In that case, there are 14 corpses and 22 wounded, dozens of traumatized witnesses, and the grieving families who deserve facts and justice. And in that case, the phone’s actual owner—the government of San Bernardino County—is more than willing to have the phone decrypted. Federal investigators, for their part, are not actually seeking a master key to all encrypted phones. The FBI is asking Apple’s engineers to alter a bit of code on a single device so the feds’ tech whizzes can try endless password variants without the phone wiping its data clean.

The bar for breaking into a phone should ideed be high—but it should be set by judges and lawmakers, not executives.

Any responsible civil libertarian ought to see the real and substantial public interest in a thorough investigation of the San Bernardino case. If the two dead killers acted alone, we need to know that, to squelch facile claims of international terrorism. If in fact they had help from overseas actors, we need to know that too, in order to bring coconspirators to justice and to gauge an appropriate law enforcement response that doesn’t overreach.

Apple claims it is taking a brave stand in defense of privacy: The company argues that any code opening the shooter’s phone in San Bernardino will, sooner or later, end up in the hands of hackers, the Chinese government, and assorted bad actors around the world. That may be a real risk. All sorts of surveillance and data technology gets abused: by governments, corporations, and criminals alike. But the answer cannot be an encryption regime that forever shields those in power from legal accountability. And the answer is not to leave it in Apple’s hands to decide when the situation is finally grave enough to insert that bit of code. The bar for breaking into a phone should indeed be high—but it should be established by judges and lawmakers, not self-interested executives.

Apple’s refusal to help the San Bernardino investigation thrills corporate boardrooms just as much as Donald Trump’s championing of a wall on the Mexico border thrills nativists and antigovernment fanatics. Different though their audiences may seem, both Trump and Apple are advancing their brands by making emotional appeals to fear—Trump to fear of Muslims and Mexicans, Apple to fear of hacking.

But fear isn’t the answer to the San Bernardino dilemma, any more than it is to immigration. The only answer, which Apple has evaded as steadfastly as Trump has, is to embrace the Bill of Rights, with its careful, essential balance of the right to privacy with transparent judicial oversight of searches when individuals or corporations violate the social compact. And the way to protect American companies from snooping by competing nations isn’t to insulate corporations from our own courts and investigators; it’s to fight for a worldwide culture of civil liberties, the rule of law, and freedom of information.

Sooner or later, Trump’s strident promotion of bigotry will run up against the Constitution. Deporting Muslims and walling off the border will be exposed as unconstitutional fantasies. But if Apple gets its way, corporations and criminals alike will see their own fantasies of a wall insulating them from law and accountability become real, permanent, and impenetrable. This can’t happen.