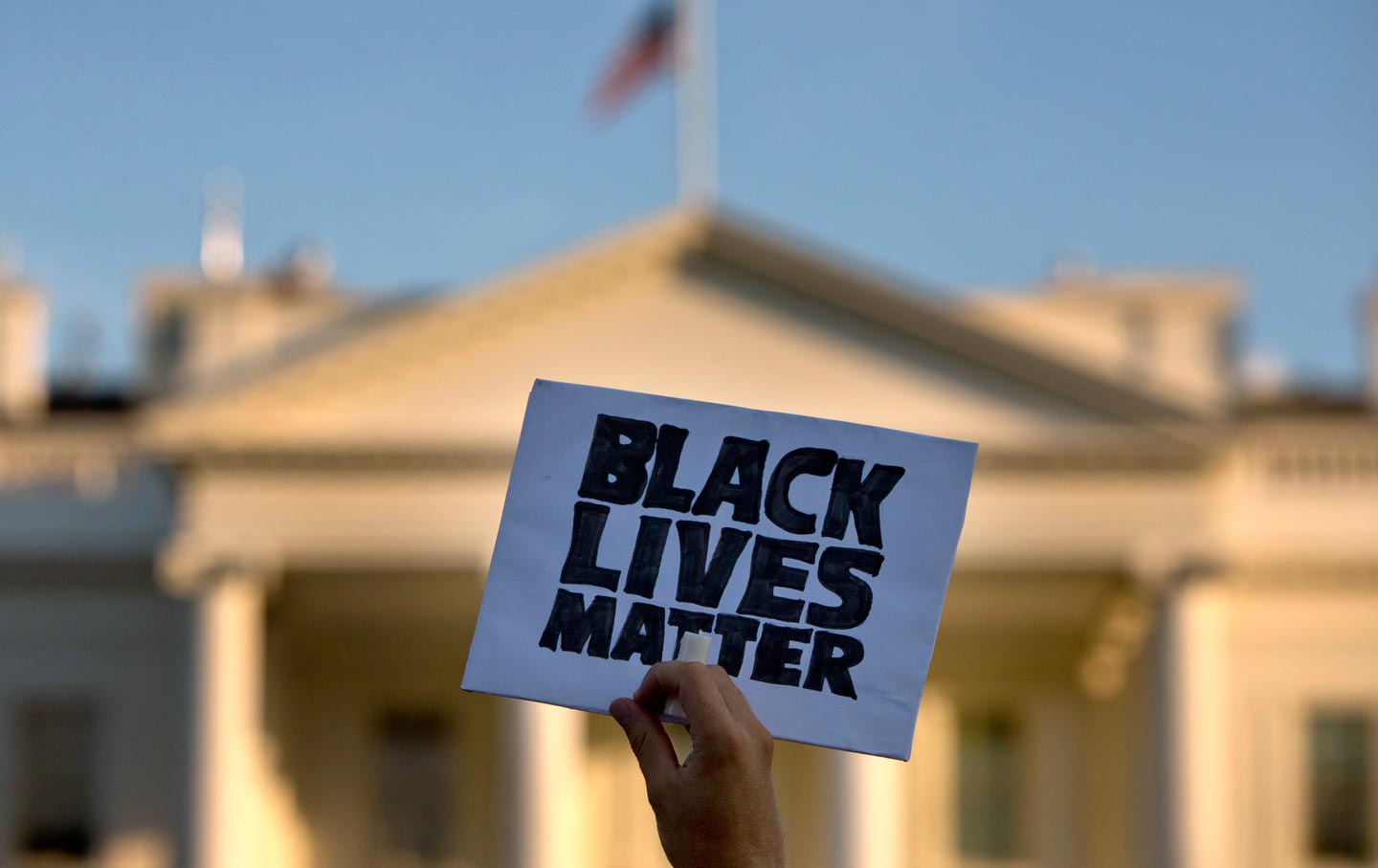 A demonstrator holds up a sign during a July 8, 2016, protest outside the White House. (AP Photo / Jacquelyn Martin)

A full year before the Civil Rights Act of 1964 was passed, more than 60 percent of white Americans polled believed that blacks were treated “the same as whites” in their communities. The assessment is, of course, ridiculous on its face. It suggests either ignorance of the facts or outright denial on the part of the respondents. It also suggests an inconvenient but persistent truth about race in America, that the majority of white Americans aren’t reliable sources on the subject.

The Coming War on ‘Black Nationalists’

The clarity of hindsight makes public opinion polling from the civil-rights era helpful in measuring the gulf that existed between white Americans and racial realities of the 1960s. That gulf endures, however. It’s exposed by current polling data, is perceived by a great many black Americans, and necessitates a movement that aims to make “black lives matter” an uncontroversial statement. Frustratingly, though, the gulf still seems invisible to the majority of white Americans who are either blind to the facts of life in America for people of color, or are bound by ideology to reject it.

As a nation, we now honor Martin Luther King Jr. as a model for political activism. Along with acknowledging heroes like King, we also tend to agree on the villains of that time: the Ku Klux Klan, Bull Connor, and George Wallace. And with clear eyes, we point to the ills of the period: state-sanctioned segregation, voter disenfranchisement, and discrimination in public services. The near-consensus of the present moment wasn’t always the case, however, and further exploration of historical trends highlights just how far the majority of white Americans were on the wrong side of history during the civil-rights era.

A 1964 New York Times poll of New Yorkers found that 54 percent believed the civil-rights movement was moving too fast in its calls for voting rights and an end to discrimination in public accommodations. Eighty percent said they were opposed to school-integration plans and almost half said that nonviolent demonstrations had hurt the “Negro cause.” Just as telling, two years after King delivered his “I Have A Dream” speech and three years before his assassination, half of whites said in a Harris poll that King was hurting “the fight for Negro rights.” Fourteen percent weren’t sure whether he was or not.

Polling on race relations today mirrors the trends of the civil-rights era, with double-digit gulfs between blacks and whites on many issues that relate to race. A New York Times poll released Wednesday found that the majority of both white and black Americans agree that race relations are bad in America, at their lowest point since the Los Angeles riots of 1992. That’s pretty much where white and black opinions diverge. According to the same poll, 56 percent of whites say that the race of a suspect makes no difference in a police officer’s decision to use deadly force. A Pew poll last month found that 41 percent, a plurality, of whites also believes there is too much focus on race and racial issues. In addition, about seven in 10 whites expressed a great deal or fair amount of confidence in local police to treat blacks and whites equally, and 56 percent told Huffington Post/YouGov pollsters, “Racism isn’t really an issue in my community.”

These opinions boggle the mind, given the body of evidence that has been presented: academic research, editorials, testimony, government reports—not to mention what seems to be an endless loop of footage showing black Americans killed by police after being stopped under dubious circumstances. Still, somehow white Americans are able to hold on to their high opinion of the police, the job cops perform in communities of color, and, as it was with the civil-rights movement, their low opinion of black protest.

In the days since the killing of Philando Castile, Alton Sterling, and five police officers in Dallas, former New York City mayor Rudy Giuliani has reemerged as a leading white voice on the issue of race in America. The man dubbed “America’s mayor” and who was, at one time, in charge of the largest police force in the country, the NYPD, ended a weekend of comments with an appearance on CBS’s Face The Nation. Giuliani’s insights during that appearance included his opinion that the phrase “black lives matter” is “inherently racist” and “anti-American” and that black children have “a 99 percent chance” of killing each other. Op-ed pages across the country, including The New York Times, lambasted Giuliani for the statements, but polling suggests he was speaking for a large swath of white Americans.

In keeping with Giuliani’s rant, 71 percent of white respondents say intracommunal violence is a bigger problem for black Americans than racial justice in the criminal-justice system—a belief no doubt fueled by white misperception that violent crime is up in America (it’s been on the decline for 20 years) and severe overestimation of just how much blacks are involved in it. To be fair, quite unlike Giuliani, 53 percent of white Americans say they support the Black Lives Matter movement, through a Rasmussen poll found that only 9 percent of them say the phrase “black lives matter” fits their personal views.

In a speech addressing the most recent spate of tragedies involving police and black men, presidential candidate Hillary Clinton called for a national “conversation” on race. The recommendation echoes that of her husband nearly two decades ago when he was president. On Thursday, President Obama attempted to broach that conversation with a televised town hall–style meeting.

“I’ll be honest with you,” Obama said during the event. “It’s going to require all of us not to close ourselves off and go to corners but rather require us to come together and listen to each other.”

Conversation is great, but history suggests the problem isn’t that we’re not talking about race; it’s that the majority of white Americans aren’t listening.