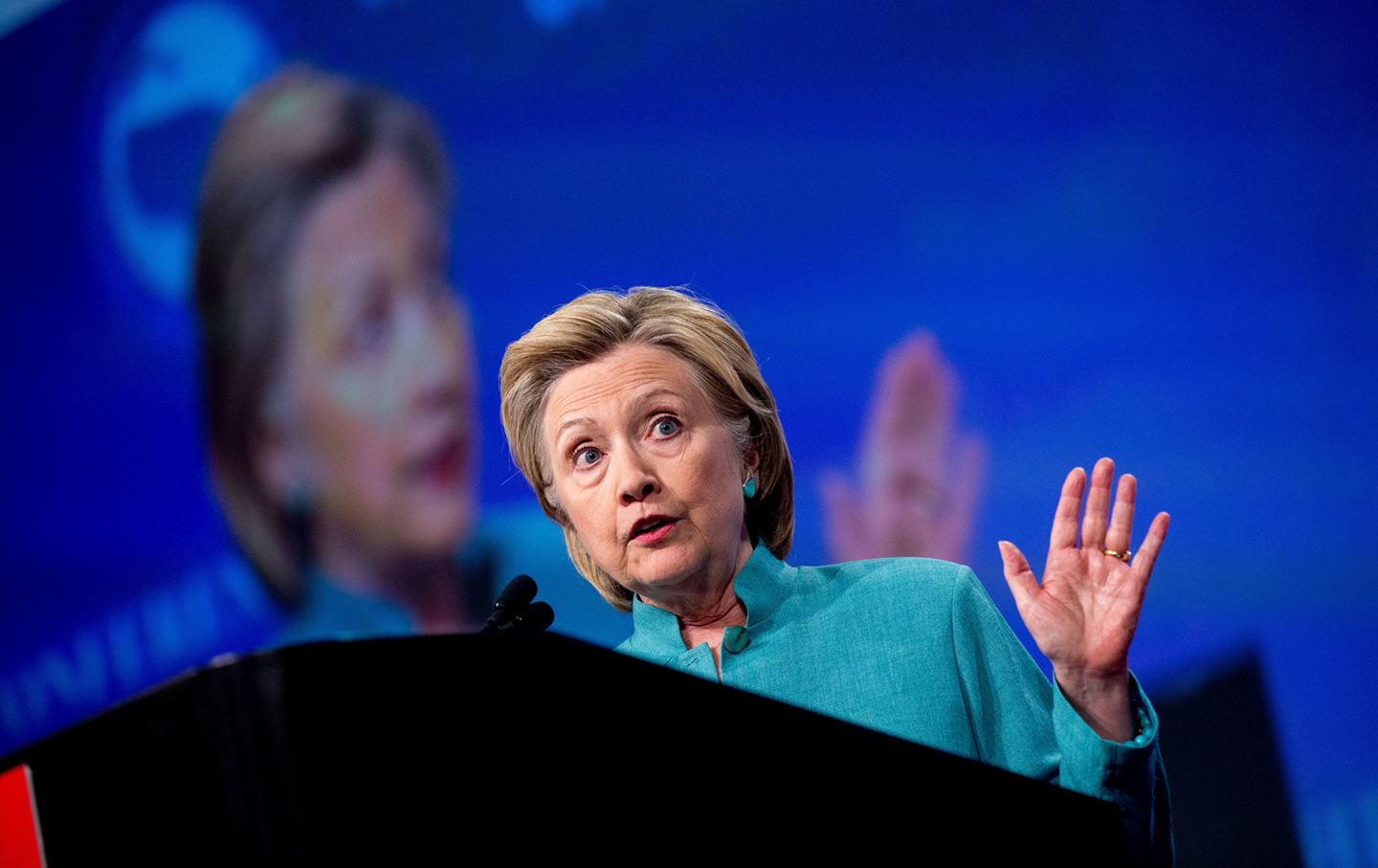 Hillary Clinton speaks at the US Conference of Mayors in Indianapolis, on Sunday, June 26, 2016. (AP Photo / Andrew Harnik)

Plenty of Americans are unsettled about Britain’s vote to exit the European Union. And a lot of what unsettles them is Donald Trump’s claim that the Brexit vote sets the stage for a similar reaction against elite political and economic arrangements in the United States.

Trump’s a blowhard, and an opportunist. But the angst and agitation about the Brexit vote, and about Trump’s statements regarding it, are appropriate. Britain’s 52-48 vote for the Brexit option confirms that millions of voters in Western democracies are so frustrated with politics as usual that they are ready to embrace extreme options. Some of them are responding to crude xenophobia and racism. But the voting patterns in Britain, like the polls from battleground states in America, suggest that there are other factors in play. One of these factors is a deep frustration on the part of working-class voters with economic globalization schemes. And Trump is speaking to them when he criticizes trade deals and outsourcing—even if his language is that of a frequently cynical and absurdly inconsistent “billionaire populist.”

Any answer to Trump should include a pushback against the lies he tells, which are strikingly similar to the lies that the more nefarious of the Leave campaigners told before the Brexit vote last Thursday. Hillary Clinton’s campaign is using Trump’s unsettlingly bizarre response to the vote—made as he was celebrating snack-bar options at his golf resort in Scotland—to stir further doubts about the faux populism of a man who has never been on the same side of any issue for long.

Congressman Keith Ellison wanted Democrats to take a strong stand against the TPP. That has not happened—yet.

While a substantial portion of British voters blamed the European Union for the misery of austerity and deindustrialization, a substantial number of American voters blame the misery of austerity and deindustrialization on free-trade deals like the North American Free Trade Agreement, permanent normalization of trade relations with China, and the proposed Trans-Pacific Partnership deal. There is broad agreement with the assessment of groups such as Public Citizen’s Global Trade Watch and the Citizen Trade Campaign, which have explained that corporate-friendly free-trade deals have harmed workers, farmers, small-business owners, communities, and the environment. This is one of the reasons TPP-critic Bernie Sanders ran so well in the Democratic primaries, and Clinton (who once praised the TPP) now says she is opposed to the agreement.

The shared anti-TPP stance of the two Democratic contenders led to speculation that the Democratic platform, as drafted by a 15-member committee made up of Clinton backers, Sanders backers,and others, might formally line up the party in opposition to the agreement.

When the platform-drafting committee took up the issue in St. Louis last week, Congressman Keith Ellison, the Minnesota Democrat who serves as a cochair of the Congressional Progressive Caucus, proposed to add language rejecting the trade deal. But the proposal was defeated, after Clinton-allied drafting committee members said they did not want to go on record against a deal that has been backed by President Obama.

Ellison, who was one of Obama’s first backers when he ran for the presidency in 2008, says, “I am disappointed that my amendment to take a strong stand against the Trans-Pacific Partnership—a position shared by both Secretary Clinton and Senator Sanders—was not included.” The congressman argues that it is vital to take a strong stand against the TPP, and he is encouraging the full platform committee to adopt his anti-TPP amendment when it meets in July.

﻿In light of the Brexit vote, the character and the quality of the Democratic response to Trump becomes critical.

That argument should be strengthened by reflection on the news from Britain.

The Brexit vote is just the latest signal that voters have not just soured on the rough mix of globalization, deindustrialization, and austerity that can be traced back to Margaret Thatcher in Britain and Ronald Reagan in the United States; they are now casting votes based on that opposition. Wealth has been redistributed upward, wages have stagnated, inequality has accelerated. And voters are saying “stop.” They are not doing so only in Britain. In the United States, opposition to failed trade policies in general, and to the TPP in particular, played a critical role in helping Sanders secure big victories in Wisconsin, Michigan, Indiana, and other states where he was able to focus the debate of economic fundamentals. Clinton has recognized this and spoken with increasingly specificity about her opposition to the TPP—going so far as to declare her disapproval of proposals to organize a post-election vote on the measure by a lame-duck Congress. “I oppose the TPP agreement—and that means before and after the election,” she declared in May.

“It is hard for me to understand why Secretary Clinton’s delegates won’t stand behind Secretary Clinton’s positions in the party’s platform,” says Sanders, who has said he will vote for Clinton in her race with Trump but argues that the platform must be strengthened in order to better position Clinton to beat the presumptive Republican nominee.

“That is the process we are engaged in right now. We’re working on the Democratic platform. We are talking to the Clinton campaign,” Sanders said on CNN Sunday. “And I hope very much that Secretary Clinton understands that not only is it good public policy, it’s the right thing to do; it is good politics to begin to move in that direction.”

In light of the Brexit vote, the character and the quality of the Democratic response to Trump and Trumpism becomes all the more critical.

Trump’s stances on trade policy and the challenges that arise in an era of globalization are rooted in empty-headed and often ugly nationalism. Democrats must offer a clear, coherent alternative that recognizes the failures of the past (NAFTA), that commits to avoiding new failures (TPP), and that frames out a vision for the future that repudiates both crude nationalism and crude corporatism. Democrats can engage and inspire voters with an honest rejection of race-to-the-bottom free-trade arrangements and, instead, embraces a new fair-trade ethic that strives to improve the condition of workers and communities, of the environment and human rights, of democracy itself, in the United States and around the world