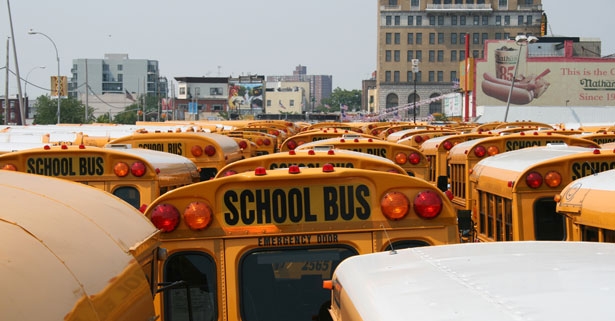 A month out from the midterm elections, Republican candidates around the country are confronting a shared, and significant, vulnerability: education.

The conservative wave of 2010 allowed Republicans to implement slash-and-burn governance in several states—what Kansas Governor Sam Brownback called a “real live experiment” in tax cuts for corporate interests and cuts to services for everyone else. One of the most devastating casualties was public schools and universities.

Now, several Republicans could fall victim to their own experiment. Conservatives are on the defensive in Kansas, North Carolina, Michigan, Colorado, Pennsylvania, Florida and Wisconsin over their records on education. The issue features prominently not only in local and gubernatorial campaigns but also in Senate races that many predicted would be referenda on Barack Obama, not on conservative governance at the state level.

Sweeping budget cuts have created “a perfect storm that’s put education at front and center at every level of every office,” said Karen White, political director for the National Education Association, the country’s largest teachers union. “It’s really taken a couple of years for these cuts to reach down to the individual level, but that’s now happened.”

In states like Kansas, where 95 percent of children attend public schools, education affects a broad swath of voters. Even in that reddest of red states, the cuts championed by Governor Sam Brownback have alienated many of his former supporters. For their part, Democrats are leveraging education to engage key slices of their own electorate in states like North Carolina, particularly women and minority voters. “People are really using the issue of education to talk specifically to drop-off voters,” White noted.

The NEA plans to spend as much as $60 million this year, with more than 70 percent devoted state-level races. White said that many of NEA’s 3 million members will also be personally involved in their local races, making phone calls and sending handwritten postcards. The second-largest teachers union, the American Federation of Teachers, plans to spend more than $20 million, a record amount even when considering presidential election years. AFT will spend most of its money trying to defend Senate Democrats and flip governor’s seats in states where education cuts have been particularly harsh.

Polls in several states show education as a top-tier issue. One of those is Pennsylvania, where Governor Tom Corbett reduced public school funding by $900 million, or 10 precent, in 2011. Those cuts, plus more the next year, had a sweeping effect: thousands of teachers were laid off, while 70 percent of Pennsylvania’s school districts increased class sizes, 40 percent cut extracurricular activities and 75 percent were forced to cut instruction in 2013. Democratic candidate Tom Wolf has hammered Corbett over the state of Pennsylvania’s schools, and Corbett is now losing by about seventeen points. The implosion of his campaign isn’t enough to stop Corbett from attacking the state’s teachers, however. Just days ago, the School Reform Commission—appointed by Corbett—abruptly canceled the contract with Philadelphia’s teachers in an attempt to force concessions from the union.

“I’ve never seen this level of anger about what policymakers have done in some places to our schools,” said AFT President Randi Weingarten. Weingarten thinks it’s not only underfunding that’s made education a top-tier issue but also the effect of efforts to privatize public education. “The market-based reforms, the top-down reforms, the testing and sanctioning as opposed to supporting and improving has taken hold so much and has been so wrong-headed that you’re seeing this fight back,” she said.

Education cuts in states like Pennsylvania disproportionately affected minority and low-income students, who have long born the brunt of disinvestment in public schools. Even so, cutbacks were deep enough to force voters in wealthier suburban districts where schools are usually well-funded to take note, said Pedro Noguera, a sociologist at New York University. (Noguera is also a member of The Nation’s editorial board.) That may explain why the issue is resonating so widely.

Other close gubernatorial races in which education features prominently include Florida, where Republican Rick Scott “has all but ignored the state’s constitutional duty to provide uniform, high-quality and free public schools,” the Tampa Bay Times wrote in a scathing editorial. In Wisconsin, Madison school board member Mary Burke has drawn sharp distinctions between her support for public schools and the state’s higher education system, and incumbent Scott Walker’s aggressive promotion of vouchers and budget cuts.

In Texas, Greg Abbott is defending $5.4 billion in cuts to public schools, while Wendy Davis says she would increase funding. Polling puts education at the top of the list of voters’ concerns in the state, and for good reason. A state judge ruled in August that Texas has “failed to meet its constitutional duty to suitably provide for Texas public schools.” Abbot, who currently serves as the state attorney general, appealed the ruling. The Democratic candidate for lieutenant governor, Leticia Van de Putte, is also running hard on support for public education against an opponent who champions high-stakes testing. “If education isn’t your priority, you’re not prepared to lead Texas,” Van de Putte says in one ad.

The Republican and Democratic candidates for governor in Arkansas are both highlighting their education platforms. Democrat Mike Ross has said he wants to be the “education governor.” Republican Asa Hutchinson ran an ad that focused on his plan for statewide computer science curriculum, and he’s talked of boosting support for early childhood education.

Democrats running for Senate in red and purple states are also picking on education to highlight the impact of Republican policies. In Georgia, Democrat Michelle Nunn warned recently that her opponent’s plan to abolish the Department of Education would hurt the middle class and “eradicate” federal assistance for Georgia’s college students.

No Senate candidate is as focused on education as North Carolina’s Kay Kagan. Over the course of a debate on Tuesday night, Hagan said four times that her opponent, Tom Tillis, “gutted education” when he was the top Republican in the state house. Hagan’s campaign and several outside groups supporting her have made public school cutbacks a centerpiece of a number of ads.

Education is a flashpoint in Colorado, where a county school board that was essentially bought by the Koch brothers in 2012 recently tried to censor AP US history in order to teach the “benefits of the free enterprise system, respect for authority and respect for individual rights,” while skirting civil disobedience. Protests erupted in the Denver suburb, which happens to be a swing county that could decide the fate of Colorado’s two vulnerable Democratic incumbents, Senator Mark Udall and Governor John Hickenlooper. Both said they disagreed with the school board’s proposal. Udall’s opponent Cory Gardner, meanwhile, declined to weigh in.

Education is also a hot issue in local elections, where some races are attracting a flood of big money. More than a quarter of a million dollars has poured into the contest for five seats on Minneapolis’s school board, for example. Some of these races, like the one for California school superintendent, are not laid out along a Republican and Democratic axis but are instead contests between corporate “reformers” and allies of traditional public schools and teachers unions. Still, they illustrate the political impacts of widening concern over the state of public education.

“We’re watching people starting to focus on schools and public education,” Weingarten said. “We’re seeing the effect of the starving of schools, the relentless criticizing of them, and the fixation on testing. So we’re seeing in lots of these state races, a conversation about education.”