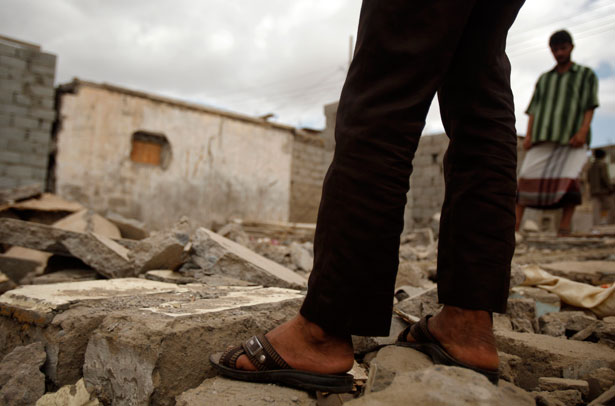 The aftermath of a drone strike in Yemen (Reuters/Khaled Abdullah)

"How We Read a NYTimes Piece on Drone Strikes in Yemen," by Ryan Goodman and Sarah Knuckey. Just Security, April 23, 2014.

On April 21, The New York Times reported that a US drone strike in Yemen had killed more than three dozen people. The following day, Sarah Knuckey and Ryan Goodman—both NYU law professors and experts on drone policy and humanitarian law—posted this line-by-line annotation of the Times piece, providing the absent context for the story's revelations. Embedded within the bland officialese parroted by the Times, their footnotes reveal a deeply troubling story about the shifting and contested landscape of US drone policy and identify the insidious lacunae in mainstream reporting on the drone program.

“#Weareallmonkeys: Can a picture of a banana fight racism?” by Jude Wanga. The Independent, April 29, 2014.

This past week, European soccer saw a large, Internet-based movement to challenge racism in stadiums. It was all started when a banana—the hackneyed weapon of choice for racists at European soccer matches—was thrown at Barcelona player Dani Alves. Without missing a beat, Alves picked up the banana and ate it while simultaneously taking a corner kick, sparking a Twitter/Instagram/Facebook phenomenon: #Weareallmonkeys. Players, politicians and fans began posting pictures of themselves eating bananas, saying #NoToRacism and insisting that "hey, we are all primates!" However, freelance journalist Jude Wanga is uncomfortable with the movement. For starters, many of those posting pictures are white fans and politicians who will never be called monkeys by anyone. Furthermore, the involvement of players like Liverpool's Luis Suarez, who was previously banned for racially abusing a black player, highlights the shortcomings of what Wanga calls "a beautiful but flawed gesture" of solidarity. There are far better ways to solve soccer's racism: imposing fines on guilty clubs, forcing teams to play to empty stadiums, deducting points from teams or simply funding efforts to combat racism. Currently, England's Premier League gives a mere pittance to its antiracism group Kick It Out—0.000018 of its £5.5 billion pound broadcast rights. Rhetoric and humorous photos, while fun, are not enough.

Hair is political, too. From a well-meaning afro-pat ("I love your hair!") to the silent judgment of the boss of a bedreaded worker, black hair is subject to constant social regulation, and with it, discrimination. On March 31 the US Army released an updated grooming policy that is blind to real, physical differences stemming from race. Try gathering thick, outward-growing hair into a bun, or worse, cutting it with regard to some definition of "shoulder-length." I don't think so—and twists and braids are not permitted. The New York Times writes, "While the Army certainly isn’t the first to impose these kinds of prohibitions, it may be the most egregious example, considering that the 26,000 black women affected by AR 670-1 are willing to die for their country." Over 17,000 people signed a petition (no longer available) submitted to WhiteHouse.gov asking for a policy review, and prospects are looking good.

When the Cliven Bundys of the world speak out against federal law, discourse on local control is prone to simplify. “They’re all racist.” Keeler's piece (re-published on TheNation.com) challenges such narrow assumptions. In it she lays out a legal—and moral—argument for why the native Shoshone are the rightful protectors of the land Bundy lays claim to. In her schooling of Bundy, she elegantly profiles the Cowboy Indian Alliance and its alternate vision for the nation and its law.

When I lived in Cambodia, I was surprised by the journalistic quality of Voice of America's local coverage, given its ostentatious name and origins as a US propaganda tool. In fact, because VOA's reporters weren't writing for international audiences who had minimal knowledge of Phnom Penh's goings on, but rather largely for Cambodians, their stories often had more depth than those of the major independent wire agencies. At the same time, the VOA guys had more clout and thus access than reporters from the many local papers. VOA's coverage doesn't necessarily seem so balanced in other parts of the world, and government-backed journalism may never be free of suspicion. Still, it's noteworthy that Congress is now considering a bill to redefine VOA's role and that of other BBG programming as more explicitly propagandistic, to the detriment of journalistic independence.

Let us rewind to Darfur in the mid-eighties. A generations-long arrangement between land-owning farmers and nomadic camel herders, in which farmers set aside grazing land for herders, is about to end. The nomads are Muslim and the farmers are animist, but neither ethnicity nor religion is the culprit. It is drought. The ensuing desertification and strain on resources will make it impossible for the land to sustain both groups. Sudanese leaders will exploit this fight over resources and fashion it into the ethnic conflict through which we understand Darfur today. Keep this in mind as South Sudan's current unraveling is examined under those same terms. In her recent warnings about the state of the country, High Commissioner for Human Rights Navi Pillay noted the potentially catastrophic consequences if farmers who have fled affected regions are unable to return in the next few days in time to plant this season's crops. As Darfur has proved, there is great potential to turn the desperation of need into a vehicle for hatred (and worse) of the other.

It sounds like something out of a horror movie. Young men are dying in droves from an unknown cause. There's a possible link to one of Monsanto's most famous herbicides (and who doesn't love a conspiracy theory about Monsanto?). In the wake of the deaths, towns are made up almost entirely of widows. Thousands of male sugar cane workers have died early deaths from kidney disease along the Pacific coast of Central America, and no one knows why (to make things more interesting, these fatalities are only happening along the Pacific). Sugar cane workers have always borne the brunt of some of the world's harshest living and working conditions in order to sweeten lives around the world, and it seems this is just another folly in a series of hardships. Once they fall ill, the men have no work and limited access to health care. Their families risk losing loved ones and bread winners; the public health systems that treat them become further over-burdened. This article piqued my interest; I want to know more. The haunting photos alone are worth a look.

Getting Better: Why Global Development is Succeeding—And How We Can Improve the World Even More, by Charles Kenney. Basic Books, December 4, 2012.

That the incomes of the world’s rich and poor are diverging is undeniable, but this is only part of the story. Income, as economists are trained to forget, is just one narrow indicator of wellbeing. In this short and heartening book, Dr. Charles Kenney, a development economist on leave from the World Bank, invites us to look to almost any other measure—life expectancy, education, civil rights, gender equality, etc.—and marvel at how much progress our species has made in the preceding half-century. It is worth remembering that not long ago more than half the world’s population lived in a chronic state of hunger, making do without sufficient daily calories, and that today that figure is less than ten percent. Let us recall also that the global community has eradicated smallpox and made dramatic advances against diseases like measles and river blindness. And let us celebrate, too, the fact that this morning some 90 percent of the world’s children will attend school, up from less than 50 percent in 1950.

Is paranoia a style? A delusion? A cover for self-destructive behavior? Or simply a legitimate response to the contemporary life? Besner considers all these in her nuanced consideration of conspiracy theories and the people who devote their lives to them. She offers a glimpse into the Canadian literary scene by focusing on John-James Ford, an award-winning novelist who has been increasingly concerned with government conspiracies and the dangers of fluoride. Besner's account is especially important in a time when the line between paranoia and common sense seems more blurred than ever.