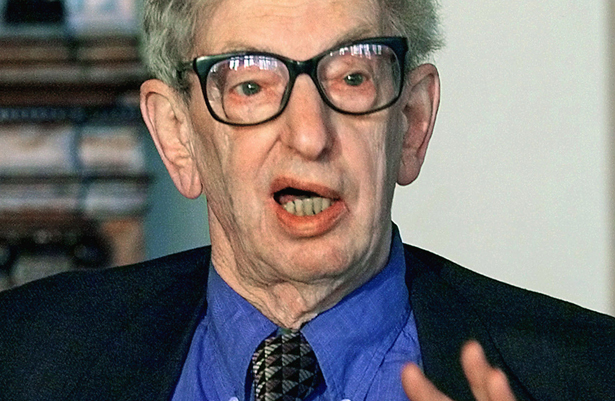 The next issue of The Nation, available Thursday, contains a remarkable essay by historian and Gandhi biographer Ramachandra Guha about the late Eric Hobsbawm, whose posthumous essay collection Fractured Times: Culture and Society in the Twentieth Century was published earlier this year. Shortly after Hobsbawm’s death last October, at the age of 95, Nation editorial board member Eric Foner celebrated Hobsbawm in our pages as a man whose “life and writings will long serve as an inspiration to those who believe that a knowledge of history is essential to understanding the current world, and to the struggle to create a better one.”

Hobsbawm himself first wrote for The Nation in 1965, with an essay that the magazine’s editors wrote “should be required reading in the White House and in the Pentagon.” In “Goliath and the Guerilla: The Pentagon’s Dilemma” (July 19, 1965), a sweeping study of the history and strategic nuances of guerilla warfare and Western military attempts to suppress it, Hobsbawm argued, even at that relatively early date, that the United States could not possibly win a war in Vietnam. He urged recognition of this reality and presciently warned of the consequences of ignoring it:

In orthodox warfare the purpose of indiscriminate mass destruction is to break the morale of population and government, and to destroy the industrial and administrative base on which any orthodox war effort must rest. Neither task is as easy in guerilla war, because there are hardly any cities, factories, communications or other installations to destroy, and nothing like the vulnerable central administration machine of an advanced state. On the other hand, more modest success may pay off. If terror convinces even a single area to withhold support from the guerillas, and thus to drive them elsewhere, this is a net gain for the anti-guerillas. So the temptation to go on bombing and burning at random is irresistible, especially for countries like the United States which could stripe the entire surface of South Vietnam of life, without dipping too deeply into its supply of armaments or money….

Having three times as many nuclear bombs as the rest of the world is very impressive, but it will not stop people from making revolutions of which Mr. McGeorge Bundy disapproves…If the United States can come to terms with the realities of Southeast Asia, it will find itself very much where it was before—the most formidable power in the world, whose position and influence nobody wants to challenge, if only because nobody can, but which, like all other powers, past and present, must live in a world it does not altogether like.

His next contribution to The Nation was on a very different topic: the philosophy of Antonio Gramsci, on whose contributions to leftist politics and thought no Nation writer had yet written, even thirty years after his death. Much of what Hobsbawm celebrated in Gramsci could with few changes be said of Hobsbawm himself, not least the claim that Gramsci’s “analysis led him into a variety of remarkable insights into the way in which political societies operate, the function of culture and intellectuals within them, and the development of his own nation.”

Just one month before the official dissolution of the Soviet Union, Hobsbawm published an essay in The Nation titled “The Perils of the New Nationalism” (November 4, 1991). Hobsbawm expressed sympathy with the many nationalist movements erupting in the wake of the Cold War, noting that they helped people cope with the “insecurity and disorientation” caused by the disruptions of the twentieth century. But Hobsbawm argued that such movements should not be confused with movements for real independence from the major political powers and economic forces which continued to dominate the world.

Is it an accident that Quebec separatism as a serious political factor emerged at the end of a decade when a traditional, Catholic, pious and clerical community that had preserved the values of seventeenth-century French peasants suddenly gave way to a society in which people no longer went to church and the birthrate fell almost vertically? After two generations, when continents of peasants have become continents of city dwellers, when the relations between the generations, and increasingly between the sexes, have been transformed and past wisdom seems irrelevant to present problems, the world is full of people who long for something that still looks like an old, and unchallengeable, certainty. It is not surprising that at such times they turn to group identity, of which national identity is one form, or that the demand for a political unit exclusively for the members of the group, in the form of ethnic-linguistic nation-states, once again comes to the fore.

However, if we can understand the forces that lead to a revival of the political of national consciousness, and even sympathize with the feelings that inspire it, let us have no illusions. Adding another few dozen to the member-states of the UN will not give any of them any more control over their affairs than they had before they became independent. It will not solve or diminish the problems of cultural or any other autonomy in the world, any more than it did in 1919.

Establishing nation-states on the post-World War I model is not necessarily a recipe for disaster. Among the potential new nation-states there may well be one or two future Netherlands and Switzerlands, bastions of tolerance, democracy and civilization. But who, looking at Serbia and Croatia, at Slovakia and Lithuania, at Georgia, Quebec and the rest, would today expect many of the newly separated nation-states to go that way? Any who would expect a Europe of such new states to be a zone of peace?

The beginning of the Bosnian War was only a few months away.

Ramachandra Guha’s essay in next week’s issue is only the latest in a long line of critical appreciations of Hobsbawm’s work to be published in The Nation. In 1966, the historian R.K. Webb reviewed Primitive Rebels, Hobsbawm’s classic study of rural bandits as a “pre-historic social movement,” first published in 1959. “A gadfly darts, stings and usually escapes,” Webb wrote. “So Hobsbawm has darted from subject to subject—happily infusing life, not drawing it—and has artfully dodged most of the attacks on him to return again…or to goad another placid subject into agitation.” In a 1985 review of Workers: Worlds of Labor, the Yale historian David Montgomery wrote that Hobsbawm’s “penetrating social analysis and his systematic rejection of intellectual fads provide lessons of special importance” at a time “when the ideological fashion is a mummified celebration of ‘the market’ and ‘modernity.’ ” Three years later, upon publication of The Age of Empire, 1875–1914, the third installment of Hobsbawm’s history of the “long nineteenth century,” Hobsbawm’s fellow historian of British labor history, Geoffrey Field of SUNY Purchase, wrote:

For forty years Eric Hobsbawm’s polymathic brilliance has enriched the study of modern history. Few historians anywhere have played such a seminal role in so many debates; few have wider interests…Reading Hobsbawm or hearing him speak, one is struck by the same characteristic qualities: remarkable factual command, lucid analysis, a conviction that theory—in his case Marxist theory—and politics are inseparable form the practice of history, and a refreshingly old-fashioned belief that a historical perspective is vital to understanding the world we inhabit.

Perhaps the best tribute to Hobsbawm—and the most poignant reflection on what the world would lose, nine years later, with the silencing of his pen—was written by the literary critic Terry Eagleton in his 2003 Nation review of Hobsbawm’s autobiography, Interesting Times: A Twentieth-Century Life.

He is a historian of formidable influence, erudition and stylistic grace; a public figure feted from Bologna to Beijing, yet a man skilled in the subtle arts of personal friendship; a politico who has survived the most bloodstained century known to humanity, yet who has managed to relish his life in the process. He still retains his insatiable energy for parties, debate, travel and ideas.

Interesting Times concludes on a sobering note. Hobsbawm is fond of the United States, but glad that he and his children do not live in a society that acknowledges no limits on its willingness to use its strength. The twenty-first century, he observed, ‘opens on twilight and obscurity.’ It is greatly to our loss that we shall not have his wisdom to guide us through it.