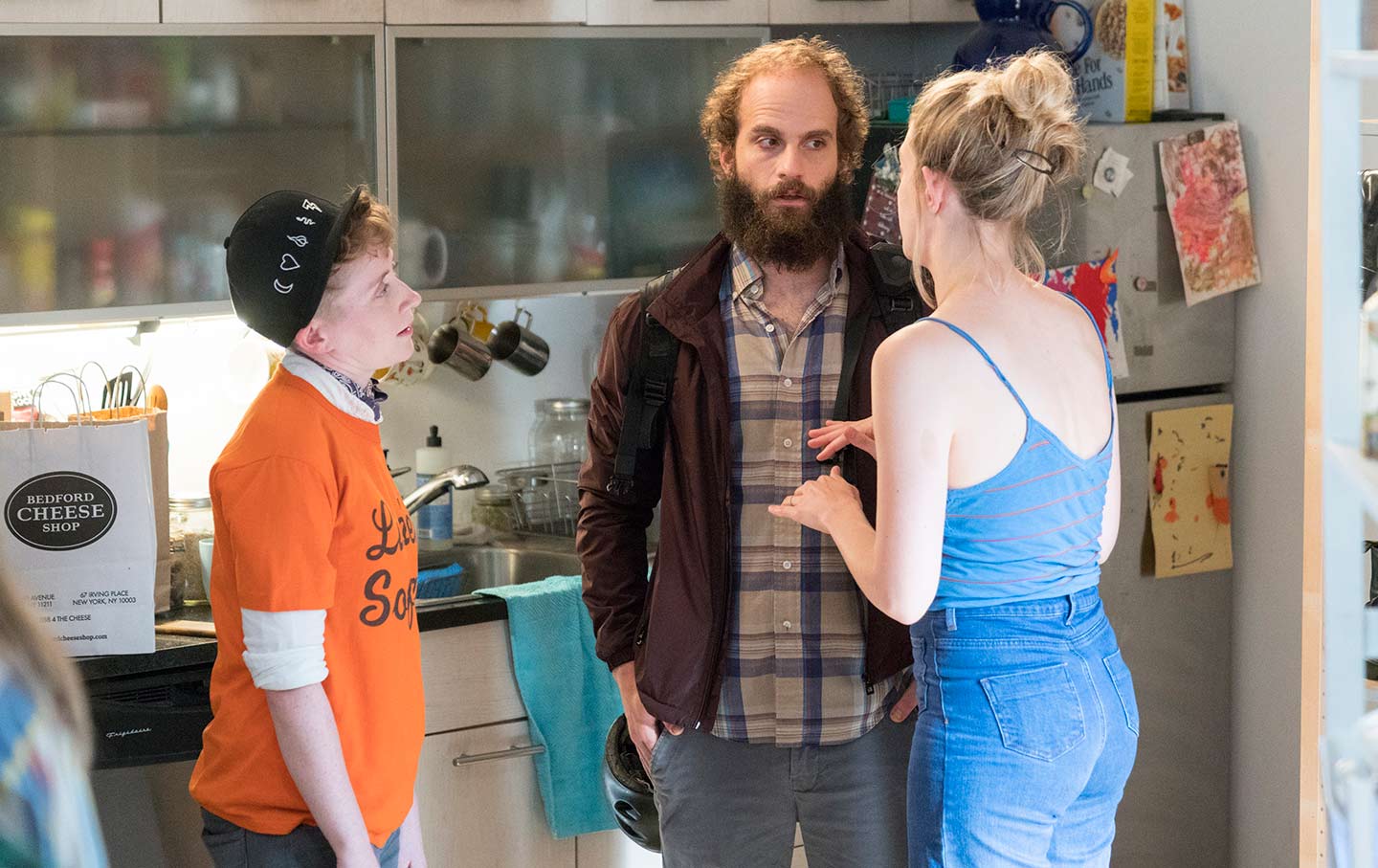 The HBO version of High Maintenance began with a minor adjustment. In the premiere, we met The Guy, a mellow, nameless New Yorker who bikes around the city delivering weed, as he consulted with his old-school barber. “I’m thinking just a little off the top,” he said. “Nothing too drastic.”

The exchange served as a subtle message to fans of the original Web series: Yes, High Maintenance creators Katja Blichfeld and Ben Sinclair (a husband-and-wife team until they split on election night 2016) had brought their short-form Vimeo sensation to premium cable. But, aside from the expanded, half-hour format, the show would remain essentially the same. Blichfeld and Sinclair, who also stars as The Guy, kept that promise. The first season offered a familiar collage of cannabis enthusiasts, from a social-media-addicted extrovert to an agoraphobic man who makes art with LaCroix cans, all portrayed with remarkable empathy.

The Guy is back in the barber’s chair in the opening scene of Season 2, but this time something drastic does happen. He requests “the usual” but from a new hairdresser, while a dance party rages in a back room and a man digs through a catering tray of spaghetti, and what he gets is his signature beard shorn off. This is, of course, a nightmare. Even so, when The Guy and his girlfriend, Beth (Yael Stone), wake up and check their phones, they find that the real world has suddenly become as surreal as the dream. “Oh shit. Something bad happened,” says Beth. Then she loads up her bong.

Welcome to New York in the Trump era, where a DJ spins house music while the things that make the locals who they are keep getting torn from them. No other TV series captures daily life in the city like High Maintenance, which profiles so many of its residents, and from so many different communities, without judgment. It survived the move to HBO intact, only to be diverted from “the usual” by the chaos that took hold after its first season ended in October of 2016.

The script for the season premiere, “Globo,” elegantly avoids identifying the cataclysmic event whose aftermath dominates the episode. There are clues that it is set on the day after the election: Over mussels, a man tells his companion she’s lucky to have a British passport. At the bar where Beth works, one blowhard opines that at least comedy is going to be great for the next few years. There are also moments in the first episode when it seems like New Yorkers are responding to a terrorist attack. But it doesn’t matter whether Blichfeld and Sinclair, who wrote and directed “Globo,” are referencing the election or some fictional catastrophe or both. The confusion only highlights the sheer number of awful surprises we’ve woken up to since High Maintenance last aired. An episode that connects the show’s typical intimate character studies with glimpses of depressing birthday parties, silent subway rides, and strangers treating one another delicately becomes a panorama of collective mourning. I was not in New York on 9/11, but I’d been living there for 11 years by November 9, 2016, the day after 81 percent of New York City residents voted against Trump, and it looked and sounded just like “Globo.”

That funereal atmosphere is limited to the premiere, which ends on a note of messy, quintessentially High Maintenance transcendence in which a little boy with a balloon turns a grim subway car into a cathartic party. Still, the season takes place in a resolutely (if inconsistently) radicalized New York, where women practice yoga in T-shirts that read, “All We Ever Did Was Be Black.” In the funniest vignette from the five episodes provided to critics, the unassuming Guy’s arrival at an all-female #Resistance gathering causes a rift between those guests who feel triggered by a man’s presence and those who just want to smoke a bowl.

As that scenario suggests, Blichfeld and Sinclair are wise enough to avoid glorifying the city’s diverse, progressive inhabitants, even in 2018. A glib twist at the end of the fourth episode, “Derech,” when a drag performer saves a life, is a rare exception, but mostly we meet opportunistic reporters and rich couples who won’t share their sauna with neighbors whose rent is subsidized. With so many scenes set in the apartments of stoners, the show can’t help but register the moral complexities of life in a liberal utopia where immigrants, artists, and people of color uneasily coexist with the wealthy newcomers destined to gentrify them out of their homes. In Season 1, weed ties together a rebellious Muslim student, her strict uncle, and their polyamorous, white neighbors, who are preparing to throw an elaborate and mildly offensive Moroccan–themed dinner party. In this season, we get a black real-estate broker (played by Danielle Brooks from Orange Is the New Black) renting apartments to gentrifiers in the working-class neighborhood where she grew up.

High Maintenance has never been a polemical show, but it has always been a political show. In episodes (and webisodes) stretching back to 2012, it has introduced us to cross-dressing dads, Jewish families celebrating Passover, and meatheads who turn out to be Method actors. It’s shown us just about every kind of family—and every kind of sex. The subtle but consistent subtext is that everyone, no matter where they were born, who they love, or how they express that affection, belongs in The Guy’s New York.

The Trump regime has done a number on this city, leaving its residents even more anxious, exhausted, and economically stratified than they already were, and the new season acknowledges those burdens without letting them win. Each story line resists New York’s least favorite native son by embodying the hometown values he’s determined to destroy: multiculturalism, empathy, unapologetic weirdness. Those traits have sustained us since The Guy’s last haircut. With any luck, he’ll be back at the real barbershop soon.