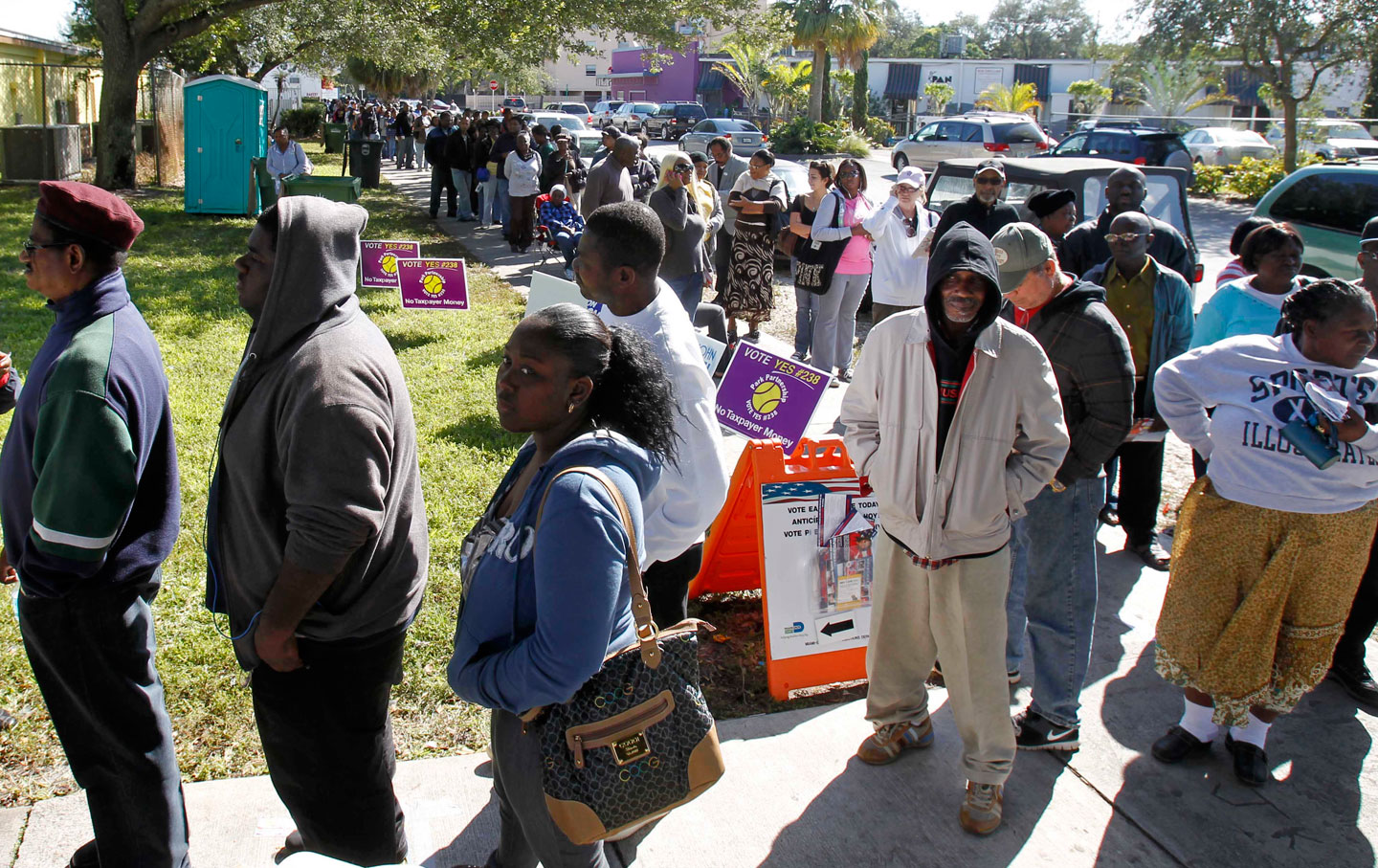 The spring of 1966 was a harrowing yet hopeful period in America’s electoral history. In March of that year, the Voting Rights Act survived a Supreme Court challenge from the attorney general of South Carolina. Civil-rights campaigners could finally breathe at least a tentative sigh of relief as public officials across the country began initial preparations for the first federal election following passage of the landmark law for which King and countless others had toiled for years.

Fast-forward 50 years, and the scene is just as harrowing, but—tragically—far less hopeful. Voter-suppression tactics in 2016 are spreading like a virus in our body politic. In the first presidential primaries since the Supreme Court gutted Section 5 of the VRA and opened the floodgates for passage of voter-suppression laws in states, the impacts are already evident. Whereas voting rights were ascendant in 1966, voter-suppression tactics are spreading in 2016. Whereas Congress was moving in the right direction in 1966, in 2016, it’s often conspicuously absent.

The challenge this year—the 50th anniversary of the implementation of the VRA—isn’t just protecting free and open access to the ballot; it is also rekindling the fire that forced federal action on voting rights. This means reigniting a national movement for restoration of the Voting Rights Act, vigorous federal enforcement of electoral rights, and a reversal of anti-democratic state voter-suppression laws. With our country at a political turning point, time is of the essence.

As The Nation’s Ari Berman and others have methodically reported, the far-right’s well orchestrated voter suppression strategy—focusing on voter ID laws, purging of voter rolls, polling place reduction, and rolling back early voting requirements—has actually resulted in a rekindling of Americans’ 1960s-style resolve in defense of the right to vote. Look at Aracely Calderon, a naturalized citizen from Guatemala, who stood at the back of a 700-person, four-block line and waited five hours to vote in the Arizona primary. Or Dennis Hatten, an African-American Marine veteran, who endured seemingly endless bureaucratic hurdles to get a Wisconsin photo ID after being told his other forms of identification—including a veteran’s ID—were insufficient under that state’s new draconian voter-ID law. There is no shortage of courage and grit in the face of these abuses.

However, we need more than individual resolve to overcome the systemic injustice of voter suppression. We need a broad-based movement for legislative change. Many voter-ID laws—which 36 states have now enacted in varying forms—will have their first test in the 2016 general election. An analysis by Nate Silver for The New York Times shows that these laws can decrease turnout by between between 0.8 and 2.4 percent—a potentially decisive amount in highly competitive elections. Other academic research supports anecdotal findings that voter-ID laws have disproportionate impacts on minorities and immigrants, expanding the participation gap between white and nonwhite members of the electorate.

The time has come to translate widespread outrage about voter suppression into momentum for an actionable voting-rights agenda. The first step is building awareness of the legislative fixes that are available right now.

In the immediate aftermath of the Supreme Court’s disastrous Shelby ruling—which paved the way for widespread state voter suppression by eliminating the requirement that jurisdictions with histories of discrimination obtain Department of Justice preclearance for any changes to voting laws—there was hope that Congress would act to mitigate the damage. Then-House majority leader Eric Cantor traveled to Selma with Representative John Lewis’s civil-rights pilgrimage and declared his intention to find a bipartisan solution. Unfortunately, in the wake of Cantor’s departure, the Republican Congress has balked at even discussing the issue. Both the bipartisan Voting Rights Amendments Act, HR 885, and the Voting Rights Advancement Act, HR 2867, are viable options for Congress to turn the tide against state-based voter suppression tactics. While not a panacea, these proposed post-Shelby VRA fixes would help end voter-access crises of the kind already on display in Arizona, North Carolina, and elsewhere by restoring the preclearence requirement in up to 13 states.

Voter protection is just the start of a legislative agenda for election integrity–which must also address issues like modernization of voting machines, absentee balloting, willful misinformation, felon disenfranchisement, partisan election administration, untrained election staff, and many others. On April 21, we’ll be participating in a special briefing on Capitol Hill—including the Rev. William Barber, Ari Berman, and others—to draw attention to the crisis of election integrity and to identify policy options for restoring our democratic institutions. This is the first of a series of efforts to bring the rising passion for voter protection to the halls of Congress.

The cause of voter protection is unique in that it can unite people from across the disparate areas of the progressive movement. Whether someone cares most about civil rights, campaign finance, climate change, reproductive rights, or global peace—fair and transparent elections are an absolute requirement for success. Election protection demands a fusion movement.

We’ve seen what happens when people are mobilized and organized in strategic action to defend the right to vote. Though African Americans were nearly absent from voter rolls in the deep south in the early 1960s, by late 1966, just four of the traditional 13 Southern states had African-American voter-registration levels under 50 percent. By 1968, even Mississippi had a 59 percent registration rate among African Americans. That progress was directly attributable to an indefatigable people’s movement that achieved tangible legislative change.

This year, voting-rights advocates are rightfully rushing to address the short-term barriers to the ballot box—getting people the required IDs, ensuring the presence of adequate polling sites, and protecting people from being purged from voter rolls. This is essential work. But we must also seize this moment and build broad momentum for a long-term election integrity agenda that can take hold in municipal buildings, in statehouses, and on Capitol Hill.