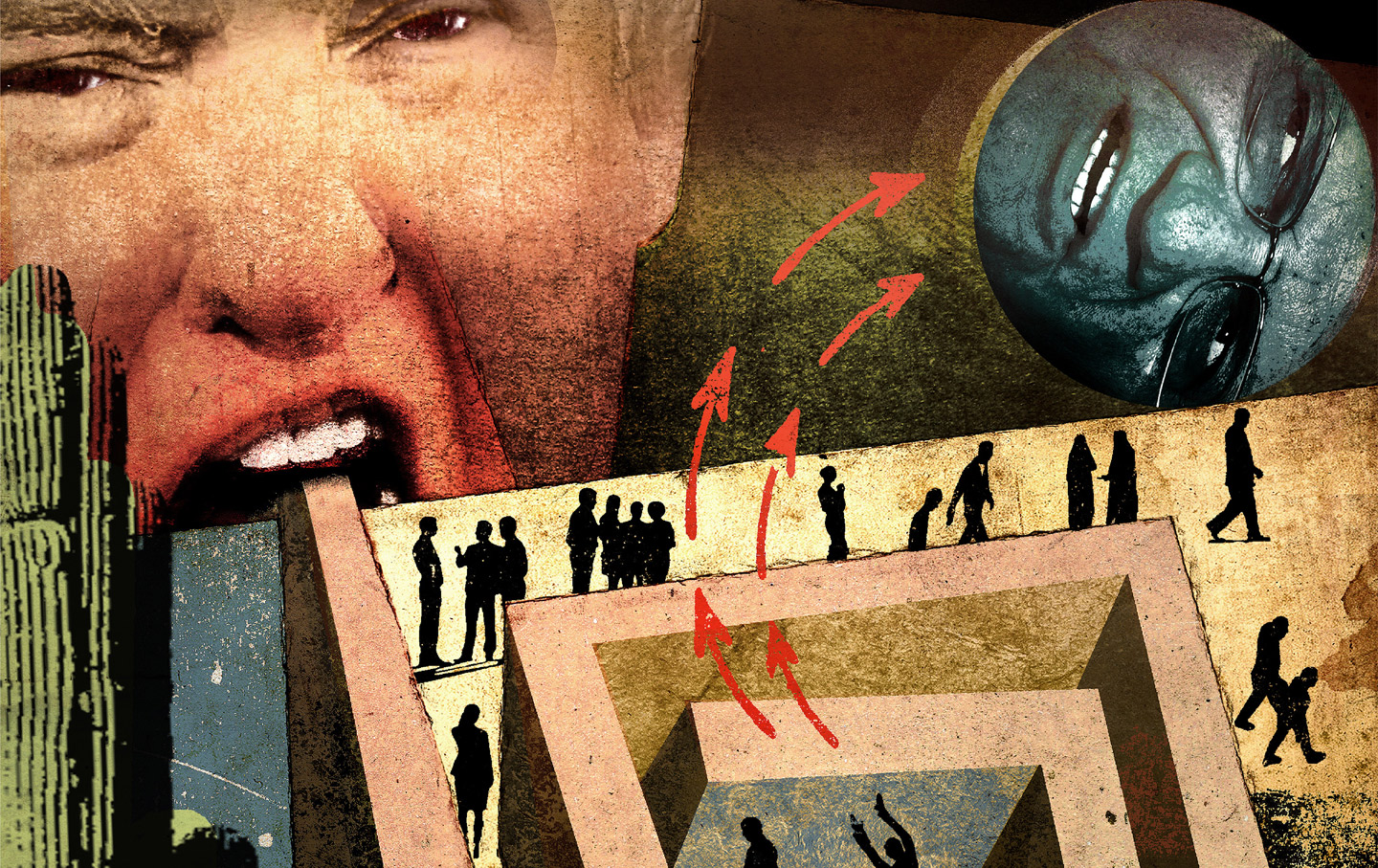 Phoenix—The morning after the election, Abril Gallardo was driving down the streets of Phoenix to the Maricopa County Sheriff’s Office for a celebration. Gallardo, 26, was a lead organizer of Bazta Arpaio, a campaign to unseat the county’s notorious sheriff, Joe Arpaio, after 23 years in office. Bazta Arpaio was successful, and organizers and activists were gathering for a press conference.

Gallardo is a beneficiary of President Obama’s single and most successful pro-immigrant initiative, Deferred Action for Childhood Arrivals (DACA). The program gives young people who immigrated to the United States as the children of undocumented parents a short-term protection from deportation. It also gives Dreamers, as people like Gallardo are often called, work permits and the authorization to drive. President-elect Donald Trump has vowed to end the program, and he’ll have the authority to do just that.

Gallardo’s DACA status is up for renewal in December. She’s been gearing up to transfer to Arizona State University in January. “The first thing I did when I got DACA [four years ago] was, I went back to school,” Ga­llardo said. She enrolled at Phoenix Community College and will get her associate’s degree in December. Now she’s all set to make the big jump to the state school.

“But right now,” she said, her voice shaking, “I don’t even know if… if that’s even going to be possible.”

DACA has allowed undocumented young people like Gallardo, who otherwise are counted as international students, to be counted as residents of their home states and thus to pay in-state tuition, which can be as much as one-third to one-half of what they would otherwise pay. Some 700,000 undocumented immigrants across the country have taken advantage of the program. Though narrow and short-term, it has been a lifeline for Ga­llardo and others like her. And in the past four years, she hasn’t just been going to school; she’s been working, and saving.

“We were super-excited because, in December, I was going to start my process to become a homeowner,” Gallardo said. She had plans to call brokers and review her savings and her credit score with them. She wanted to buy a home for her parents, who are also undocumented. “But now that all might change.” As we spoke, Gallardo wiped away a steady flow of tears. “Despite the fact that I’m not going to be able to go to school, the fear that my family could be separated is bigger than all of that.”

Gallardo is hardly alone in her fears. This is where so many of the people who were targets of Donald Trump’s xenophobic, misogynistic, downright racist campaign now find themselves: in the crosshairs and feeling not just vulnerable, but targeted.

“If Trump was able to insult my community in public, I’m scared of what his supporters can do when they’re next to me.” —Abril Gallardo

One of the most visceral reactions I encountered, in the hours after it had become clear that Trump had won the presidency, was from the activist and writer Tanzila Ahmed, who is a South Asian Muslim. “For all my Muslims, all my Browns, all my AMEMSA [Arab, Middle Eastern, Muslim, and South Asian] folx—please create a SAFETY PLAN, right now,” Ahmed wrote on her Facebook page. “Emergency numbers, cash on hand, phone charged, look over your shoulders—this is not a drill.”

In the days just before the election, Ahmed stressed, a white man in Southern California had been arrested for plotting a “Columbine-type” attack on an area mosque, in the words of a local Muslim leader. He’s out on bail right now. For Ahmed and Gallardo, a Trump presidency means the likelihood that he will follow through on his proposals to deport all undocumented immigrants and subject Muslims entering the country to “extreme vetting.” But it also means something deeper.

“Because if Trump was able to insult my community in public, I’m scared of what his supporters can do to my family when they’re next to me,” Gallardo said. And in the hours after Trump’s victory, I had already begun to hear reports of parents dropping off their kids at schools with racial epithets spray-painted on the doors; of people walking down the street and hearing a pedestrian whisper, “Get out”; of women getting their hijabs torn off. Maybe these incidents are unrelated to the election—this is, after all, the country we’ve lived in for some time. But if the president-elect can make flagrantly racist and demeaning statements about Muslims and people of color, what’s stopping your next-door neighbor from repeating them—or acting on that animus?

For Ahmed, this new reality means that it’s time to get serious about survival. She’s been urging Muslims to make sure they have a go-to plan for protecting themselves and their families against harassment and even violence. But what would such a plan involve? Among other things, “be alert on knowing your rights,” Ahmed told me. “But we’ve been doing all this since 2001.”

“I don’t know how to stay safely away from racism,” she added.

Arizona is an interesting place from which to survey this new chapter of American history. The state has seen fit to eliminate 212 polling places after the Supreme Court gutted the Voting Rights Act. Thirty-three of them were in Maricopa County, the most populous in the state and the home of Joe Arpaio. And yet, after a 23-year career of targeting Latinos with raids, incarcerating people in tent cities, and proudly demeaning undocumented immigrants as well as anybody who might be confused with one, the sheriff who’d become “a symbol of hatred toward our community,” as Carlos Garcia, executive director of the grassroots Puente Human Rights Movement put it, finally faced a successful uprising in 2016.

In recent years, Arpaio has been hit by scandals stemming from his immigration-enforcement tactics. He was charged one week before the election with criminal contempt of court for ignoring a judge’s orders in a case that centered on his racial profiling. When Arpaio first won the office, he received 83 percent of the vote; in 2012, his last successful bid, he won just over 50 percent, said Mary Rose Wilcox, a former Maricopa County supervisor. “People are sick of him—sick of him wasting taxpayer money, sick of his lawsuits, sick of him going after people,” she added.

Bazta Arpaio decided to capitalize on that moment. The campaign organized Maricopa County Latinos—and not just those who could vote. On Election Day, hundreds of students from two high schools in Phoenix’s Latino-heavy Maryvale neighborhood walked out of school to protest Arpaio. They marched about a mile to a local polling place and stood across the street. Most of them were under 18 and ineligible to vote.

Stephanie Aguilar, a 22-year-old undocumented immigrant who volunteered with the Bazta Arpaio campaign, stayed until after 7 pm, when the polling place closed. She passed out water and chips to the roughly 100 people in line, urging them to keep waiting and to vote.

Aguilar has lived in Arizona since she was 5 years old, and so she’s never known a county sheriff other than Arpaio. In 2010, when then-Governor Jan Brewer signed SB 1070—at the time, the nation’s harshest anti-immigrant law, and a preview of the kind of enforcement Trump vows to implement as president—Aguilar made a plan with her mom.

“In 2010, we decided: If we don’t have to go out [of the house], we don’t go out,” she told me. “If we can survive on a dozen eggs for the next week, we don’t have to go to the grocery store.” All of their movements and choices were governed by the daily fear that immigration-­enforcement agents could arrest and separate them at any moment.

We spoke the day after the election. With just a few hours to reflect on the news, the shock of Trump’s victory had barely settled in, but Aguilar was buoyed by Arpaio’s ouster. She said that now, six years later, survival looks different to her: Fear isn’t the answer. “I think that’s just going to make people feel a lot smaller than they are.

“There’s no telling anyone how to be safe,” she added. “But I wouldn’t want to tell someone to stay home and not go about their lives, because that’s not what we want…. We have to come out and say, ‘We are here. I am here. I am not leaving.’”